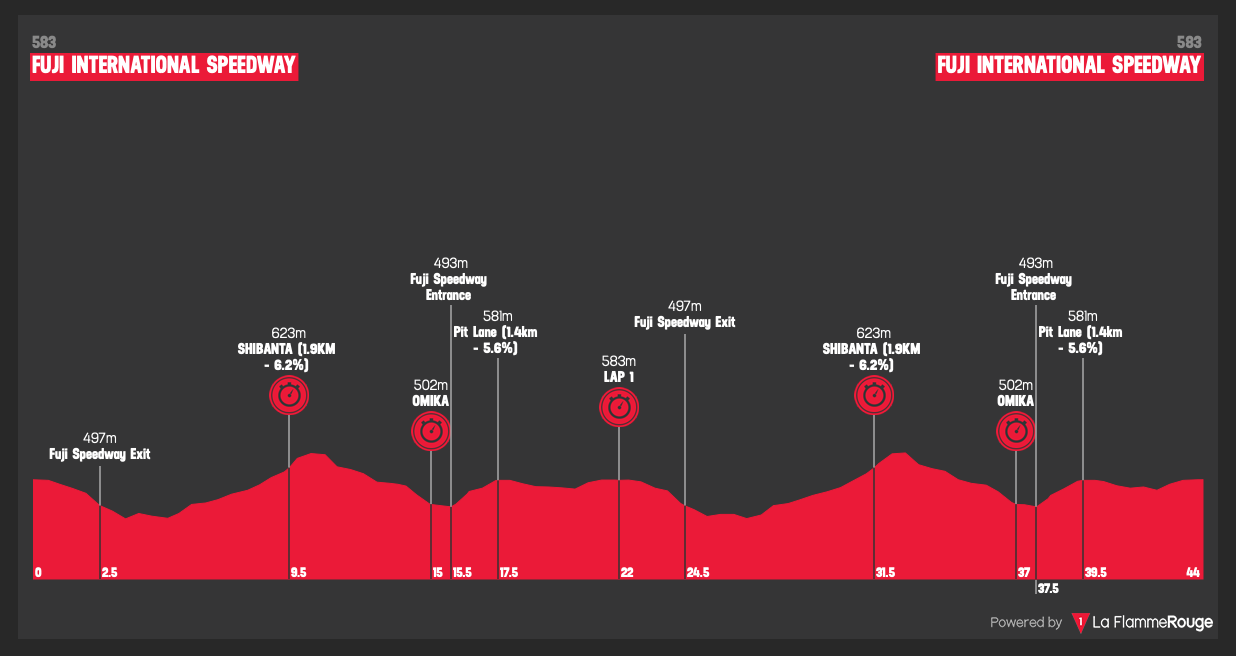 A hilly TT, but still one for the specialists.

We have 44km and 769m of elevation. This makes it a tough route, but not mountainous. We have two laps of the circuit which features one climb, I’m not sure it’s as hard as some are making out.

5.4km at 4%, but it’s just the final 500m that’s really hard. The big TT riders will expect to smash up here as fast as the lighter riders.

We saw in the road races the lap around the speedway circuit isn’t flat, it contains a few little kickers that test the legs.

Cloudy, with a relatively weak wind. There is a definite chance of rain throughout the day, those dark clouds could burst and have a massive impact on the outcome of the race.

Wout Van Aert – three wins in the Tour de France and silver men in the road race, the Belgian is currently enjoying a period of incredible form. The lumpy route is good for him, but I think he would have preferred an even more challenging course. He was frustrated by how others rode on Saturday, but he doesn’t have to worry about that on his TT bike. This is a simple battle against the clock, it’s up to him, no one else. Given his current form he’ll start as the favourite.

Filippo Ganna – some will say this route is too hard for the Italian, but I disagree. Of course, he’d prefer a flat circuit, but the hills in this one won’t scare him. At the start of the season, he looked unbeatable on his TT bike, but he then suffered a little dip in form, but returned to his very best at the Giro. If anyone can beat Van Aert it’s him.

Remco Evenepoel – disappointed in the road race, but that won’t have an impact on this race. In his short professional career Remco has produced some stunning TT efforts, but he recently lost in the Belgian national championships. As always, he starts with a huge amount of pressure on his shoulders, we’ll see if he can produce another one of those stunning performances.

Stefan Küng – he was devastated not to win one of the TTs in the Tour, but he’ll use that as motivation to get a big result here. He’s one of the few riders who won’t mind if it rains, he’s amazing in wet conditions. The punchy route is a good one for the Suisse rider, he usually goes well in a TT like this. Winning might be hard, but a medal is within his grasp.

Rohan Dennis – this year we’ve seen him return to his best on his TT bike taking wins in Catalunya and Romandie, but he wasn’t at his best in the Tour de Suisse. Dennis is a unique athlete, when he sets his sights on a target he rarely disappoints. His single-minded determination is one of his main strengths, he’ll be expecting to win gold.

Primož Roglič – he suffered from back cramps during the road race, that ruined his hopes of winning a medal. On paper this is a good TT for the Slovenian, he’ll like the rolling nature of the route.

Kasper Asgreen – second in the final TT in the Tour de France, the Dane is an outside contender for a medal. He might not have the same noise around him compared to the bigger names, but that seems to suit him fine. He’ll fly under the radar, but don’t underestimate him.

Brandon McNulty – the American was brilliant in the road race; his performance was stunning. His TT performances this season have been very consistent, apart from the Tour de France. He’s yet to win a TT as a professional, but it wouldn’t surprise me to see him on the podium at the end of the day.

Remi Cavagna – if I’m saying the route isn’t as hard as it seems then the TGV must be included as one of the contenders. He should have won the final TT in the Giro but crashed in the final corner. This year we’ve seen Remi getting that first big win on his TT bike, it really wouldn’t be a surprise to see him pulling something out of the bag.

Tom Dumoulin – his lack of racing will surely cost him; I don’t see him getting a medal.

Given his current form the gold medal will be around the neck of Wout Van Aert at the end of the day.