Into France and the cycling-loving region of Bretagne. It’s a hilly classic and one that is frequently used as preparation for the World championships, the race carries a lot of history and it will remain one of the most important late-season classics. 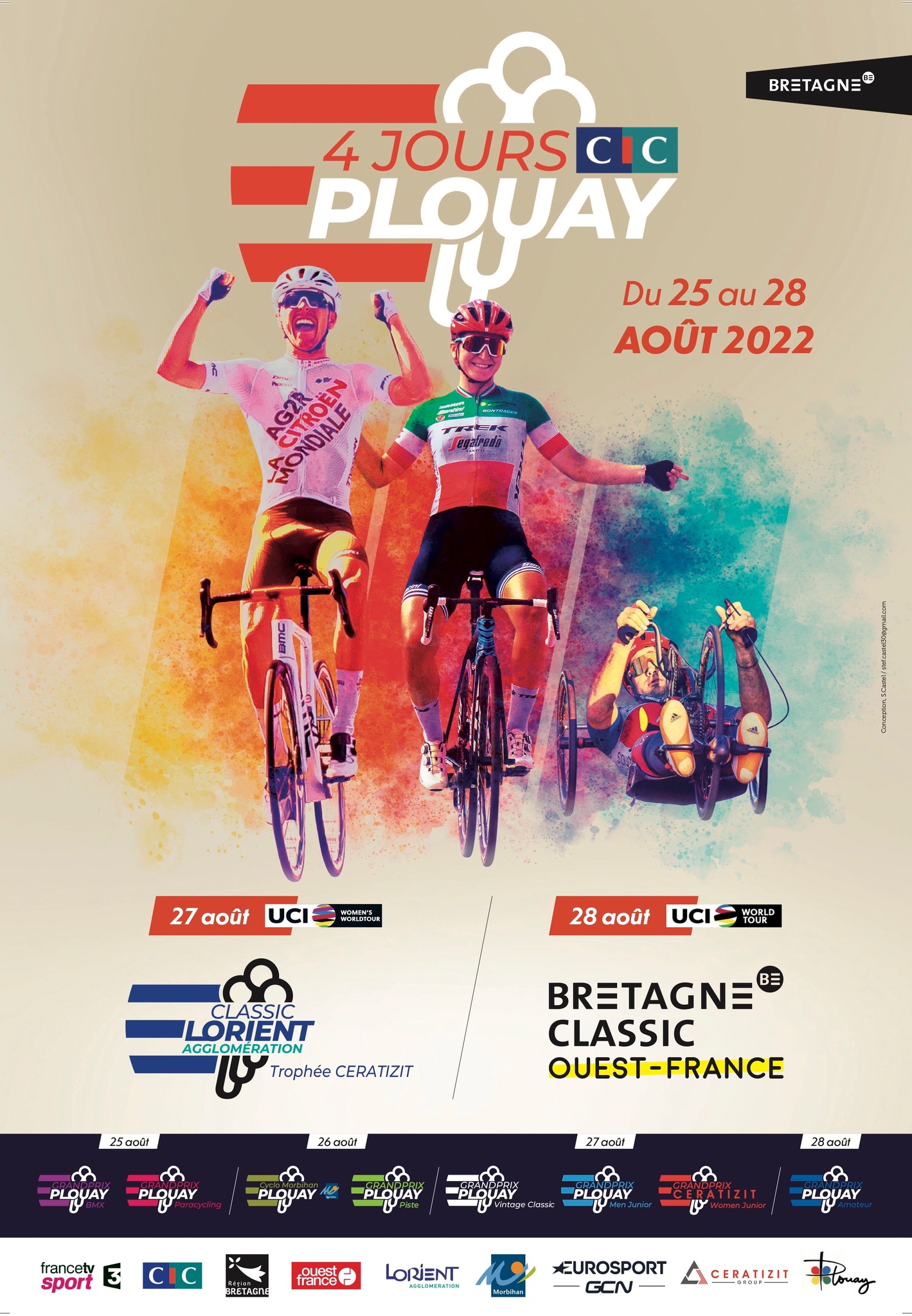 There will be 256 kilometers on the menu which will make for a very complicated race towards the end – where this year, the action will be densely packed. There have been years where the race has finished in a reduced bunch sprint, but the route this time around is very favourable to the classics specialists and aggressive racing. There are 3000 meters of climbing to tackle, with a small hilltop right at the start, and a few gravel sectors with 80 and 54 kilometers to go which will see some tense moments and likely some early attacks as the narrow roads and explosive terrain can cause tension. 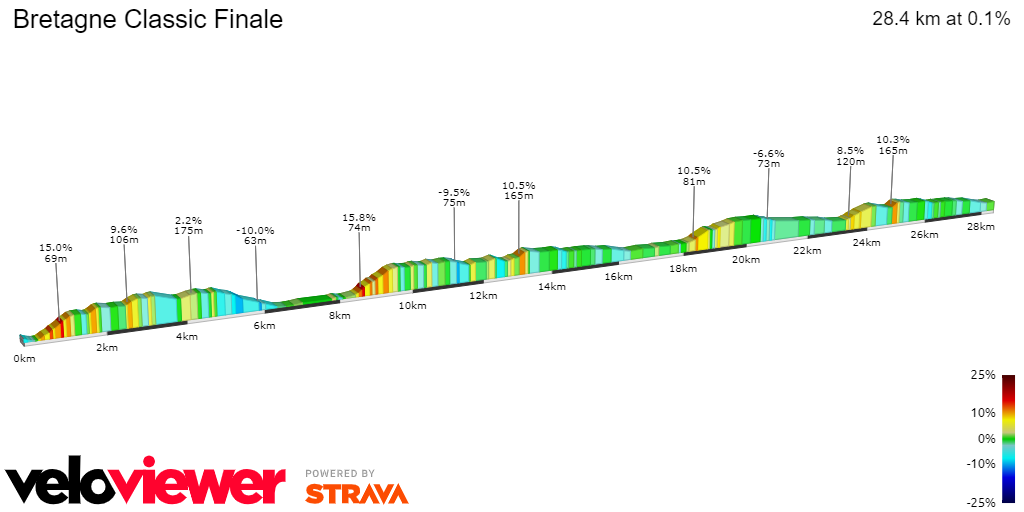 This year however most of the race’s difficulties are packed into the last 30 kilometers. These will be highly difficult, with several small hilltops, fast sections and narrow roads to tackle. Marta (900 meters; 8.3%; 27.5Km to go) will be the hardest and the first of the ascents, which should see a furious battle for positioning, and many attacks over the top. On such terrain it is very hard to chase, so whoever gets a gap ahead won’t be easy to bring back. There will be a small plateau and descent before Longeo (1.5Km; 5.7%; 19Km to go) which sees gradients up to 15% and is the longest of the ascents, where those who won’t enjoy the climbs are likely to struggle.

A small plateau will follow and then there’ll be a sharp ramp at Kenlucas (400 meters; 5.5%; 15Km to go) which will be aswell the final climb of the day, and the riders will be able to see the finale perfectly as they cross the line with only 12 kilometers to go.

The race won’t end there however as quickly the riders will face Rostervel (1.2Km; 4.6%; 9Km to go), a straightforward climb out of Plouay, but then the riders descent back into the into town and climb out via Le Lezot (900 meters; 4.6%; 4.5Km to go) and Kenlucas (400 meters; 5.5%; 3.5Km to go) for a final time, before the fast run-in to the line where the sprint will feature some smooth gradients. 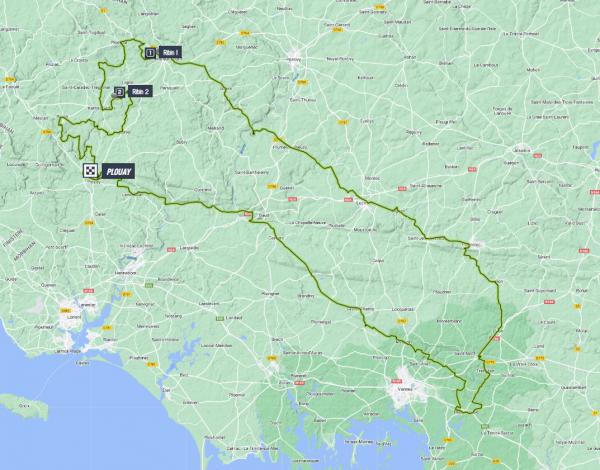 Normal temperatures and a northeastern breeze. It will be strong enough to be felt, but inside the final kilometers there will be countless changes of direction, which will make it difficult for the wind to truly affect the race.

Wout van Aert – Growing towards the Worlds, van Aert has shown good form last week already at the BEMER Cyclassics. This race he will be the man to beat, but in such a race it is likely that it will bad for him as it’s not very selective and many will look at him to do a lot of work towards the end. Van Aert has to attack early and hope to form a small and cooperative group if he wants to win, but in reality he is the best suited for this race.

Tadej Pogacar – Back from racing after Clasica San Sebastian where he did not finish the race. After this Tour I feel more of a human feeling from Pogacar, not anymore someone unbeatable as he’s shown earlier in the season. Will he have his best form here? Unlikely, but his power should make him a main favourite, as an aggressive rider he can mark the race, and in a sprint he also packs a good punch.

Groupama – The French team come very stacked into the classic, with weapons for several terrains. Arnaud Démare will be a very dangerous rider in his current form in a possible sprint, Stefan Küng will be incredibly hard to bring back if he finds himself in front, and the likes of Valentin Madouas and David Gaudu should be able to cover and attack on the climbs. They can make something good out of their depth.

Quick-Step – Zdenek Stybar has been showing great form lately and he’ll be a big weapon, but Quick-Step also feature pure puncheurs such as Mauro Schmid, Andrea Bagioli and Mikkel Honoré in their lineup. They have cards to play, with Davide Ballerini also an option for a sprint if he finds his best legs.

Israel – In need of UCI points, Israel come stacked with quality riders. Giacomo Nizzolo is the type of sprinter who can frequently perform in this type of classic, however it won’t be easy for him to survive on current form. The team have several puncheurs and classics riders who can be in big moves however, mainly represented by Jakob Fuglsang, Dylan Teuns and Simon Clarke.

Cofidis – Cofidis lack the option for a sprint, however Axel Zingle may surprise taking into consideration what he’s been showing this year, still as an underdog. The team are in search of points and they bring Guillaume Martin and Ion Izagirre who may not be the best suited for such terrain but are wildcards, and another dangerous rider in Benjamin Thomas.

On the classics specialists’ side you will see the likes of pure puncheurs such as defending champion Benoit Cosnefroy, Jhonatan Narvaez, Gonzalo Serrano, Warren Barguil, Frank Bonnamour and Mathieu Burgaudeau who will be very well suited to the explosive and repeated efforts that will be done throughout the finale of the race.

The race winning moves often now come between climbs however where some are trying to save their legs, that’s becoming more and more common. Although some of these can climb very well in these short efforts, they will be incredibly dangerous within the technical and rolling sections. The likes of Anthony Turgis, Soren Kragh Andersen, Jan Tratnik and Victor Campenaerts.

There will be a lot of danger however in those that thrive in this type of classics, and pack a strong sprint, they will be the men to beat – or maybe some won’t think that way, since Wout van Aert is present in the race. Nevertheless Arnaud De Lie, Biniam Girmay, Magnus Cort Nielsen, Alex Aranburu, Michael Matthews and Luka Mezgec will all be strong contenders for the win and the podium spots.

This type of race will be incredibly attacked. The explosive circuit favours those who attack first and don’t have to chase, I will go with Victor Campenaerts because of his aggressive stance and incredible form this year, which includes an increase in sprint power even in case he doesn’t reach the finish alone.

Tomorrow’s race has prizes of at least €100 and an entry fee of only €2.5. Make good use of your knowledge! https://zweeler.com/game/cycling/FantasyBretagneClassicOuestFrance2022/main.php?ref=790