Alexis Vuillermoz won the second stage of the Critérium du Dauphiné after the day’s breakaway succeeded en route to Brives-Charensac. The breakaway wasn’t too threatening but a combination of lack of firepower and occasional lacks in commitment saw a group of five arrive at the finish alone, where Alexis Vuillermoz showed incredible power by closing down the early sprint of Olivier Le Gac – who finished third – and taking the win, beating Anders Skaarseth to second.

Negative: Phil Bauhaus abandoned and Dylan Groenewegen was dropped again in the climbs – another bad day for the pure sprinters.

The third stage of the Critérium du Dauphiné will give way to a different type of rider to succeed. As the race goes deep into the Massif Central, the GC riders will have to be paying attention as they may be fighting for a stage win. However the day overall isn’t quite hard and most riders should be able to get into the base of the final ascent quite comfortably.

In the final half of the stage the riders slowly climb up to a plateau of over 1000 meters in altitude, however with no specific point where the race can blow up. It will all be played out in the final ascent. 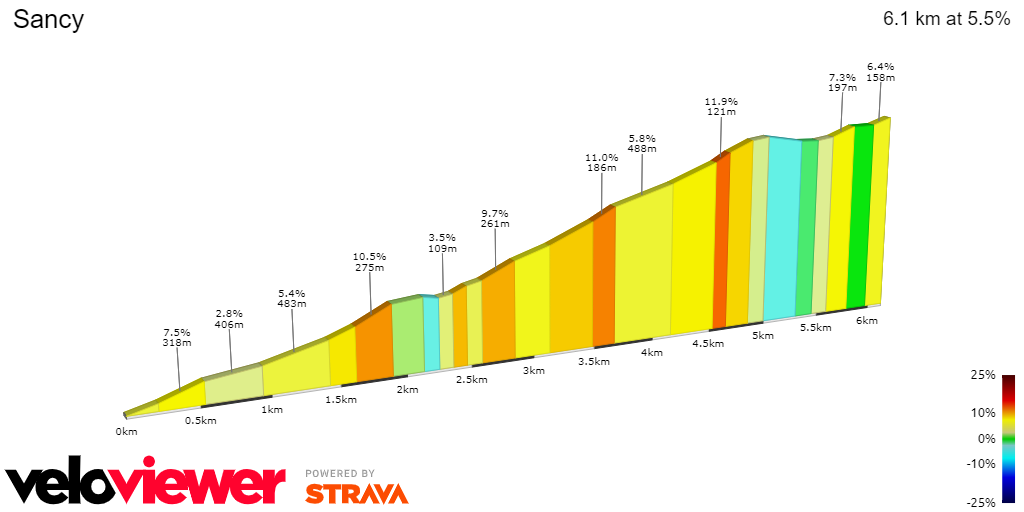 Not an unfamiliar name to some, the Sancy ski station hosts the finale of the day. In total, 6.1 kilometers at 5.5% average gradient – far from a mountain. It’s a day where puncheurs can also succeed, however attacks can come. The first five kilometers are harder than the average gradient suggests, however there are some small resting sections in the ascent. Namely, it’s final kilometer has a short descent and big-ring gradients into the finish line. 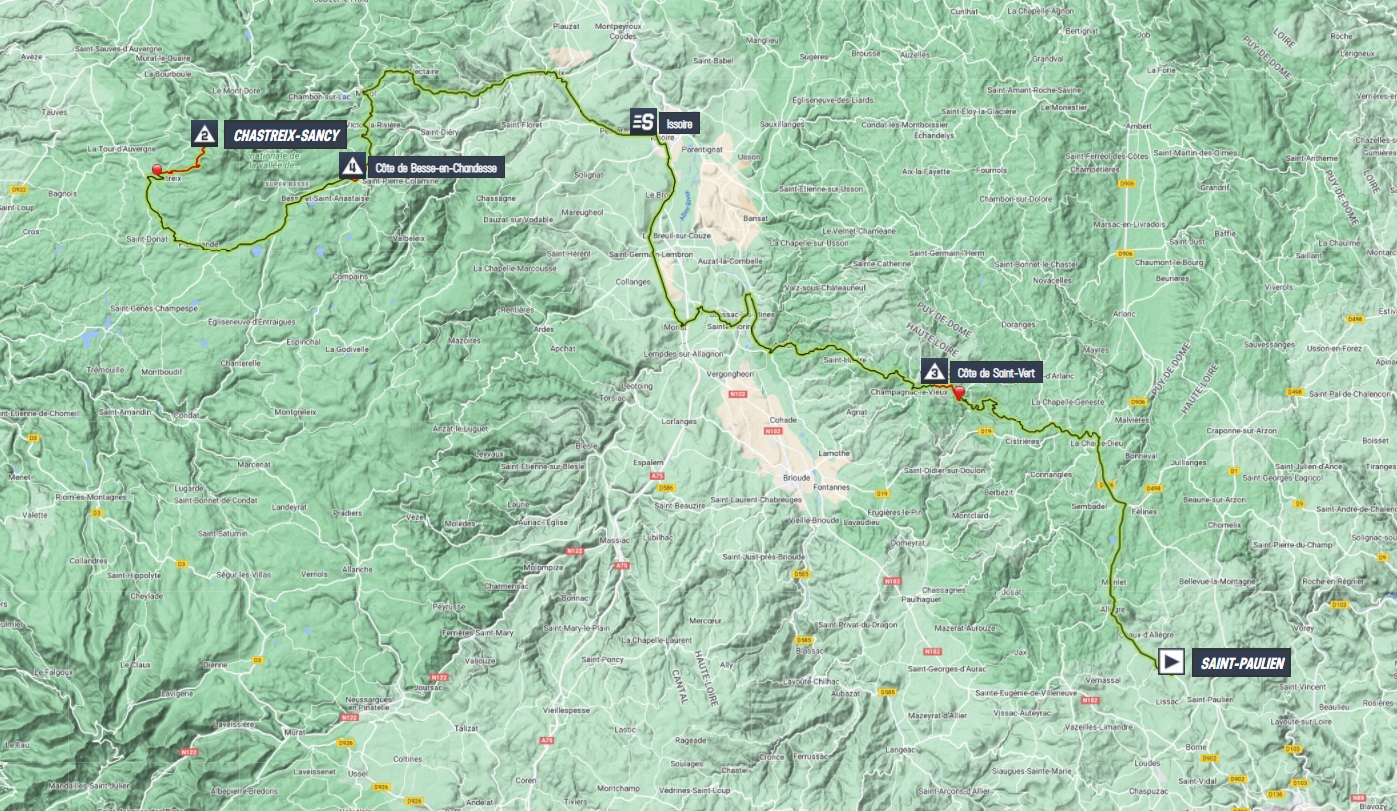 Modest eastern wind with little possibility of rain. The weather remains unstable in France, and it can affect this stage. The majority of the stage should be quite exposed, however with cross-headwind throughout most of it. However, the final ascent will see some tailwind that should be felt, and will make the final climb faster and attacks more likely to succeed.

It isn’t a bad stage for a breakaway, but not in the context of the race so far. There will be plenty of candidates for the win who will have their teams controlling the day, the start isn’t good for a strong group to form and additionally the wind won’t be favouring the escapees. A group would need around 1:30 minutes at the base of the final climb and I don’t see that happening.

Jumbo – Visma – They have been in dominance of the race so far and for good reason. Tomorrow will be no exception, it will be very hard to drop Wout van Aert in these gradients and with Primoz Roglic and Jonas Vingegaard to cover every move, Jumbo can find themselves in a winning position once again. Roglic himself is also a candidate to sprint towards the win.

Ethan Hayter – Can he survive the climb? On a good day, I would say that’s likely. Hayter’s issue is that to win he needs to sprint and for that he’ll need to beat van Aert, however the Briton definitely has the legs to take a win on a day like this.

Dylan Teuns – The finale isn’t as steep as the Belgian would likely prefer, however it will be a sharp effort and the best opportunity for Teuns to succeed in this race. He has in Fleche Wallone and Tour de Romandie taken win in punchy finishes, and he’s got an opportunity to win if he times himself right tomorrow.

There are some more faster finishers in the climbing section which include the likes of Brandon McNulty, Tobias Johannessen, Jack Haig, Wilco Kelderman or David Gaudu who will be threatening and can very well take the stage win.

As for the puncheurs they will be in contention aswell. Riders like Andrea Bagioli, Samuele Battistela, Warren Barguil, Sean Quinn and Michal Kwiatkowski have that explosivity that can be crucial for a sprint if it is left for a sprint at the summit of the ascent.

A late attack can succeed however. Besides the names mentioned above it is worthy to mention the likes of Juan Ayuso, Tao Geoghegan Hart, Ben O’Connor, Enric Mas, Antonio Tiberi and Esteban Chaves can do some damage, but not in a sprint which means that an attack is the only way to succeed in a climb like this.

#67 Michael Storer – Alright Michael, this day won’t be crucial for the GC but we’re aware that these faster ascents are as easy for you. Ideally, we hope to have you in GC contention so besides testing the legs, you only have to stay in the wheels throughout the day and make sure that you arrive with the front group to the finish.

#184 Aleksandr Riabushenko – Day to protect, we’ll be expecting Samuele to try and go for the stage win and your job won’t be to protect him throughout the day – some other guys will do the hard work – but instead to make sure he’s well positioned into and inside the final climb. A sharp effort for as long as you can hang on in the slopes, and if you manage to hold on until the final kilometer you can for sure aswell try to sprint, you never know.

#51 Ben O’Connor – The team will have your back Ben, so you just have to trust your teammates and save your legs for the final climb. It will suit you, and can provide an opportunity for a sneaky move in the final kilometers as it will be very fast and the wind favours attacks. If the pace is too hard focus on staying safe in the group, but if you’ve got good legs then you can for sure try to attack inside the final two kilometers.

Jumbo won stage one with ease, had the chance to win stage two with ease, and I don’t expect any different on the third day. Honestly, Wout van Aert is the man to beat, but I will go for a win by Primoz Roglic in a reduced GC sprint.

Tomorrow’s race has prizes of at least €300 and an entry fee of only €5. Make good use of your knowledge!  https://zweeler.com/game/cycling/FantasyCriteriumduDauphine2022stage3/main.php?ref=790