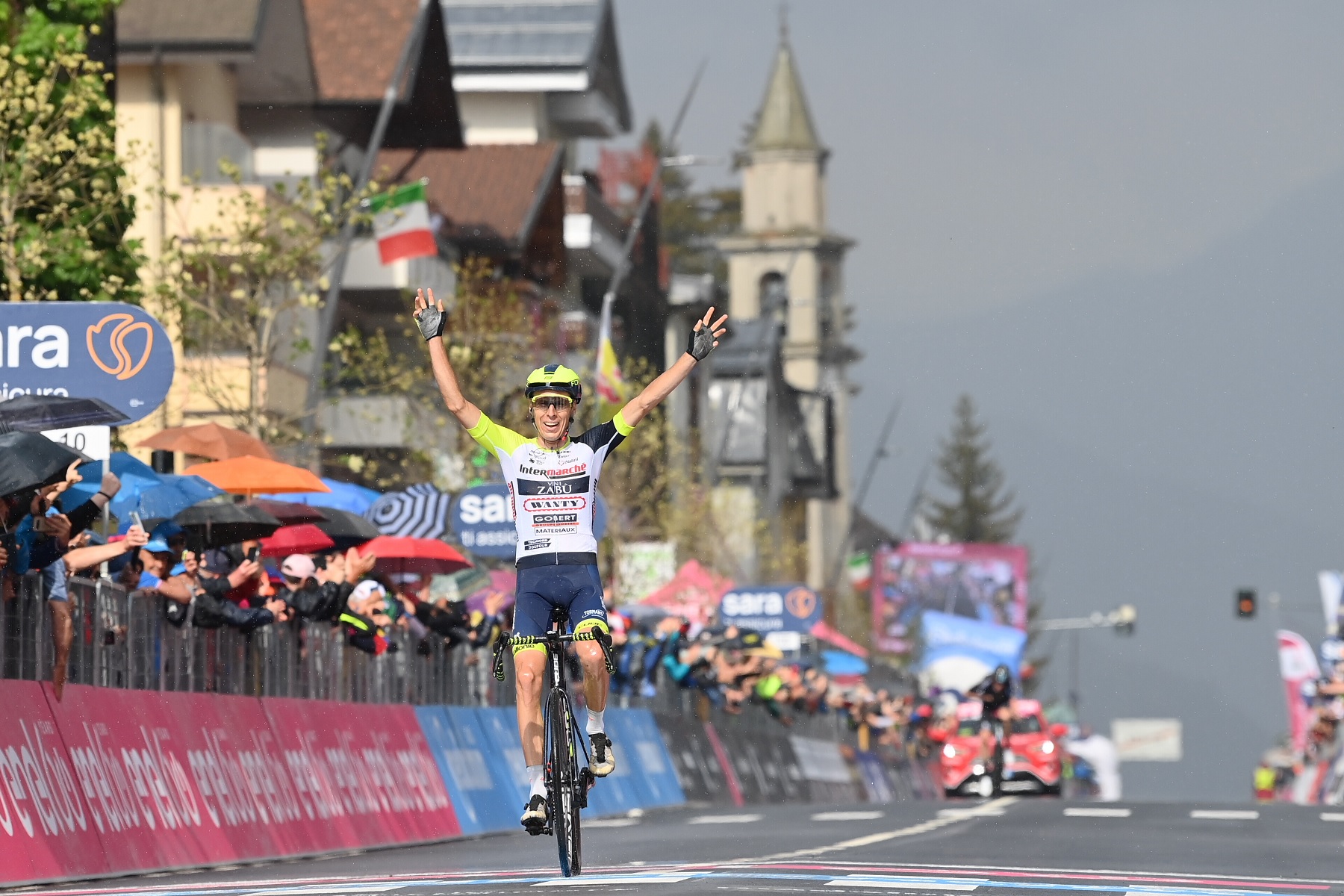 Jan Hirt has stormed to the win on stage 16, a successful breakaway after a gruesome day in the Alps. The Intermarche rider was the strongest up the final ascent from the survivors of the front group, distancing Thymen Arensman – who finished second – and Lennard Kamna in the final kilometers of the final climb. Jai Hindley finished third, as he sprinted over Richard Carapaz and Mikel Landa who went clear from the rest in the final climb – albeit to small differences between the main contenders.

Positive: Hirt riding a very strong stage, the biggest win of his career and also an ascension in the Top10.

Negative: With the struggle of the day, Bilbao/Pozzovivo/Buchmann lost a lot of time and are almost out of the podium fight. Guillaume Martin found himself in the breakaway but struggled later and dropped far out of the Top10. 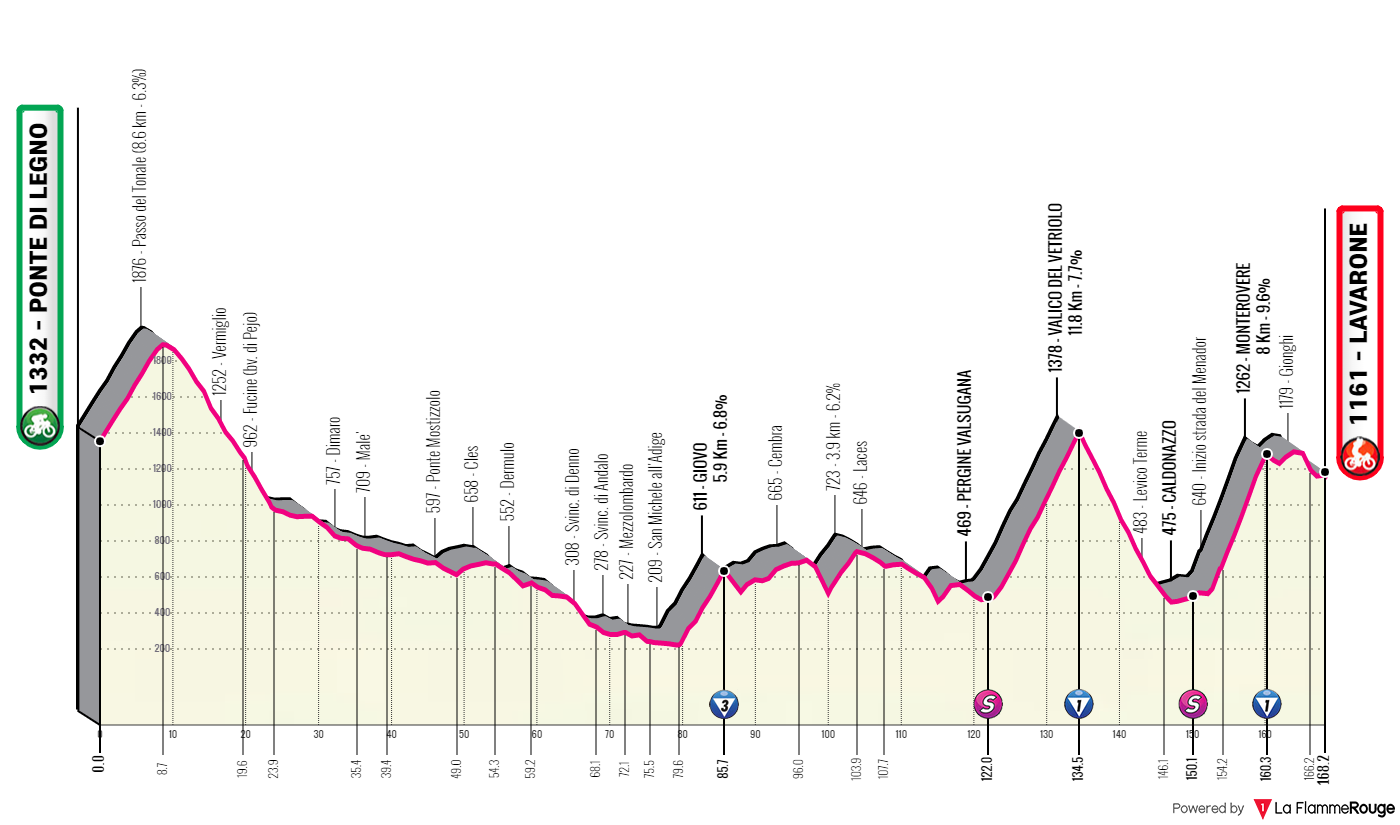 The 17th stage will start in Ponte di Legno, a very familiar town for Alpine cycling fans and immediately head up the Passo del Tonale. It will be short in comparison to some of today’s climbs, but an opportunity for a very strong group to go up the road – at the very least. 8.6 kilometers at 6.3%, before a long descent into some rolling terrain, before the peloton hit the final duo of climbs that will decide the stage. 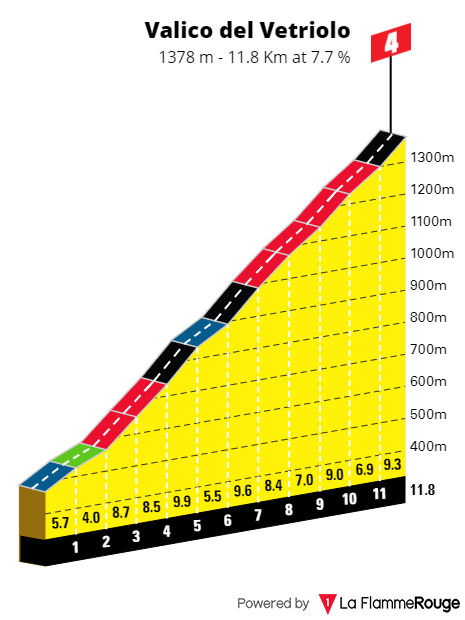 The first of which is the Valico del Vetriolo. Due to stage circumstances, it shouldn’t be attacked, however it’s quite a hard climb, with 11.8 kilometers and an average gradient of 7.7%. It summits with 34 kilometers to go and it’s descent features 12 switchbacks, not exactly an easy feature. 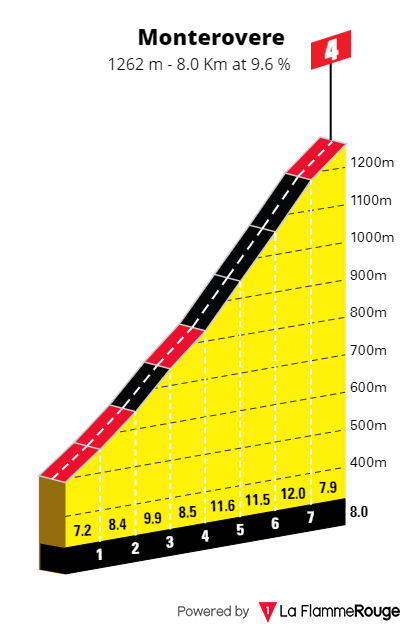 Very few kilometers split the two, which will allow for very little rest inbetween. The final climb of the day is 8 kilometers at almost 10% gradient. A climber’s Giro, people rightfully say, as in yet another day the peloton will have to go through a brutally steep and long ascent, this time into Monterovere. Constant, and tough, it summits with 8 kilometers to go but if that wasn’t bad enough, the finish line in Lavarone will only be reached by a set of rolling roads where the GC riders have to keep pushing to their very maximum for every single second they can get. 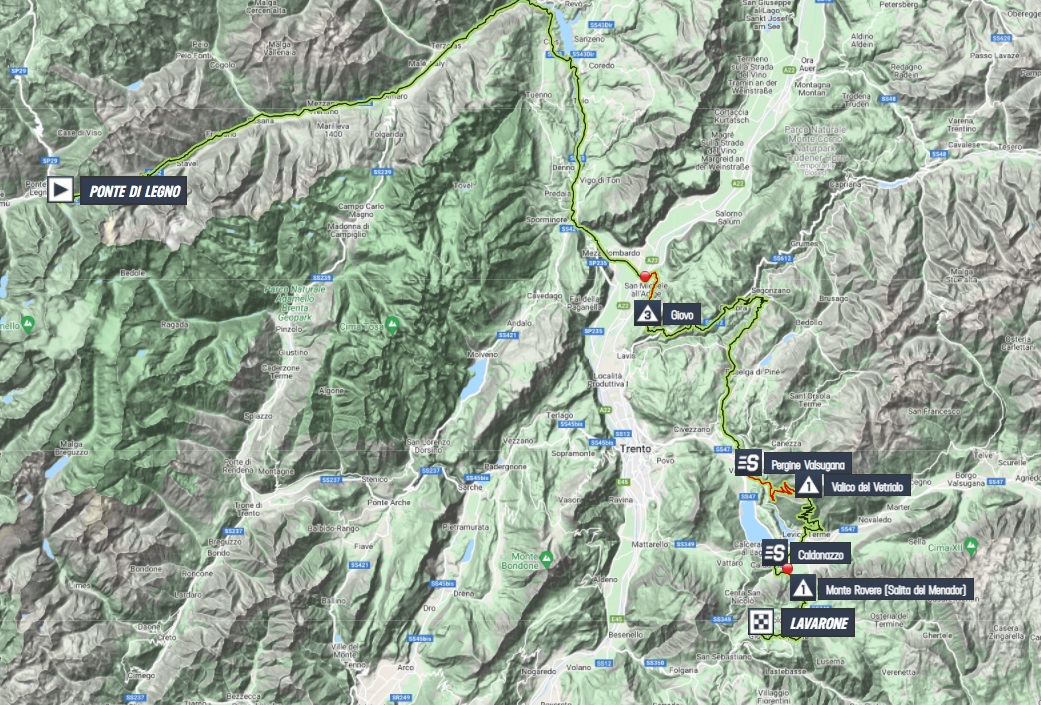 There is forecast of rain. There’s a good chance that this will be the day where the peloton will not be able to evade it, if so it will make some descents rather technical and it can make the day quite more treacherous.

With an uphill start and in the final week, it will be hard to prevent a strong group from going up the road. It will be a hard hard day, with serious GC differences possible to be made. However, its a complicated day to chase and it can be a complicated balance for those looking to take the win from the peloton – which won’t likely be their main focus.

Richard Carapaz – Held his own until now with no trouble. Carapaz is looking sharp, although her focus will obviously be in keeping the pink jersey, INEOS will likely not want bonifications to be available for the GC riders as Jai Hindley has cut the lead to only 3 seconds.

BORA – hansgrohe – Jai Hindley has been looking very sharp in the sprints, and so he poses a danger to INEOS’ ambitions of racing from the front. He is in position to pressure Carapaz, but they seem equal in climbing prowess. Emanuel Buchmann will have more freedom but will be harder to use him to pressure INEOS. Lennard Kamna and Wilco Kelderman had freedom today, and likely tomorrow another round of attacks is likely as BORA don’t need to do the work themselves to blow up the race.

Mikel Landa & Pello Bilbao – Essentially the same situation as BORA. Landa will have a suiting climb, but he’s struggled to distance the top men. Bilbao has more freedom, and can attack. And like BORA, Bahrain have two riders who can be strategically important but also fight for a stage win in Wout Poels and Santiago Buitrago.

João Almeida – Almeida has not yet cracked once, he’s defended himself perfectly and I expect the same thing on this stage. He’ll hope for no rain, but if not he should be able to stay in contention for the race win.

Vincenzo Nibali – In the Top5, but still with little to loose as Nibali seeks a glorious achievement. It’s a tricky stage and the Sicilian may look to explode the race, a wildcard to take into consideration.

The GC riders are very well balanced, and the breakaway possibilities depend on which riders will have the freedom – which is complicated as most have a leader behind. As for others, they have the legs but have failed to perform today, but can very well bounce back tomorrow. There are no crystal clear candidates, feeling on the day will be crucial.

For a breakaway the same riders are to be expected to be in the fight for the stage win. Simon Yates, Giulio Ciccone, Koen Bouwman for example are all riders who’ve won already but will be fighting to take another one. Wout Poels and Santiago Buitrago for Bahrain, Hugh Carthy for EF, Jan Hirt and Rein Taaramae for Intermarche if a chance to repeat success is possible, Thymen Arensman for Team DSM – mostly riders who showed today to be capable of taking a big win.

It’s a brutal day so you can’t rely on riders who aren’t at the top of their game to thrive. Astana look good, with Joe Dombrowski as a possibility, Lorenzo Fortunato and Lucas Hamilton are also possibilities in case they find themselves in the right move.

#44 Santiago Buitrago – Let’s stay with Mikel and Pello. They are high up there, we want a strong result for the GC and we have other riders who can go to the breakaway to possibly bridge across to later. Hard pace in the climbs is expected, if we need to make it harder you will be our main card.

#7 Ben Swift – Stay with Richard, your duty will be for as long as possible, but alongside Salvatore you’ll have to control the stage and make sure everything is under control, and that all our main climbers don’t have to spend more than they have to.

#194 Romain Combaud – Nothing much to do here, stage 18 will be an opportunity for a breakaway perhaps so let’s save ourselves to that day. You can be beside Thymen for some of the day, keep him safe, but afterwards ride safely and make sure Alberto stays in the race. 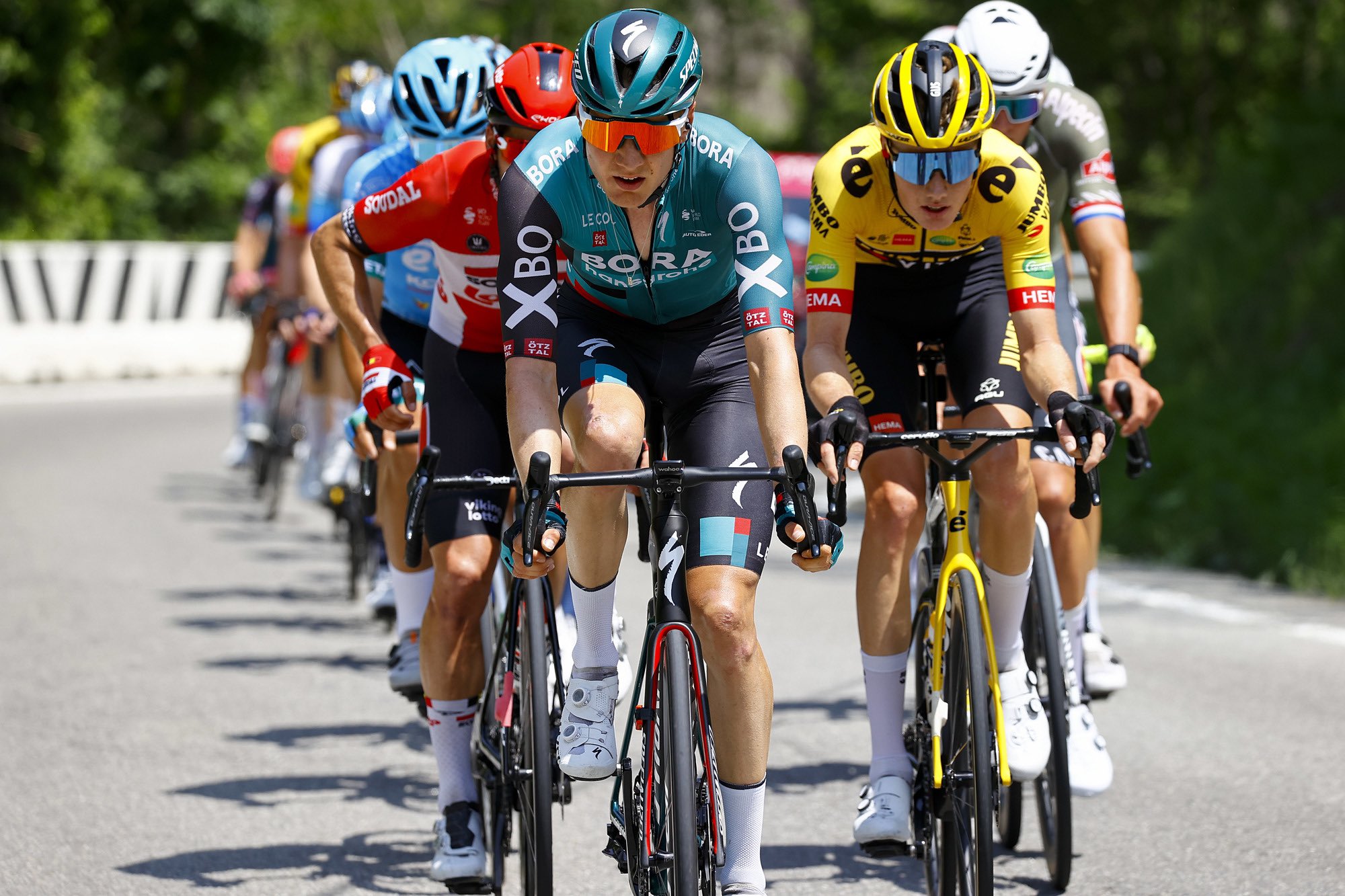 A complicated day to guess. My call is for a breakaway win because the start should be chaotic, and Wilco Kelderman to have the call to be in front but this time ride at his expected level and take the win.