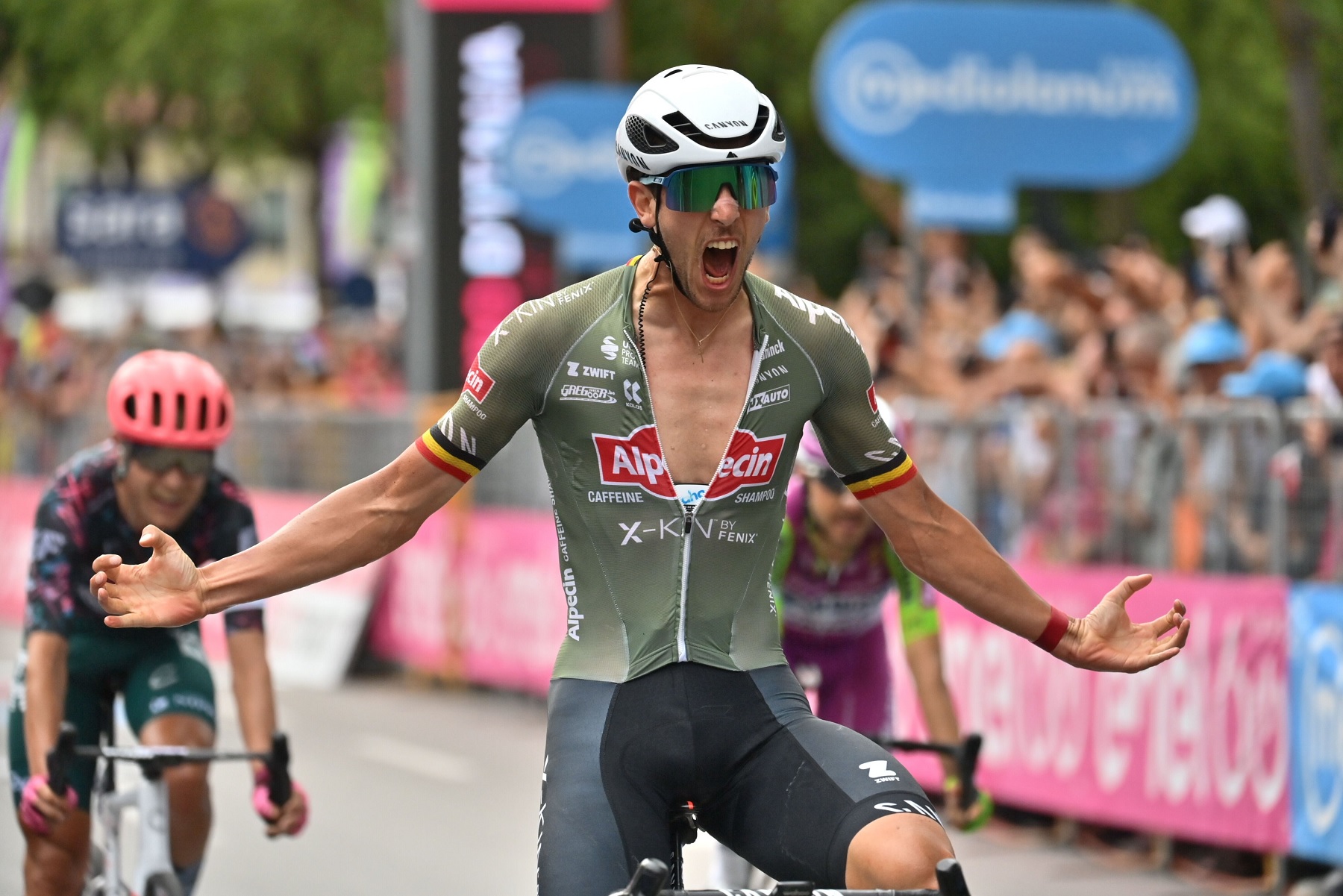 A successful breakaway, once again on the final Giro d’Italia flat stage. It has become a tradition by this point, and this year’s lucky rider was Dries de Bondt who took advantage of a strong group of four that went up the road early on and kept their lead all the way into the finale. He beat Edoardo Affini and Magnus Cort Nielsen in the sprint to bring in the biggest win of his career.

Negative: João Almeida abandoning with Covid, a terrible ending to his race up to now. Juan Pedro Lopez jumped into the white jersey, but was caught out in a split and lost over 2:30 minutes today. 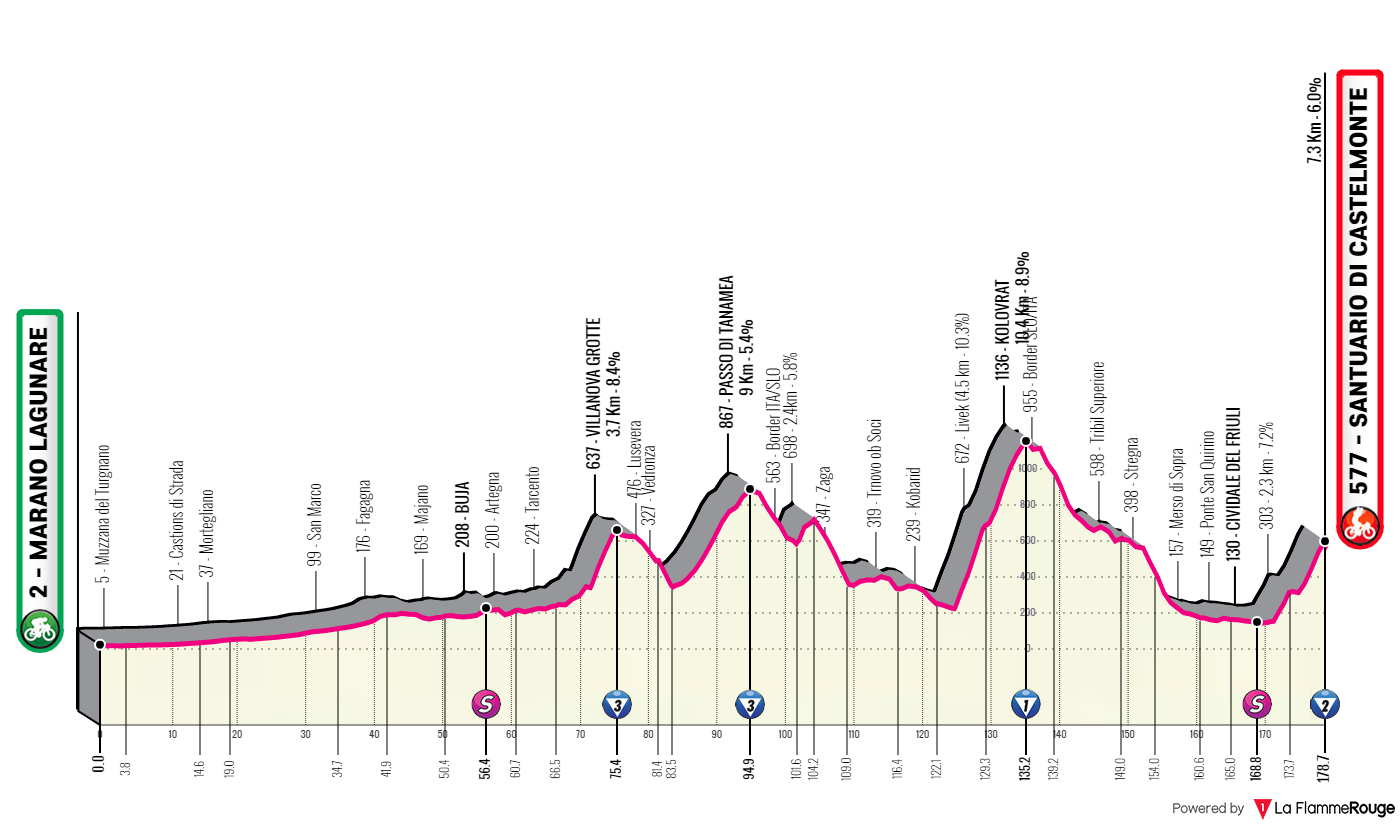 With an opening 70 flat kilometers, this is a stage that can be attacked for quite a long time before it enters the mountains. A tricky day, with an interesting mix of climbs where you don’t really know what will happen until the riders are on the slopes.

Two “early” ascents with 103 (3.7Km, 8.4%) and 93 (9Km, 5.4%) will opens things up, with some rolling terrain which will lead the riders into Slovenian territory. Unfortunately for the race, it failed to attract the Slovenian stars, however action may nevertheless kick off quite intensely when the riders go up one of the hardest climbs in the country. 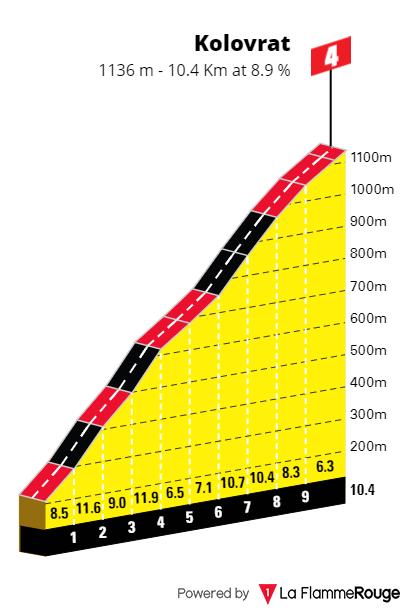 I don’t doubt that Slovenia is packed with horrific ascents, however in the context of pro cycling I doubt many would top Kolovrat. It’s 10.4 kilometers at 8.9% and fits the theme of long and steep ascents throughout this final week. It summits with 53 kilometers to go, it’s a long way, so it’s hard to predict if attacks will come out of it or if the GC riders prefer keeping an eye on each other, as they enter Italy back again into Friuli. 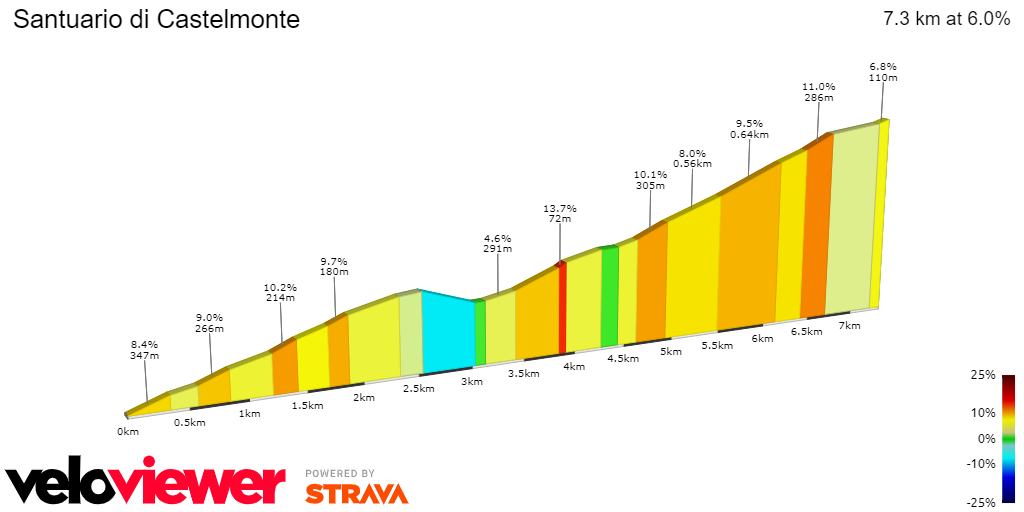 The stage does end in an ascent, although considerably more gentle then the previous. The climb into the Santuario di Castelmonte is not a walk in the park though, a descent in the middle disrupts the 6% average gradient. The gradients go above 10%, so it’s definitely not a far-fetched idea for the climbers to test themselves in the slopes of thr 7.3-kilometer climb. 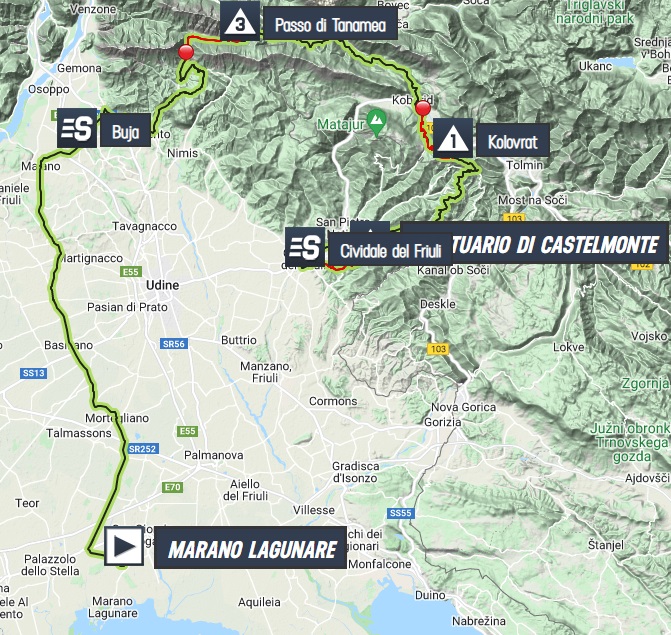 Slight breeze from the west, nothing special for the day, besides warm temperatures.

A breakaway is likely to succeed. Although the start is flat, I doubt Carapaz, Hindley and Landa will want to spend many bullets here seeing as the final mountain stage lies ahead, Grand Tour racing explained. Nevertheless it can happen, or it can happen that a modest group goes up the road in the flat section of the stage, but it’s unlikely to me.

Lennard Kamna & Wilco Kelderman – Kamna is the obvious name to take into consideration, as he’s been eyeing wins throughout the whole race. He can also be a very important bridge for someone from the peloton, so BORA should have interests in sending riders up the road. Wilco Kelderman is just as, if not stronger, so there are definitely options to make a move and go for the stage win if the GC won’t be a priority.

Wout Poels & Santiago Buitrago – Buitrago has gotten his win, but with Almeida gone a youth jersey is still possible. A breakaway would fit, as not many will actually want to chase him, and Buitrago has proven to be a top climber. Wout Poels the same situation, he’s coming around in the third week and both mountain stages will have him as a main favourite the way he’s riding.

Furthermore many other riders can feature in the fight for the win. Giulio Ciccone and Bauke Mollema from Trek, Gijs Leemreize and Koen Bouwman from Jumbo-Visma, Thymen Arensman from DSM, Hugh Carthy for EF, Mathieu van der Poel for Alpecin, Lucas Hamilton for BikeExchange, Guillaume Martin for Cofidis, Joe Dombrowski for Astana, Alessandro De Marchi for Israel, Rein Taaramae for Intermarché, Davide Formolo for UAE, and perhaps other riders who could have a strong day and find themselves in the right place at the right time.

A GC fight is quite possible, the climbs are hard enough. Jai Hindley and Richard Carapaz have seemed inseparable so far so I expect them to be evenly matched, Mikel Landa closeby but also lacking the explosivity to deliver the killer punch. However the crucial climbing comes far from the finish and it may open things up for other riders such as Pello Bilbao or Emanuel Buchmann who can benefit from their team depth, Vincenzo Nibali is also unlikely to go down without a fight.

#98 Julius van den Berg – Flat start, so you’ll be on Hugh duty. Goal is to try and get him in a breakaway at all costs, prevent him from hitting the wind, so by consequence you should. That’s the target for the day, get him up there and resist as long as possible.

#73 Simone Consonni – The job here is done, we’ll let you rest pretty much all the way into Verona now. If you want you can talk to Guillaume and assist him at the start of the stage, it can do us good.

#183 Lucas Hamilton – We’ll have some of the guys help you early on to get in front. That in itself will be a challenge, so stay focus as if you don’t make the move there’s no chance to win to begin with. Stage win is full focus, ideally the big difference will be made on Kolovrat where I expect you to thrive and drop most of the breakaway. From there, solo is impossible, but make sure you can get a good group and then play your cards towards the end.

A win for Thymen Arensman from the breakaway is what I believe. It can fall for many riders, however I think the Dutchman has the form, a suiting stage and has been very close enough times.