The final monument of the season! The time has come for Il Lombardia, the one most suited to the climbers, which takes the riders into northern Italy and into the Great Lakes region, a day which will conclude the season for many of the world’s best climbers and puncheurs who will be looking for one final grand victory. 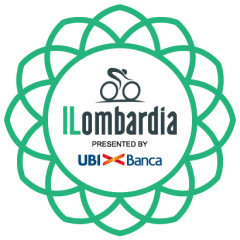 This will also be my final preview for Ciclismo Internacional. I want to thank Pablo and the whole team for having given me the platform to share this content, and I thank all readers for having been a part of this journey. 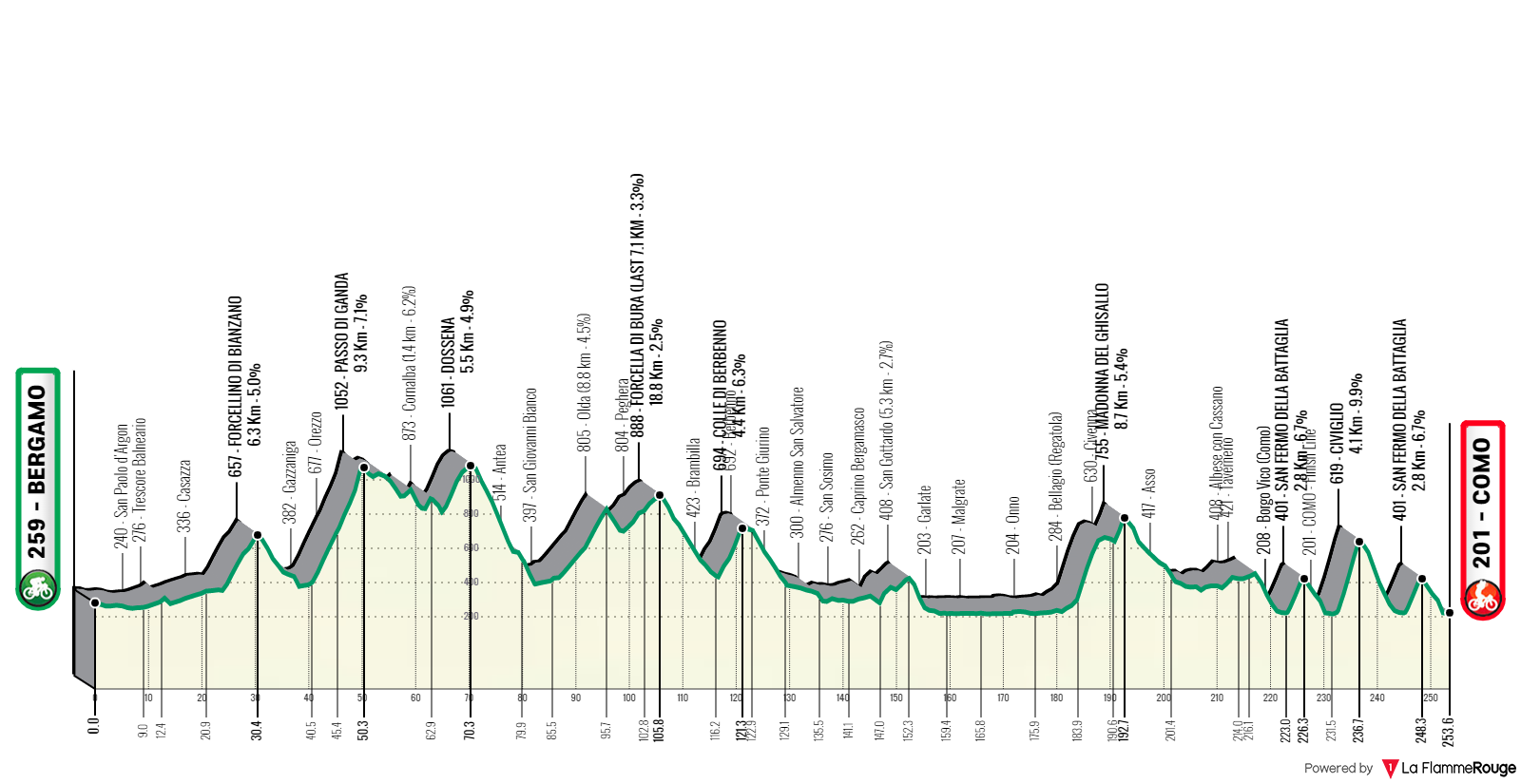 The opposite of last year, the route will this year see the start in Bergamo and the finish is Como, hence seeing a completely different profile, however with very meaningful climbs present in the route. The race will be 253 kilometers long and feature around 4900 meters of climbing. Although the longest ascents are not towards the end, it will not be easy for the puncheurs and classics riders to make it through to the end.

The race early on features the Passo di Ganda (9.3Km; 7.1%) where Tadej Pogacar made the decisive attack last year en route to his win. This year the climb’s role will be more modest, however the first half of the race features six climbs of different lengths and gradients which will likely not be attacked, but will set in the fatigue and drain riders out of their capacity later on in the day. 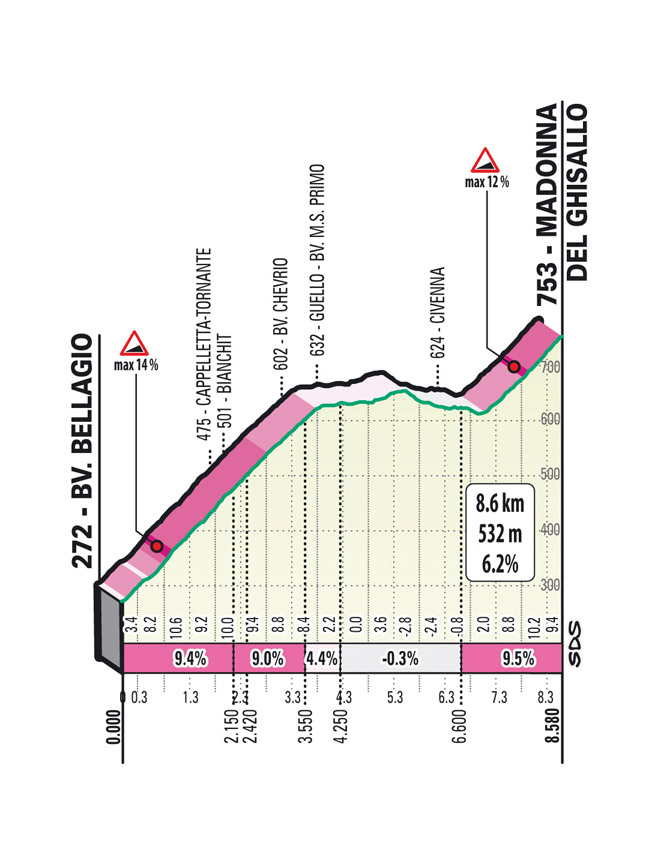 Competitively, the race is only expected to really start firing up at the Madonna del Ghisallo. It’s unlikely that any meaningful attack will come from it seeing what will be left of the race and the 61 kilometers left to the finish, however some teams may have ideas of pushing on here in order to start preparing an attack. It is 8.6 kilometers in distance and 6.2% average gradient, however slightly misleading as it features a lengthy flat section in the middle of it. The race then moves on into the outskirts of Como, avoiding the famous Muro di Sormano climb which has so often decided the race. 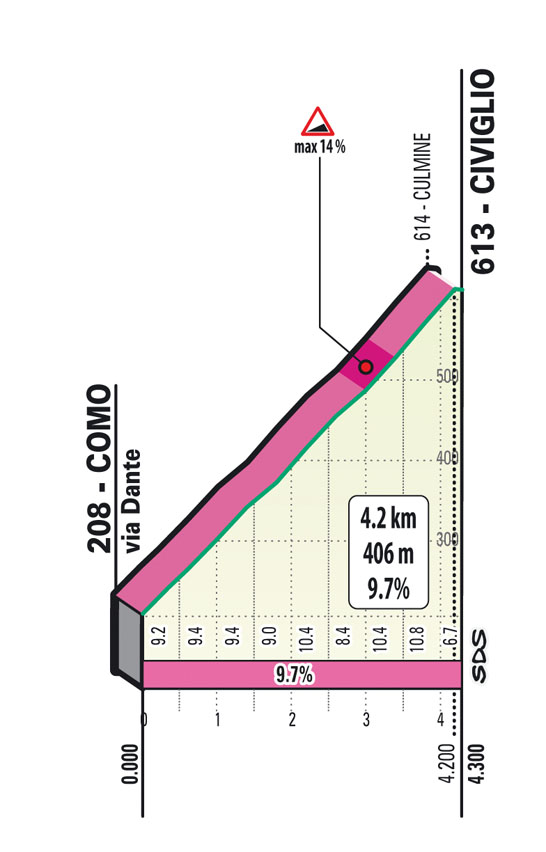 Instead, the race will follow a more traditional finale. The riders will ride through San Fermo della Battaglia for the first time with 27 kilometers to go, and through the finish with 22. More on that below, the riders will quickly head into the other side of town to climb into Civiglio.

Civiglio is one of cycling’s most iconic climbs at this point, featuring 4.2 kilometers at constant almost 10% gradients. It is one for the pure climbers, at the end of such a hard day and with no restbite, it’s a constant effort where the main differences are expected to be made. It summits with just 17 kilometers to go and what follows is a short but very technical descent back into town, where the race can be won or lost. 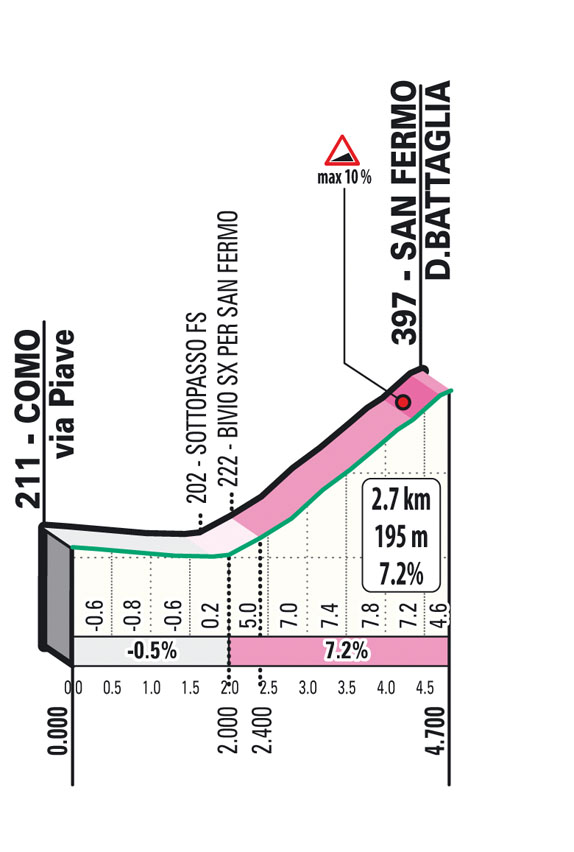 However the riders will still have one more ascent to go as they return to San Fermo della Battaglia. The climb is not as hard, however 2.7 kilometers at 7.2% is hard enough to make the difference, specially at the end of such a tough race. This is where energy management in the first hours will come into play, as some may crack completely in this explosive effort. It finishes with only 5.3 kilometers to go and if someone goes solo over the top, the race is likely over.

The riders will descent directly into the final kilometer afterwards, for a lakeside finish in the town of Como. 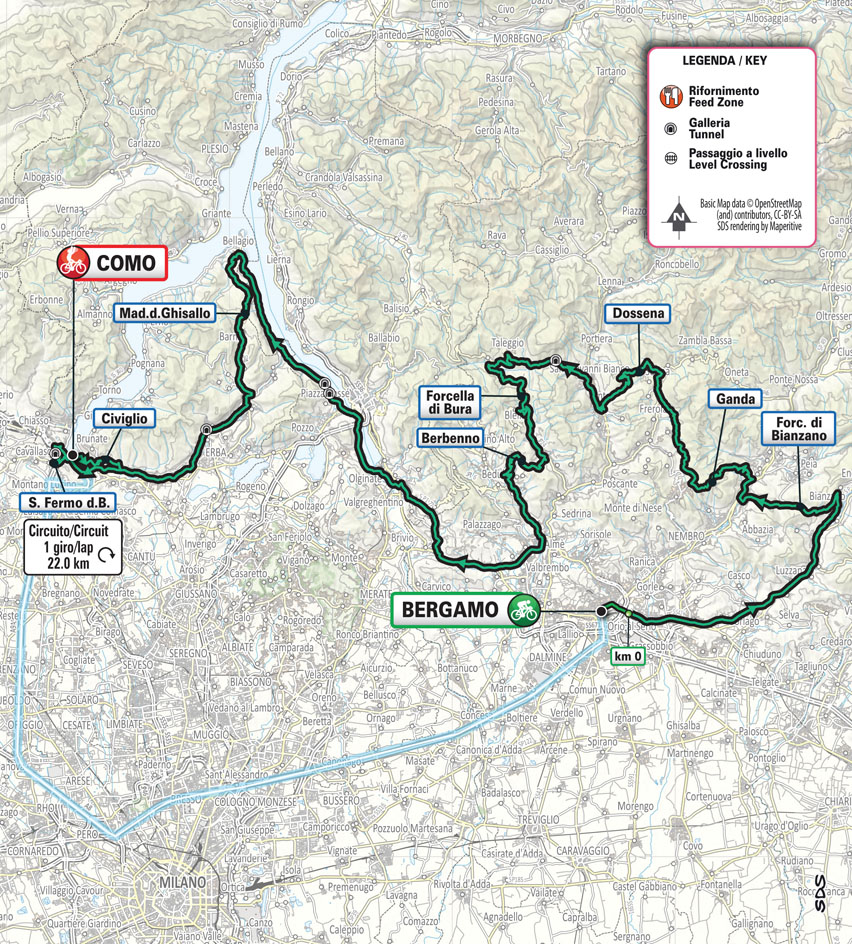 A small breeze from the south, but it shouldn’t affect the race. The temperatures will be moderate and so it should be a relaxed day.

I don’t expect it to be a very tactical race. There will be a lot of climbing early on, but I doubt any team will really try to put riders in front and put pressure, despite the incredible depth some teams have here. Ghisallo is not a climb where much damage can be done, and the first ascent of San Fermo della Bataglia won’t either.

They will be used to create damage and wear down the peloton, surely with the team’s with the teams of the top climbers trying to put on a strong pace in order to attack Civiglio. And there I expect the race to blow up, with a very small group getting away, it’s a steep climb but long enough for serious damage, with a very technical descent. I don’t expect a sprint, likely a late move in the final hilltop of a move in the descent of Civiglio will decide the race.

UAE – Tadej Pogacar is the defending champion and after his win on Tre Valli Varesine he’s shown to be ready. He’s got the form and the team. I don’t think he can benefit much from such a strong team here, but whatever the team’s tactics are they should be able to pull it off. Pogacar has strong climbing support in João Almeida and Rafal Majka, and strong classics riders in Alessandro Covi, Diego Ulissi, Davide Formolo and Marc Hirschi. A very complete team, a dangerous one in fact, specially if there is consistency within it’s strongest riders.

Enric Mas & Alejandro Valverde – Movistar won’t have much support from behind, but have two strong leaders on board. Mas has won Giro dell’Emilia and appears to be on terrific form, he will be a threat in Civiglio with certainty – however if he wants to win, he will surely have to go solo there. Alejandro Valverde won’t likely be able to climb as well, but he does have a strong sprint and a better punch for the final ascent. The duo can have some interesting tactics which can end up in a win.

INEOS – A lot of depth, a dangerous team. Laurens de Plus, and perhaps Ben Tulett will have supporting roles from the start. The British team have at least five cards that on their best day can fight for a top result, it’s not a race where you can really benefit from depth but they have good chances of having at least one rider in the fight for the win. Adam Yates and Daniel Martínez are perhaps their best chances, both riders well suited to this type of climb and with good form shown recently. Carlos Rodríguez, Pavel Sivakov and Tao Geoghegan Hart will also be outsiders.

BORA – A strong team, but with two seemingly clear leaders: Sergio Higuita finished the Vuelta with good form, and finished second at the recent Tre Valli Varesine, he will surely be the German team’s best option. Aleksandr Vlasov has not shown much of his form since the Tour de France, but has had good signs at the same race and on good form the climbs will suit him very well.

Quick-Step – On paper Julian Alaphilippe is the leader of Il Lombardia, and the long distance suits him. However, since April crashes and illnesses have gotten in his way, and he’s struggled to get form. The team has two in-form puncheurs in Andrea Bagioli and Mikkel Honoré who can surprise, but it won’t be easy in this terrain. The likes of Ilan van Wilder and Mauri Vansevenant are perhaps more reliable choices.

Bahrain – Jack of all trades, master of none? That’s how I see this lineup of Bahrain, coming with five potential podium contenders but none really showing their best form. Matej Mohoric has won the recent Cro Race, however he is simultaneously the one who may struggle the most with the climbing – and the descents won’t be enough to compensate for it. They bring Mikel Landa, Damiano Caruso, Gino Mäder and Wout Poels, all strong climbers, but without any meaningful recent results. They’ve had a different preparation route however, so maybe they’re keeping their form relatively private.

Jonas Vingegaard – Back to racing at the Cro Race, where he’s won two stages and finished second in the GC. Don’t be fooled though, the competition was very modest, however he has shown competitive form and with 5000 meters of climbing he will definitely have a say in the day.

Ending his career and on roads he’s very familiar with, Vincenzo Nibali will be a rider to eye. Astana also have Miguel Angel Lopez who can perform on a good day, and will make the Kazakh team somewhat dangerous. Other teams will have dangerous duos such as EF with Rigoberto Uran and Alberto Bettiol, or Team DSM with Romain Bardet and Thymen Arensman.

There will be a duo of outsiders in great form, who can also be a threat to this race, or definitely punch above their weight. One is Domenico Pozzovivo who rode into third at the Giro dell’Emilia and has also shown his form in other Italian classics recently, and the other is Lorenzo Fortunato, sixth at Emilia and a lover of the hard days and steep climbs.

From a third line of hitters perhaps, you will have some outsiders who may benefit from their leadership and on a good day strike a spot in the Top10. Aurelien Paret-Peintre for AG2R, Jay Vine for Alpecin-Deceuninck, Filippo Zanna for Bardiani, Guillaume Martin for Cofidis, Andreas Kron for Lotto Soudal, Warren Barguil for Arkéa and Pierre Latour for TotalEnergies.

Groupama will also have two weapons in Michael Storer and Rudy Molard who have shown good form ahead of the race, and Trek for example have many possible outsiders (Bauke Mollema, Giulio Ciccone, Juan Pedro López and Mattias Skjelmose), surely one can be in contention for a good position at the end. Israel also have Dylan Teuns, Jakob Fuglsang and Michael Woods, all candidates for the win on their best day, but their form is questionable. 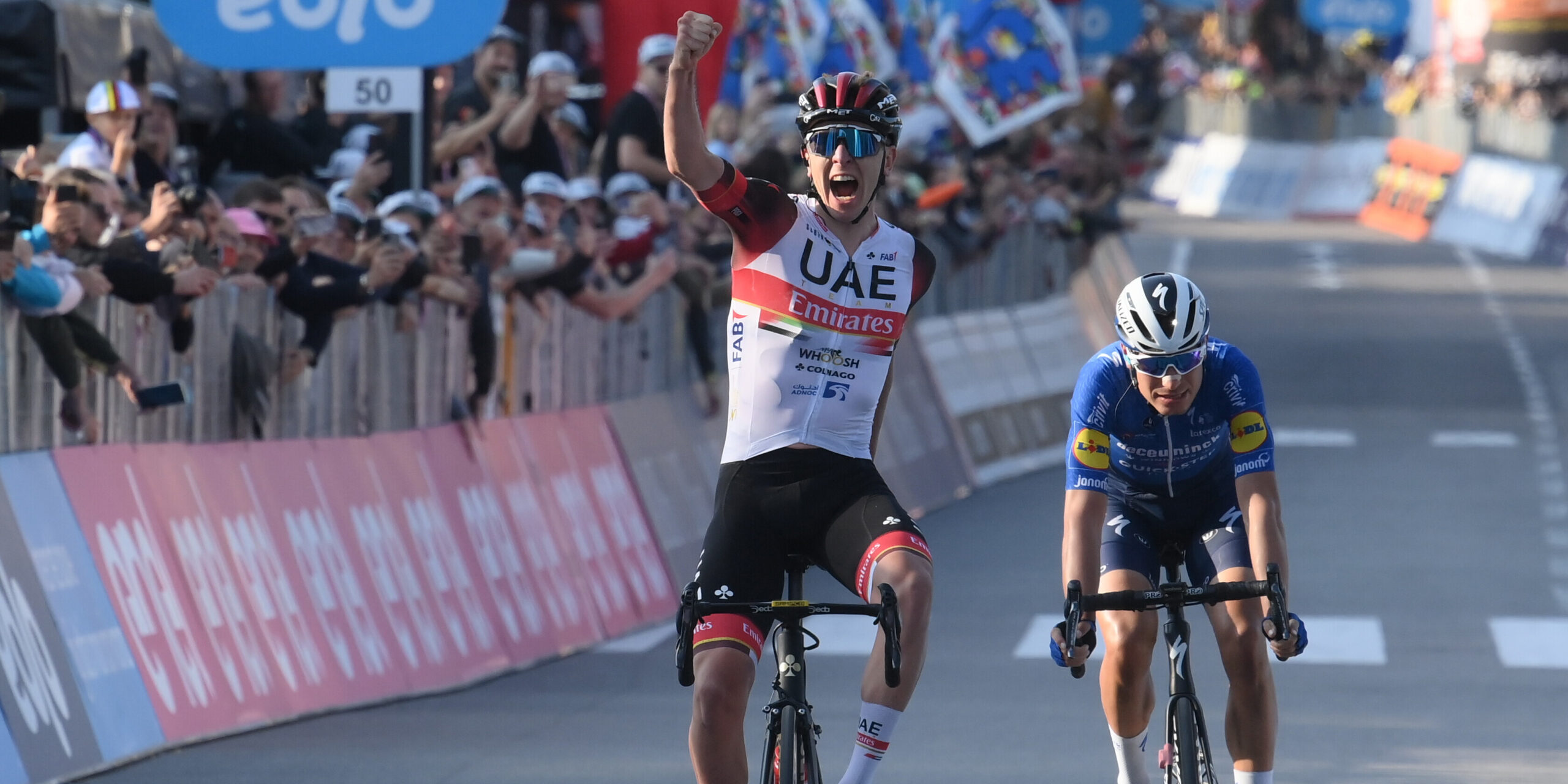 It’s hard to visualize anyone else winning here, Tadej Pogacar to take the win. I think UAE will want, and have a team strong enough to control everything until Civiglio. I think only Enric Mas MAY drop him there, but the descent should see things back together. It will be very hard to see anyone with a sprint stronger than him arrive at the finish together, so it will be a matter of arriving at the top of Civiglio in good position and then control to the finish.

Tomorrow’s race has prizes of at least €3000 and an entry fee of only €10. Make good use of your knowledge!