The final step of the Ardennes classics and the fourth monument of the season. Liège-Bastogne-Liège is what many consider the end of the spring campaign, and it is one heavily disputed every year between the climbers and puncheurs. 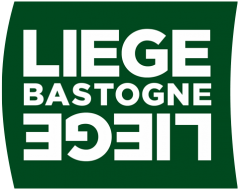 Liége is the Ardennes classic that suits the climbers the most. It has the most amount of climbing out of them, with almost 4300 meters on the menu and although it doesn’t feature any mountain, there are some longer ascents to tackle which can be used to drain the energy of the more explosive riders.

A lot of it comes in the final 100 kilometers. There will begin a long sequence of climbs, with virtually no flat roads inbetween. With 75 kilometers to go you have the steepest climb of the day the Côte du Stockeau (1km at 12.8%) and the longest which is the Col du Rosier (4km at 5.7%) with 56 kilometers to go.

With 42.5Km to go there’s the Côte de Desnié (1.6Km at 7.5%), and the penultimate climb is the Côte de la Redoute which summits with 29 kilometers to go. It is 2 kilometers long at 8.6% and can set things up for those looking to make the race hard, it’s a narrow climb which can see dangerous attacks too. 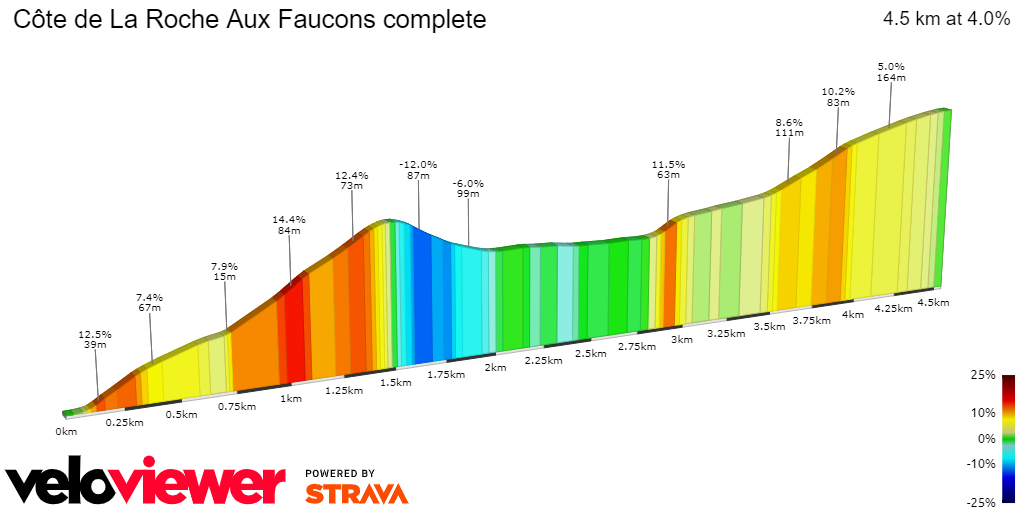 The decisive point of the race will be the Côte de la Roche Aux Faucons. It is the final climb of the day, and the small hilltop afterwards (which I consider part of it) can be just as crucial for the race. It is 1.3Km long at 10.5%, essentially the same data as the Mur de Huy but without such gruesome gradients. It summits with 13 kilometers to go, will it however see decisive attacks? It may not, as there are only some seconds of rest before a small second hilltop which has 1,2Km at 6.3% (10Km to the finish). This is a weird combination of climbs, where riders risk cracking on the second if they go all-out to make the differences in the first climb. If they save up for the last hilltop, they risk carrying a big group in the wheel, the tactics can be very interesting.

The descent afterwards to Liége is very fast and doesn’t allow for recoveries, doesn’t allow attacks aswell, as it almost goes to the final kilometer. It is a sprint from there on, unless someone gets quite distracted. 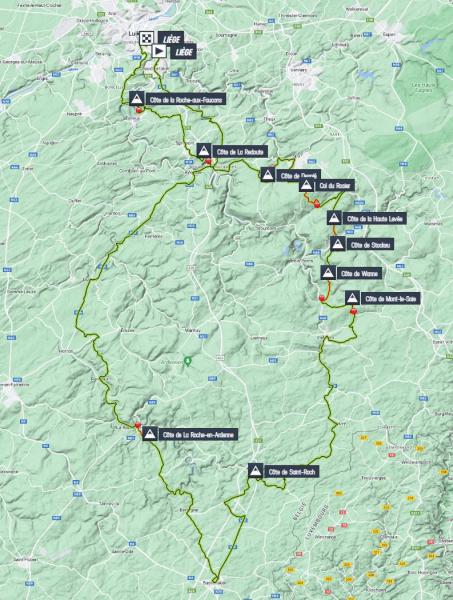 Moderate wind from the northeast. Is this good or bad to attack? Good question, both final climbs have directions changes, but mostly have crosswinds to them, and the section between both is the same – but I wouldn’t consider it’s strong enough to create echelons in the plateau.

I thought Flèche Wallone would be more attacked, as the startlist was full of quality and the trend these past years has been of increasingly aggressive racing. That wasn’t the case though, at all, so I expect the same behaviour here. The race is different – longer, harder, however most contenders will be saving themselves, and I expect teams to conserve lots of resources for the final hour of racing.

Why? Because positioning at the bottom of the climbs is crucial, and the leadout to both La Redoute and Roche aux Faucons will be furious. This means that any rider in front will have his gap cut with a guarantee, which all riders will know – and not many will consider it worthy to attack early. Besides, some teams like Israel, Lotto, Cofidis, etc. absolutely need the UCI points, so I do believe this will be taken into consideration and they will prioritize a conservative ride with better guarantees of a good result.

Attacks can come after La Redoute though, I wouldn’t say main favourites, but absolutely some dangerous names. As for Roche aux Faucons I expect a small group to emerge over the top as has been over the last couple years.

Julian Alaphilippe & Remco Evenepoel – Surely Liège will suit Evenepoel better, which is necessary as Julian Alaphilippe isn’t showing the same form as in past years where he came very close to winning the race. Quick-Step need a win for the spring campaign which finishes here, pressure will be on, and the World Champion will be one the main contenders.

Wout van Aert – After an expansion of his spring due to Covid-19 and the absence of Primoz Roglic due to a knee injury, the stars have aligned for Wout van Aert to have a go at the win in Liege. Will he do it though? He absolutely can, is my opinion, he’s shown more than once to be able to climb with the best even on steep gradients, and with the support of Tiesj Benoot and Jonas Vingegaard, Jumbo can very well control the race to their liking until the final climb.

Bahrain – 1 domestique and 6 co-leaders. Flèche Wallone winner Dylan Teuns will be a very dangerous name, but I reckon the true threat from Bahrain comes from their numbers and how they will want to blow up the race – since they will have the means to attack ofte. It can trigger even more dangerous moves from the peloton, and surely can impact the race a lot. With Matej Mohoric, Damiano Caruso, Jack Haig, Wout Poels and Mikel Landa also present I reckon they not only can but have the responsibility to attack from far.

Alekandr Vlasov – The Russian has finished on the podium of Flèche Wallone and I reckon Liège suits him even better. A sprint win? That won’t happen, however he’s a good contender, a strong climber and with support from the likes of Wilco Kelderman, Jai Hindley, and who knows Sergio Higuita if he has a good day.

INEOS – Tom Pidcock was shut off in Flèche, which puts a cross in the team’s strategy as there is no clue on how he can do here. The team will hence rely on Daniel Martínez most likely, fifth in Flèche and winner of Itzulia, he’s looking in great form. Michal Kwiatkowski and Carlos Rodríguez can also be interesting names.

Alejandro Valverde & Enric Mas – Movistar raced this perfectly some days ago and Alejandro Valverde net a surprising second place. With more climbing, Enric Mas will surely be a very dangerous wildcard in here too. They won’t come in with any responsibility to work, but can find themselves in a good position to fight for the win.

UAE – Without Pogacar the team isn’t as powerful as it could, but nevertheless it is a daunting lineup. Brandon McNulty has been one of the most powerful riders in the season so far and is a big wildcard, and Marc Hirschi – who started his season late – is another as in his best day he is capable of winning this race, but his form is inconsistent. Nevertheless, George Bennett, Marc Soler and Diego Ulissi are further cards to play.

Cofidis – Will they go for points, or race aggressively? In both ways, Cofidis have quite a lot of depth, with Victor Lafay, Ion Izagirre, Jesús Herrada, Rémy Rochas and Guillaume Martin they can target a strong performance on Belgian roads, aswell as deploying some interesting tactical play.

Groupama – Rudy Molard was a pleasant surprise in the Top10 earlier this week, and so Groupama come in with a strong team that despite missing Gaudu due to illness, comes in with Quentin Pacher but most importantly Valentin Madouas who finished on the podium at the Tour des Flandres and has revealed himself as a world-class classics rider.

Outside of those names though there will still pop plenty, as the startlist is indeed of immense quality and there are many world-class rider capable of fighting for the victory in this competition, or at least a top result. In the more puncheur side of things you will have the likes of Michael Matthews, Benoit Cosnefroy, Soren Kragh Andersen and Alexis Vuillermoz, who will likely be hoping for a more conservative race, without many moves before the final ascent as they can benefit from their explosivity there. Andersen is a big possibility for an early attack just as he did in Flèche Wallone.

Having shown good form at Flèche, Ruben Guerreiro and Michael Woods will be strong outsiders for the race alongside Romain Bardet who’s just left the Tour of the Alps victorious. Tim Wellens, Warren Barguil and Tobias Johannessen make for a good mix of riders of which I expect a strong performance from.

Whilst some other riders like Aurélien Paret-Peintre, Rigoberto Uran, Domenico Pozzovivo and Bauke Mollema are also options, but I’d say a Top10 would already be a good result taking current context into consideration. 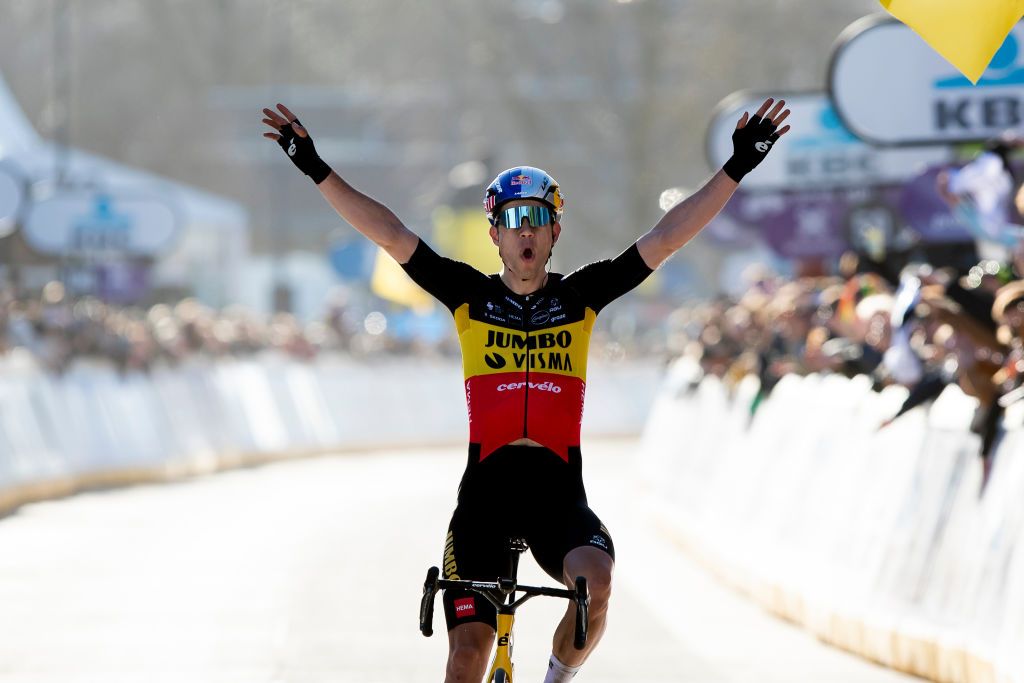 My call for the victory is Wout van Aert. There is no climber that has seemed to be above the competition lately, hence I see van Aert being able to respond to the attacks on the final ascents. And in a sprint finish he’ll be able to take it.

Tomorrow’s race has prizes of at least €3000 and an entry fee of only €7. Make good use of your knowledge!

If you’re interested in the low-budget version, there are still prizes of at least €300 with an entry fee of only €2.