It was a day where the fatigue was felt from yesterday. The peloton rode more conservatively, as the breakaway went on to fight for the stage win. Tom Pidcock joined the day’s breakaway early on in the day, and managed to make the difference at the Alpe d’Huez, distancing Louis Meintjes and Chris Froome who completed the first three places on the day. In the peloton Jumbo-Visma managed to control the race from start to finish, with Jonas Vingegaard managing to arrive at the finish alongside Tadej Pogacar after surviving his attacks in the final climb. 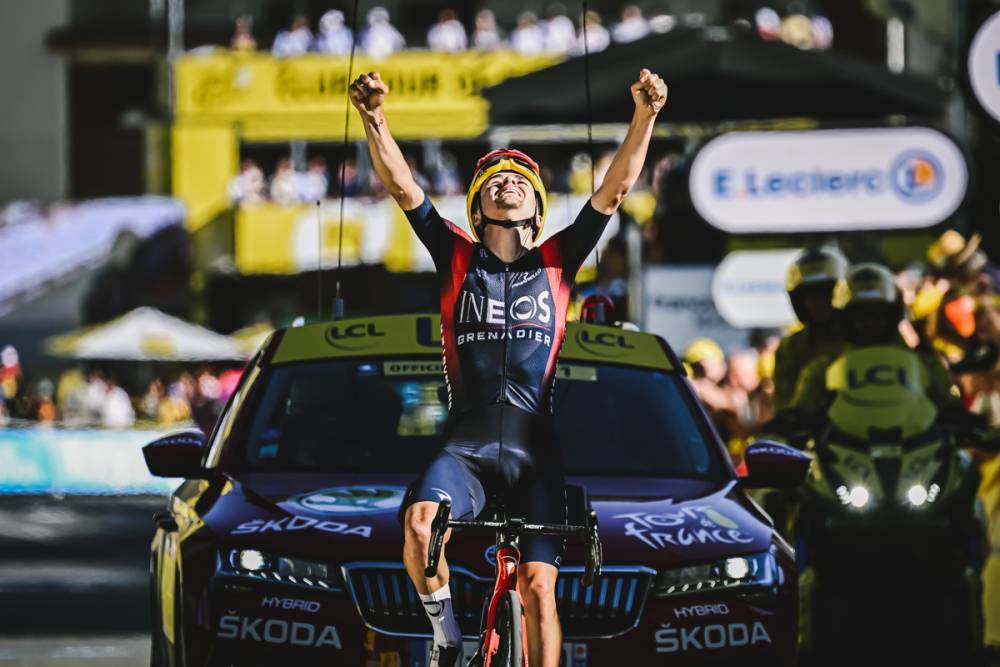 Positive: Tom Pidcock taking a very strong win and climbing back into the Top10, Chris Froome showing competitive legs once again and looking very strong in the climbs, and Enric Mas showing a very different level to that shown in the previous mountain days.

Negative: Nairo Quintana the main GC rider who struggled the most up the final climb, loosing precious time in the fight for the podium. 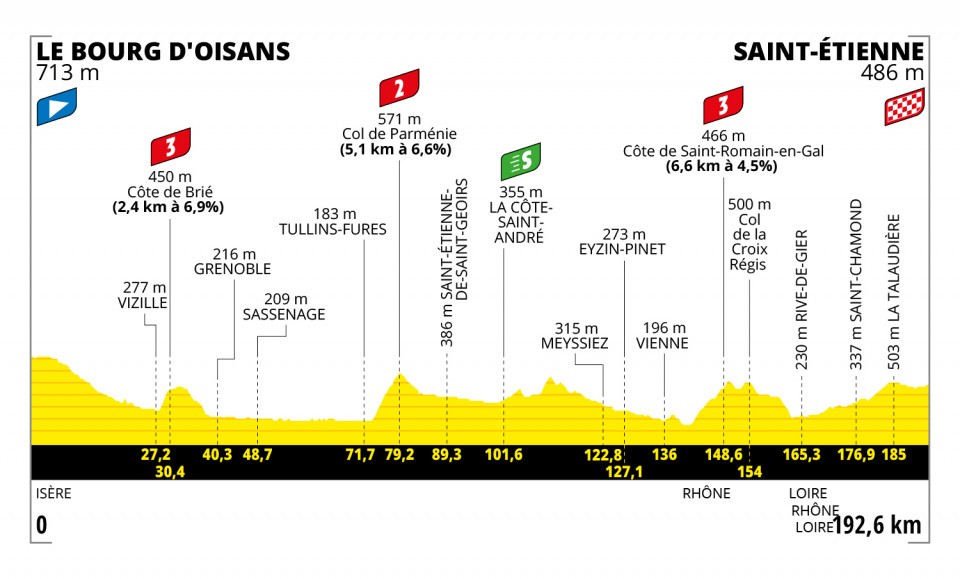 The riders leave the Alps, to the satisfaction of many, and heads directly into the Massif Central on the 13th stage. The stage is 193 kilometers long, a long day on the bike with a few climbs the peloton ride over, on a day that is however likely to finish in a bunch sprint.

The start will see a long descent, soon after followed by a 1.9Km climb at 8.1%. This can be an issue for the sprinter teams, who have here a spot where the breakaway hunters can attack and move off from the peloton and establish a strong breakaway. It’s very much a transition day, with a 5.2Km climb at 7.1% summiting with 114 kilometers to go that can also be an obstacle for an organized chase. There will be some more hilltops, however the most important is likely with 43.5Km to go, an hour away from the finish, where the riders will ride up the Côte de Saint-Romain-en-Gal (7.4Km at 4.7%). 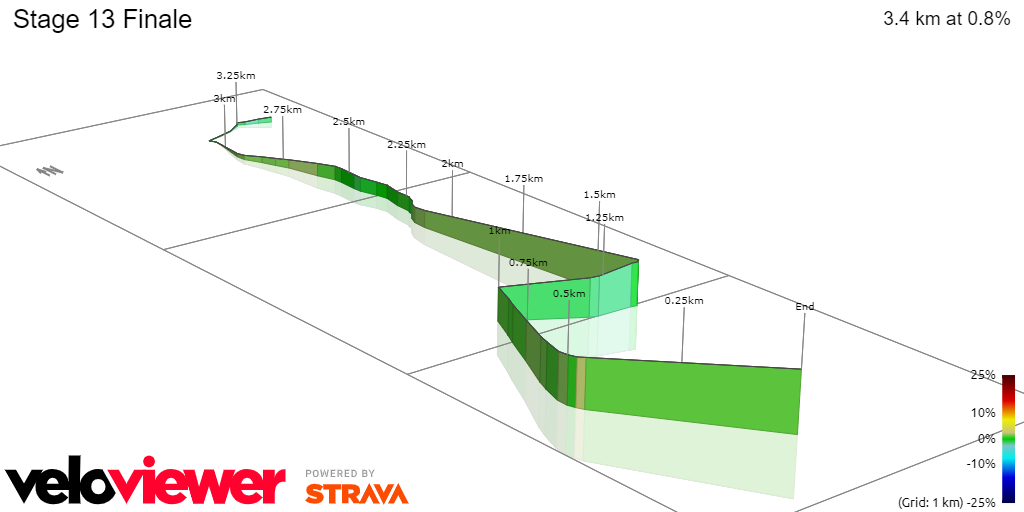 A descent will then follow another gentle rise, with a peak having 1.5Km at 4.9% finishing with only 8.5 kilometers to go. This is a stage where the sprinters who struggle uphill will have little chances, however a bunch sprint is the expected scenario in Saint-Étienne between those who don’t. The finale is relatively technical, albeit with a slight uphill tilt which will mean the sprinters will have a relatively clear run to the line. 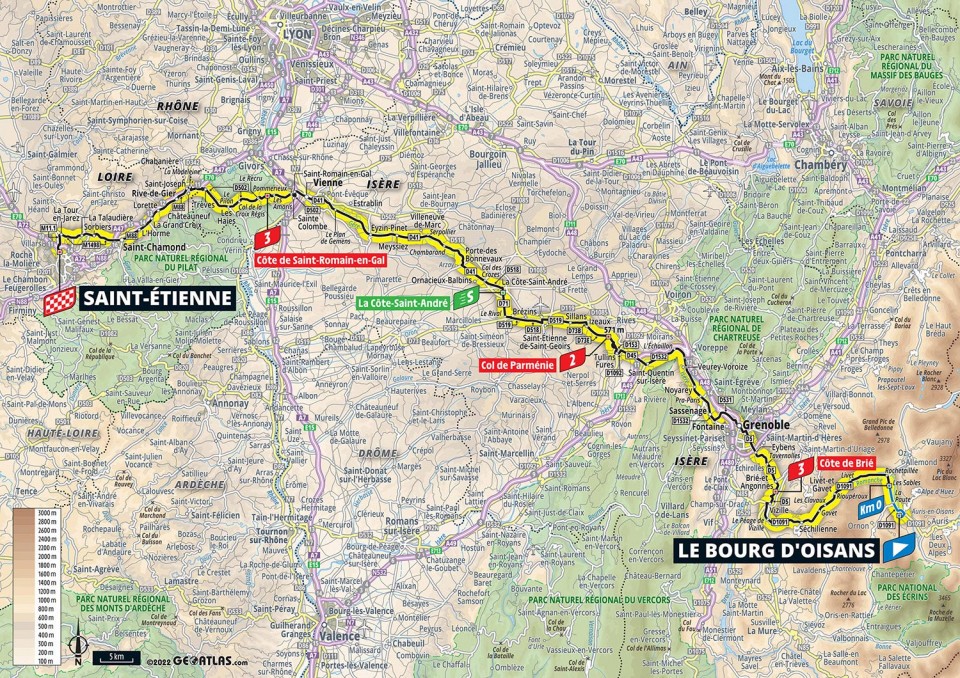 The temperatures will come be very high, into the 30’s – and much worst inside the peloton – and there will be a breeze from the north which should see a crosswind from the right throughout most of the stage. This will favour the breakaway, with the heat being another serious obstacle for the riders.

I think Quick-Step and likely at least one more team will try to control the race, but I think the break will succeed. This deep into the race there are many more riders aware of the legs they have and with freedom. Such a rolling stage with a tough hilltop early on can see a strong group go up the road, which should be very hard to bring back.

Wout van Aert – Van Aert is in possession of the green jersey and it seems secure. With two wins already (for WVA) and a yellow jersey to defend, Van Aert and Jumbo-Visma have no need to work for another one. However van Aert will be comfortable in the climbing, but in any scenario of a sprint he will be present.

Jasper Philipsen – Philipsen has looked very fast, but contrary to his expertise he’s suffered a bit with positioning. A hilly day will favour him however as some men may not be in contention, and leadouts will be reduced. This will favour the Belgian who is yet to take a win here.

Pure Sprinters – In here I include the three obvious names which are Fabio Jakobsen, Caleb Ewan and Dylan Groenewegen. All have struggled deeply in the climbs so far in the race. It’s not a brutal day, but there is climbing that can be taken advantage of so as to drop them, and the pace will need to be high all day long to control the attacks that are inevitable.

You should also see Mads Pedersen, Danny van Poppel, Peter Sagan and Hugo Hofstetter as riders who should be able to ride a finale like this very well, and could take the stage win. Michael Matthews, Luca Mozzato, Magnus Cort Nielsen and Christophe Laporte – if he gets freedom – can also play a role in the fight, specially if the pace is hard throughout the day.

The likes of Alberto Dainese and Alexander Kristoff will not have an easy day, but it’s this kind of tactically unpredictable day that can benefit them. This will be a dangerous day because of that exactly however, a breakaway can be set in different situations, and the finale is also very rolling, which is certain to spark a lot of ambitions and ideas for the rouleurs and some puncheurs.

#14 Sepp Kuss – You’ve done a good work so far Sepp, today we can relax a bit. The guys will take care of the race and keep it safe, you just make sure to stay with Jonas throughout the day, and then save the legs through the final kilometers.

#144 Stefan Bissegger – We have to go for the stage today! You, Alberto, Magnus and Jonas all have your chances, so early in the day it’s important to attack hard and get men in front. For you, the climbing won’t be so easy, so make sure you try and anticipate the first of the day. If you manage to be in the breakaway indeed the strategy for you is the same, attack early and take advantage of the possible lack of collaboration behind.

#54 Mattia Cattaneo – It isn’t a bad day for you Mattia, but we must stay safe in the peloton and try to get Fabio into the win. It won’t be easy, but we have to prevent a strong group from going up the road, and then do damage control, try to keep him well positioned and survive on the climbs, trying to set up a sprint.

A win for the breakaway is my guess and it shall be for Alberto Bettiol of EF Education-EasyPost. The team have several options and seem to have no interest in a sprint. Alongside Cort Nielsen and Bissegger the American team can chase another win and have a lot of weapons to use on such a suiting day.