The first day in the Pyrenees delivered action, as the breakaway fought for the stage win and it was Hugo Houle who succeeded, attacking in the descent of the Port de Lers and riding a strong section in the climbs to make the difference and take a career-changing win. Valentin Madouas and Michael Woods completed the podium.

In the GC fight once again Tadej Pogacar attempted some moves on the Port de Lers, however without success as Jonas Vingegaard once again resisted the attacks to keep the gap in the yellow jersey fight intact.

Positive: Houle taking a massive win, and the first/third bringing in important points for Israel. Aleksandr Vlasov got himself in the breakaway and has climbed up the GC with the successful move.

Negative: Romain Bardet and Adam Yates shed some time after a complicated time in the final climb. 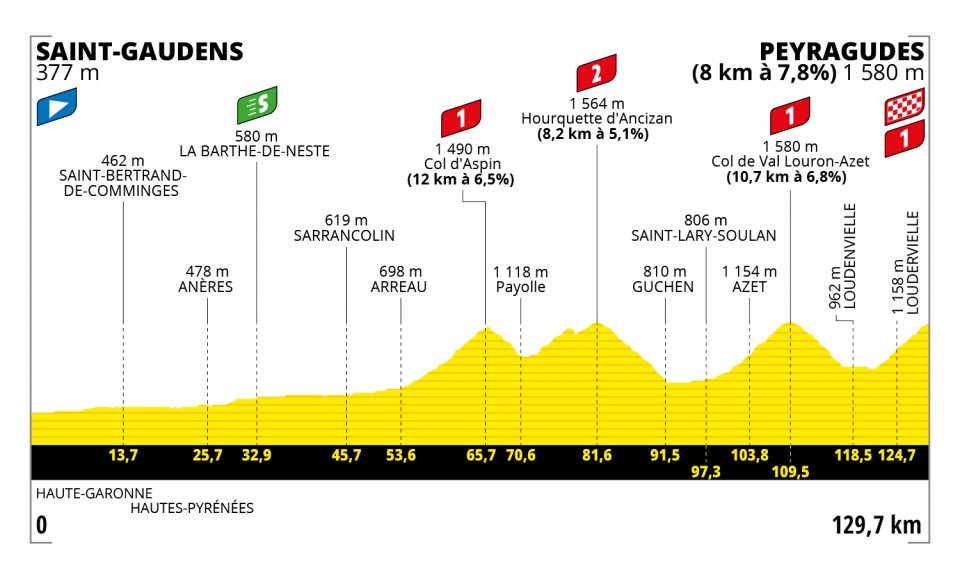 Stage 17 is a very short day, however with quite a lot of climbing making up to it. The second day in the Pyrenees, with some of the classics back on the route. In store will be only 130 kilometers, with the first 50 being pan-flat meaning that very early on in the day the riders will approach the final set of climbs that will decide the outcome of the stage, and quite possibly change the appearance of the general classification. 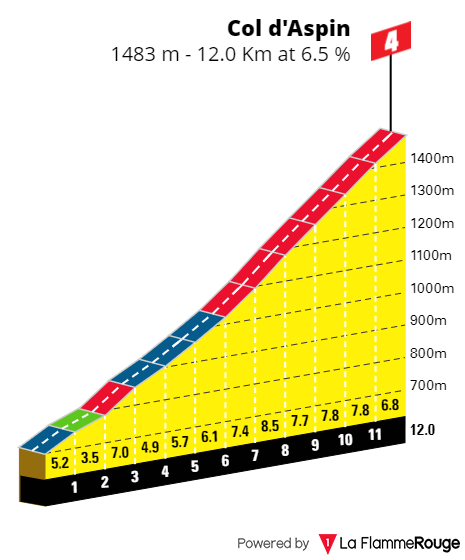 In those last 75 kilometers there are over 3000 meters of climbing. First comes the Col d’Aspin (12Km; 6.5%; 65Km to go) which may see some riders go up the road, although that’s an unlikely scenario. It will get everyone ready for the following ascents. Shortly after the riders will go up the easier vertent of the Hourquette d’Ancizan (8.6Km; 5.1%; 49Km to go). 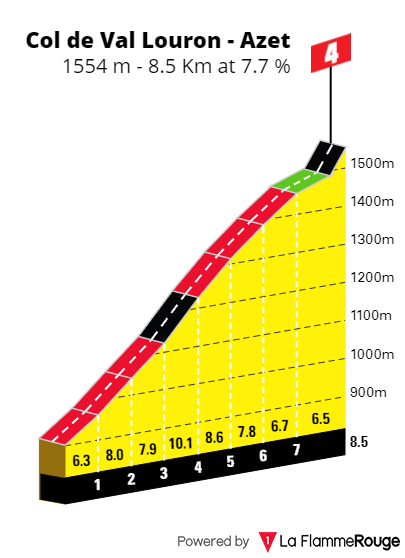 A tricky descent will very quickly see the riders go over another famous climb, the Col de Val Louron-Azet (8.5Km; 7.7%; 21Km to go). Will this climb see much action? Unlikely due to the final climb, however the very technical descent may stimulate some move, or get some pressure being put on some riders, perhaps strategical racing with riders from the breakaway dropping back. 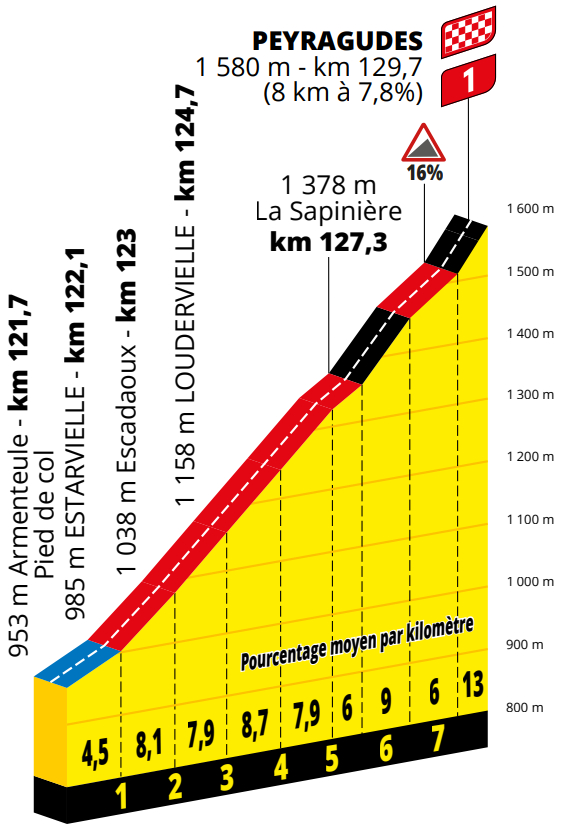 The final climb though should be the decisive feature. Instead of riding towards the summit of the Col de Peyresourde, this year the peloton will head into Peyragudes, with the finale positioned in the Altiport – the third of it’s kind throughout the race. It’s not a brutal climb, largely similar to the ones tackled beforehand with 8.1Km at 7.2% average gradient. What makes the difference is the altiport section in the final meters of the stage, in which the riders go deep into double-digit gradients in a grueling dash to the line. 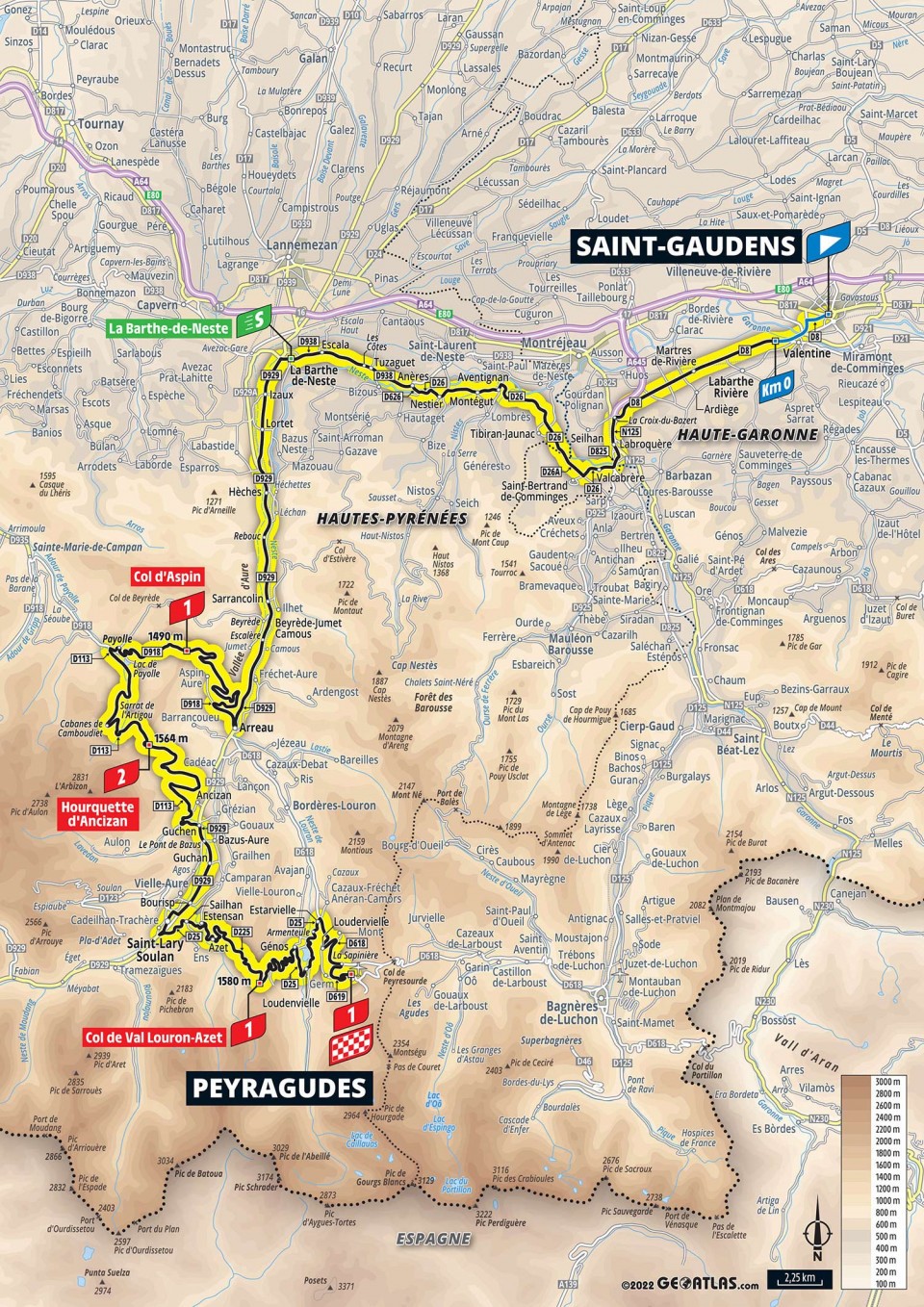 The temperature will soothe, making for a less draining day. Nothing to note besides that however, normal mountain weather.

The scenario should be exactly the same as today’s, with a large breakaway going up the road as no team can or will want to control. However the stage is very small, and very mountainous, so the GC riders do stand a chance to fight for the day here.

Jonas Vingegard & Tadej Pogacar – There will no doubt be another battle between the two, likely to see very little or no gaps as Vingegaard has managed to respond to every attack the Slovenian has thrown. Neither UAE or Jumbo will fight for the stage, as the focus will be on taking time on each other.

Nairo Quintana – Outside of those two, Quintana has looked the best man today and in the mountains he will be a great rider to chase wins, as he may have freedom, if the peloton gets to fight for the stage win.

For the rest of the GC riders, they seem a whole level below the Top 2. Geraint Thomas, Adam Yates and David Gaudu seem to be the riders with legs to be able to try and do something, with the rest likely to try and survive and move up the GC with a more constant ride – the flat start doesn’t give the opportunity to surprise.

Feelings in the day, luck when getting in a breakaway and tactics used will be very important. More and more we’ve been seeing early attacks succeeding, so having riders behind to cover moves and deorganize chases will be very important and may be the key for the stage win, favouring some.

#86 Dylan Teuns – Today was your day Dylan, the legs just aren’t there so honestly you’re better off just staying in the pack, try and save the legs, maybe on the final mountain day you can try again.

#62 Imanol Erviti – Let’s keep Enric protected. He won’t have freedom to go in the break, some of the guys will go up the road but you stay and make sure he stays safe and everyone has their food and water, besides positioning into the climbs for as long as you can.

#211 Franck Bonnamour – Let’s save up Franck, some of the guys will be in front to have our presence. In stage 19 you have a chance to try and surprise, that’s the day we’ll really try to attack.

I’m going for a breakaway win, one for Nick Schultz who has looked brilliant throughout the race, climbing at his best level, and to finally get his win.

Tomorrow’s race has prizes of at least €1000 and an entry fee of only €5. Make good use of your knowledge! https://zweeler.com/game/cycling/FantasyTourdeFrance2022stage17/main.php?ref=790