Wout van Aert won the fourth stage of the Tour de France. The yellow jersey didn’t wait for a sprint however, as the final hilltop saw Jumbo-Visma power through, splitting the peloton to bits, and launching the race leader onto an incredible solo win. He extended his race lead, with Christophe Laporte sprinting to third in the peloton, as Jasper Philipsen rode to second raising his arms in mistake. 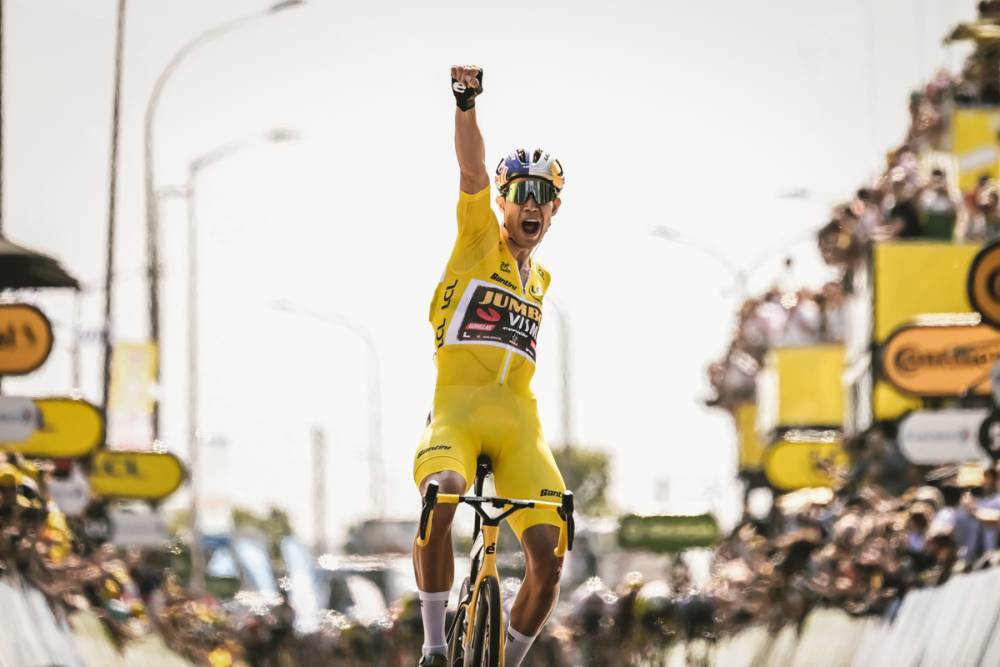 Positive: Jumbo-Visma and Wout van Aert had the perfect strategy. A strong win, and with this van Aert will have much less pressure to chase results for himself.

Negative: Nothing to note, I think nothing could have been done to stop Van Aert. 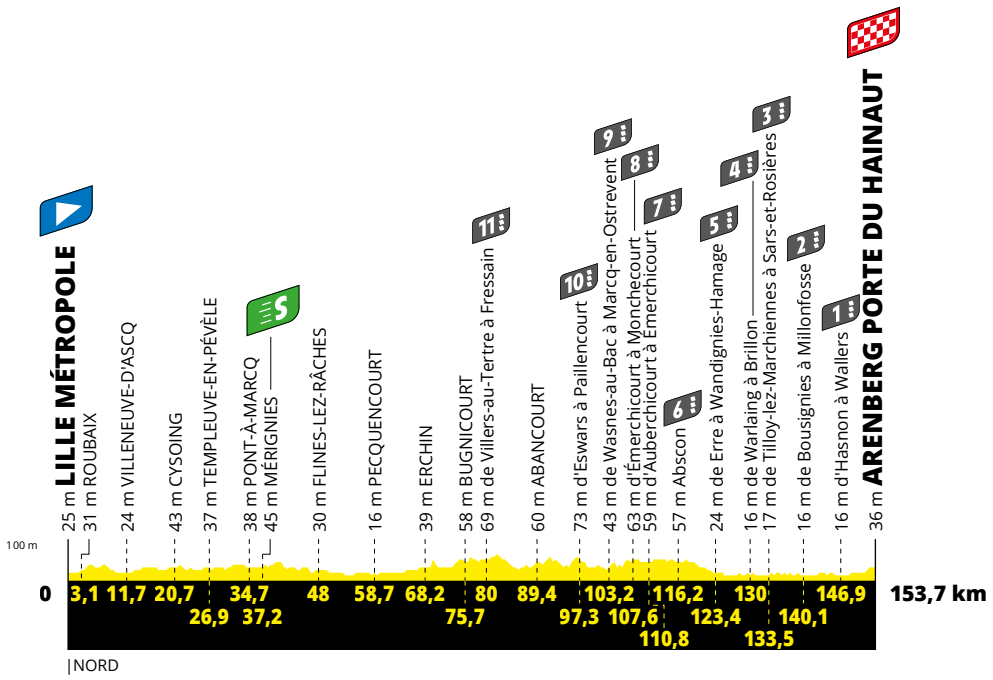 The fifth stage of the Tour de France may be the most tense. Perhaps the first crucial day for the general classification, not because of the attacks that can be made, but more so because of the time that can be lost on the famous cobbles of northern France.

The day will be short and quick, with only 153 kilometers departing from Lille and finishing on the doorstep of the Trouée d’Arenberg – the town of Arenberg Porte du Hainaut. On the way, 19.4 kilometres of cobbled roads, split into 11 sectors mostly throughout the final 55 kilometers of the stage. It will truly be a stage of two halves, with only the intermediate sprint located early in the day, and the second half will be tense, fast and very dangerous.

Unlike Paris-Roubaix, stage win won’t be the only priority for riders here. There will be a yellow jersey on the line, but most importantly the Tour de France. Many riders that will fight for the overall classification will have their full team at disposal, which will include domestiques that are specialists in the cobbles. This will lead into ferocious fights for positioning to the entrance of the sectors, where punctures, mechanicals and crashes are real risks.

The final sectors will come with just five kilometers to go, from which will certainly emerge a fractured race – with some riders fighting for the win whilst others battling for the GC. The finale is simple, with a long straight in Arenberg deciding the stage winner. 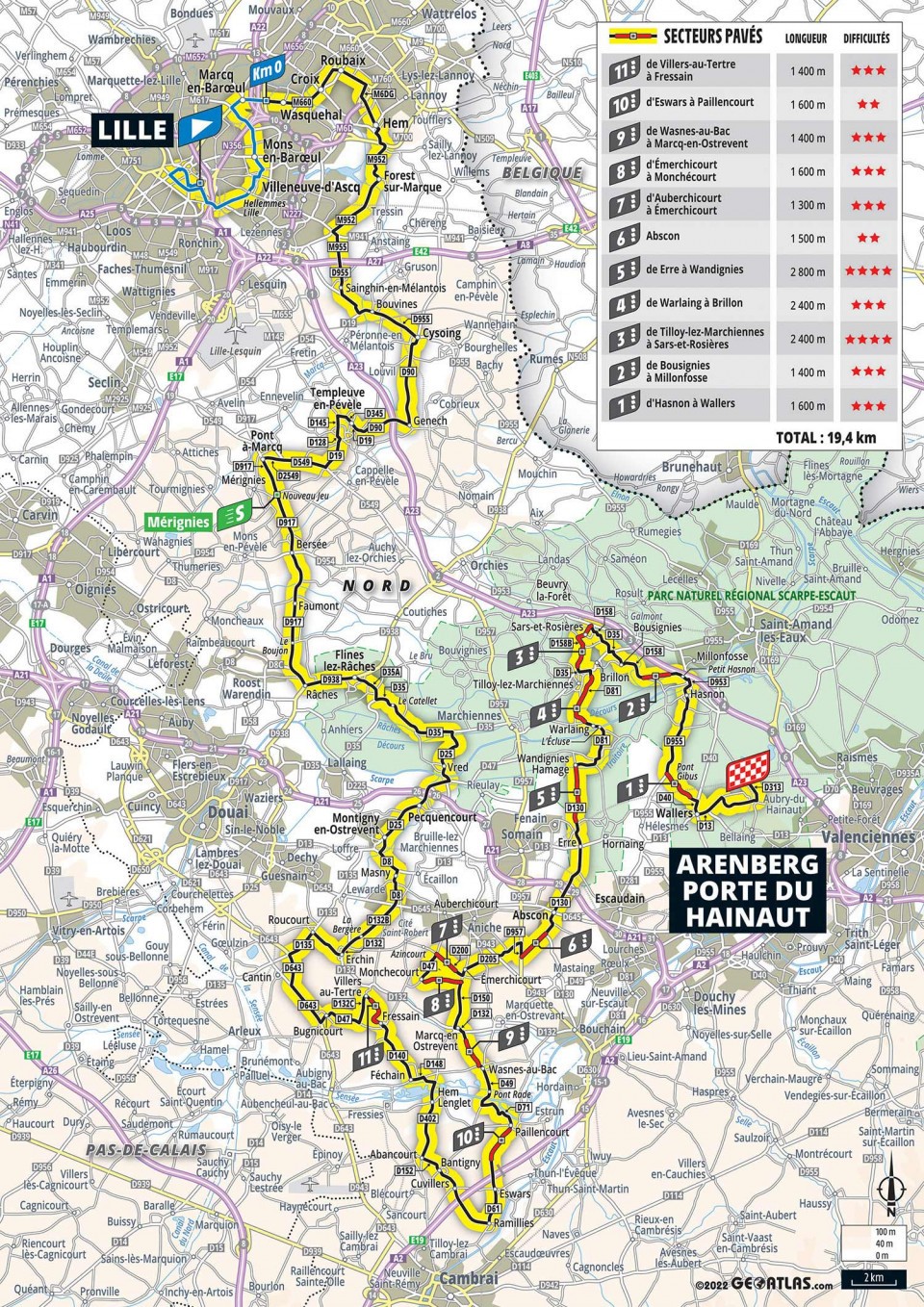 Some warmer temperatures. A bit of a breeze from the northwest, a tailwind early in the day but inside the cobbled sectors the audience will cover most. A lot of direction changes also mean it will be complicated for the win to make a difference.

They exist as the cobbled races can be very treacherous, but tension and pace will be all-time high throughout the whole day into the sectors so it will be hard to see a front group succeed – specially with such little intent on riders forming breakaways so far.

Mathieu van der Poel – Flat cobbles aren’t the best for him, but he’s without a doubt a big favourite. Alpecin doesn’t have the cards to play in the day despite the focus on GC from many of his rivals, but he’s been saving himself and without a doubt will be looking for the win and the yellow jersey.

Mads Pedersen & Jasper Stuyven  – No GC rider to ride for and a yellow jersey to motivate Pedersen. Two strong sprinters, brilliant rouleurs and classics specialists. Trek will be in a good position to fight for the stage win, and both are very valid winners in their own rights.

Quick-Step – The Belgian team has already taken two wins, but they can get a third one. Although they likely miss a leader that has the same level as van der Poel or van Aert, they can make up for it and they seem to have the form they lacked in the classics campaign. Kasper Asgreen isn’t in the best form but will be a dangerous rider, the main cards to play will be French champion Florian Sénéchal and first stage winner Yves Lampaert who are both in great form and will fight for another win.

Matej Mohoric – Bahrain have GC intentions but Mohoric has been clear that he will have the freedom for this day. In April he almost succeeded, here he will have another opportunity. Will have to attack, however that’s the kind of racing that has always earned him the most.

Peter Sagan will also be a name to take into consideration, having looked back to great form over the last few weeks. He, Jasper Philipsen, Alexander Kristoff and Michael Matthews are all sprinters that can be dangerous under some circumstances, and be favoured by alliances with some GC riders.

There will be other riders in domestique duties who could on paper go for the stage win. This doesn’t mean they won’t, but it lessens their chances. Wout van Aert and Christophe Laporte are the obvious names, however so far a spotless team with unmatched power as they will be working for Roglic and Vingegaard. The likes of the ones above, Geraint Thomas, Tadej Pogacar, Jakob Fuglsang and Alexey Lutsenko are honestly all riders who under the right circumstances could end up fighting for the stage win too.

Dylan van Baarle for INEOS, Stefan Küng for Groupama, Nils Politt for BORA, Oliver Naesen for AG2R, Connor Swift and Hugo Hofstetter for Arkéa are all riders that should also have assisting their leaders as maximum priority, although the latter could possibly go for the win if Quintana survives the cobbles.

The main point of the day will be the fight for the overall classification as all climbers will look to prevent their GC stint going down the drain. It will be a chaotic day with many internal battles in the day, with crashes and mechanicals expected, and a whole lot of chaos at the end of the day.

#137 Simone Velasco  – Simone stay safe, there will be other riders to protect Alexey, and it will be very dangerous. We want you for the hilly days, so stay safe.

#77 Benjamin Thomas – Stay safe Benjamin. Same advice many should have, this is a day where you want to avoid crashes and save the legs for better days to come.

#184 Mathieu Burgaudeau – Peter will be trying to go for the stage win. Your days are stages six and eight, stay safe and save up so that you have some more chances. 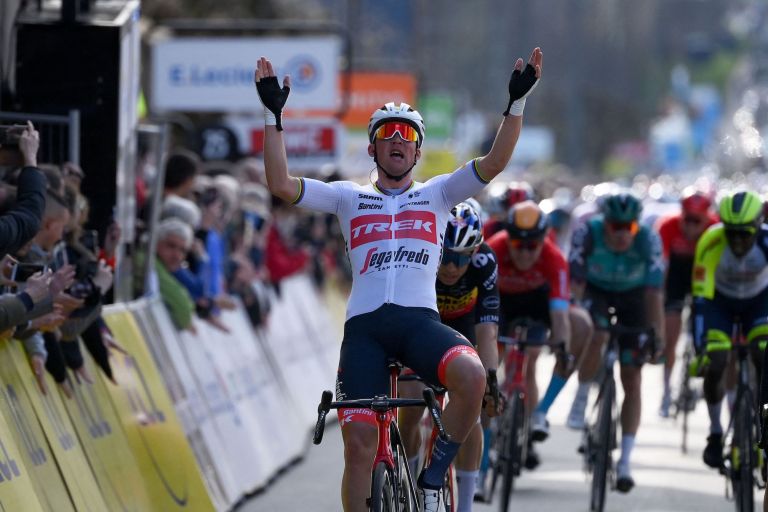 A win for Mads Pedersen in my call. Trek will have 0 GC responsibilities so will race for the win. With a strong team, including Stuyven, Pedersen only has to follow the wheels on the finale and with a strong sprint and resistance, he has a good chance to finally get his win.