Although stage 15 may be the queen stage, the 14th day of racing was dramatic and meaningful at the Vuelta, as the Sierra de la Pandera summit finish saw Remco Evenepoel struggle and loose the time he’s gained on Primoz Roglic after struggling in the ascent. Richard Carapaz joined the day’s breakaway and soared to a second strong stage win, holding off Miguel Angel Lopez and Primoz Roglic who completed the podium and took time on their respective competition.

Positive: Carapaz taking a second win, Lopez showing great form and promise, and Roglic taking time on both Mas and Evenepoel – besides showing his best form.

Negative: Evenepoel did not crack completely but lost meaningful time to Roglic. 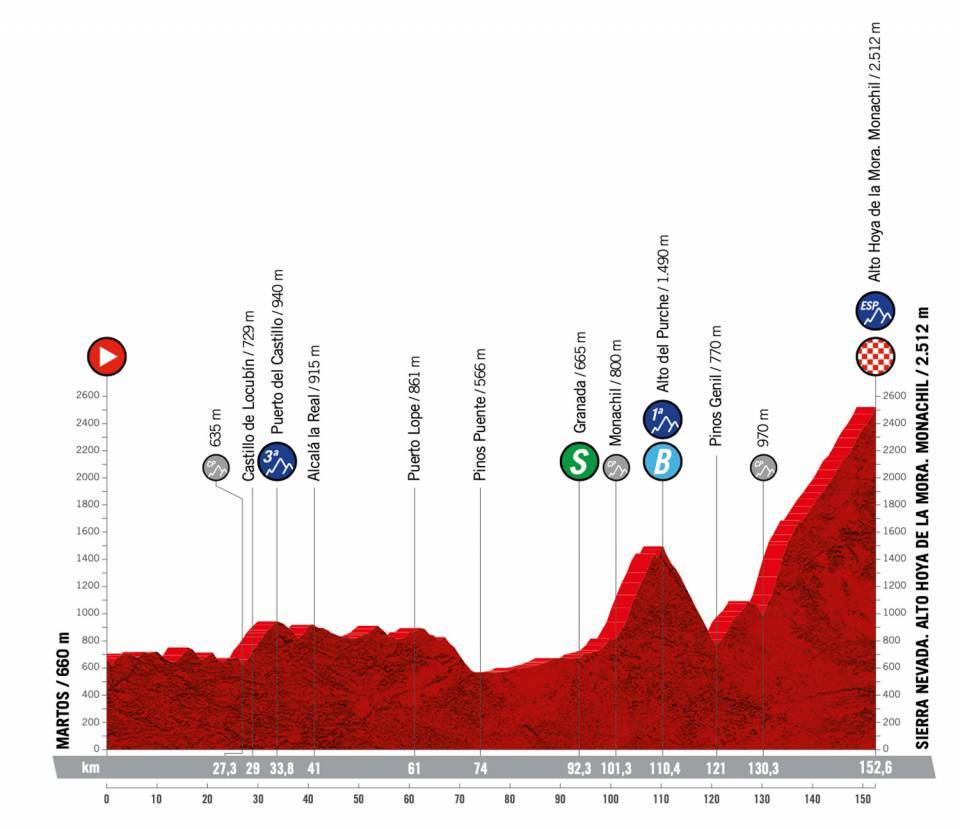 Perhaps the queen stage of the Vuelta a Espana? There will be plenty stages where real gaps can be made, however surely will have this day in mind for a long time, and many will fear the climbs they will face. It is a day where the race can both be won or lost, as it features the terrain for it, with 4000 meters of climbing, mostly packed in the final third.

A short day however with only 150 kilometers on the menu, a rolling start as is typical, and a small climb 34 kilometers away from the start which should set the race into a stable position. The riders will go down to Granada, and the mountains around it will host the finale of the stage. 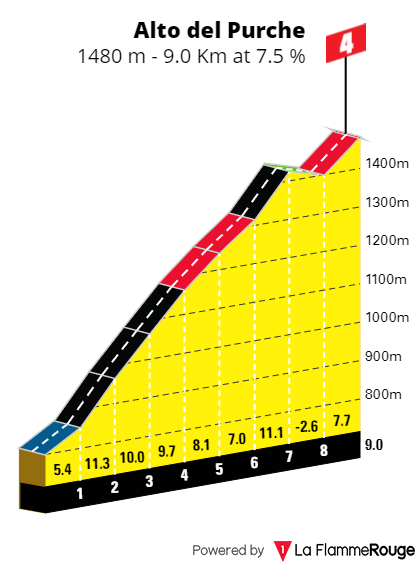 The first ascent will be the Alto del Purche, a familiar climb to the Vuelta a Andalucia, it is 9 kilometers long at 7.5%, however that features a small but steep descent close to the summit. In reality is a climb that 6 kilometers at around 10% gradient, with more inconsistent starts and finishes, a brutal ascent, which summits with 39.2 kilometers to go.

The riders will have little time to recover however. What will follow is a technical descent, immediately onto an uncategorized climb to Guéjar Sierra, where the run-up to the base of the final climb is a very technical and steep little descent, straight into the brutal ramps of the final climb. 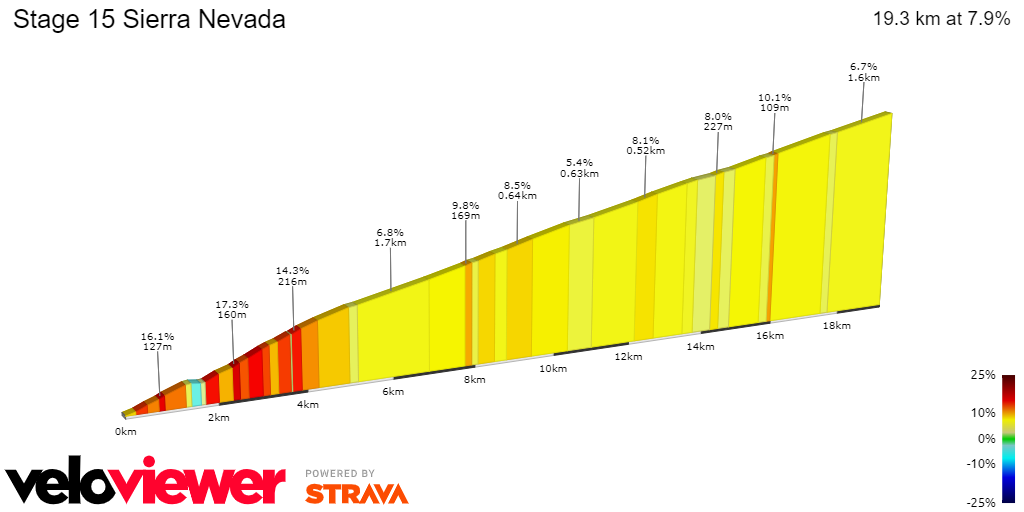 Sierra Nevada will host the finish, but the riders will climb via the Alto de Hazallanas which features it’s first 5 kilometers at over 10% average gradient with countless switchbacks. A very explosive ascent at the bottom, favourable for attacks, however it is a climb that will be almost an hour long and the effort must be managed. The climb is in total 19.4 kilometers long at 7.9%, and after it’s steep start it never features any restbite, and the last third becomes a straightforward ascent with no locations to surprise. A gruelling test of climbing prowess, a day for the pure climbers to show what they’re made of. 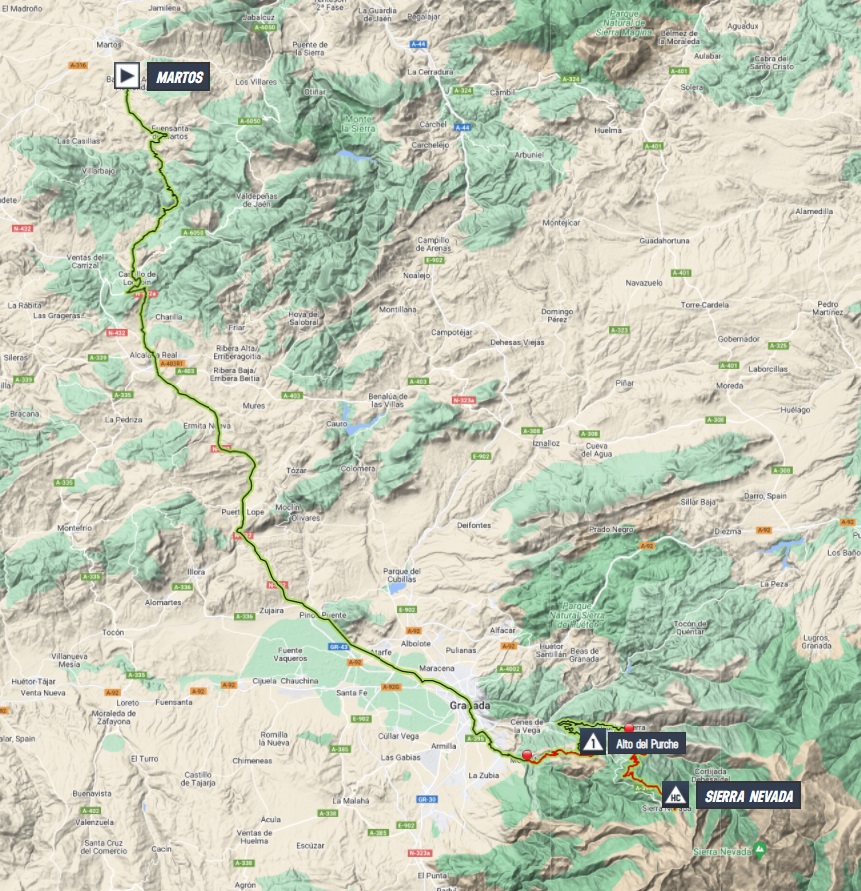 Some southwestern wind, wich will be felt in the high points. This should come as a tailwind for Purche however. In Sierra Nevada the start of the climb won’t be exposed to the wind, but in the final kilometers the riders will find mostly a modestly strong crosswind, gaps will need to be created earlier on in the climb surely.

I don’t think any team in particular will be working to fight for a stage win, but this low percentage is due to the brutality of the final climbs. Do not be mistaken, one of the hardest combos of climbs of the whole 2022 season, and only the very best climbers can fight for a win here. I expect the GC battle to explode early on, gaps to be big, and the breakaway guys will need some buffer into the final climb in order to go for the win.

Remco Evenepoel – What consequences will today have? Evenepoel first looked to be in an urgent situation, but has managed to limit the losses relatively well taking into consideration how it looked at first. However he did loose time on his main rivals, and into what is a gruesome stage tomorrow, it will be a bit of a psychological blow. Besides, it will be a boost to Roglic mainly, but to others aswell who have now seen a crack in his armour. If he can retain red however it will put him in a strong position to head into Madrid with it.

Primoz Roglic – Roglic has put on his best performance of the race so far today. The steep gradients suit him and he will find plenty of that tomorrow. It’s risky to attack early on tomorrow, but it’s possible that he can inflict irreversible damage to Evenepoel if he can replicate today’s ride.

Enric Mas – Mas has looked rock solid in the race so far, until today. Although he’s not lost too much time, having been dropped and cracked in the final kilometers is not the best sign for Mas, who was until now a very big contender for the race win. He’ll have to show the same legs as in the opening week.

Miguel Angel Lopez – On the opposite side you have Lopez, who has shown his best legs today. His second week has been very strong and the Colombian is rising up in the GC, and tomorrow he will have a day perfectly suited to his abilities. Not having the pressure to be covered from the Top3, he may also enjoy some freedom besides the favourable terrain.

The GC battle will expand further, and this will be a key day for everyone. You will see Carlos Rodriguez and Juan Ayuso fight for the fourth place currently. Tao Geoghegan Hart and João Almeida will also be close to the fight with the Portuguese specially putting on a great performance today and great promise into the final mountain stages. Thymen Arensman will also be a man to consider. With such gaps however it is likely that riders outside the Top10 can easily jump in if they have a good day. BORA have Wilco Kelderman and Jai Hindley which will both hope to have a good day in order to keep their Top10 ambitions alive.

As for the breakaway, it is a day for the pure climbers. Within a shot of winning I’d say there is Jay Vine, Richard Carapaz, Mark Padun, Rein Taaramae, Thibaut Pinot, Marc Soler, David de la Cruz, Mikel Landa, Sebastien Reichenbach, Mikel Landa and Mikel Bizkarra. I’d say they all have their chances, but it will mostly come down to how they feel on the day, as there is no room for error or miscalculation. Although the stage is hard it’ll all be about the final climb. It will be around one hour of effort, and the gradients will be brutal from top to bottom.

#48 Danny van Poppel – Just survive Danny! You can climb well, but this will be very hard I won’t lie to you. Make sure you slip into the gruppetto and make it inside the limit.

#157 Joris Nieuwenhuis – Let’s take it easy Joris, it will be a very difficult day, but at the same time there’ll be no fast man to protect. Stay with Thymen throughout the day, take him to a good position into Purche and make sure he’ll be safe if something happens. From there on it’ll be up to him.

#103 Alessandro De Marchi – There’ll be other days Alessandro, we’ll hope you can still get a good day before the race ends, but this isn’t one for you.

A very long ascent with brutal gradients and high altitude. The way his form has been rising, I will go for Miguel Angel Lopez to win what I consider the queen stage, where massive gaps can be created.

Tomorrow’s race has prizes of at least €500 and an entry fee of only €5. Make good use of your knowledge! https://zweeler.com/game/cycling/FantasyVueltaaEspana2022stage15/main.php?ref=790