Stage 19 promised a lot of breakaway action, however the outcome of the day was different as the sprinters took the affairs on the day. The final climb saw a rise of pace from Bahrain and Movistar which thinned down the peloton, however a sprint between the survivors took place. Mads Pedersen took his third win of the race, beating Mads Pedersen and Fred Wright.

Positive: Mads Pedersen taking his third win of the race. 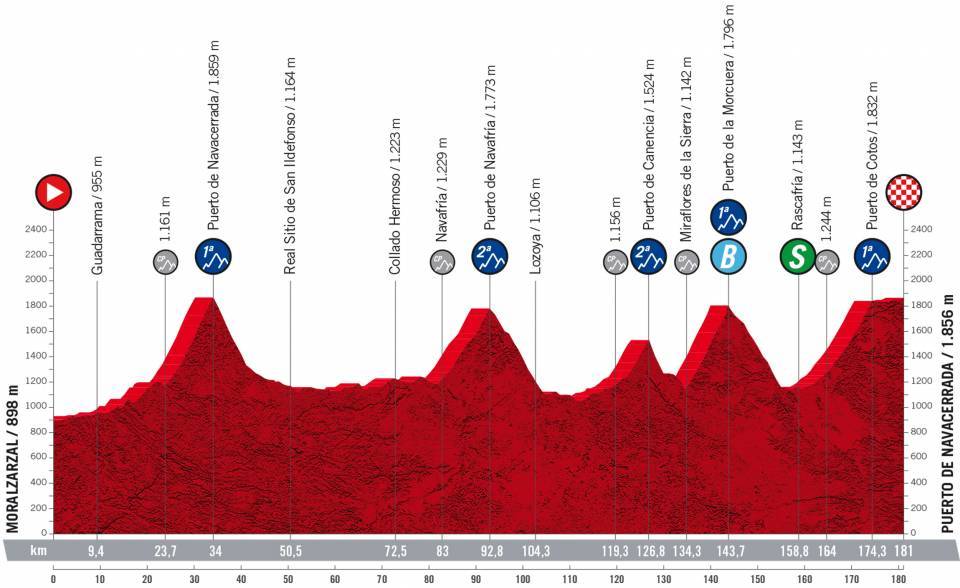 The final mountain stage of the Vuelta. At the end of three weeks of racing it will be a complicated day, but the Sierras de Madrid often offer dramatic race, and with 4000 meters of climbing on the day that will be a make-or-break ride for many. 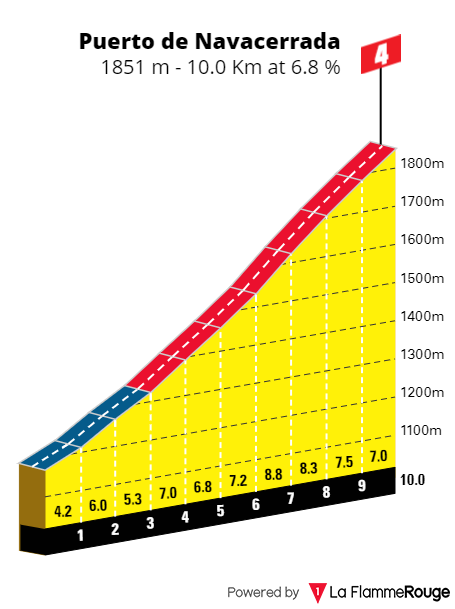 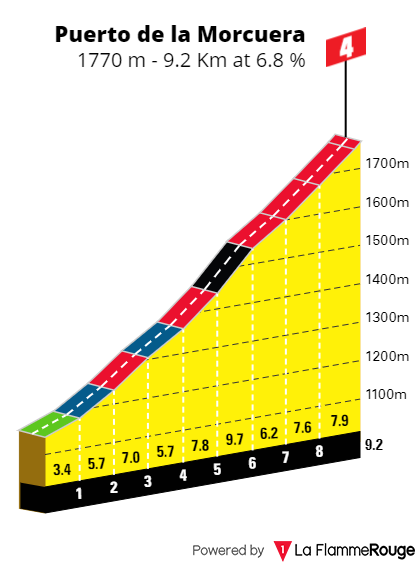 The race willl then enter it’s crucial section, with 54 kilometers to go the riders will go over the Puerto de Canencia (7.3Km, 4.8%) and shortly after the Puerto de Morcuera which has 9.2 kilometers at 6.8%, and a bonus sprint at the summit with 37.7 kilometers to go. It’s perhaps the most difficult climb of the day, and a technical descent follows. It’s an explosive ascent, however there will be another opportunity to create the difference. 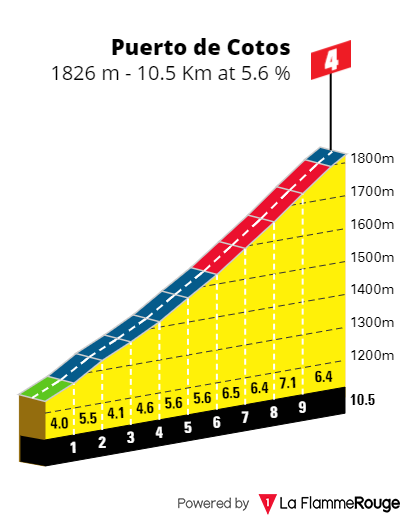 That will be at the Puerto de Cotos, the last serious climb of the race. 10.5 kilometers at 5.6%, not a brutal ascent but this combination saw Tom Dumoulin loose the 2015 Vuelta. This final climb will finish with 6.7 kilometers to go, and a small plateau section will have the riders end the stage in the Puerto de Navacerrada. 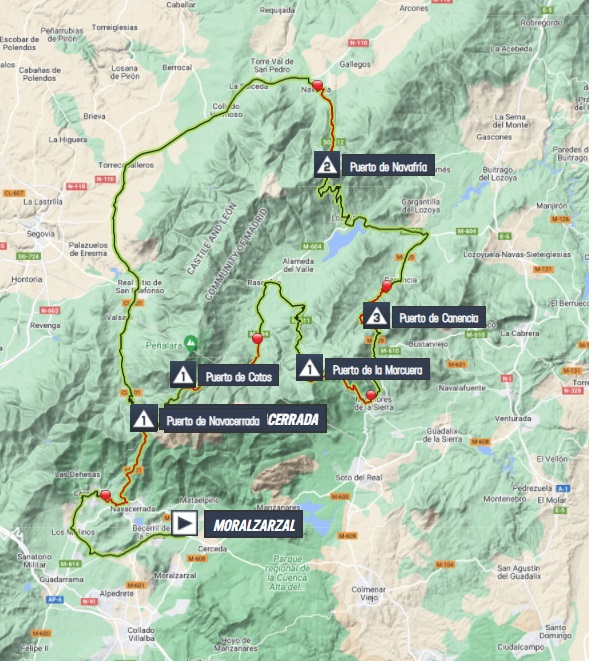 The temperatures will be average, and there will be a small breeze from the south. This will see a tailwind in the first climb which should see some chaos as there will be a battle to get in the breakaway. A headwind in Navafria, tailwind in Morcuera and crosswind in the Puerto de Cotos and run-up to the line may be felt.

The GC fight will surely be all-out. Several riders inside the Top10 have great form and little to loose – but a lot to win – due to their proximity to Juan Ayuso and the podium. The likes of O’Connor, Arensman and Hindley are expected to go on the attack early, which can spur the GC fight to go off early on and never really give much freedom to breakaways. Despite this, most mountain stages have had that finale, and the uphill start is certain to see a very strong group go up the road.

The final mountain stage. The GC battle will take place, and with the climbs not being overly steep I foresee another day which can be chaotic. Thymen Arensman, Rigoberto Uran, Ben O’Connor and Jai Hindley are all inside the Top10 and with high reasons to attack early on, in a day that can see very big gaps if attacked from early on. We have also seen João Almeida on the attack in the last stage, indicating that dropping places down the Top10 does not seem to be a concern for most, specially as the gap to 11th place Louis Meintjes is big.

On the other side you should have Juan Ayuso defending his podium, perhaps with Almeida riding more defensively and protect from attacks that may come from Miguel Ángel López. The big hitting question is if Remco Evenepoel can survive one final day in the mountains against Enric Mas. All signs seem to point to the idea that he will, however the race is only over when it’s over.

Louis Meintjes and Jan Polanc have been fighting for a possible Top10 and with nothing to loose they will surely give it a try again. This is not necessarily a day solely for the pure climbers, but it is likely to be won by one.

Richard Carapaz is likely to be in front to protect his KOM classification. Wilco Kelderman, Tao Geoghegan Hart, Mikel Landa, Thibaut Pinot, Gino Mäder, David de la Cruz, Marc Soler, Sergio Higuita, Élie Gesbert, Robert Gesink and José Manuel Diaz are all riders who have put on strong performances throughout these three weeks and they will be the main men to consider.

On the 20th stage fatigue will be severe in many. Having fresh legs into the day and having the right tactics throughout the climbs will be crucial, and the day’s outcome will need to have all those details nailed to perfection.

#151 Thymen Arensman – Thymen, you have over 5 minutes to 11th place, so a Top10 is virtually secured. You’ve got good legs and your form is also very good, you’ve taken a great stage win but we can hunt for more. We want you to try and get in the breakaway early on, as the KOM jersey is very much within reach. Above all the difference between 8th and 10th isn’t meaningful, but you are not far from the podium, only 3 minutes behind! It’s a day that can reward attackers and we want you to give it a good go.

#14 Bob Jungels – Our strategy will be to see Ben attack, preferencially close to the summit of the first climb. We want you in front beforehand, and perhaps be there to bridge across, and then assist him to boost his chances to fight for a stage and maybe go up the GC.

#33 Gino Mäder – You and Mikel attack early in the first climb and get in the break. All the guys will have the indication to go all-out and help you too. You can both do very well on this day as you’re carrying good form, and I expect you to make it to the front, and match the best riders throughout the day in the climbs. Don’t be shy of counter-attacking early moves if they seem dangerous, the final climb isn’t overly hard so it’s important to always be in front.

I expect the breakaway to succeed on this final mountainous day of the Vuelta a Espana, however with an incredibly exciting GC day. Mikel Landa will be my option to win it, he has been under my radar to win in the final week for around a month, and he has already shown to have the form over the last few days to take the win on this final day.

Tomorrow’s race has prizes of at least €500 and an entry fee of only €5. Make good use of your knowledge! https://zweeler.com/game/cycling/FantasyVueltaaEspana2022stage20/main.php?ref=790