We’re off to the Basque Country for one of the best races in the calendar. 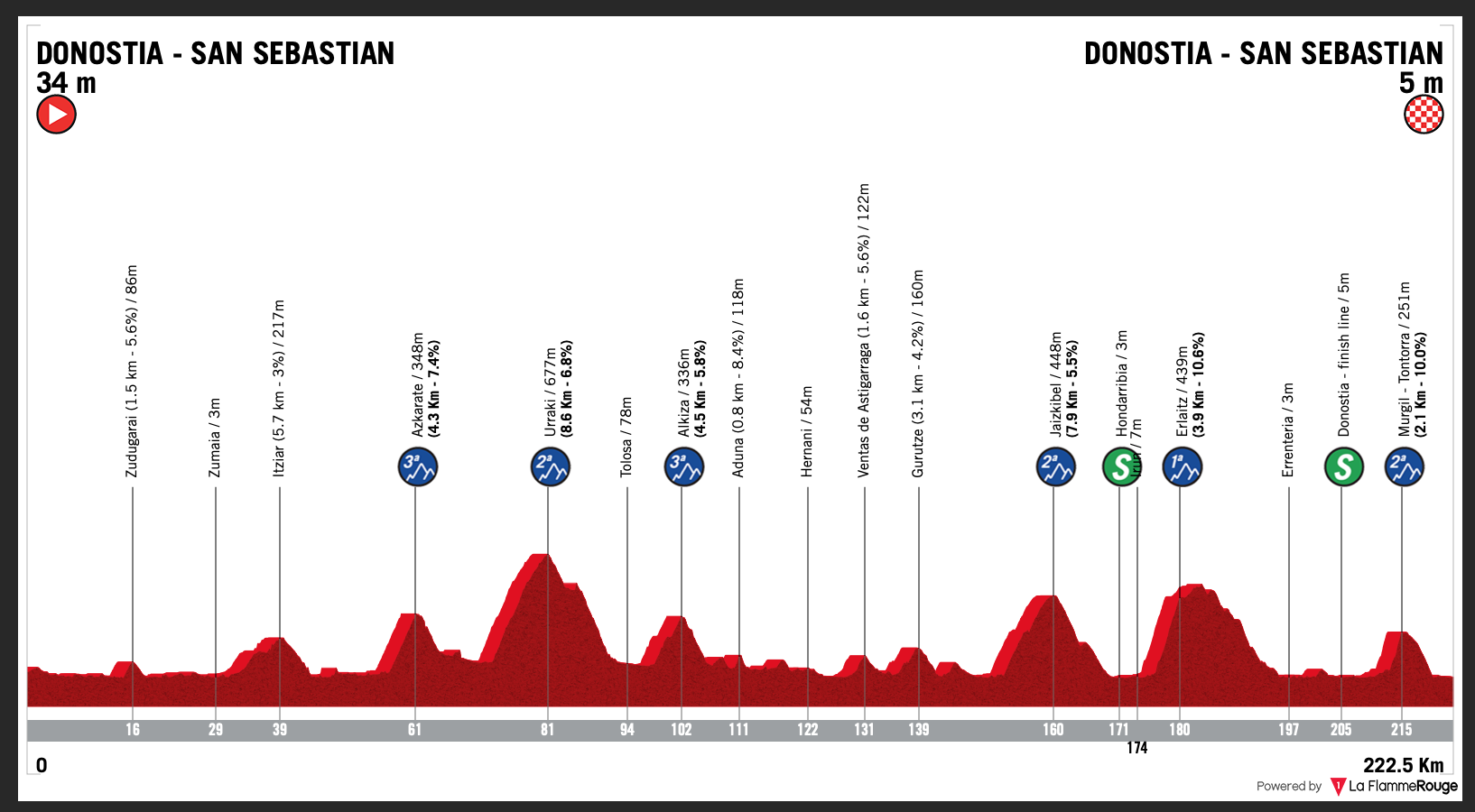 The organisers have tinkered with the route. Back in 2019 they decided to basically do two ascents of the final muro, making the route much harder. This year they’ve decided to go back to just one ascent of Murgil Tontorra but keep the Erlaitz climb in the race. This climb was also brought into the race in 2019, it significantly increases the difficulty of the day. If you remember back to the Tour of the Basque Country from earlier in the year, you’ll know this climb. It was the day Ion Izagirre won, with Jonas Vingegaard setting a fierce pace up the Erlaitz climb.

Cloudy with a chance of rain.

The Jaizkibel is a legendary climb. It might not be the hardest, but we’ll see some riders dropped on the early slopes.

The Erlaitz climb is horrible, it rarely drops below 10%. This will be used to seriously slim down the peloton, but it’s too far from the finish to see attacks from the big guns.

I love this climb! It should be the critical point in the race, I can’t wait to see the fans going bonkers as the riders pass. Once over the top we have a fast decent back into town.

Will anyone dare to make a big move on Erlaitz? It certainly is hard enough, but the distance to the finish means that a solo rider won’t survive, it needs to be a group of 5 or 6 riders. Getting the right group together is very tough, a few teams always miss out and will chase it down. Like in previous years, not 2019, I expect a big showdown on the final climb, it’s what the race deserves.

The final climb makes the selection, but how many riders in the front group changes from year to year. If you manage to get a teammate in the front group, you have a great chance of taking the win. The descent for home is fast, but not technical, it’s difficult to create gaps. It is possible to solo from the final climb, but it’s not something we see very often. The most likely scenario is a sprint from a group of between 2 and 5 riders, that’s why Alaphilippe starts as the favourite.

Julian Alaphilippe – he starts as the big favourite, and quite rightly so. He won here in 2018, it’s a race that really suits his powerful kick. Deceuninck – Quick Step arrive with a strong team to support him; he won’t have to put his nose in the wind until the final climb. His Tour de France started with a bang, his win in the opening stage was wonderful, but he failed to maintain that momentum throughout the race. After a short break I think we’ll see him back to his very best and challenging for the win. If it gets tactical and everyone looks at him, keep an eye out for Mattia Cattaneo, he’s on fire just now.

Jonas Vingegaard – second place in the Tour was beyond anyone’s wildest dreams, but he deserved it. The young Dane has now taken a huge step forward in terms of his progression, I’m excited to see where he can go next. His result was a surprise, but when you look back at his 2021 results you could see it coming. He won a stage in the UAE Tour, two stages and the GC in Coppi e Bartali, 2nd place on GC in the Basque Country and 2nd place in the final stage of the Dauphiné, the signs were there for all to see. This was his first Tour de France, we’ll have to see how his legs will respond, there is no guarantee he’ll still have the same level, but if he does, he can win this race.

Diego Ulissi – 4th place on Sega di Ala is still the most surprising result of the season for me. That day he was 3rd from the GC group, ahead of Caruso and Bernal, it was an insane result. Since then, he’s enjoyed a fine run of form, winning a stage and 2nd in the GC in the Tour of Slovenia and 1st in GC of Settimana Ciclistica Italiana. This is a race he should do well in, but he never has. I think this year we’ll see him fighting for the win.

Ineos – they arrive with a very strong squad. Bernal and Martínez are back racing, their first outing since the Giro. They’ll likely be riding in support of Yates and Moscon, but you never know. Yates was in the front group in Tokyo, one of only two non-Tour riders to do so. Yates will provide the team with a strong option, but they also have Moscon who has been riding well recently. Ineos are one of the few teams who could go long, but this will depend on the current shape of their Colombians.

Bauke Mollema – after flying to Tokyo, taking part in a brutal race, and then flying home again his preparation is far from ideal. As you’ll all know this is a race Mollema loves, his record here is very impressive, but I’d be amazed if he’s challenging for the win after taking part in the Olympics.

Mark Padun – the mythical Mark Padun! After his jaw dropping performance at the Dauphiné he wasn’t selected for the Tour de France, that raised a few eyebrows. After a short break he returned to racing in Italy, but he was nowhere near his Dauphiné level. I’m not sure this is a race that suits his characteristics, I see him as a stage racer.

Simon Yates – what’s left in his tank? After the Giro, 13 stages of the Tour, a hard crash, a flight to Tokyo, the road race and then a flight home he’s surely going to be knackered. I’d be amazed to see him challenging for the win.

Ben Hermans – the experienced Belgian is enjoying a good run of form. He won Appennino, was 3rd in Lugano and then was fighting with the best in Settimana Ciclistica Italiana. What I like about Hermans is his attacking style, he’s not afraid to take a risk and go long. Winning in this field will be hard but not impossible.

Wilco Kelderman – another rider who’ll be feeling a little on the tired side. 5th in the Tour was a brilliant result for him, but he looked cooked in the Tokyo road race. Bora – hansgrohe arrive with a strong team, I think the road will decide which of Kelderman, Konrad, Aleotti, Fabbro and Schelling will be protected.

How strong is Alaphilippe going to be? Is this race a big target for him or is it now all about preparing for the worlds? Sometimes you can overthink these things, I’ll take a win for Julian Alaphilippe.