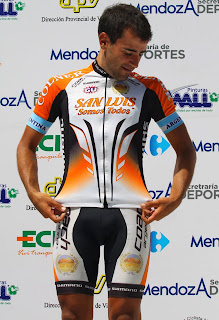 Few cyclists in a more unjust than the Salta Dani Diaz and not be part of the San Luis us all a bad thing, quite the contrary, but Diaz is running World Tour level, as only a bureaucratic issue sidelined him of the top flight, when GEOX got to the end of the season and left haphazardly to Matxin and company.

Diaz stressed very young and in Argentina and won with 19 years in the Twin Bragado, a national test most prestigious stages, over Antogna Fernando and Juan Curuchet, then disappear for a while, which was dedicated training in rising to meet the European adventure with garantías.Y well he did, enlisted in the ranks of the Coffee-Baqué, “Dani” was the rage in the Spanish amateur season in which he won the Tour eg the Madrid U23, rising to Urraki and two stages in the Tour of Navarra, in addition to starring in each jurisdiction in which it took part.

These results earned him a test run in the Footon-Servetto which debuted at the Circuito de Getxo won the mountain classification, and then participate without clash in Round Three Valleys Varesinos to Burgos.Conformes with salteño but rather in professional staff, the Matxin decided to sign him for the 2012 season and while foguearon in the French squad with La Pomme Marseille happened throughout 2011, but always leaving winless flashes of his misfortune calidad.La was primed with the Argentine, and GEOX’s disappearance at the end of this year closed the doors to Europe and hit hard on the morale of Salta cyclist, who also chose the country and gladly accepted the offer of the new Continental team San Luis We Todos.Su journey in training ” puntana “has been excellent, highlighting the Tour de San Luis 2012, which finished third on the road (then climbed a place Contador’s disqualification), came second after the Spanish in the 5th stage with arrival up to Viewpoint Sol, with ramps slope above 8% in the third and 5th also won the Pinto, with arrival at the Mirador del Potrero de los Funes.

Time trial is not a star, but argue if fit, as evidenced by the little over a minute lost with Leipheimer in that race, but otherwise finished 20th in the latest round in Bolivia where there to take into account the height Diaz, who is currently in Mendoza for the dispute of the Tour of Lavalle, ran the challenging round in stages Bolivian last week and won the first sector of the 9th national day, ending coincidentally 9th no overall and second in the standings for the Argentine cycling jewel puntos.La continue with the schedule of his squad, which has taken him to Colombia Back in evidence most prominent, and aim to show their worth in the ma 7th Tour de San Luis in 2013, with hopes of drawing the attention of the powerful structures of the World Tour.