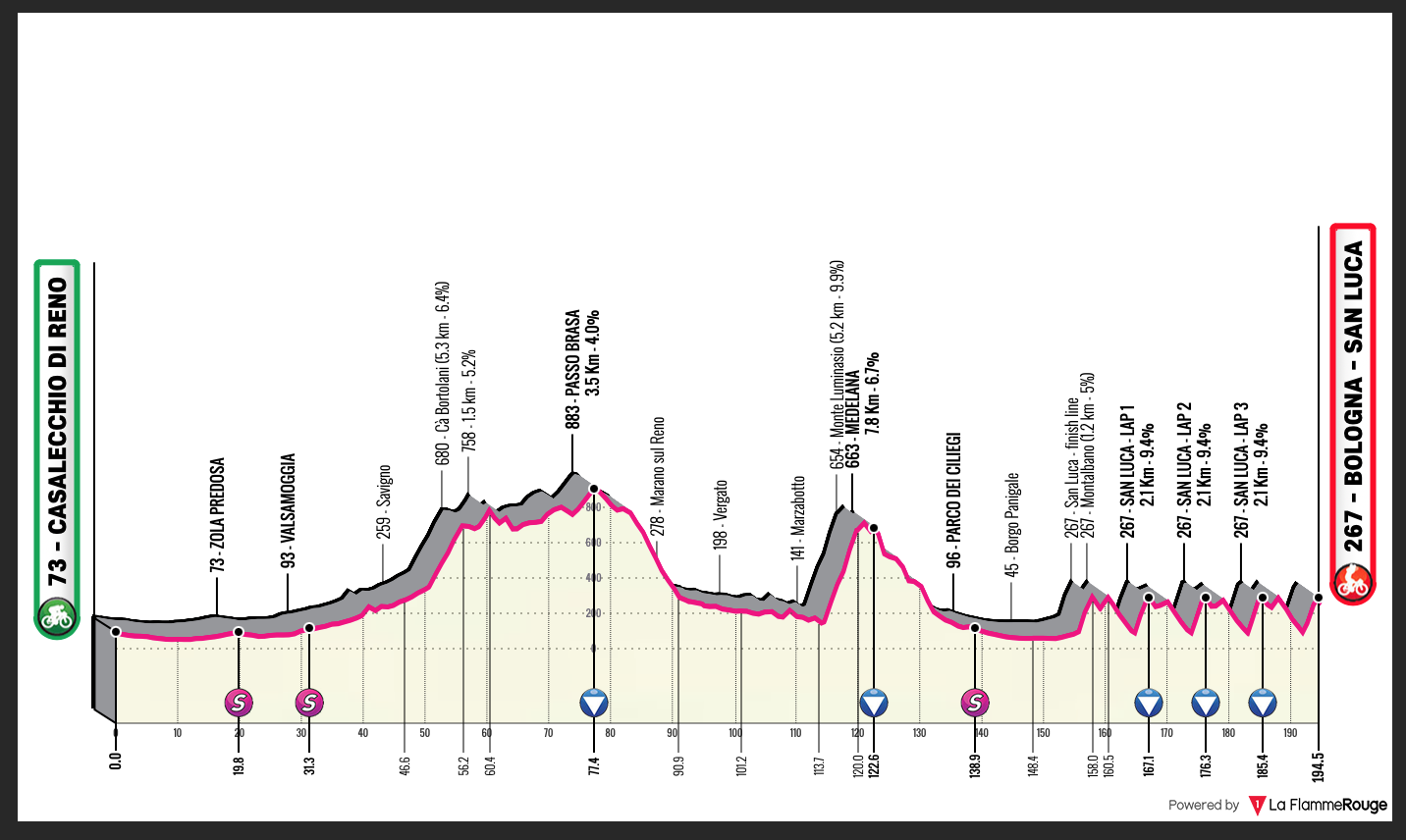 The end of the season is fast approaching, that means our usual series of one-day races in Italy. First up, the beautiful Giro dell’Emilia, and this year it’s harder than usual. The organisers have decided to insert a rather tasty looking climb before the usual lap circuit in San Luca, that will liven up proceedings, and ensure less men to chase in the circuit.

Not a bad day for this time of the year. Lots of cloud, not much wind and nice temperatures.

The climb does crest with around 75km to go, but it will still have an impact on the race. We’re unlikely to see big attacks, but the difficulty of the climb will mean some riders will have less energy left for the big finale.

A climb we all know well, that opening TT in the Giro still gives me goosebumps. We have five ascents of this leg breaker; the history books tell us that the winning move can sometimes go early.

What type of race do the big teams want? Jumbo-Visma, UAE, and Deceuninck are very strong, in fact they are ridiculously strong for a race like this. They’ll dictate the pace of the race, and it should be altogether when we hit the lap circuit, that’s when the fun begins.

With all these teams having second and third options it increases the chances of a group getting clear before the final lap. If the move contains the big teams, the smaller squads won’t have the firepower to chase it down, this is a very tricky race for the weaker teams to cause a surprise.

I expect to see groups attack and get chased down in the opening couple of laps, by that time the front group will be small, and a strong attack could escape and not come back. The likes of Roglič and Pogačar would like to win, but their focus is on Il Lombardia and getting racing kilometres in the legs. This is a perfect opportunity to reward their loyal domestiques, but that will only happen if no one chases.

If the late moves are nullified, we’ll get a huge battle the final time up San Luca. The brutally steep slopes are immensely difficult, and I love seeing the top stars grind up the hill. In this scenario the strongest man will win, this climb is all about having the best legs.

UAE-Team Emirates – they only have six men, not seven, but they still look incredibly strong. All eyes will be on Pogačar, but Ulissi, Formolo and Hirschi could also land a big result. Pogačar has been slowly building his form over the last month, I think he’ll be back to his best by now. Given the finish, he must start the race as the big favourite, he has the fastest kick of all the main contenders. I think UAE will want to attack early; they have the men to do this. If it all comes back together, then Pogačar will have his fun.

Jumbo-Visma – they have Roglič, Vingegaard and Kuss as serious options considering the gradient of the San Luca climb. After a sensational Vuelta, Roglič returned to racing at the worlds and looked good. He won here in 2019, it’s a race that suits him very well. Motivation will be high; this is a good opportunity to test the legs before Lombardia. Also looking to impress will be Vingegaard, a rider who’s just returned from a stint at altitude. He’s not done much since the Tour de France, but I expect him to be very strong in this race.

Deceuninck – Quick Step – another team with an embarrassment of riches for this race. Not only do they have Evenepoel but also taking the start line is Almeida, Bagioli and Vansevenant. Both Almeida and Bagioli were close to winning this race last year, but it’s the presence of Remco that will get everyone excited. He had super legs last weekend, if he maintains that form then he’ll be challenging for the win. The San Luca climb is a good one for him, but teams will look to test him on the descent. We’ll have to see how the team approach the race, I would expect to see them attacking, there’s not point simply towing Roglič and Pogačar to the line.

Aleksandr Vlasov – he’s the defending champion, but he’s not got a hope in hell of defending his title. He had a great first half of the season, but the second half has been average at best.

Benoît Cosnefroy – he does like short punchy climbs, but I think he’ll struggle against the calibre of rider here. If we only had one ascent of San Luca, he’d be one of the big favourites, but five ascents will likely be too much for the likeable Frenchman.

Michael Woods – was good in the Tour of Britain and this is a race that suits him. Going up against Pogačar, Roglič and Evenepoel will be incredibly difficult for the Canadian, it’s hard to see him winning.

I think we’ll see a strong group get away on the penultimate climb and fight out the victory, but which of the lieutenants will take the win? I’ll take a win for Jonas Vingegaard.