Another short, but brutal stage. 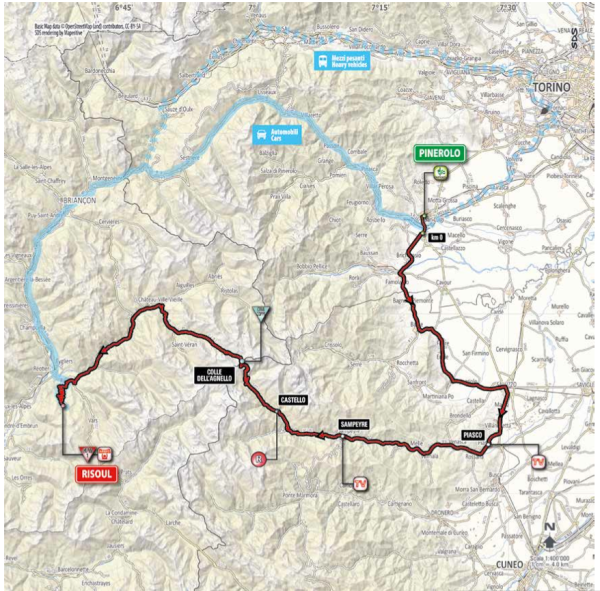 This is a big day for the KOM and GC. We have the Cima Coppi, so all KOM riders will be wanting to make the move. That means Cunego, Denifl, and Atapuma will try to be in the morning break. Taking the prize means an awful lot to the Italian riders, so expect to see plenty of them in the move. Visconti will have to see if he gets permission. Like the first climb, this gets harder the closer you get to the top. The stage might only be 162km, but it features 34km of extreme climbing.

Do the others still believe they can beat Kruijswijk? If so, how can they do that?

Teams have a few options.

They could try getting a few riders in the morning break. They sit in the break and try to avoid doing much work. Back in the peloton, the rest of the team need to keep the break at a reachable level. On the first climb, you hit the front and put everyone into pain. Around 5km from the crest, your main rider attacks and tries to bridge across to the riders in the break. At this point, they will sit up and wait for their captain. They work together on the long descent, hopefully building a big lead. Back in the bunch, Kruijswijk, should have no teammates and must do all the pulling himself. By the time we reach the final climb, he is exhausted and blows.

Set a strong pace on the first climb, but you need to still have 4 riders for the descent. Once on the last climb, each man takes turns at increasing the pace, in the hope of putting Kruijswijk into difficulty. The captain attacks and hopes that Kruijswijk cannot follow.

Get rid of all the Jumbo boys on the first climb and attack on the descent. Kruijswijk is a little vulnerable on the downhill.

Pray Kruijswijk has a bad day!

Steven Kruijswijk – clearly the man to beat. All winners of GTs like to win a stage; he’s no exception. He was impressive covering all the moves on Tuesday, I expect more of the same. Attack is the best form of defence.

Esteban Chaves – will be out to defend his position on the podium. This has been a huge race for the little Colombian and shows everyone that he is capable of challenging for the biggest titles. His climbing has been good but he got his tactics wrong on Tuesday. That shouldn’t be a problem in this stage.

Ilnur Zakarin – after his crashing problems, the Russian appears to be back on form. He really is an amazing climber and this stage suits him very well. Due to his terrible TT, Kruijswijk, will look to work with Zakarin as he isn’t a real threat to his pink jersey.

Vincenzo Nibali – I can’t write off the shark just yet! He was out of sorts in the 2015 Tour, but fought back to win stage 19. He is the type of rider that can find a good performance when it’s needed the most. His team continue to impress and they will keep the faith.

Astana lead the team classification, with Cannondale and Movistar behind them. The time of your first 3 riders home is added together to get the team time. This means Astana have to be careful and not let Movistar and Cannondale put multiple riders in the break. Astana do have 4 riders who consistently finish high: Kangert, Scarponi, Fuglsang and Nibali. Movistar have to rely on Visconti, Amador and Valverde. Cannondale have Uran, Dombrowski, Formolo and Cardoso. Astana should have enough to win but it does add a subplot to the tactics of the day.

Should be nice but there is a threat of rain for most of the day.

Recent history is not on their side. In the last 3 Giros, the stage that features the Cima Coppi has been won by a GC rider. This is due to the GC battle. As you can see from the tactics above, the GC riders will keep the break close by, that is bad news for the breakaway riders.

However, things can change! Astana are the key team. If they have lost faith in Nibali, they will look towards stage wins. If that is the case, they will go for the break. The other GC teams lack the strength of Astana and don’t have huge numbers to chase. If Astana go for this option, their best hopes are Kangert and Scarponi. Personally, I would love to see the Italian given some freedom.

The break will not survive, thanks to Astana. I can see no other outcome other than a Kruijswijk win.