The Giro begins with a quick blast. 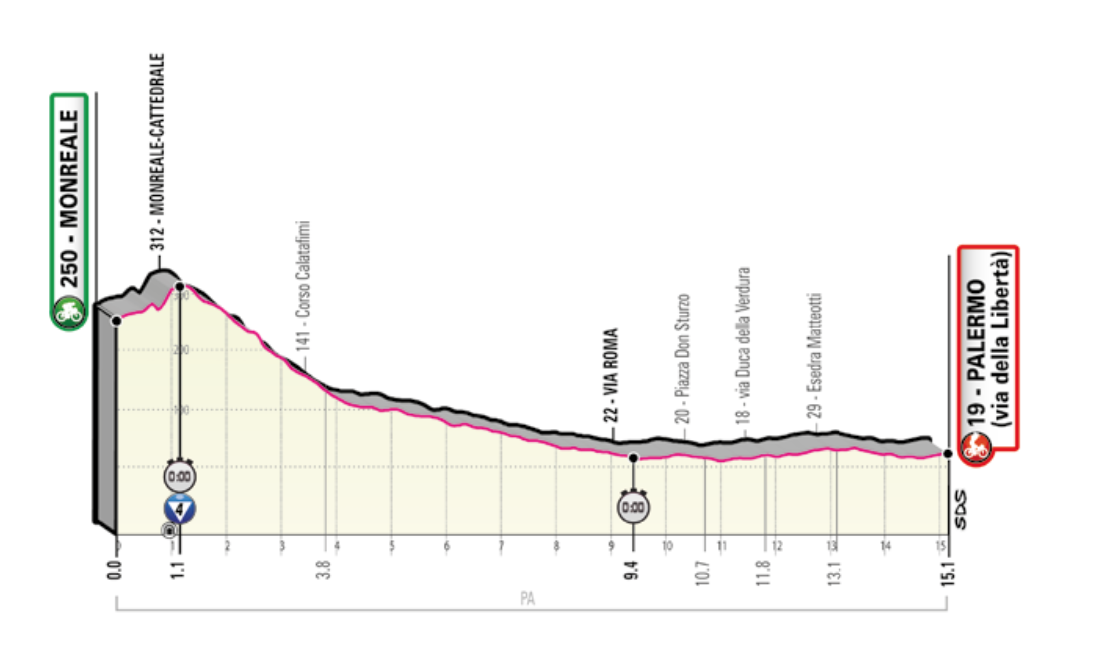 This TT has a little bit of everything. We start with a short climb, some of which is on cobbles, before a very fast descent of around 4km. The road starts to flatten out around the 5km point, but it continues downhill for another 4km, but it’s not very steep. This brings the riders to the final 6km which is flat. This will be a very fast time trial; riders will only need their brakes a couple of times.

Cloudy sun for the start of the race, but the wind will be a problem. We have gusts of 63km/h for the riders out early, but it will be much lighter for the later starters. The wind is coming from the south/southwest which means a cross/tailwind, so the early starters will have a huge advantage. To win the stage, you must have an early start time.

Filippo Ganna – the new world TT champion starts the stage as the overwhelming favourite. His current form is sensational, he wiped the floor with his rivals in Tirreno and the Worlds. This is a huge chance to move into the pink jersey, something that doesn’t happen very often. Riding on home soil, Ganna will be super motivated to win this one. I’m slightly surprised that he’s not going out at the start. As the day progresses the wind does move round to the south-west, which means a full tailwind, but the strength of the wind is less.

Rohan Dennis – currently in the shadow of his teammate, but he has a better start time. Dennis is going well just now, just not as good as Ganna. The Aussie should benefit from going out relatively early, which will help him try to secure another pink jersey.

Michael Matthews – this TT should suit him well. The long downhill section means he should be able to get close to the specialists, but the flat run for home is where he could lose a little time. Matthews is another rider who seems to have great legs just now.

Victor Campenaerts – as I’ve said many times, he just doesn’t win enough, but that could change in this stage. The Belgian is one of the wise riders who have decided to take an early start time. It looks like he’ll have the best of the conditions, which will give him a big advantage over some of his rivals. If that wind plays ball, he’ll post a very fast time.

Thomas De Gendt – usually goes well in grand tour TTs, and will hope for Tour Legs. The Tour de France didn’t go the way he’d hoped, but he could feel the benefit in his legs.

Geraint Thomas – recent TT performances have been very good, this is a chance for him to take some early seconds in the GC battle. Winning will be hard, but he should be challenging for the podium.

Alex Dowsett – he’s the first rider off the ramp, which is a very wise move. The Englishman is a very consistent performer in TTs, if he gets an advantage due to the wind, he’ll be a hard man to beat.

It all depends on the wind. It is very strong at the start of the stage, but it is a cross/tailwind. As the strength decreases it moves round to a full tailwind. Judging the exact time of this is obviously very difficult! For me, Ganna doesn’t seem to be going out at the right time, but a certain Belgian does. I’ll take a win for Victor Campenaerts.