Get ready for some fireworks. 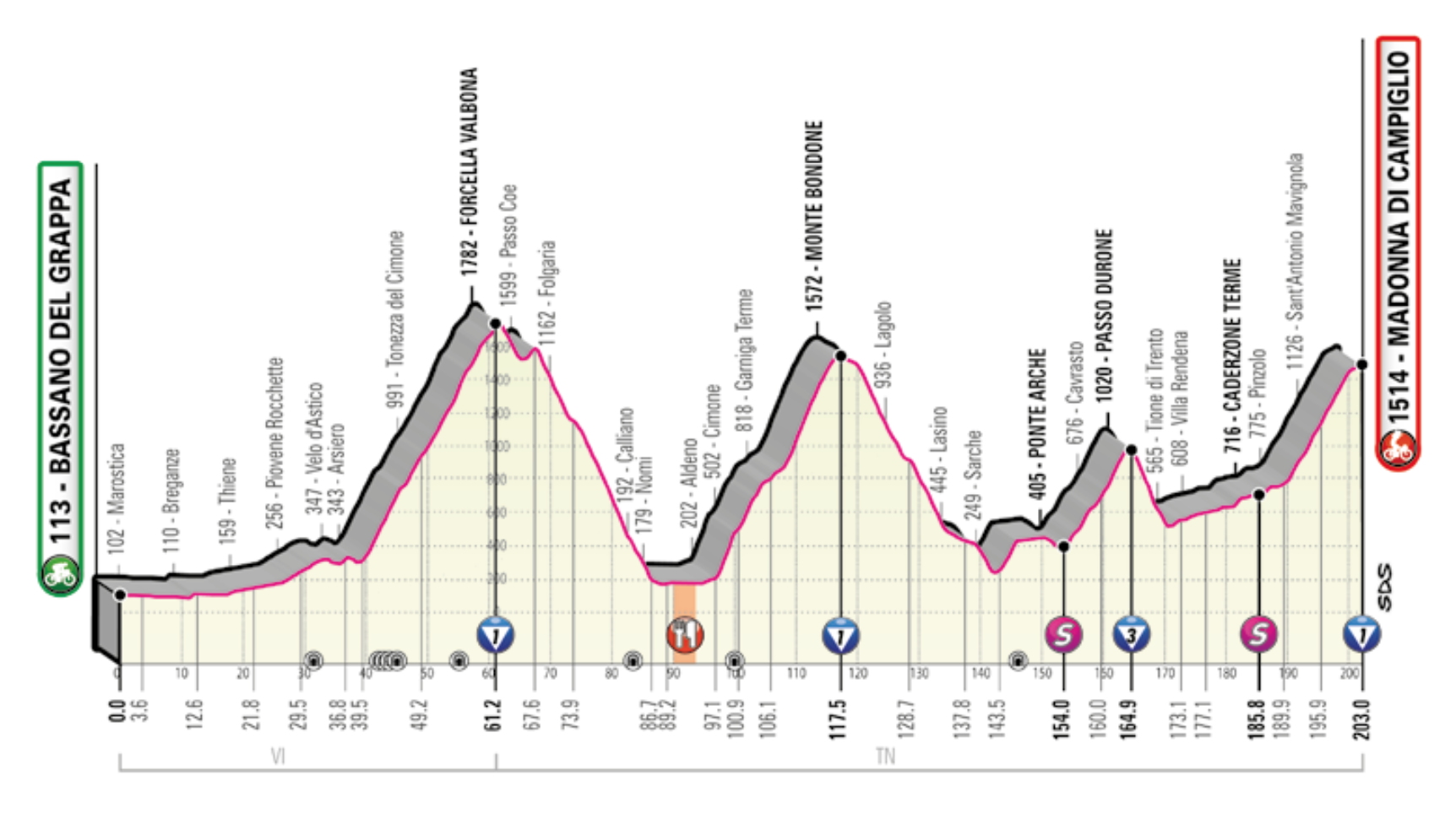 The Giro has three mountain stages left, in reality, we’ve only had two in the race so far. This is a day spent high up in the mountains, with three difficult climbs to challenge the riders.

First up is Forcella Valbona, which is 21.8km at 6.4%. It starts after 40km of racing, we’ll have to see if the breakaway has already formed before we hit the hill. A tricky looking descent follows, which could allow some riders the chance of showing off their skills.

Monte Bondone is up next, it’s 19.2km at 6.9%, but that includes almost 2km of flat. This is the hardest climb of the day, with many sections over 10%. The crest comes with 85km to go, it’s far too far out for any attacks.

Madonna di Campiglio is the final climb of the day, and the easiest. It is 10.2km at 6.4%, and it doesn’t have any hidden steep sections, it’s a consistent effort all the way up. The climbing stops with around 1km to go, the rest is almost flat, and it includes a short section in a tunnel.

Beautiful sunshine, what was everyone worried about? With a relatively strong wind from the south, it’s tailwind all day long. Party time!

We have a flat start, which isn’t great news for the climbers, but at this stage of a grand tour funny things can happen. The hardest of the climbing is over with a long way to go in the stage, which would normally put the GC riders off attacking. This means the break should be able to build a big advantage before the fireworks start behind. As the final climb isn’t the hardest, it also swings the advantage over to the breakaway riders. To me, it looks like a great day for the break, yet again!

The positioning of the climbs disappoints me. The hardest climbs come early in the day, so it is highly unlikely we’ll see any action on those slopes. There is a long grind of around 20km up to the final climb, if you move early you need riders up the road to help in this section. I just don’t see it happening.

Instead, I think the pace will be steady on these climbs, before teams start to lift it on the final climb, but is it hard enough to see gaps? Almeida will be confident of staying with Kelderman, especially as Knox and Masnada should also be around until the very end. What we could well see is some riders lower down in the top 10 making a move, QuickStep don’t need to worry about them. The relatively easy final climb means we could see some tactical racing, with riders looking to protect their own spot on GC.

João Almeida – his finish today was a reminder that he’s not finished yet. QuickStep will be confident that Almeida will be able to follow the wheels in this stage and not lose any time to Kelderman, he could even gain some seconds. We’ve all seen he has a very fast sprint, it’s up to Sunweb to make the stage very hard in the hope of putting him into difficulty. If the stage is easy, Almeida will be very good on the final climb.

Wilco Kelderman – can he eventually take a stage win? I’ll remind you of the stat I used a few days ago, if you remove TTs Kelderman has never won a stage in his whole professional career. Saying that, he was mighty strong on Sunday. Sunweb have the power to make this a hard stage, they really need to if they want to get Kelderman into pink. There is no point hanging back and waiting for the final climb, it just isn’t hard enough.

Tao Geoghegan Hart – the longer the race goes on, the better he looks. He sits just one second off the podium, and as Hindley will have to ride for Kelderman, he will hope to make his move in this stage. Winning a second stage would be an amazing achievement, he certainly has the legs to do so.

Patrick Konrad – has a very fast finish, but can he hang with the top riders?

Jakob Fuglsang – I’m using the Dane as an example, but the same goes for Nibali, Pozzovivo and Majka. As they sit quite far down on GC, there is a chance of them getting away on the final climb. Almeida won’t be overly concerned, it will be up to others to chase, which isn’t guaranteed. If the break gets caught, there is a good chance of this move taking the day.

I think this is another day for the breakaway, the tough climbs are just far too far from home. Despite the stage having some descending, the majority of it comes early in the stage, so I’ll take a win for Ilnur Zakarin. Back in the GC group, I don’t see any big gaps between the main riders.