The big day is here. 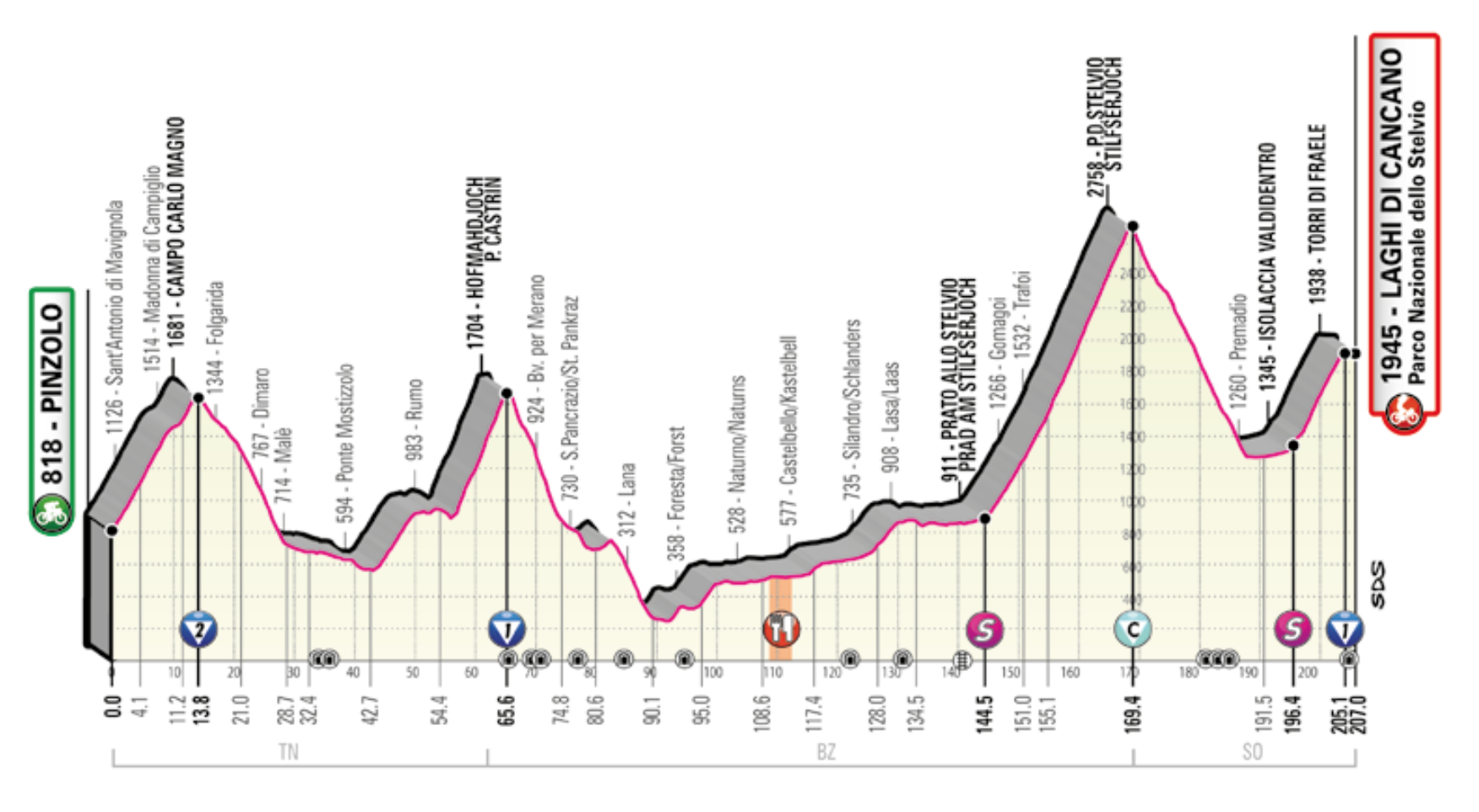 This is a huge day in the battle for the pink jersey, whoever ends the stage wearing it will likely take it to Milan.

The next climb is a very difficult 8.6km at 9.3%. It would be great to see some action here, but in reality it’s too far from the Stelvio.

The Stelvio, one of the mythical cycling climbs. It goes all the way up to 2758m above sea level, which will put some riders into a huge amount of difficulty. It is 24.7km at 7.5%, it’s long and demanding. The crest comes with 37km to go, but it will be attacked and raced like the last climb of the whole Giro.

The final climb is 8.8km at 6.4%, which doesn’t sound that hard, but it will be due to the fatigue in the legs after the Stelvio. What about all those hairpins? The final kilometre of the stage is flat.

The Stelvio is clear of snow, thank the Lord! It will be very cold up the top of the mountains.

Surely not another day for the break? You would normally expect a stage like this to go to the GC group, but that isn’t a guarantee considering the way this Giro has been raced. Sunweb are the only team interested in chasing the break, but I don’t see them taking to the front of the bunch until the approach to the Stelvio. By that point, will the break already have enough of a gap? The opening climb means we’ll get a strong group of climbers escaping the peloton, as long as it doesn’t contain a GC threat I think they’ll be allowed to build up a nice advantage. Their success will ultimately be decided by Team Sunweb, and maybe Ineos.

I don’t see anything happening until the Stelvio, then Sunweb will start to smash the bunch to pieces. Their goal will be seriously reducing the peloton and get to a point where they have Hindley and Kelderman, but QuickStep only have Almeida. The issue for Sunweb is that Almeida doesn’t need to follow Hindley, he’s almost three minutes down, but Geoghegan Hart does need to chase him. If I’m Almeida, I would focus on Kelderman and not cover any other move. This might be a risky strategy, but if he wastes energy chasing Hindley, he’ll be punished by Kelderman. Hoping to sit back and take advantage will be Geoghegan Hart, who looks incredibly strong just now.

We also have the chance of riders like Nibali, Fuglsang and Pozzovivo attacking on the Stelvio. As they aren’t really a threat to the pink jersey, a long-range attack could well succeed in this type of stage. I’ll happily sit back and watch how the race unfolds.

Wilco Kelderman – will he eventually be able to win a stage? He’s just 17 seconds behind Almeida, and he knows that if he cracks him during this stage the pink jersey will be his. Technically, I don’t think he needs to win the stage, that would be the icing on the cake. Kelderman continues to impress, he’s ridden a brilliant race so far.

Jay Hindley – given how close Kelderman is to pink, they’ll be fully committed to him. Hindley has looked good in the mountains, but this stage is all about putting Wilco into pink, not chasing personal glory.

Tao Geoghegan Hart – it would take something incredible for him to be propelled into the fight for pink, I just don’t see it happening. Instead, this a brilliant chance for Tao to take his second stage win. The Londoner has looked at ease in the mountains, he seems the best climber in the race. As long as he keeps his head when the attacks come, he should be able to take another win.

Vincenzo Nibali – please attack on the Stelvio. That is all.

I think this is a day for the GC men to fight out the stage win, but it will be up to Sunweb to chase down the break. I see another stage win for Tao Geoghegan Hart, and Wilco Kelderman will move into the pink jersey.