Stage 3 and we’re already off to the mountains. 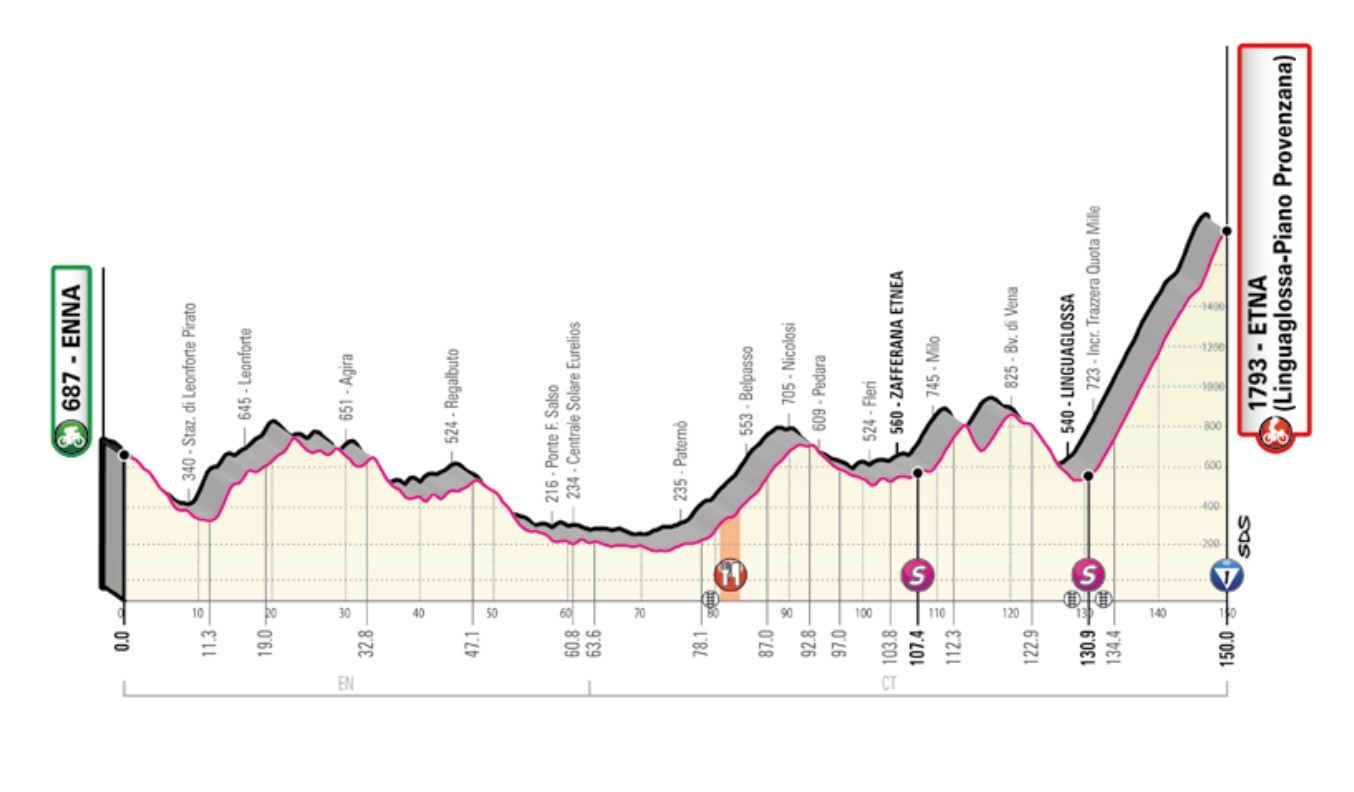 The stage is a little on the lumpy side, but all the action will be saved for the big finish. This is not the side we climbed Etna back in 2017 when Jan Polanc won, it’s the harder side.

Mount Etna is a long and challenging climb. It can be classified in many ways; I’ll go with 15.2km at 7.2%. There aren’t many easy sections, and crucially the hardest ramps come in the final 3km. This should allow some of the GC riders to come out to play and test some legs.

Cloudy, with a threat of rain throughout the day. The wind is coming from the north, which means the final climb will mainly be a tailwind, but it isn’t very strong.

Ineos are in control of the pink jersey, but everyone knows that Ganna won’t survive the climb. They have Geraint Thomas who is the favourite to move into pink after this stage, but he is one second behind Almeida, who cannot be underestimated.

I do need to point out that the Ineos squad isn’t like the usual team they would take to the Tour de France. In terms of support deep into the stage, they only really have Geoghegan Hart and Castroviejo, they don’t have the riders to dominate the mountain stages. If it won’t be Ineos dominating the stage, who will it be?

It would have been Astana, but they’ve already lost López and Vlasov. Without super strong teams, it will be interesting to see how takes control of the climb.

If the big riders look at each other, there is a chance of a surprise winner. This would be a rider the big names don’t think would be a genuine GC contender, but someone good enough to hang tough late in the stage.

Do Ineos want to defend the jersey? As most riders are still close on GC, the break will only win if Ineos let it. I think this is unlikely to happen.

Simon Yates – he’ll start the stage as the favourite, mainly due to his win in Tirreno. The Brit is currently in very good form, but he needs to use every mountaintop finish to try and gain time on Thomas, due to the amount of TT kilometres in the race. All eyes will be on him, but when he attacks not many can actually follow. Mitchelton-Scott have a strong team to support him, with the likes of Hamilton and Haig likely to be around until near the end of the stage.

Geraint Thomas – after a strong TT, he already has his rivals looking up at him. There are real signs that the Welshman is back to his very best, and I don’t need to remind you about how good he can be. This type of mountain is good for him, he can settle into a rhythm and not have to respond to many sudden accelerations. If it ends in a sprint between the GC men, he has a good kick.

Jakob Fuglsang – does anyone know why he started the TT at the end? That was a shocking decision by Astana, and he already lies 1:24 down to Thomas. That would be hugely frustrating for him, but it does offer the chance of some freedom deep into the stage. If the climb is hard, and the domestiques are all gone, there will be a big chance for Fuglsang to attack and get away. Hopefully he wasn’t sitting beside Vlasov on the team bus!

Vincenzo Nibali – form is still hard to judge; he was quite far off his best in Tirreno. Now we’re racing in his homeland you can bet he’ll be super motivated to do his best. Nibali is a master of timing his peak to perfection, I wonder if he’s done it again.

Tobias Foss – the winner of the 2019 Tour de l’Avenir is one of the talents of the future. He is an exceptional climber, but also very strong on his TT bike. After posting a very good time on Saturday, he’s in a great spot on GC. With all eyes on Kruijswijk, he could benefit from flying under the radar.

Jack Haig – if the big names mark each other, there is a chance Haig could sneak away. The Aussie is a great climber, he should be there in the closing stages, but we’ll have to see if he can ride for his own chances.

Given how far he’s down on GC, I think we’ll see Jakob Fuglsang take the win, with Geraint Thomas moving into the pink jersey.