A day in the Apennines. 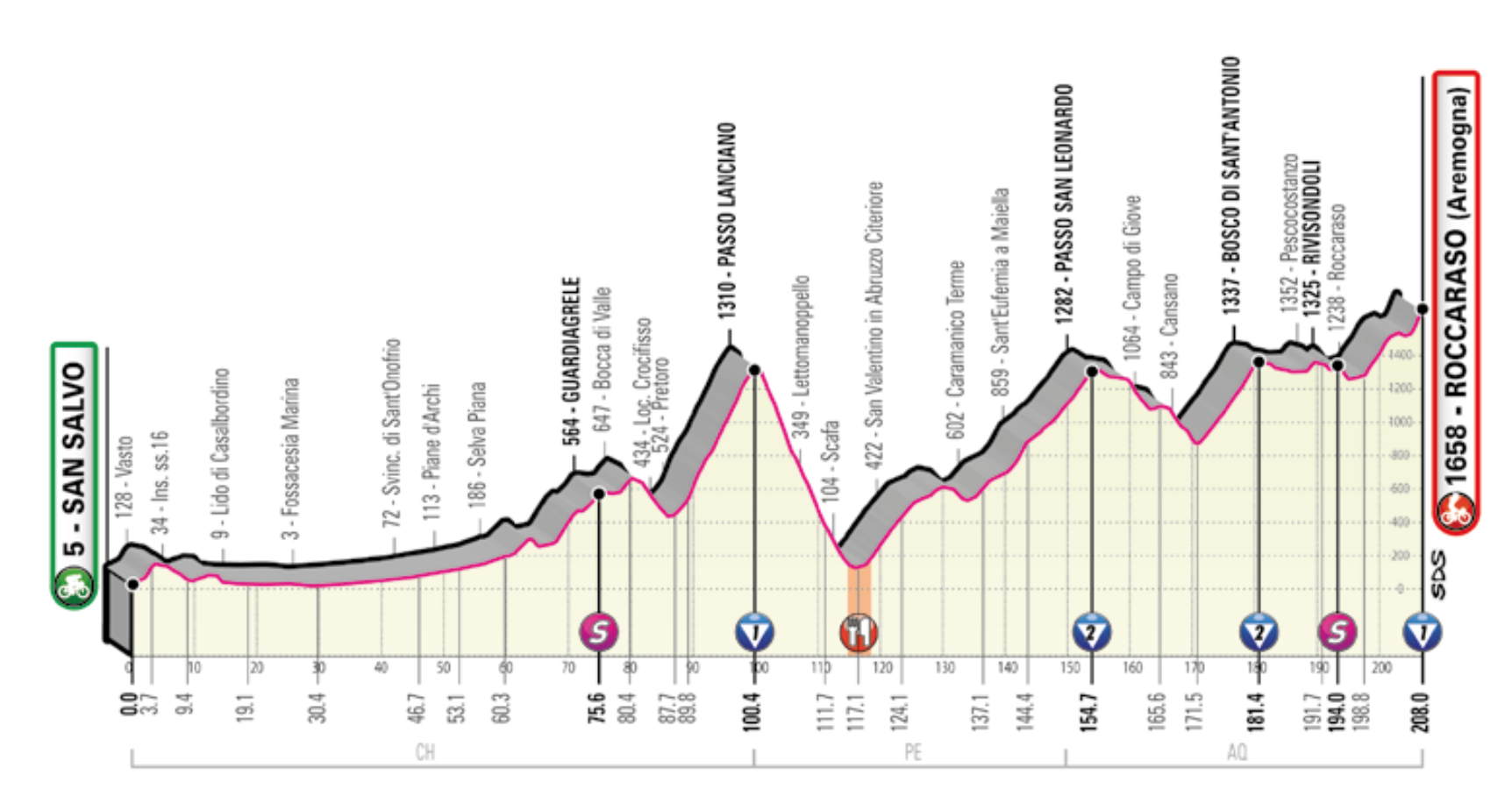 With over 4000m of climbing, this is a tough day in the saddle. The opening 60km is flat, the rest is not. The break will likely form before the climbing begins, which makes it complicated for climbers looking to make the move.

The first climb of the day is the cat 1 ascent, Passo Lanciano, which is 12km at 6.8%. This is the hardest climb of the day, but it’s far too far out to have any impact. The rest of the climbs are relatively straightforward for the guys in the bunch.

This is where it gets hard. The final 1.2km rises at 9.4%, this will seriously test the legs of the GC riders.

There is high chance of storms, which will make this a brutal day. There is a strong wind coming from the south-west, which means cross/headwind for the majority of the day, including the final climb.

It depends on the climbing ability of the break. With so much altitude gain throughout the stage, they’ll need riders who can power on during the climbs. Getting guys like this in the break will be tough due to the flat start. Their hopes will obviously depend on the attitude of the peloton, who wants to chase all day? Astana don’t have the numbers, the responsibility will have to be on the shoulders of QuickStep, Trek and Sunweb.

Given the lack of a dominant team, every mountain stage could be unstructured and chaotic. A team like Bora, who have Konrad and Majka high on GC will try and use this to their advantage. Towards the end of the stage, I’m not sure how many domestiques will be left to chase attacks, the standard of climbing domestiques isn’t very high at this race, but the climbs in this stage aren’t overly difficult, we should have a few riders still around to chase moves down and set up the GC riders for the final kilometre.

Jakob Fuglsang – the finish is brilliant for him; he is now one of the best in the world on steep slopes. I’m sure you all remember him climbing Roche-aux-Faucons in last year’s LBL, he will be very hard to stop if the GC riders are all together in the final kilometre. It is a real shame that López and Vlasov are no longer at the race, it does make things much harder for the Dane. If they take him to the line, he’ll be one of the favourites.

Vincenzo Nibali – he seems in good form, but winning this stage will be complicated. He is good on steep slopes, but lacks the kick required to sprint for the win.

João Almeida – talking about a kick, Almeida certainly has it. He’s enjoyed a wonderful opening week; it must still feel like a dream for him. The final kilometre will really test him, but if he manages to hold on, he has the sprint required to win the stage. Remember, Almeida is bloody quick.

Wilco Kelderman – another of the GC riders who’ll like the look of the finish. Given his TT ability, he’s currently sitting in a very strong position, he must be a concern for Nibali and Fuglsang. After taking some time on the Etna stage, Kelderman doesn’t have to do anything daft, just follow the wheels and try to win the sprint. He’s fast, and will back himself to take the stage.

Pello Bilbao – another who’ll like the look of this finish. The Basque rider is quality, Bahrain will be confident he can take another grand tour win.

Diego Ulissi – given that the hardest climb is a long way from home, there is a chance that Ulissi survives in the bunch, but he also might try for the break. If he does stay in the GC group, he’d be the big favourite for this type of finish. It really does depend on how the race goes, and how hard the GC teams want to make the stage.

Bora – Bora are in a strong position, with both Majka and Konrad sitting in the top 10. Of the two riders, Konrad has the faster sprint, which means Majka should be the one to attack in the final kilometre. Konrad was dropped on Mount Etna, but as this finish isn’t as difficult, he should be able to hang on for the sprint. He won the sprint from the bunch on Tuesday, he’s another who’ll be happy if we get a GC sprint.

Given the wind direction, this shouldn’t be a day for the break. As the final climb is going to be a cross/headwind, it should be a sprint finish between the climbers. I’ll take a win for Diego Ulissi.