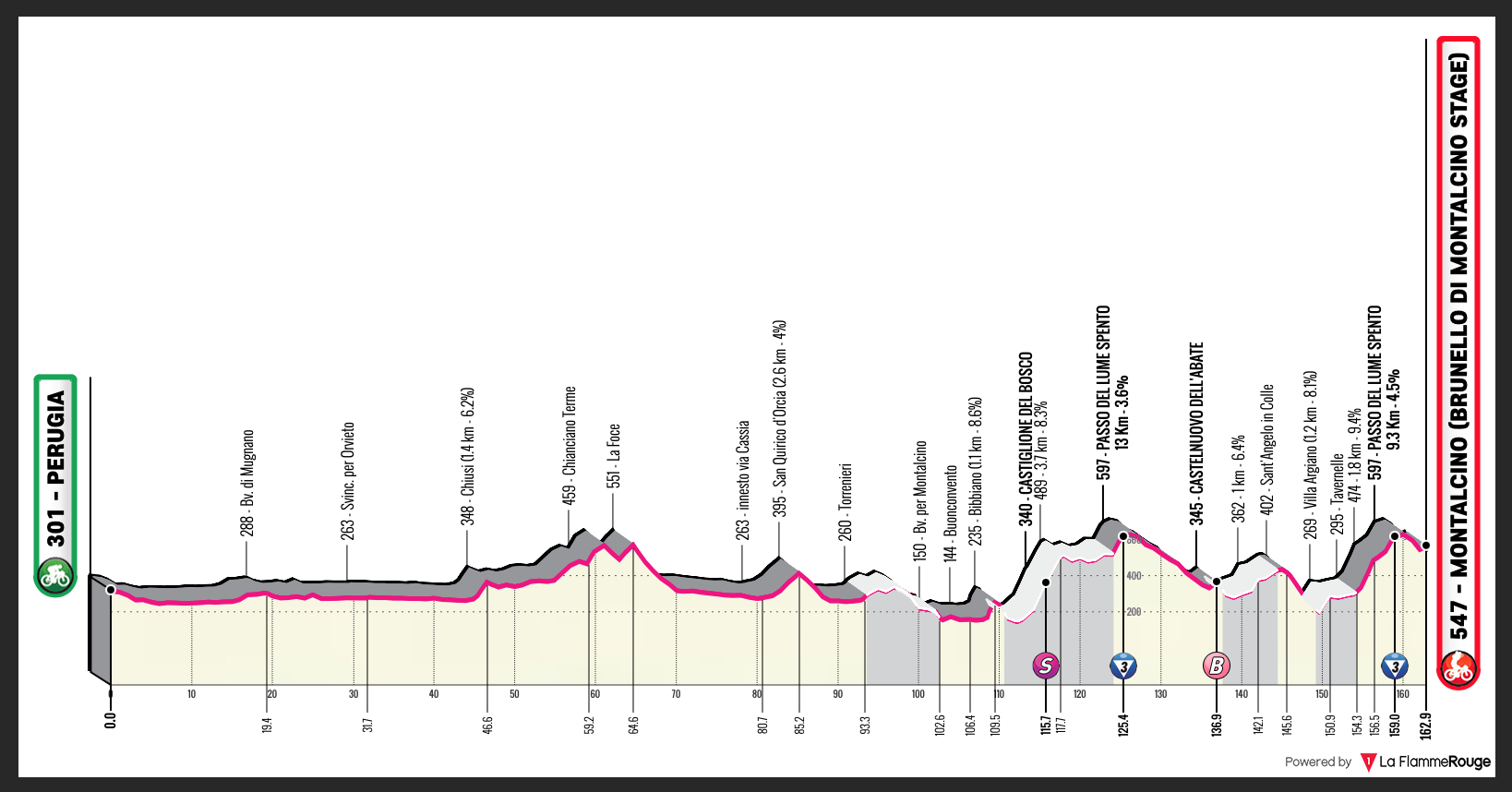 This is all about how the GC contenders cope with the white roads, they must tackle four sectors:

The first of the sectors is mainly downhill, but that can be as hard as going uphill.

The second sector is the longest and features an uphill section. 4.1km at 7.6% is a tough climb, throw in the gravel roads and this will be one of the key points in the stage. The good news for those that get dropped is there’s still 45km to go from the crest.

The third sector is another uphill section, but not that steep.

The final sector features a short climb, before merging onto the main road for the final ascent to the line.

The rise to the line takes place on a nice road, but it does feature some steep sections. The hardest bit is 1.7km at 9%, but is that long enough to see gaps between the main climbers?

The finish is in the town of Montalcino, the final kilometre is narrow, not much room for moving up. The final turn comes with 200m to go, then it’s 10% up to the line. This is a great looking finish.

Cloudy and warm, the wind won’t be an issue either. There are some showers in the area, but it looks like they’ll miss the race.

Technically speaking, 2460m of climbing isn’t that much. The stage features one climb that is tough, but it’s 50km from home. Obviously, the gravel roads will make the bunch very nervous, and the pace will be high for most of the day, but is the stage hard enough to see big gaps on GC? Sorry to disappoint, but I just don’t see it. I hope to be proven wrong, but even with the white roads, I don’t think the stage is that hard.

Ineos are the team who’ll want to make the race tough, Bernal is clearly in good form and did very well in Strade Bianche earlier in the season. He will sense a chance to try and put some more time into his big rivals before we head into the high mountains. The race is missing Strade Bianche specialists, which adds a little intrigue to the stage. Then you need to remember that those who have a GC rider in their team will likely be asked to sacrifice personal ambition for the greater good, but which type of rider can win the stage? With just one big climb you’d expect the puncheurs to still be in the mix come the finish. The breakaway riders will also sense a chance to upset the odds and take the win. This stage has a bit of everything, it’s a real shame it’s not taking place at the weekend.

One more thing. It’s the day after the rest day, which means they’ll be the usual worries for riders as some can react negatively to a day off the bike.

Tactically the race should follow a familiar pattern, like that in a mountain stage of a grand tour. When we are around 20km from the first sector Ineos will hit the front and put the pace on. They’ll maintain this on the gravel roads and try to put as many GC riders into difficulty as possible. I don’t see big attacks on the main climb, it’s too far from home. Instead, I think we’ll see Bernal wait until the final 8km before attacking, we’ll then see who can follow. Hopefully all the main contenders avoid crashes and punctures.

I hope you all noticed The Teacher’s Pet riding Bernal off his wheel in the intermediate sprint on Monday. Remco, you are living in his head! This is another day to chalk off, it’s all about getting through without losing time. Serminator, TGV and Der Kaiser you have an important job in the early stages. Then you hand over to The Prof, Stilknox and The Eel, monitor the late moves, don’t let Ineos get a man up the road. Smokin Jo, you stay with Remco all the way. I want us to have the best position for the final corner, then The Teacher’s Pet can hit the turbo button. Go wolves!

Egan Bernal – after his stunning performance on Sunday, I can see why he’ll start this stage as the favourite. He showed in Strade Bianche that he copes well with gravel roads, much of this is to do with his mountain bike background. The steep rise in the final 10km is also good news for him, as is the kick up to the line. With the likes of Moscon to make the race hard, he’ll want to test his legs and see if he can gain more time on Evenepoel. This won’t be easy to do, but he’ll still try.

Remco Evenepoel – he won’t be delighted to have lost time on Sunday, but he’s still right in contention. This is the last of the stages that he needs to survive before he reaches the stages that suit him better. Given the nature of this stage, I don’t expect the Belgian to be dropped, he’ll cope just fine with the white roads. I was impressed by the way he rode Bernal off his wheel in Monday’s intermediate sprint, that was an impressive turn of speed. He won’t start as the favourite, but it wouldn’t surprise me to see him win.

Giulio Ciccone – he’s still right in the mix for the pink jersey, but how long can he keep it going? The punchy climbs in this stage should be good for him, he’ll be desperate for the win to go with his good legs.

Pello Bilbao – the type of rider who could surprise with a late attack.

Peter Sagan – the final 10km isn’t ideal for him, but I don’t see him waiting until then. Sagan has never won Strade Bianche, but he has gone close. He knows that the GC riders will fly up the main climb, I think he might try and get up the road before then. After taking an impressive win on Monday, he can approach this stage with freedom, which makes him even more dangerous than usual.

Gianni Vermeersch – breakaway hopeful number 1. The “I once did okay in Strade Bianche” pick.

Diego Ulissi – breakaway hopeful number 3. The “I always win in the Giro” pick.

Gianluca Brambilla – breakaway hopeful number 4. The “I once did well in a stage like this” pick. He won a stage in the 2016 Giro that featured a gravel climb, taking the pink jersey in the process.

I’m having difficulty seeing this straight. Wasting energy chasing the break is dangerous for Ineos as the only have seven riders in the team, and they seem keen on protecting two of them. Will another team help them chase? Not a hope in hell. I think this hands the break a massive advantage, but which type of rider will make the move?

The opening 45km of the stage is flat, you’ll need a big engine to make the move. You also need to remember that some high-profile breakaway riders will have to support their GC rider. This means I’ll take a win for Diego Ulissi. Yes, he does have Davide Formolo in his team, but UAE don’t seem to mind him being isolated and Ulissi seems to be growing in form.

Back in the GC group, I think it will be hard to split the main GC contenders, unless some riders are unlucky and suffer a mechanical.