Do not underestimate this stage. 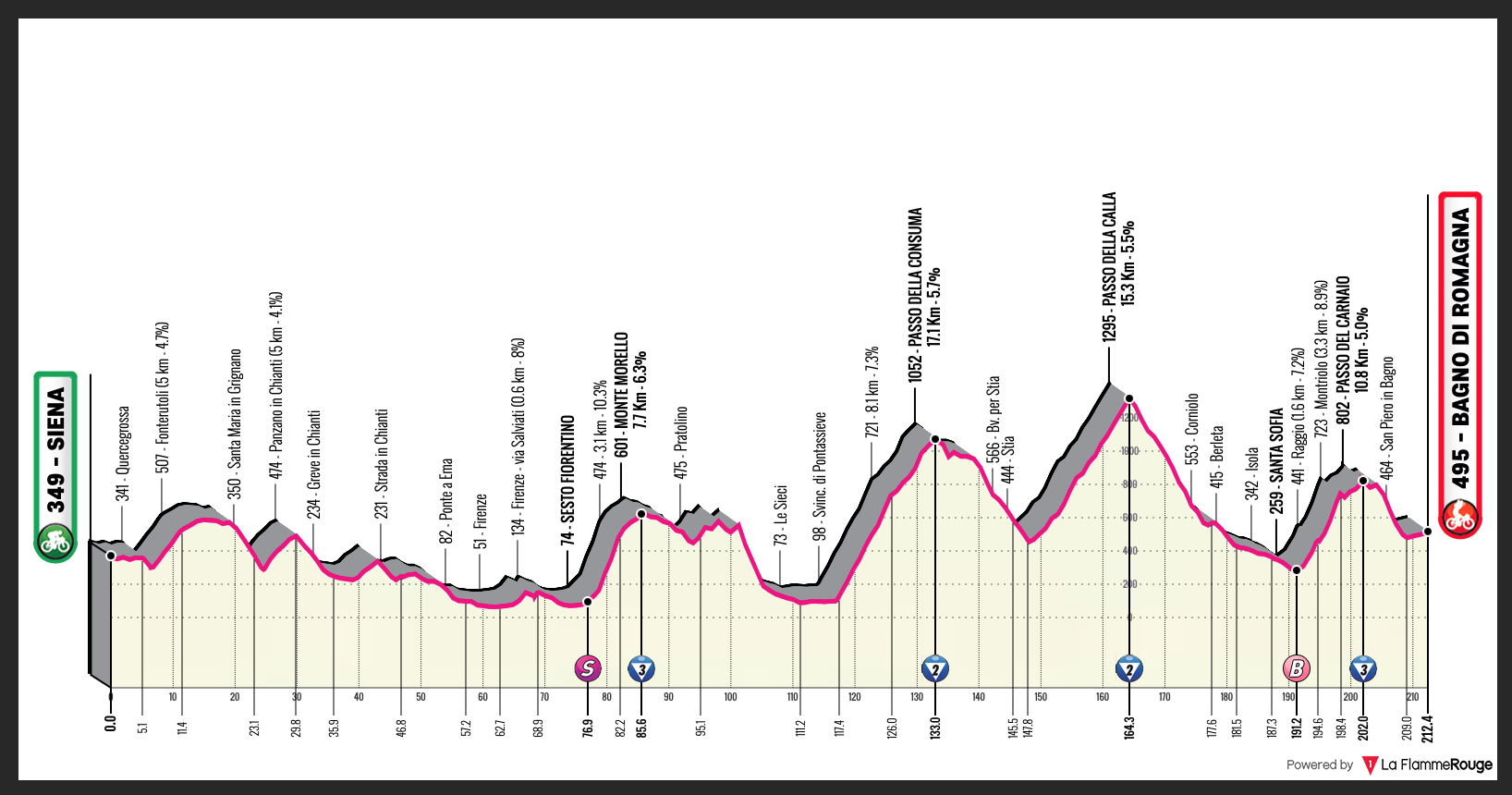 We might only have two cat 2s and two cat 3s, but this stage has 4455m of climbing, making it the second hardest stage in the whole race. Quite incredible considering the profile doesn’t look that bad.

The descent is narrow and tricky.

The final climb of the day is a cat 3, 7.3km at 5.9%, but the final kilometre averages over 10%. Once this is over, the road continues to rise for another 4km or so, which is rather nasty. This is where the winning move is likely to come.

A wonderful stage for the breakaway. After the stress of the white roads, most teams will be happy to see the morning move disappear up the road, meaning a relatively easy day for the GC contenders. The stage does contain a lot of climbing, but the big climbs come too far out for the GC riders to test each other. We will see some attacks on the final climb, and a rider further down the top 10 could take back some time, but not much.

The opening kilometres of the stage are rolling, which is good news for those looking to join the break, as long as they have good legs. No doubt we’ll see a crazy start and it could take a long time for the right move to form.

What the fuck was that? No jokes boys, we looked a shambles out there. Smokin Jo, you’re in the bad books. Get outside and clean the bikes, I don’t want to see your face for a while. Teacher’s Pet, I told you not to visit McDonalds on the rest day, but you know best.

Now, you managed to limit the losses and we’re still in the race, but it’s going to be complicated. I want us to ride a slightly different race, The Eel and Stilknox, you boys have freedom to try and jump in the move. This is a nailed-on day for the break, but I still want us riding high up in the bunch, we show no weakness when Ineos turn round. Now on you go and tell Smokin Jo to come back in. Me and him are going to have a few words…

Felix Großschartner – the “I’ve done nothing in this race” pick.

Koen Bouwman – the “I nearly won on Sunday” pick.

Bauke Mollema – the “I’m only here for stages” pick.

You might have guessed that I fancy the winner to come from the break. This is a very dangerous pick, given the way he approaches trying to get in the break, but I’ll go with Ruben “Headless Chicken” Guerreiro.

Back in the GC group, we’ll see some riders a little further down on GC trying to jump away on the last climb, but Ineos will be in a mood to control.