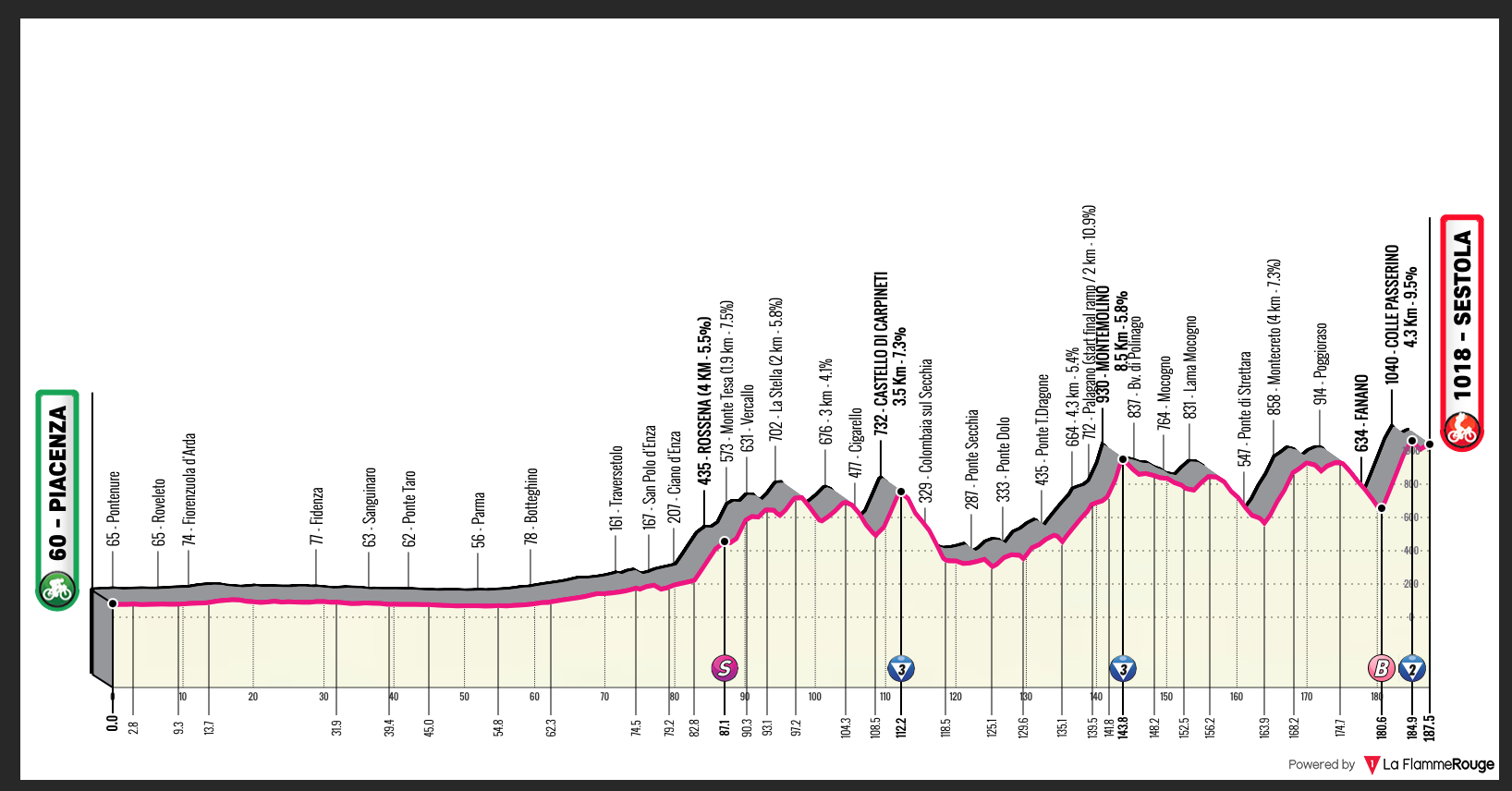 The forecast looks awful. We’re talking about a large amount of rain during the stage, with quite a strong headwind for most of the stage. If the forecast is correct, we’re in for an epic stage.

Beware the descents. If we get a lot of rain, you can bet that Astana and Movistar will be silly and attack on slippy descents. This one comes with 75km to go and looks the worst of the day.

The final climb of the day is 4.3km at 9.6%, that’s harder than the Civiglo. It’s also inconsistent, it looks tough to me.

The climb crests with 2.5km to go, and you can see it’s not all downhill. It’s a tricky finish to what should be a demanding day.

I was going to write this was the first chance of a successful break, but Taco van der Hoorn thought different. Today’s stage means we have several riders down on GC, which opens the door for a successful break. Also, there is no way Pippo Ganna survives with the front group, he won’t be in pink after this stage. Sitting in 2ndplace is Tobias Foss, but will Jumbo-Visma ride for him considering the difficulty of the climb? Next on GC is Deceuninck – Quick Step, will they take up the mantle and keep the break in check?

Normally when we have a number of questions surrounding who will work, it’s a good day for the break. The rain could also be good news for them, but that depends on the attitude of the bunch. This looks like a good day for the attackers, we could even see one of them move into the pink jersey, like Valerio Conti back in 2019. The key is to be a good rider, but not good enough to be perceived as a real GC threat.

One issue is the opening kilometres of the race, it takes place on a normal two-lane road, with a big headwind. Skinny little climbers will find it hard to make the move, you’ll need some power to get in the break.

Most of the big teams will be keen on sitting back and enduring the rain. They’ll hope to stay safe and arrive at the foot of the climb with as many riders as possible. Once on the climb the big boys will come out to play, it really is a very tough climb. Who wants to go deep this early in the race? We wouldn’t normally see massive gaps in this type of stage, but if it really does rain as predicted, the gaps could be surprising.

A few of the GC teams have multiple options to play, this gives them a tactical advantage. Teams will look to attack and force others into chasing, before launching another move when it comes back together. Hopefully the fact we’re only in stage 4 doesn’t mean everyone rides conservatively.

Right boys, this is the first of our stages. Der Kaiser and The Serminator, you need to be watchful in the opening kilometres, no GC threats in the break. The Prof, I also want you monitoring the moves, if a big move looks like it’s going to go, I want us in it. I’ll be a happy man if The Prof, The TGV or Stilknox get in a big break. If it’s a shitty break, don’t even bother trying, we sit back and let Ineos control.

The forecast says we’re going to get a lot of rain, lucky for us The Teacher’s Pet and Smokin Jo come from Belgium and Portugal. Everyone make sure these boys stay dry, and we’ll have plenty of tea in the car.

Once we hit the final climb, we come out to play. The last 2km of the climb is a tailwind, don’t attack until them. Teacher’s Pet, you get to do your thing. Smash it, the way only you can. Smokin Jo, you wait and see if anyone wants to follow, they can tow you across, you’ll win the sprint. This is the first of the big days, do your thing Wolfpack.

Deceuninck – Quick Step – they have two brilliant options for this stage in Evenepoel and Almeida, both of whom should enjoy this type of climb. This is a chance for either of them to take the pink jersey, but I don’t expect them to chase in the bunch, it’s not their responsibility. If it does come back together, Remco should be used to attack, allowing João to wait for the sprint. Having two strong options puts the team into a wonderful position, this is a good stage for the boys in blue.

Egan Bernal – now we’ll see if he has a sore back. I think he’ll be challenging with the best, Ineos wouldn’t have brought him otherwise. Bernal will love this climb; it suits his characteristics. Will we see him attack or simply look to follow wheels, saving energy for later in the race?

Simon Yates – arrives with the best form of all the GC riders. He has the punch required to cope with this type of climb, but I wouldn’t say it was his speciality. Will he really use up a match here considering his previous of blowing in the final week? It certainly is a risk.

Hugh Carthy – loves steep climbs and loves the rain, this is looking good for Hugh. He would prefer if the finishing line was at the top of the climb as his sprint isn’t as fast as his main rivals. This makes it harder for him to win, but certainly not impossible. If anyone is going to attack early on the final climb, it’s him.

Davide Formolo – I wouldn’t say he’s one of the big favourites, but he could surprise.

Bauke Mollema – exactly the type of rider who can slip off the front if things get tactical. Mollema is surprisingly good on these types of climbs, just think back to San Sebastian and Il Lombardia.

Gianni Moscon – breakaway hopeful number 1. Just in case Ineos want to race like they promised at the start of the year.

I’m torn and finding it hard to work this one out. It could be one for the breakaway, but the headwind could well put a lot of riders off. That headwind also means the break will have to be big to survive, but who will chase from behind? Okay, time to have a good think…

The headwind means the break won’t win; this will be a GC day. Coming so early in the race I think despite the difficulty of the climb it’ll be hard to split the top 10 riders. I think we’ll see someone with a teammate get off the front in the closing kilometres and take the win. I’ll go for João Almeida. That’ll be his first pro win and the pink jersey.