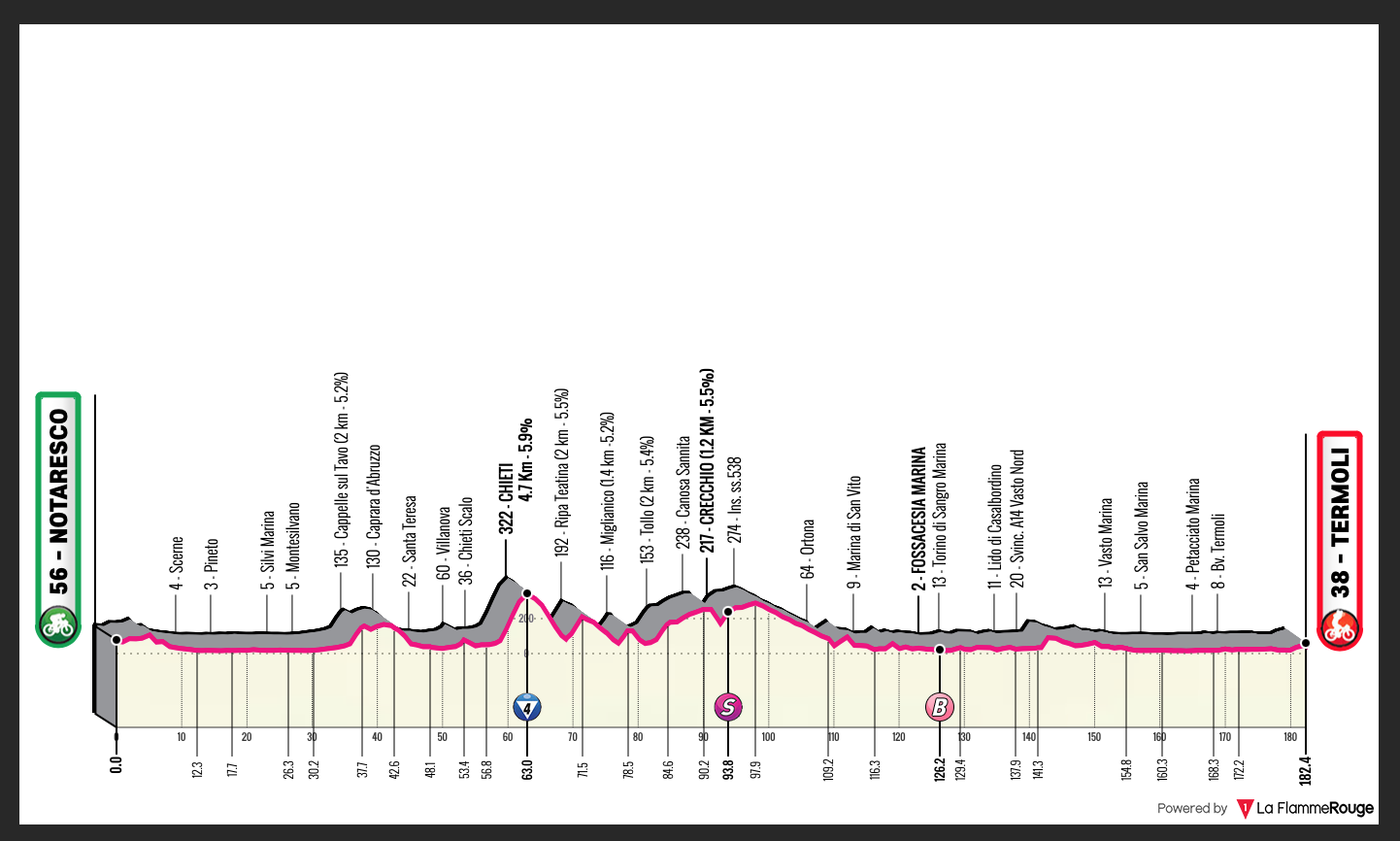 Boring stage until we get to the finale.

Sunny, warm and a big headwind all day, but a tailwind for the sprint.

The final 25km is basically a straight road which hugs the coast and is fairly wide.

10km – the riders take the road on the right, and it narrows down to a single lane for a short period of time.

4.5km – two lanes forced into one for the left-hand side of this roundabout. This is obviously an important point in the sprint battle.

3km – the roadbook says only the right-hand side is open, which seems strange to me.

1.8km – don’t need to slow down here, straight through the left-hand side.

1.65km – big right turn, you must be close to the front here. The battle for position will be fierce.

1.6km – the turn leads straight into this little ramp, which is 250m long. The opening half is at over 10%, the second is much easier. The top of the hill comes with 1.3km to go and the bunch take a fast left bend.

400m – everyone must fit into the single lane on the right. Once though we only have 300m to go.

Okay sprint teams, what should you do in a finish like this? Time for the guru to step forward…

Time for the late surge. The approach roads are nice and easy, I would hang back and make a big move at 3km to go. It is vital to be at the head of the race for the right turn that leads into the kicker. Don’t worry about the hill, it’ll be over in the blink of an eye, but with still 1.3km to go, you need two men in front of the sprinter. Therefore, I would favour the late surge; it means you can save riders for the final km. Do not forget the final km is quite technical, having someone to guide the sprinter is vital. Be warned, if the sprinter loses places on the kicker, it’s game over.

Gather round my little wolves, it’s another day to chill in the pack.

You guys were brilliant today. Serminator, maybe it’s not a good idea to pick a fight with the BikeExchange team car. Next time you want to have a go at Matt White’s hair, wait until after the stage.

This stage should be calmer than the previous sprints, there’s fewer GC riders trying to get to the front. I want us at the head of the peloton for the right turn that leads into the kicker. Der Kaiser, The Serminator and The Prof you have the responsibility to keep The Teacher’s Pet safe. TGV, if there’s a chance to attack on the little hill you have my permission. This stage is all about recovering for what lies ahead and making sure we stay safe.

Caleb Ewan – Wednesday was a very impressive win, the correct way to bounce back from his stage 2 disappointment. The finish is good for Caleb, he copes very well with little kickers, as does Jasper De Buyst. With one win already in the bank, Caleb can afford to relax and approach this finish in a calm way. I would expect his train to get it right again, they really do have the experience and power to control a finish like this. If Caleb starts his sprint from a good spot, he’ll be very hard to beat.

Giacomo Nizzolo – another 2nd place, can he eventually nail the big win. This finish is good for him, he climbs very well and would expect to be right at the front of the bunch with 1km to go. The problem is that riders like Ewan and Merlier are simply faster than him. This makes winning this stage very difficult.

Peter Sagan – like Nizzolo he’ll like the look of this stage, but he also knows that the pure sprinters are much faster than him.

Tim Merlier – he collided with Ewan in Wednesday’s sprint, which was a shame as I wasn’t to see them go head-to-head.  The Belgian came here hoping for a win, and he got that in stage 2, but he’ll want more. Alpecin-Fenix have a good lead out, they’ve surprised me in the two sprint stages. It would be good to see a sprint battle between him and Ewan.

Fernando Gaviria – it’s just not happening for him, especially as he and Molano seem to communicate like a divorced couple. I just can’t see him winning.

Elia Viviani – Cofidis have done well in both sprints, but Viviani has lacked the killer instinct to finish it off. Unlike Gaviria, I think he has a chance of turning things around.

Dylan Groenewegen – some will try to tell you that the kicker will put him into trouble, don’t listen to them, they’re talking rubbish. He has the type of train who could grab control of the race at the right time. Dylan will win a stage in this race, it’s only a matter of when.

Late Attack – the kicker will give hope to those who want to attack, but I don’t think it’s long enough to get the gap required to win.

Yes, there is a late kicker, but this will be another sprint finish. In the battle between Ewan and Merlier I’ll take a second win for Caleb Ewan. That being said, I’d love to see Nizzolo getting his win.