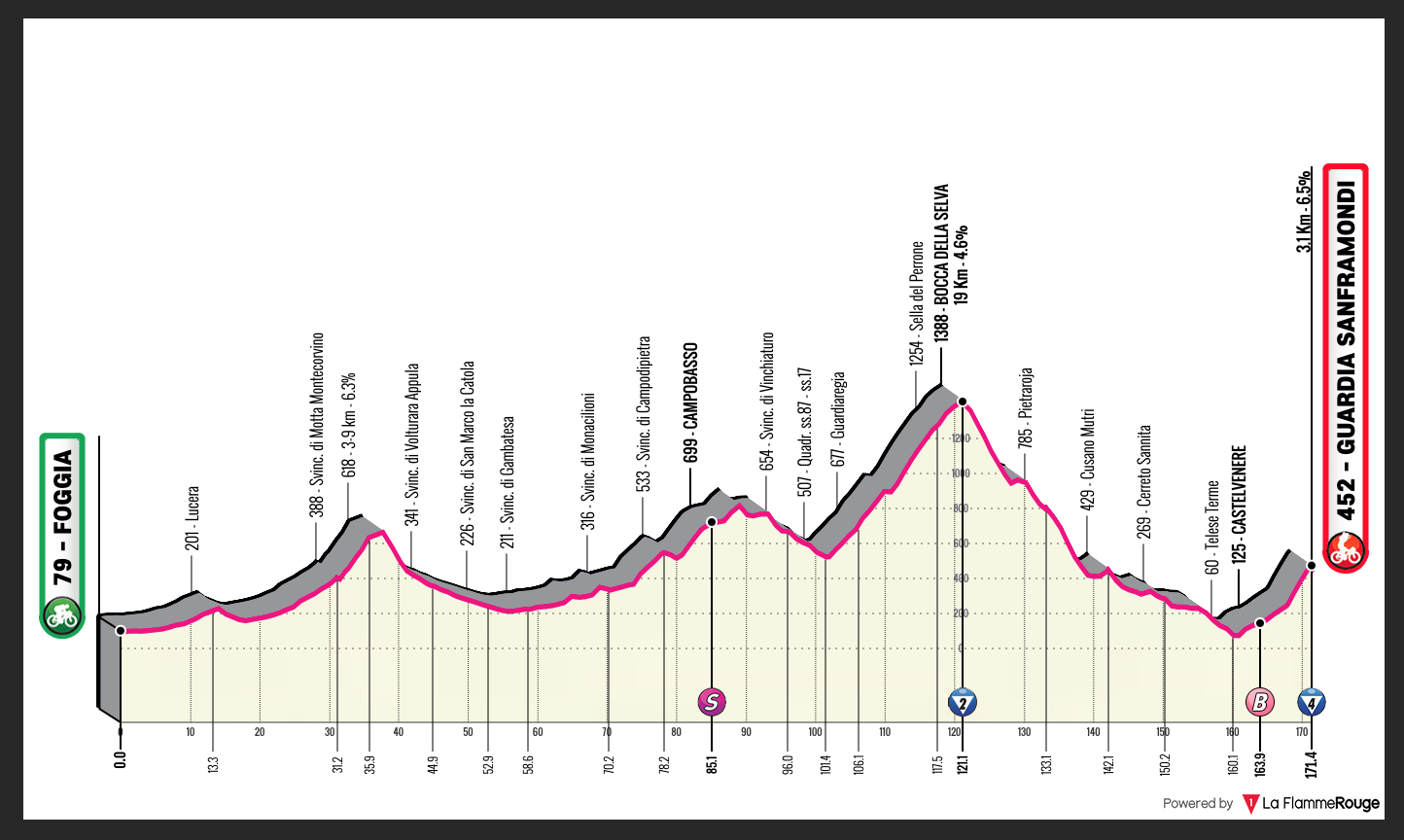 Too hard for the sprinters, not hard enough for the GC riders, this one is another good stage for the breakaway.

Lots of cloud throughout the day and it looks like there could be some rain too. It shouldn’t be anything like previous days, but we’ll have to wait and see.

19.1km at 4.4%, isn’t the hardest climb in the world, but it’s beyond the fast men. The descent is fast, but not that technical.

3.5km at 6.5%, but there are lots of sections at 8%, which makes the finish quite hard. It suits a puncheur, but it all depends on who is in the break.

Okay boys, this is a day where you domestqiues get to have some fun. The start is going to be crazy; I want us in the moves. We have The TGV, Stilknox, Der Kaiser, The Serminator, The Prof and even The Eel as potential options. You all know how we roll, rotate the attacks and see what sticks. Once the move goes, the riders who are left in the bunch will look after The Teacher’s Pet, but this is an easy stage for our little superstar. Once on the final rise to the line, I want us to make it tough for Valter, let’s see if we can crack him and put the wee man in pink.

As the stage is easy for the GC riders, it’s likely we’ll see lots of domestiques given some freedom to chase personal results. The opening of the stage is on a wide highway and into a strong cross/headwind. This means the GC teams will want to be a little careful in case we see any splits, but I doubt we’ll get echelons.

The battle for the break will be fierce, after just 25km comes a 10km climb at 3.6%. This isn’t hard, but it’s a good spot for the break to establish and never be seen again. To make the move you’ll need to be strong and have good legs. I doubt the big climb will have an impact on the race, it looks too far from home.

If a big break escapes, those teams who have multiple riders in the move will have the tactical advantage. In stages like this it isn’t always the strongest rider who wins, sometimes it’s the smartest.

As much as I would like to say the breakaway will win, we need to remember this is a grand tour and funny things can happen. If we see a big fight for the break, and somehow only a small break escapes, it could come back together as the stage is relatively easy. The finish is still going to be too hard for the sprinters, but it will interest several puncheurs. Will Bora take a big risk and try to control the stage for Sagan? The cat 2 climb looks tough, and Sagan isn’t climbing like he was a number of years ago. Then we have the finish, the opening 2.5km averages 7%, which would be hard even for a rider like Sagan. Everything is pointing towards the break.

Deceuninck – Quick Step – they have good options in Knox, Cavagna and Honoré. Having lots of options means that they should be able to make the move, and if they get there all the boys have the quality to finish it off. Honoré is fresh from his first pro win, he has a very good sprint, especially given the uphill finish. Cavagna can go long, while Knox can also win in this type of finish. The wolfpack have all the bases covered.

Ineos – will they get any freedom? Ganna, Narváez and Moscon are all good options for this stage, but Moscon is still quite close on GC. Narváez has the speed required for the sprint, and Ganna is Ganna. Hopefully Ineos don’t simply ride to protect Bernal.

Gorka Izagirre – this is a great looking stage for the Astana man. He has lots of experience and has the kick required to win from a reduced group. He’s not the only Astana man who could win this stage, they also have Sánchez and Felline as good options for this type of stage.

Matej Mohorič – he looked incredible on Thursday, which is ominous for everyone else who would like to win this stage. His power on the flat was impressive, which is crucial in terms of being able to jump in the move. He also has a fast sprint, which is important for anyone who wants to win from the break.

Peter Sagan – the finish is hard, maybe a little too hard for him, but you just never know with Sagan. Getting in the break will be part of his plan to challenge for the sprint jersey, he needs to start taking points on his rivals. If he makes the move, we know that he has the quality to take the win, but the climb to the line is hard, especially if he’s up against other riders with a big kick.

Alberto Bettiol – another rider in cracking form. If he makes the break, he’ll be one of the favourites to take the win. It’s been a while since we’ve seen him at his best, but the signs in this race have been very positive. If he makes the move, he’ll like the finish.

Paddy Bevin – a rider who can do just about everything. His recent form has been very impressive, all that’s missing is a big win. He has the engine required to make the move and the speed to finish it off.

Diego Ulissi – you could say this stage is a classic Ulissi stage. He missed a few months due to heart problems, but his recent form has been good. He’ll be trying for the break, but he’s a rider everyone will be watching, which will make it tough for him.