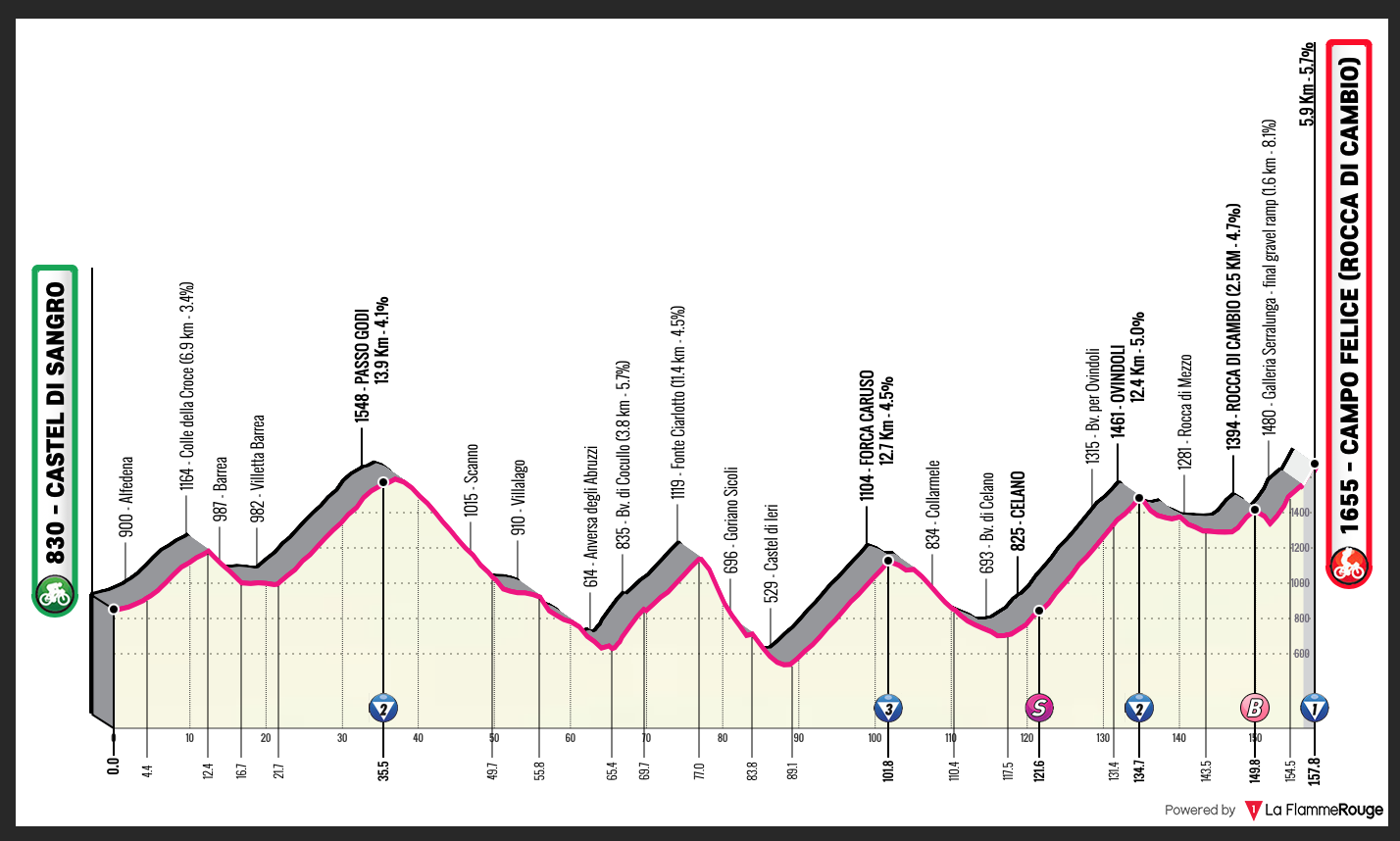 A day out in the mountains.

The stage is a short one, just 158km in length. Despite that the organisers have managed to cram four categorised climbs into the day, but none of the climbs are that hard if you take them in isolation. However, we’re now a week into a demanding race and you can be sure that this stage will be hard, and we could see a few riders drop out of the GC picture.

Another day with dark clouds and a threat of rain throughout the whole stage.

The first of the cat 2 climbs starts just 22km into the stage. 14.8km at 3.8% isn’t going to scare anyone, but it should help the break to form and start to build a gap. The descent is relatively straight forward, but it is fast. That goes straight into an unclassified climb of 11km at 4.5% and a cat 3 climb of 12.4km at 4.5%. As I’ve already said, the climbs in the stage aren’t the hardest, but they will cause fatigue.

The climb is 5.9km at 5.7%, the above image shows the important section which is on gravel. This is the reason it’s been made a cat 1 climb; it really shouldn’t be. How much of an impact will it have on the stage? That’s the million-dollar question.

Will we at last see a GC day? This one isn’t the hardest stage, who wants to control it and set up a big finish? Ineos and Deceuninck – Quick Step are the obvious choices, as Ineos will think that Bernal can win the stage, whereas the Belgians will be looking at the pink jersey for Evenepoel. I don’t see any other team wanting to work to control the break.

The start of the stage is good news for the attackers, as it climbs right from the start. This means we should see a strong group of climbers form the morning break, but will they survive until the end? Ineos will likely decide. At this point it’s impossible to tell what will happen, I think it’s 50/50. As the climbs aren’t that hard, I don’t think we’ll see any GC action until the final 2km.

Right boys, this stage is a big one. We don’t chase the break, that’s not our responsibility. We don’t go for the break, everyone stays around The Teacher’s Pet. The Hungarian lad is only 11 seconds ahead, he’ll blow up on the final climb. I want us to take up the pace with 5km to go, we have the riders to put the hurt on. Bernal is going to go for it, we all know this. Remco, stick to his wheel like glue, he’s not good enough to drop you. If everything goes according to plan, we’ll be in pink by the end of the stage.

Egan Bernal – the Colombian has impressed this week. We’ve had two stages where the GC riders could stretch their legs, and Bernal was right at the front on both occasions. Ineos will see this as an opportunity to take a stage win and start to put some time into their big rivals. Bernal was very impressive in Strade Bianche, he’ll cope well with the gravel section at the end of the stage. If the winner comes from the GC group, he’ll be the big favourite.

Remco Evenepoel – he’s looked impressive, so far. This is another big test for him, but as the final climb isn’t that hard, I would be amazed if he didn’t finish right at the front. Seated power is very important when climbing on gravel, and Remco has more power than most other climbers. He might not be as fast as Bernal, but he could surprise with a big attack.

Davide Formolo – a rider who normally goes well in Strade Bianche. He’s a little down on GC, but he could do well in this type of finish.

Giulio Ciccone – can he take advantage of his current run of form and take a stage win? Ciccone has looked very good this week, but he has used up some energy attacking. If he’s serious about going for GC, he needs to be careful about using up too much energy attacking when it’s not necessary. We’ve seen this year that he has a fast uphill sprint, he’ll be confident about winning this stage.

The breakaway versus Ineos. As Ineos are down a man, they can’t take up the chase too early, which hands the advantage to the breakaway. I’ll take a win for Bauke Mollema, and I don’t expect big gaps on GC.