As most of us are stuck indoors, I thought it would be the perfect chance for us to catch up with big Hugh. 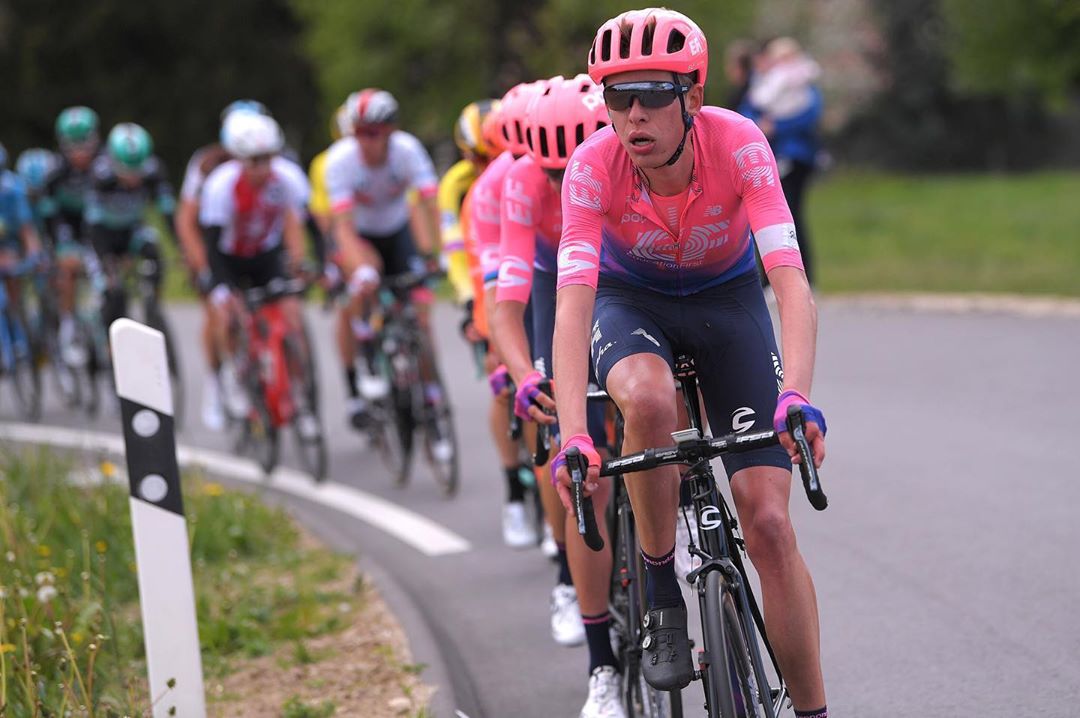 Who have been the most influential people in your career and why?

“There have been many people at many different stages at my career who have influenced me greatly. Starting with my parents and finishing with my current team now. Along the way, John Herety, my team manager at Rapha-Condor sticks out. He drilled in the basics of being professional and gave us a great racing programme to use as a springboard. Before that, a local man called Peter Kay who helped many junior riders find their way in the sport. He took lads to top junior races around Europe and like John instilled the basics in us.”

Which riders have you learnt the most from?

“From when I turned professional in 2015 I’ve been lucky to have had some great teammates, some real personalities. In Caja Rural we had David Arroyo who was a good laugh and never took things too seriously. Amets Txurruka and Pello Bilbao too, both very humble and never stressed.

More recently in Cannondale and EF, obviously Rigo stands out, he’s a big character and gets along with everyone. At the other side of the team you have somebody like Alex Howes. He’s a great bike rider but also keeps the riders going within the team. He’s considerate, thoughtful and knows how to get the best out of everyone whilst in his road captain roll. Also Sep Vanmarcke; he’s a fantastic leader within the team but with no fuss reverses his roll into a domestique and rolls his sleeves up and does what’s required. A lot of big-name riders wouldn’t do that, but he does it like it’s second nature.”

Which performances are you most proud of?

“It’s hard to say. I’m proud whenever I race my bike because this job is something that I’ve worked towards for many years so just being where I am is an achievement. My most significant results as a professional have probably been Volta Catalunya 2016 where I made a name for myself and more recently the Giro 2019 and my Tour de Suisse stage win in 2019. In most sports there’s more lows than highs, so when you achieve a goal and taste success it’s extra sweet, especially for me because I’m never going to be a rider that wins 20 races a season. It makes all the difficult times totally worth it and gives you a bigger appetite for more success.”

What did you learn during your time at Caja Rural?

“I learned that as long as you get the basics right everything will be ok. I had a good routine in my second year there and learned from mistakes I made in my first year which helped me achieve some good results. When I moved to Cannondale in 2017 I tried to over-egg the pudding and add new elements into my lifestyle. I started doing a lot of altitude training and trying to lose too much weight. Add on top of that a more demanding race calendar and I suffered a lot that year. Towards the end of the year I got back to basics and simplified things. It served as a reminder to not overcomplicate things and walk before you can run.”

You have developed into a leadership role. Did you find this a natural thing or something you had to work at?

“It has certainly been a natural progression and not something that has happened overnight. It’s something that I’m working on especially this year. Mainly to focus on always keeping a calm temperament when things don’t go well.”

Which races do you still want to do?

“I’d still love to do the Tour de France and Olympic games. Also represent Great Britain at the road world championships again would be nice. Hopefully within the time remaining in my career I can complete those things. Also I’d like to ride some of the one-day Ardennes races too, I think I could perform well in a race like Liege in the future when I’m a bit more experienced.”

Do you think you’ve changed much as a person over the last few years?

“Absolutely, any 20-odd year old in any walk of life will change and mature immensely at this stage of their life. In a high-pressure job like professional sport those changes are even bigger still. We face many challenges on a daily basis and have certain demands other young people don’t have. Making positive changes and adapting to new circumstances is what life is all about.”

What is your lockdown routine?

“At the moment I’m not doing a great deal. Typically in the morning I will train on the rollers for about an hour or maybe more some days. After that I’ll do some core training. I’ll have lunch and then relax for a few hours with a book and a cup of tea. In the evening I’ll do a few stretches and start preparing my evening meal. Before bed I’ll read some more and then drift off to sleep.”

How do you keep yourself motivated to train?

“I keep myself motivated to ride by getting on the scales every morning! Seriously though, exercise is the best medicine in life for anything. After a session you always feel better, never worse, so it’s important to give yourself that kick up the arse to get on the bike because you always get something out of it. For professionals, it’s still our job to train, despite what’s going on in the world right now, so we have to continue doing our duties and being prepared for what lies ahead.”

What are the last 3 books you’ve read?

“Most recent was Catch 22 by Joseph Heller, before that You Cannot be Serious by Matthew Norman (wouldn’t recommend) and before that The Day of The Jackal by Frederick Forsyth.”

What are the best thing you’ve cooked recently?

“Last week I made a dish with tripe in it. An ingredient not easily found in the UK nowadays but in Andorra it’s readily available. I cooked it with some root vegetables and barley and enjoyed it very much.”