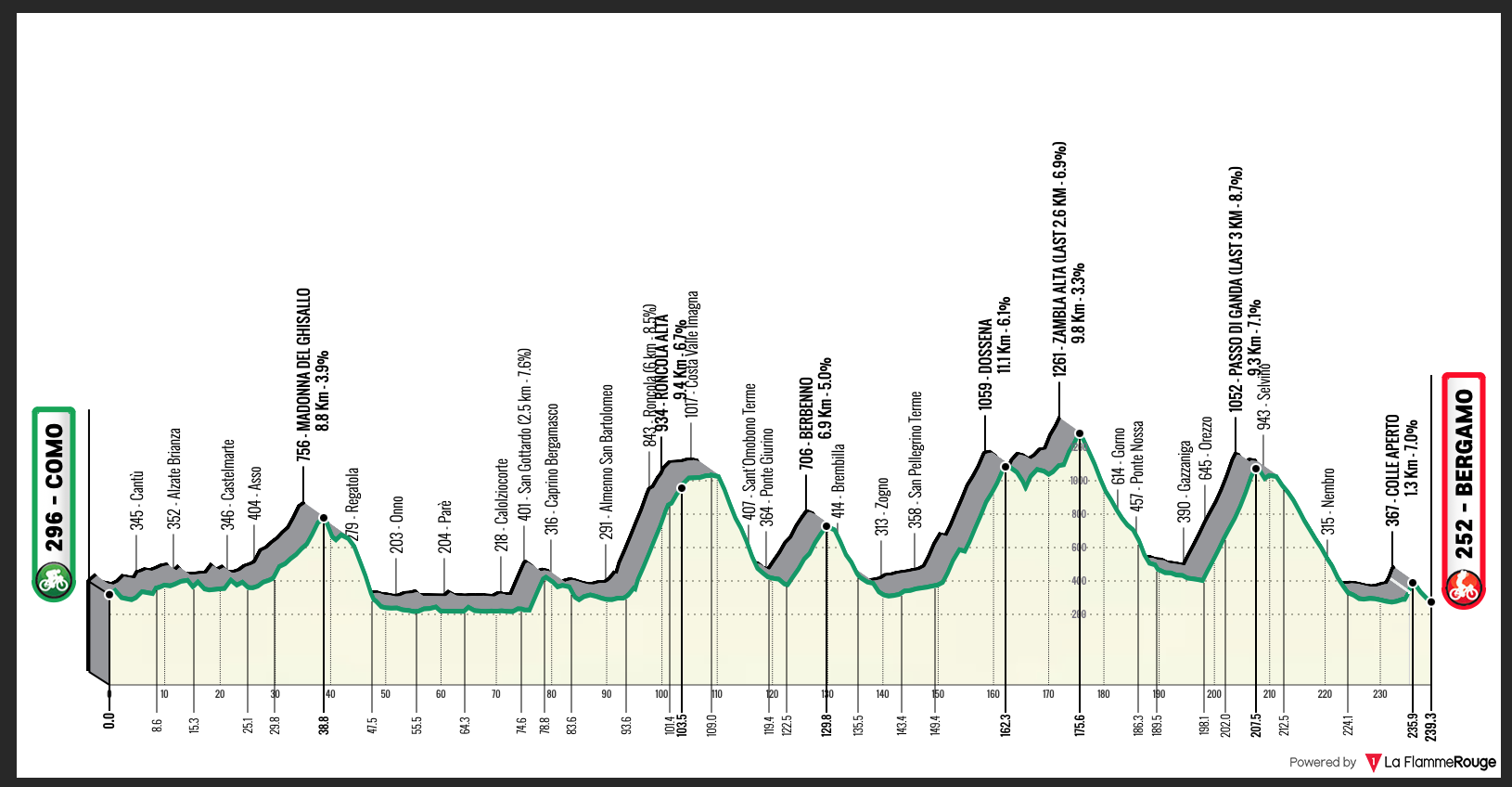 It’s time for the final monument of the year, and we’re in for a treat. The race finishes in Bergamo for the first time since 2016, a move that has a massive impact on the race. We have 4400m of climbing, that’s an awful lot at this time of the year. Between km 94 and km 207 the riders face almost 3000m of climbing, this is the crucial part of the race. We’ll have to wait and see how big the front group is as we go under the archway and onto the cobbles in Città Alta.

There’s a chance of rain throughout the day, and it will feel on the cold side.

The Dossena climb is 11km at 6%, and it should signal the start of the racing. It’s not the hardest climb, but the pace will be high.

The first of the important descents. It’s not overly technical, but if the roads are wet it will seem a lot of worse than it is.

The Ganda climb is the hardest hill in the race, 9km at 7%, with the final 2.5km averaging 9%. The crest comes with 32km to go, that’s a long way from home, but just wait until you see the descent.

Check out the hairpins! This would be tricky in the dry, if wet it will be a vital point in the race.

The final climb is short and beautiful. Positioning is important as the riders go under the archway that leads onto the cobbles. Once their dealt with, the riders move back onto tarmac and the road ramps up, perfect for those who want to launch a stinging attack. From the crest there is 3km to go, and all of it is downhill.

Another day that will be dominated by Deceuninck – Quick Step, Jumbo-Visma and UAE. The Belgians are the strongest, and it’s not even close. Alaphilippe, Almeida, Bagioli, Cattaneo, Devenyns, Evenepoel and Vansevenant is about as strong as you can get, they look a formidable team. Like in most races, they’ll get the race they want. It looks like Alaphilippe, Almeida and Evenepoel will be their main cards to play, that leaves four others to make the race very hard.

Jumbo-Visma have the big favourite, but the team aren’t as strong as they would like. They’ll be hoping that Kruijswijk, Bennett, Bouwman, Oomen and Vingegaard can all deliver, Roglič will need help in the final 50km, he cannot afford to be outnumbered by the Wolf Pack.

UAE will also be hoping for a big day. They’ll look towards Hirschi, Formolo, Ulissi and McNulty as Pogačar looks to win his second monument. Their form has been a little inconsistent of late, but they can still deliver a big ride on Saturday.

The race is likely to kick off on the Ganda climb, a long-range attack could be successful, especially with a tricky descent to follow. For the move to stay away it will need representation from a few teams, somebody had best tell Remco to take it easy. Chasing down a strong move will need quite a few domestiques, that’s why it’s likely to see a team like Deceuninck – Quick Step set a fast pace earlier in the day. If they can reduce the size of the peloton, it increases their chances of using their numbers in the finale.

Jumbo-Visma have some big decisions to make. The flat finish isn’t great for Roglič, and the final climb is short and hard to split the best riders. This means they must look to make the race tough earlier in the day. I think we’ll see them set a fast pace on the two big climbs, before Roglič launches a big attack on the Ganda climb. The climb is a long way from home, it’s very unlikely we’ll see a solo move win from here, but it’s a chance to get a small group away. As long as Roglič isn’t outnumbered by Quick Step riders he’ll have a good chance of winning, at least he’ll have a better chance than wating for the final climb. He has great form but winning on a profile like this is going to be hard for him.

Primož Roglič – current form is amazing; he’s managed to hold the form that helped win him another red jersey. The big problem for Primož is the distance between the crest of the Ganda climb and the finish. He has won some races that finish on the flat, but he’d much rather it was an uphill finish. Vingegaard was strong in Emilia, he needs to be even better here. Deceuninck – Quick Step will have multiple riders left in the finale of the race; it is vital that Roglič isn’t alone. He starts as the favourite but winning this race will not be easy.

Julian Alaphilippe – was stunning in Flanders just two weeks ago, I wouldn’t read too much into his performance in Milano-Torino. Despite a glittering career, Alaphilippe “only” has one monument to his name, which is a surprise. The route looks good for him, as the climbs aren’t ridiculously hard. He’s very fast in a flat sprint, and he’ll love the look of the final climb. Starting in the strongest team gives the world champion a big advantage, he’s going to be a hard man to beat.

Remco Evenepoel – another rider in incredible form. He took some stick for his tactics in the world championships, but he responded well with a solid ride in Emilia and a brilliant solo win in Coppa Bernocchi. He won’t win in a sprint, so he must attack, something he loves to do. Wet roads will test his descending skills, but I think he’s already improved this part of his armoury. He won’t be dropped on the climbs, and he provides his team with another great option.

João Almeida – current form is excellent, he’s looked great in Luxembourg, Emilia and Milano-Torino. It will be interesting to see how Quick Step play things in the closing stages of the race, Almeida has a sprint that could beat most of his rivals. Expect to see their three leaders rotate the attacks until they manage to escape the bunch. Then we’ll see if anyone can chase them down.

Tadej Pogačar – his form just isn’t where he’d hope. It is improving, but Pogačar is looking a little short of his best. It wouldn’t surprise me to see him pull an exceptional ride out the bag, but he won’t start as the favourite.

Michael Woods – form is good, winning will be incredibly difficult.

Adam Yates – same as Woods, I just don’t see how he wins this race. He’s climbing well but lacks a sprint and the engine to go solo.

David Gaudu – even less of a chance of winning than Woods and Yates. Something weird will have to happen for the Frenchman to cross the line first.

Alejandro Valverde – you can never discount a rider of Valverde’s class. He’s been there, bought the t-shirt and won it all. His current form is good, but can he really win a monument at the age of 41?

The Wolf Pack v Roglič v Pogačar. The lack of a leg breaker of a climb, and the distance between the Ganda and the finish swing the advantage the way of the team with numbers. I see a group of around 10 riders break free after the Ganda, and it will feature three of the Wolf Pack. When the attacks stop Remco Evenepoel will take a solo win.