I first interviewed Hugh Carthy back at the end of 2014, just as he was about to embark on his professional career. Over the course of the last six years, we’ve watched him grow as a cyclist, and I’ve been lucky enough to get to know the man behind the public persona. Readers of this website immediately took the big man to heart; he seems to represent something we all admire. Hugh’s rise to the top hasn’t happened overnight, it’s taken a number of years, learning from others and working hard. In this interview I’m not going to go back too far, I’m going to pick up at last year’s Giro. 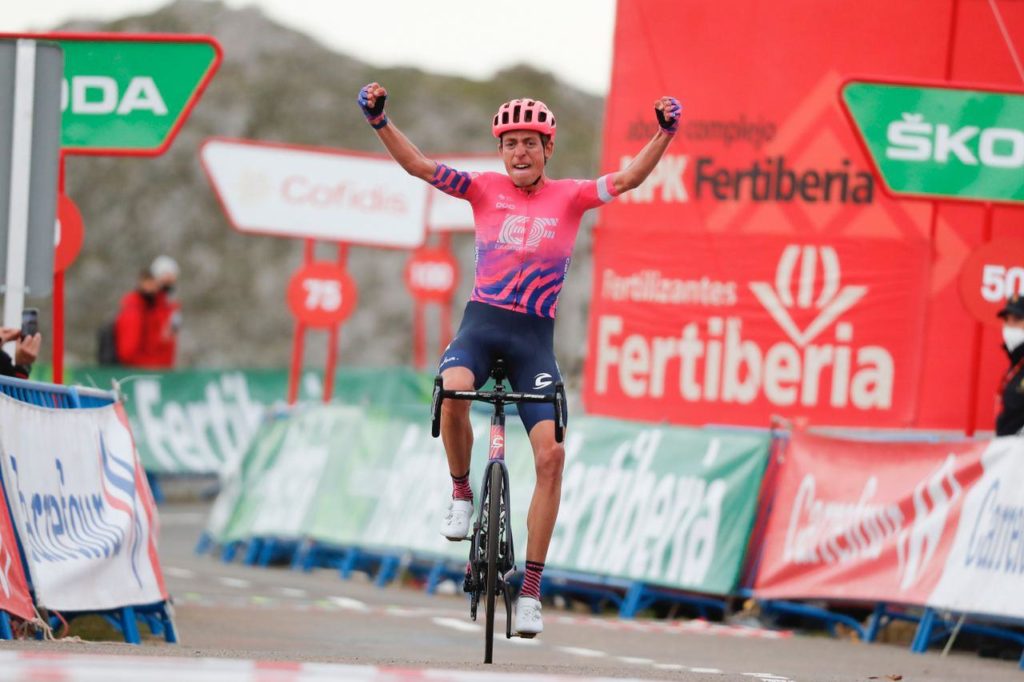 The final week saw Hugh mixing it with the big boys. He was fourth in the Lombardia stage, climbing the Civiglo faster than most GC riders. Next day it was he who was chasing Nibali up the Mortirolo. This is where he started to step forward as a proper grand tour rider.

“The result there wasn’t top 10 or a glittering podium, but for me personally, and those watching closely know, I was up there battling with the best for three weeks and putting in a good TT too. I had one bad day and lost time, but apart from that I was strong and consistent. I knew all I had to do was eliminate, or limit, the bad days and I had the potential to battle for top 5 in grand tours.”

After this he headed to the Tour de Suisse and entered the mythical climber category, taking a near 100km solo win in the final stage. For me, he had sealed his status as one of the best climbers in the world. Time for 2020.

Third place at Tour de La Provence was a great start, but then came the Corona virus and everything was put on hold. Once racing started back up, Hugh headed for his first Tour de France, to ride as a domestique for Dani Martínez. When the Colombian crashed during the second stage, it was Hugh who had to go back and sacrifice his own chances, it’s all part of being a teammate. Then came stage 10, an eventful day in the crosswinds. 10km into the stage and Hugh hit the deck in an innocuous looking crash. Unfortunately he cracked a bone below his elbow and damaged his wrist, he was in a considerable amount of pain. Fast forward three days and he played a huge part in Dani Martínez’s win, despite the pain he was suffering. Yet again, Hugh had proven his worth as a teammate, but I wanted more!

“From Paris I flew direct to Imola to race the world championships. I had a week to recover and relax there and receive treatment for my injured arm. It was a nice week with a different group of riders and staff, and I enjoyed it. During the week before the worlds, my own team (EF) contacted me to say they were a rider short for Flèche, so I had to travel to Belgium the night of the world championships. There was no real ‘role’ for me in Belgium, the team knew I was tired mentally and physically and ready for a break. After that I returned home to Andorra for a couple of weeks. There I was able to switch off for a few days then resume training for the Vuelta. Soon I started to feel good on the bike and confident I would be fine at the Vuelta.

It was put to me during the Tour I’d do the Vuelta. It was simply a case of turning up and racing with no pressure. It was a difficult period for all the teams, and they needed to find riders to race due to the tight schedule. At first, with my injury in the Tour and being tired I wasn’t convinced, but later on in the week or two before the Vuelta my attitude changed, and I believed a good result was possible and the form was there.”

So Hugh arrived at the Vuelta feeling good and looking to push for GC, but he wasn’t their only option, as Martínez and Woods were also at the race. Was he the leader for the race?

“No, we were there to support Dani Martínez in his GC bid. I put my hand up to have a go at the GC, which was granted, but it was clear that the main objective was Dani.”

A crash in the opening stage quickly changed the plan, as the Colombian hit the deck and was dropped early on the final climb. On the other hand, Hugh was up there with the very best, in fact he was very unlucky not to take the opening stage, with a well-timed attack in the closing kilometre. He was now the team leader; the team were fully behind him.

“It’s a position that I’ve wanted to be in for a while now, and I’ve been mentally preparing for it. It’s a different role, but one I believe I belong in and thrive in.”

After a strong start to the race, Hugh was sitting fifth on GC, but then came Aramón Formigal. He was there back in 2016, one of the few riders to actually finish inside the time limit, not like quite a few others. This year it was a little different, especially the weather. I spoke to Hugh that morning; I could sense he was going to do something special.

“I don’t think the cold weather affects me as much as other riders. I look forward to the miserable weather whereas other riders dread it, that can be a major psychological advantage.”

“Once we got to the ‘hard’ section I knew I would do a great ride. At that point to stay in contact with Roglič and Carapaz would have been a great ride, so every metre of the climb I ticked off with them was a bonus. I knew the climb got easier in the last km, so that was my finish line. I saw Roglič struggling a bit and I think Carapaz was concentrating more on him than me, so I took my chances and went for it and didn’t look back. Only when I looked back with 500m to go, and couldn’t see anyone nearby, did I know I had the stage in the bag.”

And all of this was done without a power meter, that will please you old school boys and girls out there.

“I decided to take it off to save some weight to make the bike as light as possible. I enjoyed it. It was deceiving though, especially with good form. I didn’t know how many watts we were racing the climbs at, and I felt great, so after the stage I’d say “that wasn’t that hard” but it turned out we were doing 6.2w/kg for half an hour after a hard stage. I think it’s something I’ll continue to do.”

The lack of a power meter, the short and sweet TV interviews, the old school approach, it’s safe to say that Hugh is a massive favourite among us cycling fans. He’s also developed a reputation as being a man of few words, something which just isn’t true, but it adds to the intrigue.

“I keep my cards close to my chest in TV interviews, so people think I’m shy or miserable but that’s not the case. I enjoy having a laugh with my friends and team, etc. People know me and my sense of humour.”

Hugh’s approach has certainly resonated with a lot of people, he is now a firm favourite with most watchers of the sport.

“In other sports the ‘peoples champion’ is a big deal. To be liked by the fans is special. I try to be myself, even with flaws and I think people appreciate that.”

Third place in the Vuelta was a huge result, especially when you consider the strength of the other riders in the top 10. This was a performance that will stand the test of time, it was an exceptional result. You folks know I love a stat or two, how about this one? Hugh has never started a world tour race as the out and out team leader. EF have nurtured him over the last four years, but, at times, it’s felt like a long road.

“I think the team were giving me time to develop naturally without excess pressure. At times it could be frustrating, when I knew I had great form, but the team were adamant things would work out for me later on. Things happen when they happen, and I think setbacks and disappointment all add to my profile as an athlete. Every experience, good or bad, adds to my ability as a rider. I think I’m quite strong mentally which I attribute to the bad times. I’ve not had everything my own way during my career and definitely had some low points.”

After patiently waiting for his opportunity, Hugh will now have a different role in the team. His performance in the Vuelta has thrust him forward as a serious grand tour contender, he is now swimming with the big fish, but how will he cope with the extra pressure on his shoulders?

“It’s satisfying and calming; I don’t think it’s going to add a load of pressure to my life, I feel like I’ve removed pressure. Now I can say I can do it and have the proof to back it up. In certain ways it’s easier now, I know I can do it and don’t have to try and prove it anymore.”

A new chapter is about to begin in the life of Hugh Carthy, I can’t wait to see what it brings.