The race against the clock. 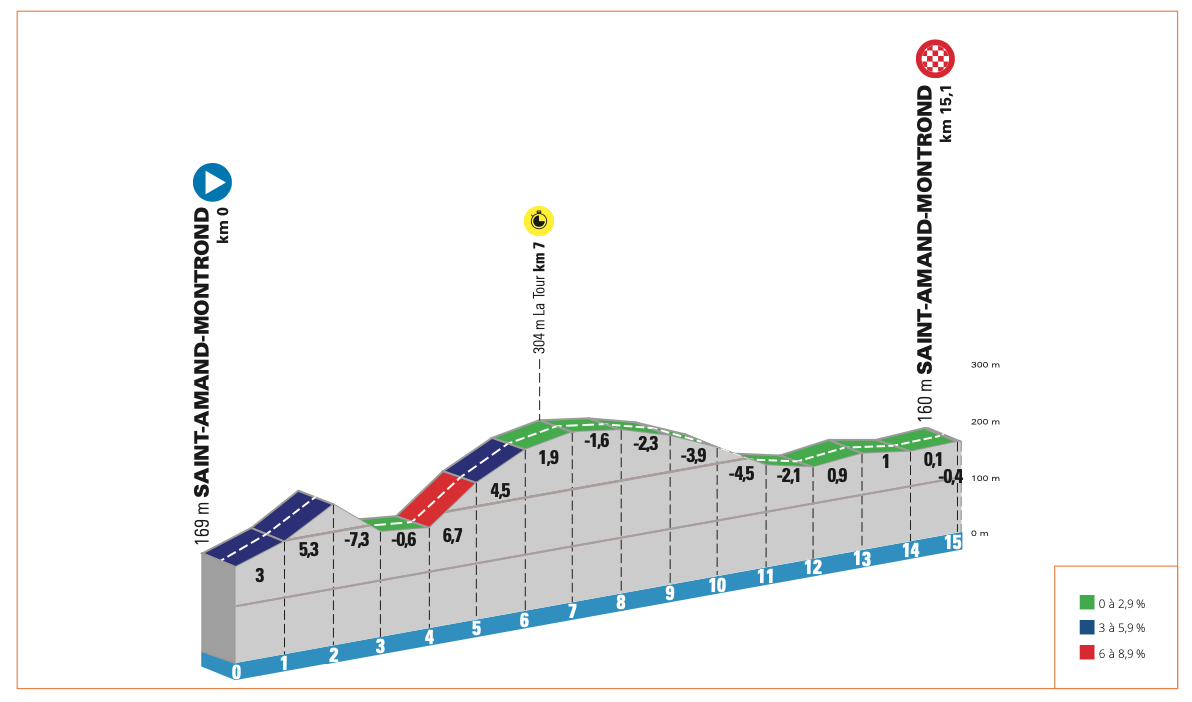 With very little flat, you wouldn’t say this is a day for the specialists. The majority of the opening 7km is uphill, it gives the punchy climbers a great chance of leading at the intermediate split. Around 5km of fast descending follows before a flat final 3km to finish the stage. It will be hard for riders to make a big difference on the descent, there is a big chance that this is all about the opening 7km. First to the top wins? It’s not a guarantee, but the climbers will be really interested in this stage. However, the gradients aren’t overly difficult, some of the TT riders will hope to beat the climbers.

1.9km at 5.7%, certainly the harder of the two climbs. It’s on a narrow little road and will feel harder than it really is. This is the chance for the puncheurs to seize the advantage.

The descent is fast and not technical. Given the gradients, most will be in their aero tuck and not pedalling. This also means all riders can go full gas in the opening 7km, knowing that the descent can be used for recovery before the final 3km of flat.

With heavy cloud for most of the day, there is a chance of rain. At this stage, there is no way of telling if the heavens will actually open. What we do know is that the wind is coming from the south-west and will slightly weaken throughout the day.

Max Schachmann – 4th in the recent TT in the Algarve, the best of the non-specialists. The German is currently wearing the yellow jersey after a brilliant opening three stages. After winning the uphill TT in the Basque Country, last year, he’ll start this stage as one of the favourites. He is an incredibly punchy rider; he would expect to put quite a few seconds into the heavier riders during the climbing section. He is also a very fast descender; I don’t see anyone taking time back on him during the downhill.

Julian Alaphilippe – his win the Tour de France TT was one of my favourite moments of 2019. The opening stage of this race showed that Alaphilippe is getting into some good form, but is he strong enough to win this stage? This is a day Alaphilippe would have been looking forward to, this is his hometown. Knowing the roads will be important, and with the extra motivation, you can bet he’ll post a very fast time.

Dylan Teuns – fresh from his TT win in Andalucía, he’ll be hoping to back that up here. This TT is less to his suiting, the climbs aren’t as steep as they were in Spain. However, the Belgian should still be challenging for the podium, propelling him into a strong GC position.

Thomas De Gendt – in my overall preview, he spoke about wanting to do a good TT. The opening few stages haven’t been to his liking, but it’s also meant he’s been able to save some energy for this day. After his TT performances in 2019, it wouldn’t be a surprise to see him winning.

Søren Kragh Andersen – after a tough 2019, the Dane looks back to his best. He was very strong during the opening weekend, and he’s backed that up here in the opening three stages. Remember, he’s a very good rider against the clock, but hasn’t won a TT as a pro. I think he has a good chance of causing a surprise.

Victor Campenaerts – is it too hilly for him? The answer has to be no, especially given the way he was climbing in the UAE Tour. He would have preferred a lot more flat than the stage has to offer, I find it difficult to believe he can climb as fast as the puncheurs meaning he must take time back on the descent. As I’ve shown you, it will be very difficult to do this.

Stefan Küng – he’s in the same position as Campenaerts. Küng is a classic TT rider, and would have preferred 15km of flat. Can he limit his losses in the opening 7km? How much time can he take back in the remaining 8km?

Alberto Bettiol – you’d be forgiven for thinking he wasn’t at this race, but I think there might be a reason we haven’t seen him yet. Having eight riders in each squad means that EF have been able to protect Bettiol for this stage. He already has a TT win to his name in 2020, a solid win in Bessèges, but this is clearly a huge step up. EF have a very good TT bike, something that cannot be underestimated. The current Flanders champion won’t mind the punchy climbs either, he has a good chance of posting a fast time and spending some time in the hot seat.

Kasper Asgreen – TT beast! The Dane can seemingly do it all, but I’m not sure he has the explosivity to stay close enough to the climbers in the opening half of the day. Saying that, he is a rider who likes to prove people wrong, so watch this space.

A don’t like a TT under grey skies, the rain could have an impact on the day. If I forget about the weather for a minute, and simply look at the route and the riders, I have to be drawn to the puncheurs. The climbs aren’t hard, but the TT riders won’t be able to match the intermediate times of those guys, and making up time in the closing half will be tough. I’ll go German and take a win for Max Schachmann.