Alex Kirsch is a rider I’ve followed for a number of years. After fours year riding at pro-conti level, he made the step up to world tour in 2019, signing a three-year deal with Trek-Segafredo. In the last two years he’s made significant progress, quickly moving through the ranks and now is one of the team’s trusted lieutenants. He is a vital part of the lead out train, and also a crucial link in the classic’s squad, he is a very important rider for Trek-Segafredo. The team have a very strong classics unit, and this helped them to win Omloop Het Nieuwsblad at the start of the season, which was a huge relief as they did struggle in 2019. 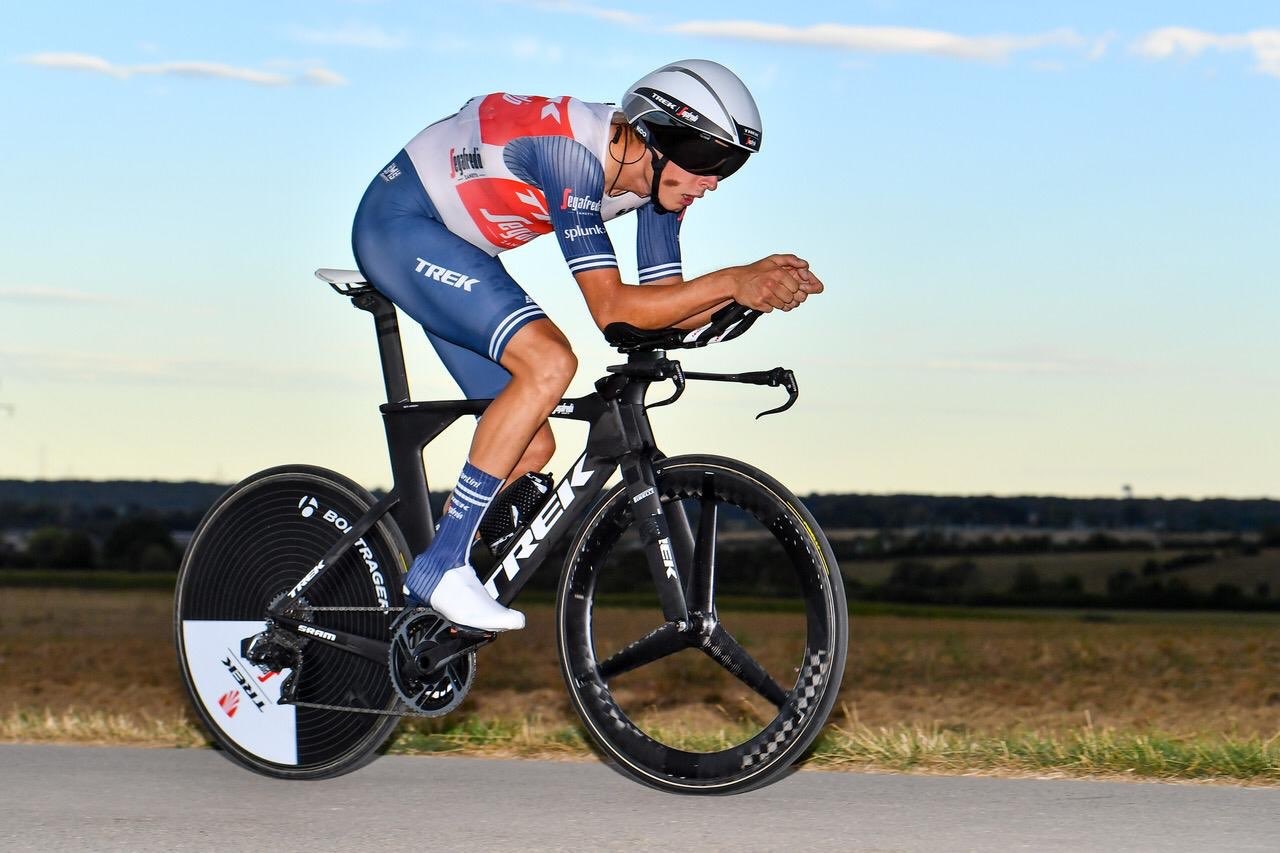 “It is true that 2019 was disappointing in terms of team results. In the end I didn’t realise it straight away as I was just happy in the first place to ride for Trek and on a personal level I was performing good. I noticed some things that in my opinion were not going so well, but as I was new to the team I just followed orders. At the beginning of the 2020 season I could immediately feel that we were going to have a great season. The whole dynamic was different. From the first team camp on we were pushing each other, we looked confident but not arrogant and we were respecting each other for our qualities. It was just a great start to the season and then Jasper winning Omloop wasn’t a surprise.”

Trek-Segafredo move into the new season full of hope and expectation. They will arrive at the big races with Kirsch, Theuns, Simmons, Pedersen and Stuyven which is an incredibly talented team.

“I think we should just continue to work the same way we were working this year. We shouldn’t take anything for granted and start from zero again. The goal needs to be present with the whole team, race hard and try to win again a classic.”

When not racing in the big one-day races, Alex is a regular in the sprint train. 2020 saw Trek-Segafredo become one of the best sprint trains in the business, Alex’s role shouldn’t be underestimated. When they arrive with a long train, Alex will normally operate in position 4, playing a vital part in the closing kilometres. A perfect example of what the team are capable of was in the Tour of Poland, when Alex was riding in position 4 and helped play a role in a magnificent Mads Pedersen victory.

“My work now is usually to organise and coordinate the sprint train. That can be number 3 or 4 usually depending how many riders we have for the train. It is of course a job with a lot of responsibilities. You have to mix physical and mental efforts. Ideally, I can coordinate Ryan Mullen to position us in the last kms and then it’s up to me to decide on the tactic in the last 1.5km to 500m. The last man should then usually not think too much anymore and just launch the sprinter to full speed. In Poland it was actually fantastic. There were no shoulders or pushing only pure horsepower. It was a beautiful effort as everyone in the team was involved in that sprint and did a perfect job. It was actually the first time on this finish that a team managed to lead the whole last straight and win the race. We wanted to come later but in the moment I decided to go earlier and just do a fast old school lead out. The next day many riders came to congratulate us for that lead out, saying they haven’t seen anything like that since the HTC and Lotto days. I was proud of that effort!”

The promotion into the sprint train was thanks to our friend, Eddy Theuns. He spotted something in Alex, and the rest is history!

“Well, I guess to have a good career or to stay in the WT you need to find a niche that you’re really good at. This can be by winning races or by being an excellent domestique. Physically I have a decent sprint, I have a good 1-3min power, I am very tall, and I can go smoothly through the bunch, so I always thought that I could be really good doing lead outs. Then afterwards you need to get the chance to make the team and teammates believe in you. Luckily in 2019 during the Binck Bank Tour Eddy gave me the trust to lead him out and we did very well. Onwards he persuaded the other riders to trust me too, and from then on I got that job within the team.”

When the team have a short train, Alex can find himself moved up the order. He played a big part in Pedersen’s sprint success in this season’s Binck Bank Tour, riding in position 2, he has the attributes to be successful in any spot in the train.

“Yes, usually you can’t have the luxury of having 6 riders available for a sprint train. So sometimes you need to adapt, and I would say I’m pretty good at that. As I said before I’m best at position 3, because you have more impact on coordinating the sprint and then a rider like Jasper or Eddy who is a bit more explosive than I am to launch the sprinter. But I must admit I was also very happy to experience position 2 in Binck Bank and show that I can be used in different scenarios.”

As he is good in a sprint train, it’s not a surprise that Alex is also very strong in crosswinds, just like most of his Trek-Segafredo teammates.

“I must say that I really don’t like rain and wind, but I found out that it’s much more enjoyable when you are in the front and hurting the others than the other way around. The same qualities of the lead out are demanded in crosswinds. You need to be able to analyse quickly, be good at positioning and being a bit fast helps a lot!”

Due to the nature of his career, Alex has only ridden in one grand tour, despite being 28. Riding multiple three-week races usually plays a crucial role in developing a rider’s engine, something Alex is keen to do.

“Yes, of course I hope to do grand tours regularly from now on to the end of my career. Having only done one so far is due to the fact that I spend 4 years in PCT and in a regular season I would have done one this year too. I was in the preselection for the TDF but unfortunately didn’t make the cut. With the classics clashing with the Giro and the Vuelta, there wasn’t other chance this year. I felt like I improved physically after finishing the Vuelta last year, so I’m looking forward to how much I can still progress.”

Despite the lack of grand tours, Alex has made significant improvements over the last few years, something I’ve been very impressed with.

“Yes, I am actually very happy with my development. You have to realise that in 2019 I got hired as one of the last riders to fill the classic squad and now 2 years later I’m the “road captain” and a trusted domestique for the team leaders in the classics, sprints and stage races. I’m always progressing step by step since I turned pro so I’m very confident to still have margins to improve physically. As you mentioned earlier, I’ve only completed 1 GT. On top of that, I feel like I’m also still learning and gaining in experience. I believe there are still a few years left until I reach my maximum capabilities.

I have developed quite dramatically since turning pro. On a physical point of view I got stronger, but I also understood my qualities and matured as a person. ”

Every once in a while, Alex does get the chance to chase personal glory. That race is usually Le Samyn, the gritty race held in deepest, darkest Belgian, and usually features horrible weather conditions. He’s a regular top 10 finisher in this race, but the win has just eluded him. This year we saw Jasper Stuyven riding as a domestique for Alex, payback for his help just days before in Omloop, but despite trying on a number of occasions he had to settle for 7th place.

“There are not many races that I can go for the win with my capabilities. It needs to be hard enough, that all the sprinters are dropped but just not too hard for me to be dropped. So usually these Belgium semi-classics are exactly that type of races where I can perform really well. I value the fact that Jasper helped me that day very highly! It was of course a “thank you” for my help in other races, especially in Omloop a few days earlier but also a sign that he respects me as rider. I was sad not to win it, but I will remember that moment deeply.”

Another race that Alex has come close to winning is the Luxembourg national championships. He’s finished second on three occasions, but the win just hasn’t happened.

“Becoming national champion is not an obsession. Although, having been so close to winning a professional bike race is something that annoys me a bit and I hope to be able to change that before the end of my career. Of course I would like to wear the national jersey also at some point in my career.”

2021 will be a contract year for Alex, something I thought would heap pressure on his shoulders, but due to his past he views things in a different way.

“No, I don’t feel any pressure. It was hard when I was in smaller teams. There I suffered pressure, but now my job is to help the team and not to get as many results as possible. Sometimes to get results you need to be lucky, but to do a good job as a domestique you don’t need to be lucky, you just need to perform well throughout the year and I’m pretty confident that I’ll manage to do that.”

“This is a pretty simply question to answer! I hope I can help Trek-Segafredo to win another classic, ride the Tour de France and win a bike race.”

As simple as that!