Andreas Leknessund is a rider who already has a huge reputation, he is the best rider stepping up from under 23 level in 2021. Make no mistake, he is a rider who could potentially dominate the sport in years to come, he is that good. Team Sunweb/DSM spotted his talent early and secured him on a three-year deal back towards the end of 2019, allowing him to ride the 2020 season with Uno-X, finishing off his under 23 career. The Norwegian team made the move to pro-conti level for this season, and secured an attractive looking race program, which started with the Volta ao Algarve. Our young friend faced up against the biggest riders in the world for the first time, and walked away with a top 20 result. 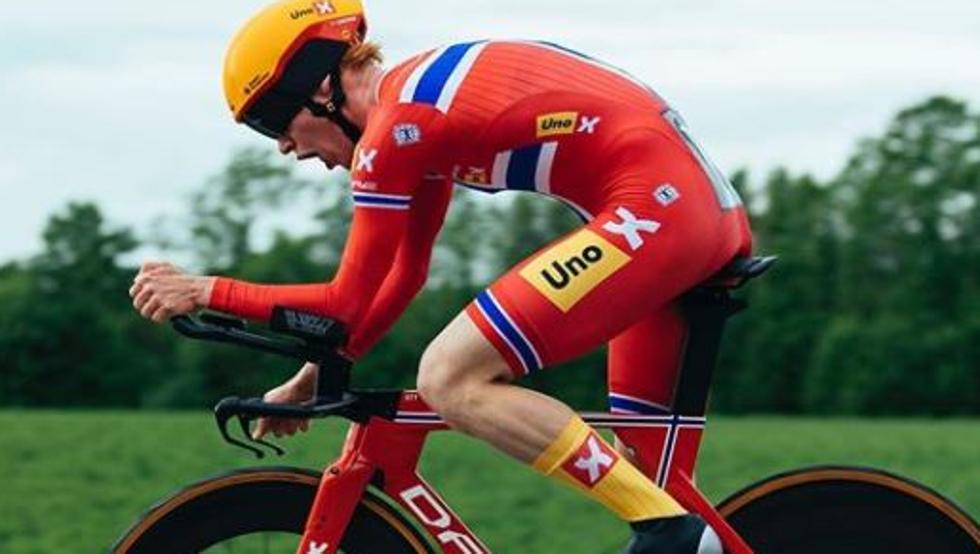 “For me it was a nice experience. I got to taste the level of some of the best riders in the world. I was not too scared, but I also realised that I still have some things to improve before I can call myself a top elite rider. But I know that I finished my season on a better physical level than I started in Algarve.”

After such a promising start to his final year at under 23 level, the lockdown would have hit hard, but already having secured a world tour contract would have made life a lot easier for Andreas. With many riders frantically trying to secure pro deals, he was able to sit back and not stress about the lack of racing and a seriously reduced season.

“I choose team Sunweb/DSM because I really like their philosophy, and way of working, especially with young talents. I do believe that is the right place for me to continue developing the next years. For sure it was good to know that I already had a World Tour contract. It gave me the opportunity to ride more aggressively, and to focus more on the longer term, knowing that I don’t need to get any results.”

First race back was the Norwegian TT championship which he incredibly won in 2019, despite being just 20 years old. Returning as defending champion meant the pressure was on.

“For sure it was really nice to retain my TT title. The result, and the jersey is really honourable. But most important is that my performance this year was way better than last year. It showed that I had improved during the last year, which had been affected by a shoulder-injury and corona lockdown.”

After the lockdown Andreas was flying. Not only did he retain his Norwegian TT title, but he also won the Euro Championship under 23 TT crown, the Harjell TT race and the one-day Lillehammer GP. Impressive as these results were, his next race was a big moment in his young career, as he can face to face with some of the biggest hitters in the professional peloton in the Tour de Slovaquie. Despite racing against DQS, Sunweb and Bora he managed to finish 4th on GC, a hugely significant result.

“Slovakia was a really nice race. The level was high, but not higher than I could handle it in a good way. It gave me confidence that I am ready for stepping up this season. Also really nice to be in the same peloton as Team Sunweb! Their way of riding really appealed to me, and I also felt that I were able to challenge them a bit, sometimes.”

One of the biggest disappointments for the under 23 riders was the cancelation of their showcase event, the Tour de l’Avenir. We all understand why, but it did rob Andreas the chance of adding his name to the long list of winners, something I’m sure he would have done.

“For sure that was disappointing. I was really looking forward to that race. But mostly it made me realise how unsure everything was, even at that point when things seemed to be better, and the cycling season was about to start up again. It really made me fear for the rest of the races as well. We still went for the l’Avenir pre-altitude camp with Uno-X, as planned. That was really nice.”

As the under 23 world championships were also cancelled, Andreas was thrust forward to compete in the elite category in both the ITT and RR. Finishing 13th in the TT immediately caught my eye, especially when you consider Andreas managed to finish ahead of a number of big TT engines.

“At first, I was quite disappointed actually. The TT in the worlds was not one of those days were everything just floats perfect. Maybe I had too high expectations, and really dreamed of having the “day of my life” on the bike. My power meter did not work that day, and the wind made it really hard to pace and ride with the confidence I’d had earlier this year. But soon I realised that my performance was really good, and that I should be satisfied with my performance. Under the circumstances I think 13th place is a really good first attempt.”

Then came the road race.

“That was a crazy experience. For sure it was a really hard race. It also may be a bit too hard “first meeting” with the pro peloton at that level. The race was way longer than any race I have done before, but still motivating to get the chance to ride an elite world championship. I also in a way get motivated by getting “beaten up” by the elite in a way like that. It’s good to know that I may not be as strong as I may think, sometimes.”

After testing his legs at the elite level Andreas rounded out his season at the Giro della Friuli. Due to the cancellation of a number of races, this was a big point in his season and the perfect chance to end his under 23 career on a high. The race was poetry in motion with the Uno-X team winning the opening TTT, Andreas winning stage 3 and also taking home the yellow, green and polka dot jerseys.

“To win the TTT was special. To win as a team in that way was really nice. Especially because it was my last race of the season, and for Uno-X. To win the GC was also for sure memorable, but the GC win was just proof of how we rode as a team in that race. I really enjoyed the race, both on and of the bike. I could not dream of a better way to finish my years with Uno-X. For sure. It was really fun to finish like that and it also confirmed that I am ready for bigger challenges.”

His results at under 23 level means that Andreas arrives in the World Tour with a big reputation, but how will he cope with the extra pressure?

“Normally I do not feel the pressure and expectations I might have. My philosophy is to develop step by step in the long term. I am quite calm about getting results. I know that if I focus on developing day by day I will achieve the results I deserve.”

What areas does Andreas think he can develop further?

“For the coming years I want to keep this way of developing into being as complete as possible. I may see the tactical and technical aspects as something where I have probably the most potential for improvement at the moment.

My first goal is to adapt to the team, and to handle the WT level. If that goes as I hope, I believe that I also will have the chance to aim for some results for myself. But I really don’t know what to expect in terms of results.”

And what is he looking forward to the most about riding at the top level?

“First of all I am looking forward to meeting my new team and teammates. I am also looking forward to some new and harder challenges in the races. The next year everything will be bigger, and I really feel that I am ready for it.”

You will have gathered from this interview that Andreas is a hugely talented TT rider and he also climbs very well. Just how would he describe himself as a cyclist?

“That’s a hard question. I’ve been trying to figure out that myself as well. At this point I am not sure in which category I will put myself. To make it even harder, I feel that my punch in short climbs is a bit underestimated, so maybe puncheur? The only thing I am sure about is that I will never become a sprinter.”

I think I know how to describe him, an undoubted talent, a rider who could be one of the best in the world.