As most of us are stuck indoors, I thought it would be the perfect chance for us to catch up with Sepp Kuss. Enjoy! 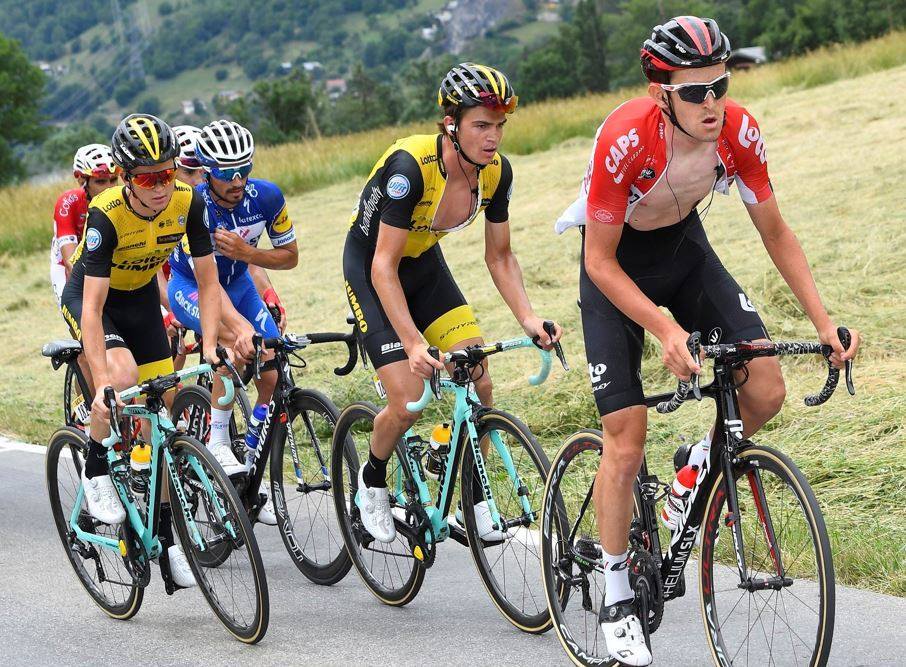 Last year was the first time you did two grand tours in one season… and shined in the second one! did you noticed some improvements?which ones?
The biggest improvement I made was getting used to more race situations that happen over three weeks and how to manage them physically and mentally. Everything situation takes a lot of energy, but after the riding the Giro with Primoz in the leaders jersey, I learned how to handle different scenarios.

What did you do between races?
Well, a week after the Giro I rode the Dauphine and I actually felt really good- a feeling I never had in the Giro. After the Giro and Dauphine, we realized that I need quite a bit of training to get into my best shape, so I worked quite hard for three months, but I really enjoyed myself. During that time I went home to Colorado and did a lot of training in the mountains and heat. It’s difficult to get much lower than 1600m in Colorado, and most of the climbing is between 2000 and 4000m, so it’s a great place to train. I think even more importantly, when I go back to the US I can be more of a normal person, having beers at the barbecue, mountain biking, going into town, and doing things that keep me fresh.

Do you see yourself as a grand tour contender some day?
Eventually I hope to be a Grand Tour contender. Physically, I think I can cope with racing for three weeks and it suits me, but what I need to work on the most is keeping the incredible focus for a whole Grand Tour. As a support rider, you can mentally switch off a bit on days that aren’t as crucial, but going for GC it’s a complete different mentality. That’s something I still have to learn, and it’s not normal for me to be nervous all the time, so I would have to do it in a way where I could be a ‘relaxed’ leader.

Would that be possible in Jumbo?
I think so, at the end of the day, you just need to be the best, right? Also, I would function better going into a race with multiple leaders. There would be a bit less pressure and I could be more free in the race instead of having seven guys looking after me all the time which can be stressful.

Still don´t know Le Tour…looking forward to it? Some say you´re a real cyclist once you´ve raced…
I’m really looking forward to the Tour. It’s funny, because in the US, most people would think I’m a hobby cyclist unless I tell them I’ve raced the Tour de France. Hopefully the Covid situation is resolved in time and the race can have the same enthusiasm, because especially for my first time, I’d love to experience the craziness and spectacle of the TdF.

There´s a lot of talking about 3 leaders or one. What´s your opinion about it? Remember what happened to Movistar…
I think the main difference is, at least from knowing Steven, Tom, and Primoz, there’s no big egos. Of course they all are ambitious and want to win, but in my opinion, they have a common interest rather than an internal competition and I think that brings out the best of them and the team around them.

How´s a normal day for you?
I usually start the day studying languages like Spanish (my girlfriend is Catalán, but speaks very good English, so she helps me. We are working up to the Catalán :) ) Then I will do my training, lunch, relax a bit and then we go on a short evening walk or for a drink. On easier days I’ll go on my mountain bike and then my girlfriend and I will usually try and go somewhere new for lunch and try and find the perfect chuleton or entrecot!!

Who was/is your idol?
My idols growing up were John Tomac, Ned Overend, and Todd Wells.

Is it difficult to be a part of a sport where we have doping stories all the time? any thoughts on 2016/17 samples that are being analyzed again?
It is difficult, especially when it feels like cycling is the scapegoat for every doping scandal. For almost every scandal that hits cycling, there’s also links to athletics, skiing, football, tennis, etc. It’s sad to see cycling stigmatized as a ‘dirty sport’ which ignores the proactive anti-doping measures and the generational changes that are taking place in the sport. As far as samples being re-analyzed, I think it’s a good idea because as anti doping technology improves, we can hopefully see who has tried to beat the system in the past.

Have you seen Movistar Movie? and Lance Armstrong´s?
The Movistar documentary was interesting. From what I could see in the show, there are some differences in how the team manages the individual riders, and how they approach the race strategy. They are a really successful team though, and all teams work differently, of course, so it was an interesting look behind the scenes.
I saw the first part of the Lance documentary. From what I could see, he had a winners mentality, but took it too far. Winning at all costs has a heavy price.

Do you work your TTs?Jumbo is a team that cares about it…
I do work on my TT, but not nearly as much as the other GC riders. The team knows that the TT will always be difficult for me, but they have still done aero testing with me each year and TT training. Another difference is as a support rider, I rarely do a TT at ‘race speed’ because I’m saving energy for the next day. This year and next I’d like to approach more TT’s as an actual race because I still need to improve the flow of a TT during a race- physically and mentally.

You´re young, almost new… how do you feel about former cyclists working on team staffs today? Isn´t it hypocrite to ban some people of cycling while others keep working on it?
I think those who cheated/doped in the past are still useful in the sport today; however, I have a problem with unrepentant dopers who are still involved in cycling. The sport needs dialogue about what mistakes were made and how to move forward. If you view the problem as only black and white and simply remove ex-dopers from team staff, organizations, etc. I think the viewpoints and understanding of the sport become a bit too ‘utopian.’ It’s a fine line though, because you need to make sure the ex-dopers are reformed enough to rejoin the sport.