We start with a sprint stage. 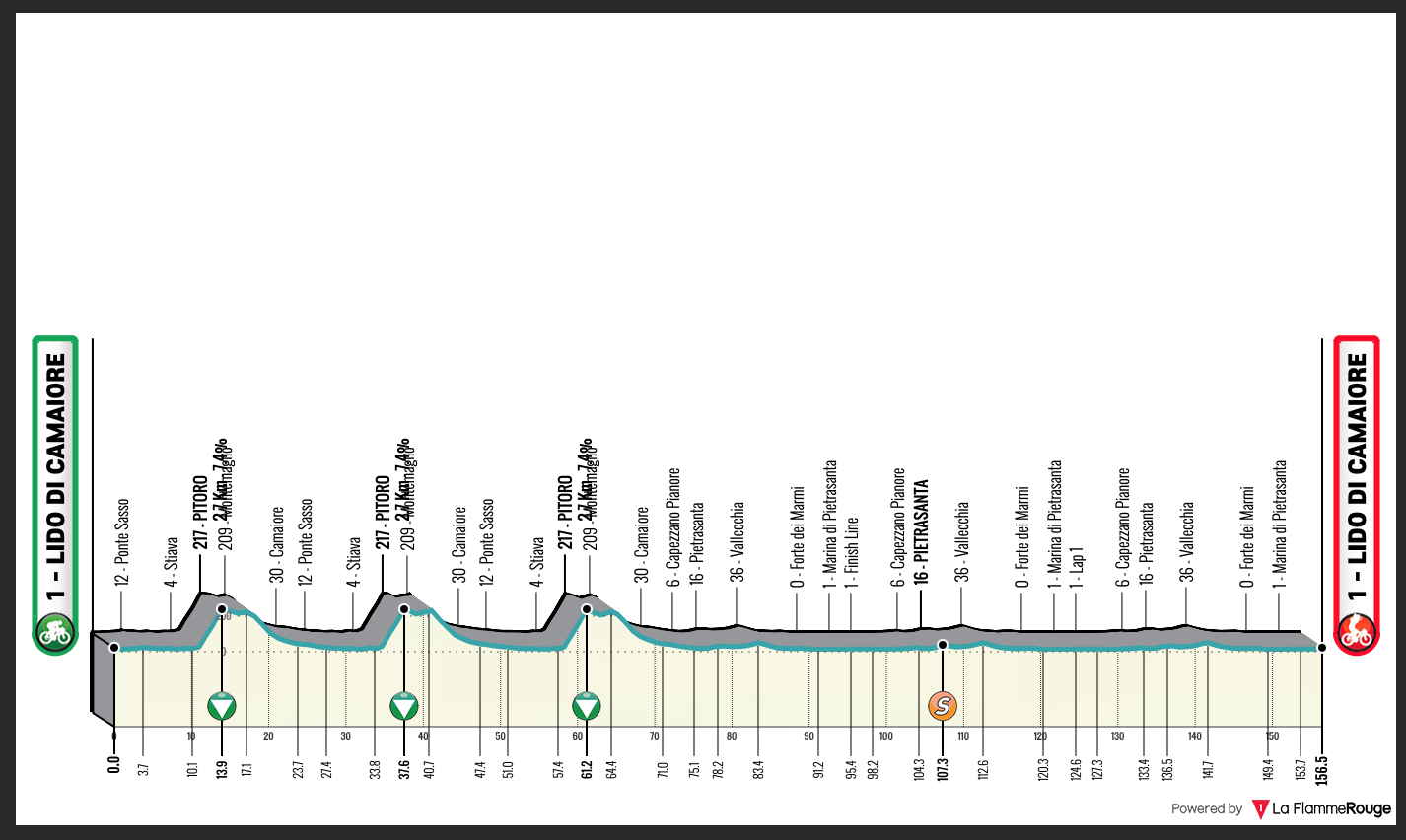 The organisers have tried to make life a little bit complicated for the pure fast men, they’ve decided to do three ascents of this little climb.

The climb is almost 3km at 7%, which certainly isn’t easy. It has quite a few steep pitches and also takes place on a narrow road which usually makes it seem worse for the fast men. The first time up comes after just 10km, it’s possible we could see some attackers trying to make it hard for the sprint teams to control, but it’s also likely we’ll see two sprint teams block the road and let a small break disappear up the road.

Some might look at the opening climb and think this is a day for the break, but I disagree. I would expect to see Lotto Soudal and Deceuninck – Quick Step come to the front in the opening kilometres and let everyone know what type of stage we’ll get. A small break featuring Androni and EOLO-Kometa will be allowed to get away and the rest of the day will be spent saving energy and waiting for the sprint.

The finishing straight is 8500m long, this is crazy. You might think this will lead to a safe sprint, but the opposite is actually true. We’ll see a huge fight for position, with teams getting to the front only to be washed away. This is known as the washing machine effect, something that makes it very hard for sprint trains to get it right in this finish. The trick is to remain near the front, without actually putting your nose in the wind, for most of the final 8km. To do this requires a huge amount of power, but also some wise heads in the train, there is no point hitting the front too early and wasting all your energy. Patience and power are the two attributes needed in this finish.

Caleb Ewan – after a slow start to the UAE Tour he ended it with a stage win, which was a welcome confidence boost. The Belgians arrive with their normal sprint train for Ewan, with Van Der Sande, Kluge and De Buyst looking to guide the Aussie into position. He starts this stage as the overwhelming favourite, he really is a class above the other sprinters in this race.

Tim Merlier – the man on form thanks to wins in Le Samyn and GP Monseré. The former Belgian champion can also count on the help of Rickaert and MVDP in the closing stages, which means he should be starting the sprint from a good position. His recent wins have been hugely convincing, but he knows he needs the perfect sprint to beat Ewan. If he manages to do so, it sends a big message to the other sprinters in the peloton.

Wout Van Aert – after a quite incredible 2020 I’m excited to see how fast Van Aert will be sprinting this year. Jumbo-Visma arrive with quite a few climbers to support his overall bid, but they also have the likes of Affini and Roosen to help him in the closing kilometres. The role of Affini could be crucial, he has the power required to hit the front in the final 2km and put Roosen and WVA into a great position. As he can do everything, it wouldn’t surprise me to see Wout challenging for the win.

Elia Viviani – heart surgery over the winter obviously had an impact on his preparations for this season, but he was surprisingly competitive in the UAE Tour. Last season was his first with Cofidis and it didn’t really go according to plan, as he didn’t register a single victory in the whole season. The Italian has never been one who finds positioning easy, but he no longer has the likes of Mørkøv to help rescue him from 20th wheel, which makes it very difficult to win races.

Fernando Gaviria – one of the problems Gaviria is now facing is a lack of support in sprint stages. In the UAE Tour he only had Richeze to help in the closing kilometres, at least for this race he’ll also have Oliveira. Given some of the sprint trains at this race it just isn’t good enough, Gaviria’s struggles will continue.

Álvaro Hodeg – at this point some might be shouting at their computer screen, but I think Quick Step will look towards their Colombian in this stage. They are one of the best teams in the world for many reasons, one of those is the faith and confidence they show in their riders. Hodeg is one of their main sprinters, the team continue to believe in him despite recent results not being up to standard. This confidence and faith is crucial when riders go through a poor run of form, it helps them to believe in what they’re doing. With Ballerini to put him into a good position, Hodeg will have a chance to silence his critics.

Given the level of sprinter it really has to be one for Caleb Ewan.