This is my idea of heaven. 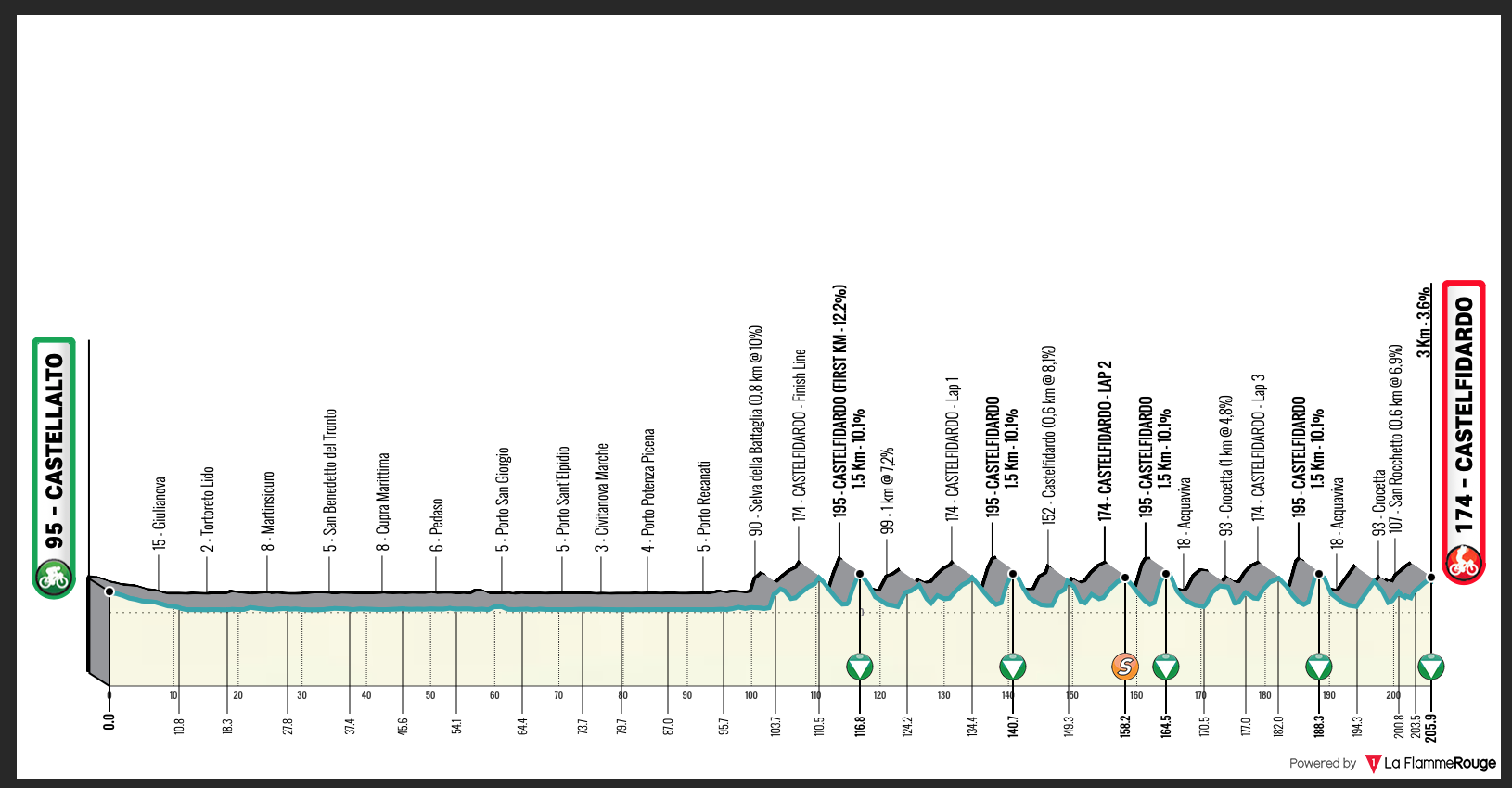 Every year the organisers of the race manage to find a stage exactly like this, I love it! The day begins with 100km along the sea, before we start the brutal lap circuit.

Cloudy, and very windy. At the start of the stage the wind is only 10km/h, but it will reach 30km/h by the end. It is coming from the south-west, which means a cross/tailwind for the long opening section beside the coast. Will we see echelons? Despite being beside the coast, the vast majority of the road is well protected from the elements. There are some small, exposed sections, mainly when the bunch head out of the little towns that populate the road, so teams will need to be switched on, but it will be tough to create gaps.

Most of the stage will be raced under grey clouds, and there is a threat of rain throughout the afternoon.

The riders take on a circuit of 24km on three occasions. The route is full of steep climbs, fast descents and some exposed sections.

By this point the wind will be coming from the west, and this part of the circuit is exposed. It’s not a long section, but it means that riders cannot use this to rest, it really is going to be full gas for the whole circuit.

The main climb is 1.3km at 9.6%, and it’s every bit as hard as the numbers suggest. The riders have to climb this four times, the final ascent comes with 17km to go.

The final 3km features three short ramps, and some narrow roads. It’s a great way to finish a stage like this.

Get ready for chaos! With Pogačar in the race lead UAE will come under pressure. Their team isn’t very strong and with 15 riders within 2 minutes of Pogačar this stage promises to be crazy. Most teams will throw the tactics book out the window and look to attack as often as they can.

Last year van der Poel won this type of stage from the morning break. It is one of those stages that could be taken by the first move of the day, but it can also be won with a move once the circuit begins. As always it depends on the attitude of the peloton, but I don’t see the morning move winning this year.

Mathieu van der Poel – while everyone else was smashing up a big mountain, van der Poel was taking it easy, which could be very important in this stage. The big climb is 1.3km at 9.6%, that is close to his limit, I would say. Last year he couldn’t cope with Poggio Murella, which is 1.6km at 10.8%. Despite his incredible strength, doing this climb on four occasions won’t be easy for him, especially if he stays in the GC group. I think we’ll see him attack early in the laps, as he isn’t a threat on GC UAE won’t be interested in chasing, that will help him get a good gap. Which teams have the strength to chase him down and set up a stage win? DQT and Ineos come to mind, but I think van der Poel will go long and take his chances.

Wout Van Aert – he rode a brilliant race today and now sits 35 seconds behind Pogačar. Van Aert is brilliant on his TT bike, but he will want the gap to be closer before the TT on Tuesday. We now have two stages where he will hope to collect bonus seconds and put Pogačar under some pressure. He will like the look of this stage, but just how much did today take out of him? As this is the first time he has tried to win a race like this, there is no guarantee Van Aert will be flying in this stage, it’s all a little unknown.

Egan Bernal – today didn’t go according to plan. Ineos will be keen on bouncing back, and Bernal has been looking good on steep climbs in recent races. This stage isn’t perfect for him, but he’ll still want to do much better than today.

Tadej Pogačar – doesn’t need to win, he just needs to follow wheels. His performance today was huge, he was incredibly strong. His good performance in Liège suggests he’ll cope fine with this type of stage, but I wonder how he’ll cope when isolated. For the first time I can remember, we’ll get to see how Pogačar responds when he is coming under pressure. You can bet lots of teams will be looking on with interest with some big races coming up in the future.

Simon Yates – that was some ride today, so what on earth happened to him on Thursday? I suspect Yates had a hunger flat, as he clearly has good legs. As he sits 1:59 behind Pogačar he isn’t a threat, which means he won’t necessary be chased when he attacks. This puts Yates into a strong position, and he does cope well with steep slopes, but not as well as Adam!

Tim Wellens – he looked strong on Thursday; this is a good stage for the Belgian. The repeated laps of the climb should mean we get to see him at his attacking best. He finished 2:05 down today, which was a good result considering the difficulty of the climb. Just like Yates, he could get some freedom from the GC group.

Is it too hard for van der Poel? I think it is, so I’ll take Simon Yates for the win.