After today’s excitement, time for something a little calmer. 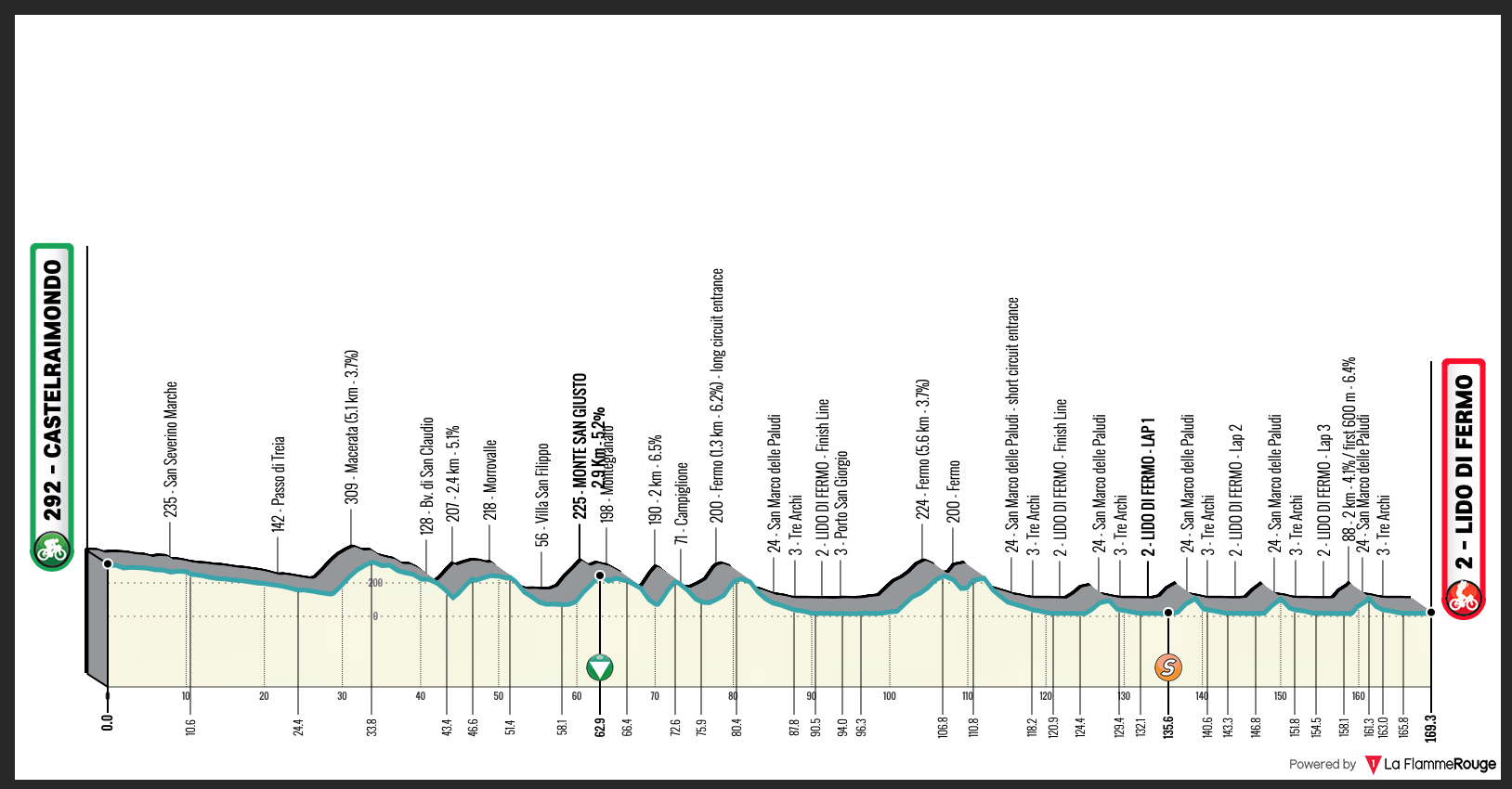 This should be a chance for the pure sprinters to see if they can beat Wout Van Aert. With 2400m of climbing, this isn’t an easy day, but it should still end in a sprint.

The race starts out in Castelraimondo before heading east towards the coast. There are a number of climbs along the way before the lap circuits begin. There is a big lap of 30.4k, before four smaller laps of 11.2km. The smaller lap contains one climb.

1.9km at 4.1%, which should be okay for the sprinters. The last ascent of the climb tops out with just 8km remaining, meaning that some riders will look to attack and see if they can hold off the charging bunch.

With 4km to go the bunch make this left turn. The bunch then move onto a wide road for just 400m.

Then they have to slim down to fit into the right-hand lane. Given how narrow the road is this is going to be an important point in the sprint battle.

Very soon after the peloton head through this tiny little tunnel, they then have 3.4km to go, nearly 3km of this is a nice straight road which will allow some sprinters a chance to move up the bunch.

With 500m to go the bunch take this left turn, the winner of the stage will be in the first five positions.

Straight after we have a right turn which leads onto a 400m long finishing straight.

Today was a tough day for everyone, thanks to the weather. Some teams will look at this and not be overly keen on chasing all day, so it could be a good day for the break. The composition of the group will be key, if it features a couple of the sprint teams it should stay away until the end. In reality, only DQT, Alpecin-Fenix and Cofidis have the power to chase all day.

Wout Van Aert – after going so deep today he’ll surely find his sprinting speed not as fast as the opening stage. Considering all the fast men could go easy today, I find it hard to believe that Van Aert will beat them in this sprint finish.

Álvaro Hodeg – we’ll have to see if DQT go for him or Ballerini, but I think they’ll continue to show faith in their Colombian fast man. It is likely that Hodeg will have the best lead out, he’ll be able to call on Asgreen, Alaphilippe, Štybar and Ballerini to guide him into position. Given the double corner in the final 500m, having the best lead out will go a long way to winning this stage. If he doesn’t take this chance, I’m not sure how many he’ll get in the coming months.

Elia Viviani – the opening stage didn’t go according to plan for him. Cofidis have an inconsistent sprint train, but they can sometimes get it right. He has the speed to win, but will he have the position?

Tim Merlier – another rider who was left disappointed in the opening stage. Merlier is one of the fastest in this bunch, but he needs a better lead out this time round. If van der Poel can time his surge well, Merlier has a real chance of getting to the front of the bunch for the double corner. If he gets that good position, he’ll be confident of taking the win.

Fernando Gaviria – 3rd in the opening stage was his best result this season. Gaviria is one of the best sprinters in the world, but UAE have a big focus on Pogačar, not sprinting. With Richeze and Oliveira he has a chance of getting into a good position, but it will require some luck. He’s another who could really do with a win.

Peter Sagan – clearly Sagan is still a fair bit away from top form, but I still want to include him in this section. He’s one of the best at getting a good position in a tricky finish, you can bet he’ll be at the head of the race inside the final kilometre. He doesn’t have the legs to win the stage, but I want to see him in the top 5.

The sprinters will have their day, the opening 30km is downhill which is great news for the bunch to ensure a small break gets away. None of the quick men really stand out, but I’ll go with Tim Merlier to take the win.