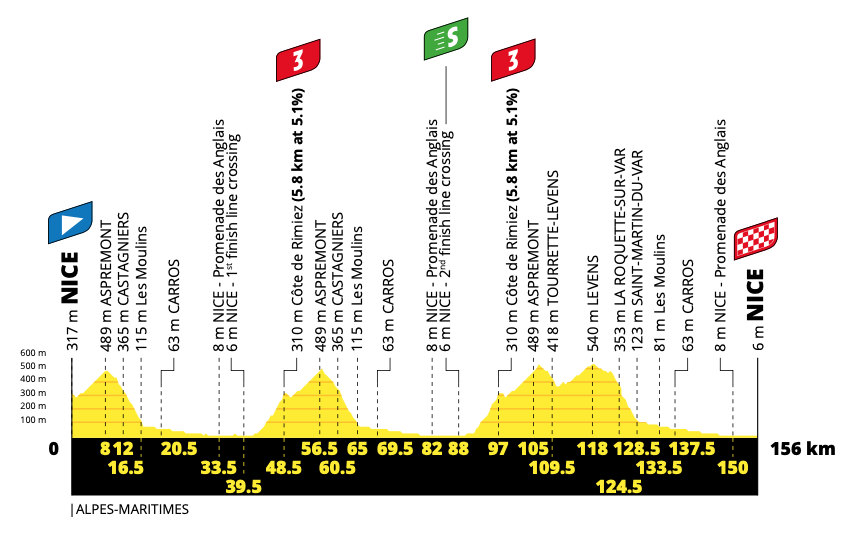 A lumpy looking opening stage, but one that is destined to still end in a sprint. The main obstacle for the sprinters is the cat 3 climb that has to be tackled on two occasions.

It depends on how you classify it, but it’s about 6km at 5%. It’s a steady effort and every sprinter worth their salt will get over it. Yes, the road continues to rise after this, but we’re only talking about 5.4km at 3.4%. Once over it for the second time we still have 50km until the finish, it’s too far from home for an attack to stick.

The final descent is relatively technical, but it can be easily controlled.

Lotto and QuickStep will control from the beginning, with help from NTT and Sunweb. Most of the opening 10km is uphill, but the gradient is shallow. Once a rider from B&B, Cofidis and Direct Energie get away the road is easy to block, and the peloton will rest. Despite the hills, I see this as a bog-standard sprint stage. 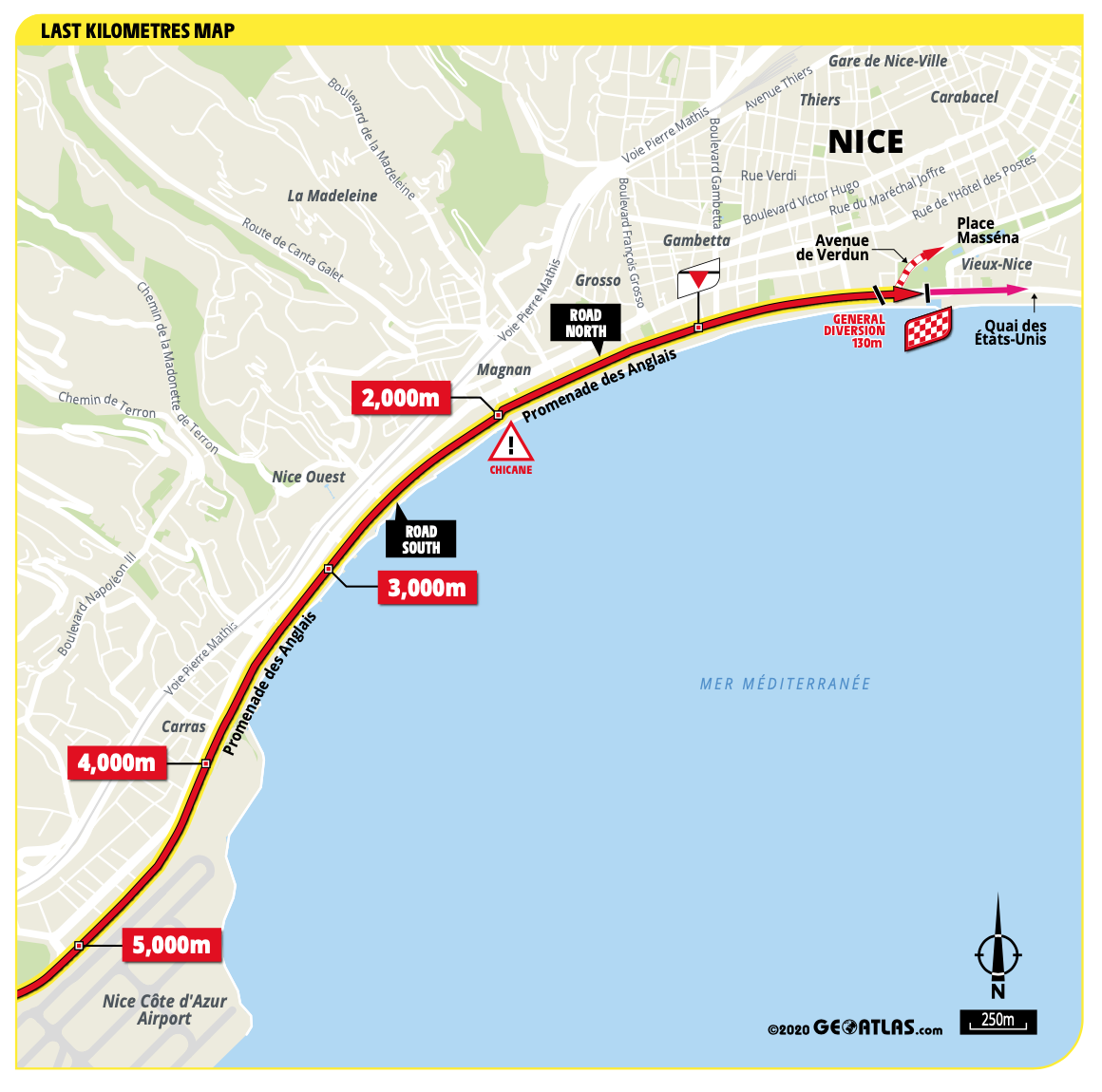 The easy finish isn’t ideal for sprint teams. Nerves will be up, and we’ll see the usual sight of inexperienced sprint trains getting to the front too early, only to be washed away. Experience is everything in this type of finish, you must have patience and a calm head.

There is a chance of a thunderstorm or two, fingers crossed they stay away. The wind is relatively gentle and is coming from the sea.

Caleb Ewan – the Monaco resident will be up for this one. He dominated the sprints last year, taking home three stage wins. This year he returns with a team built around him, it’s great to see Lotto committing to their fast man. Since the return to racing he was second in Milano-Torino and took a stage win in Tour de Wallonie, which was important as he beat Bennett. His sprint train looks like this: Gilbert, Kluge, Degenkolb and De Buyst. That is a train of the highest quality, easily the best in the race. It’s hard to imagine a scenario where Lotto aren’t in control in the closing stages, Ewan will be put into the best possible position for the sprint. Can he start where he left off?

Sam Bennett – another Monaco resident who’ll be motivated to take the yellow jersey in front of his family. The QuickStep train looks good, but there is an obvious missing piece at position number three. They have the big engines of Jungels, Asgreen and Cavagna but they are missing someone with speed at position three. When Štybar pulled out of the race they had an opportunity to correct this, I can’t believe Sénéchal wasn’t selected as the replacement. Without the injured Lampaert, and the non-selected Sénéchal and Archbold, they are missing a crucial link in the chain. They still have Mørkøv as the final man, but he might have to do the job of two men in the final kilometre. Bennett has struggled at times this season, but wins in Burgos and Wallonie will have helped with the confidence as he looks to claim his first ever Tour de France stage win.

Giacomo Nizzolo – the Italian is currently enjoying his best period as a professional cyclist. His wins in the Italian road race and European Championships were hugely impressive and he arrives full of confidence. The big problem with be his lead out train, it doesn’t look very good to me. The likes of EBH, Walscheid and Gibbons are good but not a patch on the riders from Lotto and QuickStep.

Cees Bol – this is a huge opportunity for the big man to take the white jersey, plus he has a decent shot at yellow. Regular readers will now of my admiration for Bol, he is a sensational sprinter who will continue to improve in the years to come. Sunweb made the bold move of omitting Sutterlin from their original squad, replacing him with Pedersen. This was to bolster the train and it does look much stronger thanks to this move. Without GC hopes, the team can commit every rider in the closing stages and look destined to secure a good spot for Bol in the final kilometre. It will then be over to his legs.

Wout Van Aert – currently the best rider in the world. His development over the last six months has been nothing short of sensational, that’s why he joined Jumbo-Visma. He knows that chances will be limited in the race, as he’ll be needed to work for his team leaders, but this will be one of his days. Not a pure sprinter, but he his fast enough to challenge for the win.

The battle of the Monaco pals, with Caleb Ewan getting off to a flyer.