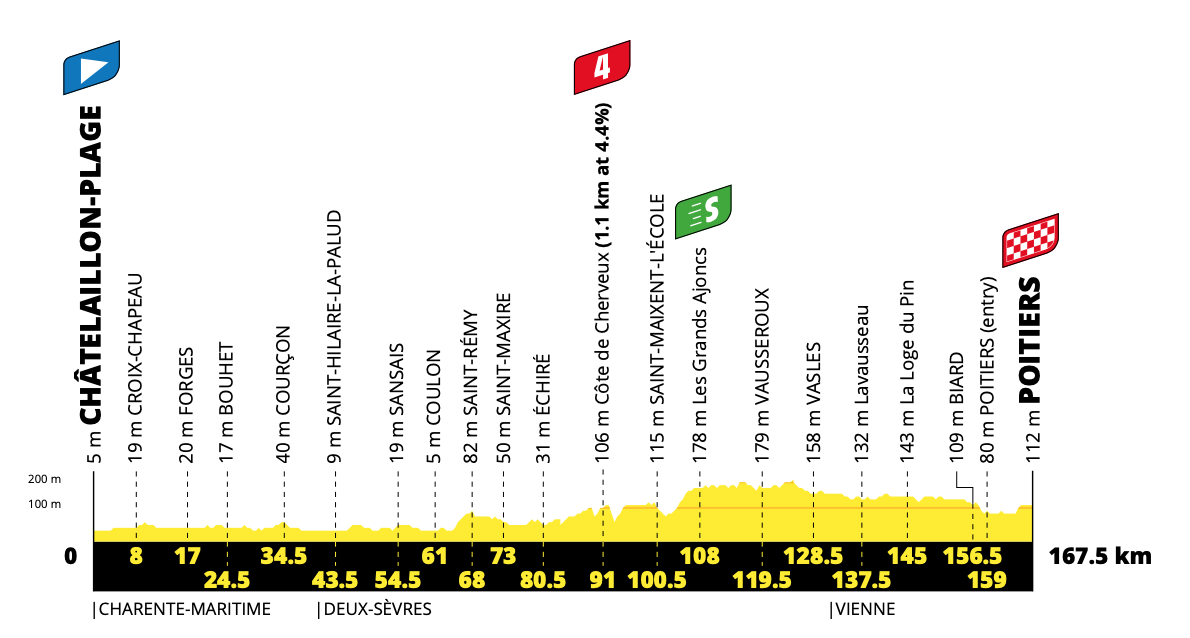 A flat stage without much to talk about, apart from the final 5km.

Sunny and hot, but with a pesky headwind for much of the day. Does anyone dare to go in the break?

Not overly technical, but that’s not the issue.

Coming with just 3km to go, the riders have to tackle this little kicker. 600m at 4.2% isn’t overly difficult, but coming not long after a sharp turn, the riders will feel the full 600m of the climb. There is a small section of false flat at the top, the climb doesn’t really top out until 2km to go. The sprinter teams will need to make sure the pace is very fast at this point to deter any attacks. The best team for this is Team Sunweb, just like they did back on stage 5. However, the climb is just about long enough for a daring attack at the crest, especially as it’s very close to home.

Another big turn comes with 1.5km to go, followed by a long straight up to the finishing line. Please note, the final 300m also kicks up at 3%, don’t go too early!

Sam Bennett – after taking his first Tour de France win, he’ll be on cloud nine. The perfect man to help guide him in the closing kilometres is Julian Alaphilippe, it’s a real luxury to have him in the sprint train. After nailing the lead out today, QuickStep will be confident of a repeat performance, which will put Bennett into a strong position in the green jersey classification. You cannot underestimate how important confidence is for a sprinter, and Bennett now has lots!

Caleb Ewan – did very well today to finish second, it’s hard to win when Mørkøv delivers his man to the 150m mark. Lotto’s approach was to put Ewan into a good position in the closing kilometres and let him fend for himself. The little Aussie is very good at this, but it’s a risky strategy. The problem for them is their lack of support riders, winning another stage in the race will take good legs and even better luck.

Cees Bol – think back to stage 5, Sunweb were immense in the hilly finale. With riders like Hirschi, Benoot and Kragh Andersen they have the power to smash to the front and put Bol into a great position. Today wasn’t great from the team, they ended up hitting the front, but left Bol behind. It seemed that he was trying to communicate to his team, but they didn’t get the message. Making mistakes is all part of the learning process, they will approach this stage with extra motivation. This is brilliant chance for the Dutchman to take his first Tour de France stage win.

Wout Van Aert – this is a great finish for him, but will he sprint?

Peter Sagan – third today, his form seems to be growing. After starting the race undercooked, it’s good to see Sagan coming back into form. This is a good finish for him, but he would prefer it to be even harder. Sagan will start the sprint from a good position, but finishing better than third will be difficult.

This is a tough one, as Bennett will be hard to beat, but I’ll take a risk. Sunweb have the longest sprint train, this is a finish where they can use that to their advantage. I see Cees Bol taking a huge win.