Too hard for the sprinters, not hard enough for the GC riders. Do you remember what Thomas De Gendt once told me? 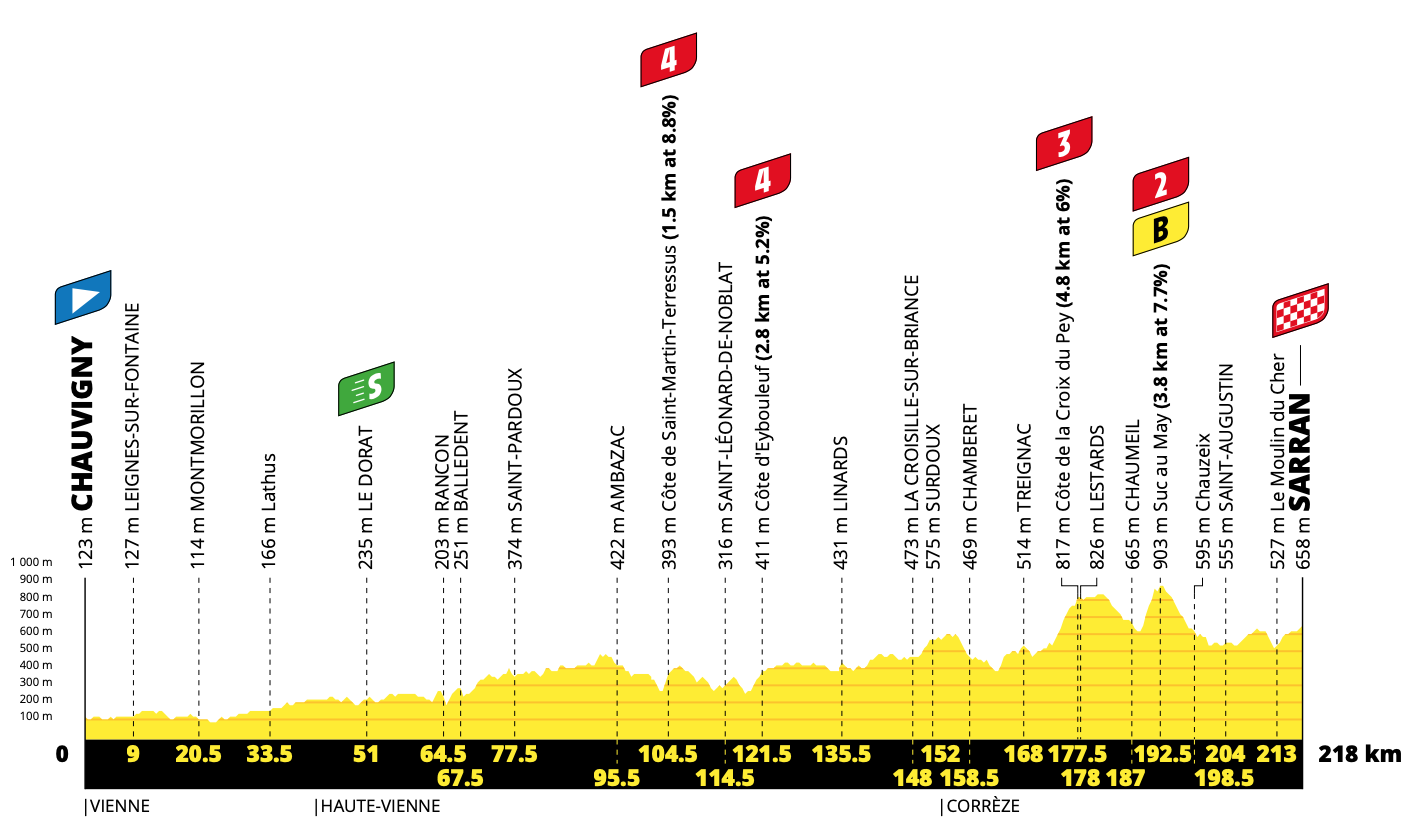 That’s right, it’s a day that all the breakaway riders will have marked in red.

The cat 3 ascent, Côte de la Croix du Pey is the start of the proper climbing. It’s 3.8km at 6.1%, but it’s a steady effort. This is the starter, with the main course coming straight after.

Suc au May is classified as 3.8km at 7.7%, but I prefer to say 2.6km at 9.5%. This is a steep and demanding climb. Cresting with around 25km to go means it’s a long way from home, which usually means a small group will arrive at the finish together.

The final 5km is a grind up to the finish, on a narrow road.

We do have a cross/tailwind for most of the stage, but I don’t think the wind is strong enough for echelons, but it will certainly add a little spice to the start as this section is very exposed.

Do Bora want to try and control the stage in the hope Sagan survives the climb? I doubt it, but there is a small chance. The most likely scenario is we see a monumental fight for the breakaway, once it gets established it won’t be seen again. The GC teams will be happy for a relatively easy stage, the final climb is too far from home to see any serious attacks, especially now Fabio Aru is no longer here.

As we all know, making this type of breakaway is very complicated. You either need amazing timing, good luck, brilliant legs, or a combination of all three. As the crest of the final climb comes with over 20km, it usually favours those with a fast finish. No, not your pure sprinters, but those rouleurs who pack a big punch.

QuickStep – so many options, the break must have a member of the wolf pack. Of their eight riders, only Bennett and Mørkøv have no chance. The rest of the pack will all be sniffing a chance of taking a stage win. Alaphilippe is the obvious candidate, but Cavagna and Asgreen have huge engines and love attacking. The final climb is wonderful for the Frenchman, but there is no guarantee he makes the move. I repeat, the break will have QuickStep presence.

Astana – another super strong team who should allow their domestiques to chase personal glory. Fraile, Lutsenko, LL Sanchez and Gorka Izagirre are all great options for the stage. Lutsenko already has a win, but that doesn’t mean he won’t get another. That day he climbed like a dream, and he also packs a fine sprint, he should be their top option. The big problem will be making the break.

CCC – they have two amazing options for this one: Trentin and Van Avermaet. This stage does remind me of the one Trentin won last year, although that day the final climb was easier than this one. Both of these guys have a huge amount of quality, know what it takes to make a break, and can finish it off when they get there. Their other options are De Marchi and Geschke. Both riders have been surprisingly quiet in this race. I think they’d prefer GVA or Trentin in the move.

Sunweb – another team with huge options for this stage. Benoot, Arndt, Kragh Andersen and Hirschi are all excellent cards to play in this stage. Hirschi’s performance on Sunday is one of the best in living memory, if he makes the break I can see him going solo on the final climb, even though it’s a long way from home. Tiesj has been a little quiet in the race, but he did crash in a breakaway in the opening week. Arndt is a very classy rider; he’d love to join the ‘Wins in all 3 grand tours’ club. With so many options, they must be involved in the move.

Jonathan Castroviejo – I know, I always tell people to never pick Ineos domestiques for breakaways, but the times are a changing! Castroviejo is in the climbing form of his life; it also helps to have a huge engine as the fight for the move will be fierce.

Max Schachmann – his form seems to be growing, remember he was hit by a car in Il Lombardia. On paper, this is a perfect stage for him. He’s one of the best on steep climbs and has a very fast sprint.

Oli Naesen – come on Oli, get in the move. He’s been a little quiet in this race, but he’ll sense this is a big opportunity to win his first Tour de France stage. AG2R are enjoying a good race, with a stage win, the KOM jersey and Bardet riding high on GC. With confidence high, expect to see them in the move.

Pello Bilbao – the classy Basque climber won two stages in the 2019 Giro, he’s a rider who knows how to win big. On Sunday he seemed to have an interest in making the breakaway, which gives me hope for this stage. He has the climbing legs required to cope with the hill, and he’ll like the look of the uphill sprint.

Dani Martinez – brilliant at the Dauphiné, but came crashing back down to earth way back on stage 2. The Colombian took a few days to recover from his injuries, but he now seems back up to speed. If he makes the break, EF will be confident of success.

Daryl Impey – won a similar looking stage last year, he has to be one of the men to watch. The South African’s time at Mitchelton-Scott is coming to an end, he’d love to sign off with another big win. Like all the riders I’ve mentioned, he’ll be a big threat if he makes the break.

Jasper Stuyven – the Belgian has been very close to winning a Tour stage from the break on a few occasions, can he land a big one? You would think the climb was too hard for him, but it all depends on who else makes the break. If he’s in the move with some climbers, he won’t wait for the climb, he’ll try and hit them early.

I think I’ll favour a rider from one of the big teams, as they have multiple options. With the power of QuickStep behind him I have to go for Julian Alaphilippe.