Welcome to the Massif Central. 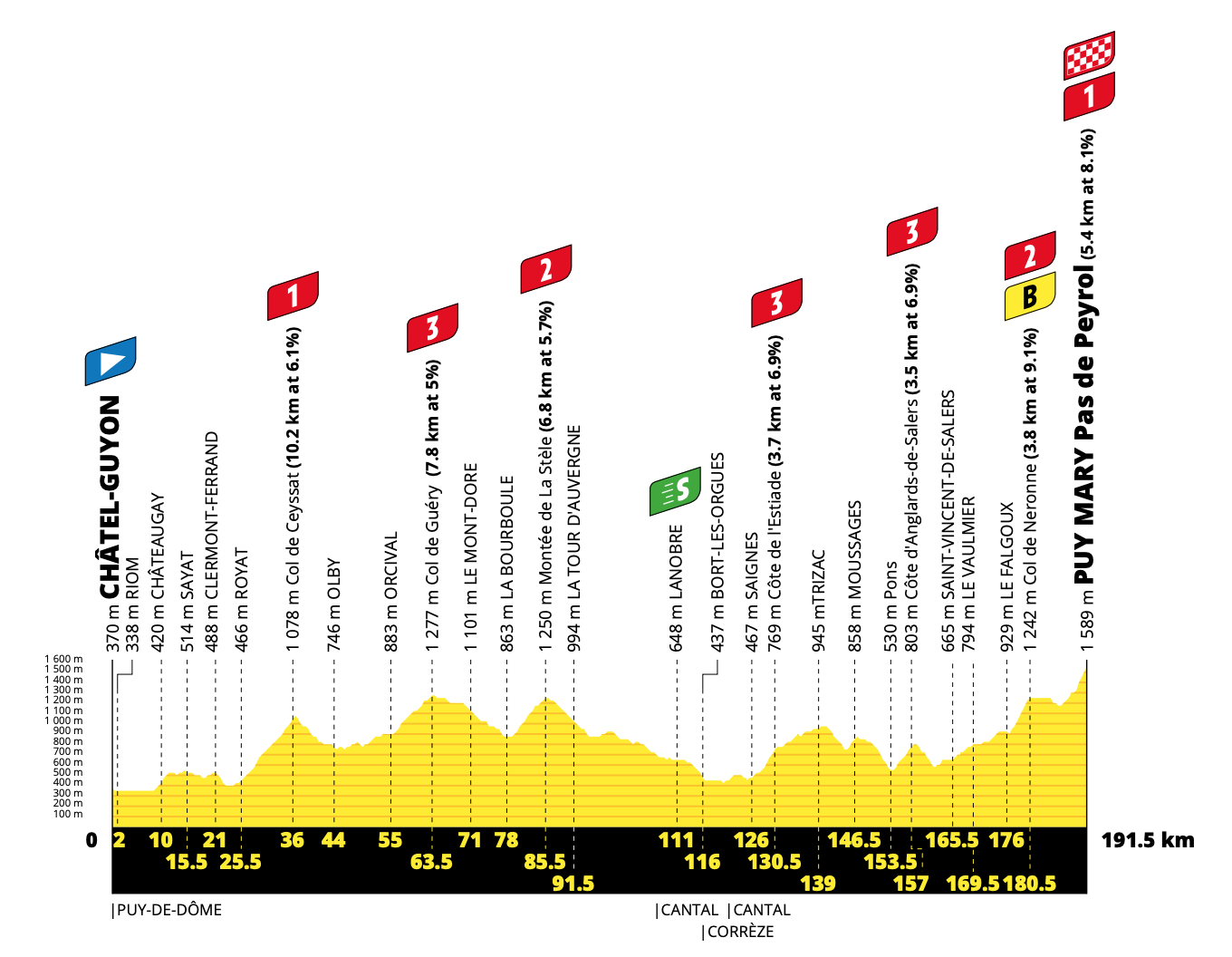 This is going to be one hell of a stage, just take a look at the climbs.

An early cat 1 climb is always good news for the breakaway, and this one comes after just 25km. 8.1km at 6.4% isn’t the hardest of cat 1 climbs, but it is tough enough for the climbers to ensure they make the break. This is the first time all the climbers will be looking to make the move.

Col de Neronne is a horrible looking climb, 3.8km at 9.8%. The organisers are having a laugh calling it a cat 2. It crests with 10km to go, but it’s the hardest climb of the day in my book.

The finish is 5.4km at 8.1%, another tough one for the riders. It might not be overly long, but just look at the final 2km which averages 12.8%, it is brutal. Expect to see some big gaps between the favourites.

Not as warm as previous days, and there is a risk of rain in the afternoon.

Being a summit finish usually means less chance of a breakaway win, but not always. With many tired bodies in the bunch, and a big weekend to come, I’m not sure many teams will have the will to chase down the morning move. The breakaway’s chances will be decided by Jumbo-Visma. As the vast majority of the peloton are way down on GC, I’ve got to think that they’ll be happy to have an easy day controlling the bunch, before a big finish. I don’t see the point in them driving their domestiques into the ground, this race still has a lot of hard stages ahead.

Will any other team take up the chase? UAE would be the most likely squad, but do they have the team to do so? As they only have five riders to support Pogačar it is highly unlikely they’ll be able to control the break.

What about Ineos? Bernal is sitting in second place, just 21 seconds behind Roglič. Ineos do have the squad required to control the break, but I’m not sure they’ll do this. Why would they risk only having a few riders left for the finale?

Do any of the GC riders have the balls to attack on the Neronne? This is a climb where domestiques don’t really mean too much, a big attack can put them into trouble and force Roglič out to play. The only man who seems capable of doing this is Pogačar, but does he have the legs to put Roglič into difficulty? The Slovenians seem the best in the bunch, we could see the two of them disappear into the distance. Remember, these guys are good friends, they will work together.

The other option is to wait in the wheels for the final 2km of the stage. This is steep enough for someone on a very good day to put considerable time into their rivals. Will Bernal be able to find his 2019 form?

Primož Roglič – the man in the yellow jersey, the one they all have to beat. Roglič hasn’t put a foot wrong in the twelve stages so far, he’s looked very easy. Jumbo-Visma have the strongest team in the race, and after a few days off for their domestiques, they should be back to their very best for this stage. Sepp Kuss in particularly should love this finish, he is brilliant on steep slopes. As a former winner of the Tour of the Basque Country, you know that Roglič loves steep slopes too, but Adam Yates did find a little weakness in last year’s Tirreno Adriatico. Roglič will sense a big opportunity to put time into his rivals and take a commanding lead of this race.

Tadej Pogačar – the young pretender is looking in fine form, and I think we all love his attacking style. He’ll be determined to continue his climb up the standings, it really was a shame he lost time in the crosswinds. Being willing to work with Roglič could well work in his favour, but there will be no gifts at the end of the stage.

Egan Bernal – time to see what he’s got. He started the race still complaining about a sore back, and has ridden conservatively in the opening twelve stages, now is the time to see what his current level is like. If he is back to his level from last year, we’ll be in for one of the best Tours in recent history. When at 100%, the final climb would be great for him, hopefully he is.

Mikel Landa – a rider who tends to improve the longer the race goes on. He loves steep slopes and was looking impressive on Sunday. For years, cycling fans have been longing to see Landa at his very best in this race. If he can win this stage it puts him right in the fight for yellow, and he’ll also break twitter!

Dani Martinez – a crash on Col d’Èze ruined his GC chances, but his form seems to be improving. After winning the Dauphiné, I’m sure he’ll be disappointed to have not been able to fight for GC, but he now has freedom to chase stage wins. The Colombian is a wonderful climber, this is a great stage for him.

David Gaudu – came into the race supporting Pinot, but now has freedom. His crash in the opening stage left him with a sore lower back, but he now seems in better spirits. Gaudu is a sensational climber, one of the very best in the peloton. If he is feeling good, he’ll be a hard man to beat.

Alexey Lutsenko – with a stage win in the bank, he can ride without pressure. Lutsenko is a wonderful racer, he sniffs out opportunities and converts them. His role in the team will be interesting, as Ion Izagirre leaves a hole that must be filled. The Basque rider was the last man supporting López in the last mountain stage. Will they ask Lutsenko to sacrifice his own personal chances? We’ll have to wait and see.

Marc Hirschi – it was great to see him getting a well-deserved win today, it makes up for Sunday. He could well be tired, but given his current form I wouldn’t bank on it. Sunweb will now be full of confidence and they’ve been hugely impressive since the race began in Nice.

I’m feeling a lot of love for the break, as I can’t see any team wanting to chase them down. Looking at the contenders, I’ll go with Dani Martinez, he’s a rider that impresses me.