After a day off, the GC riders are back in action. We’d normally have huge crowds on the road for this one, but with a worsening Covid crisis in this part of France, there won’t be any fans on the climbs. 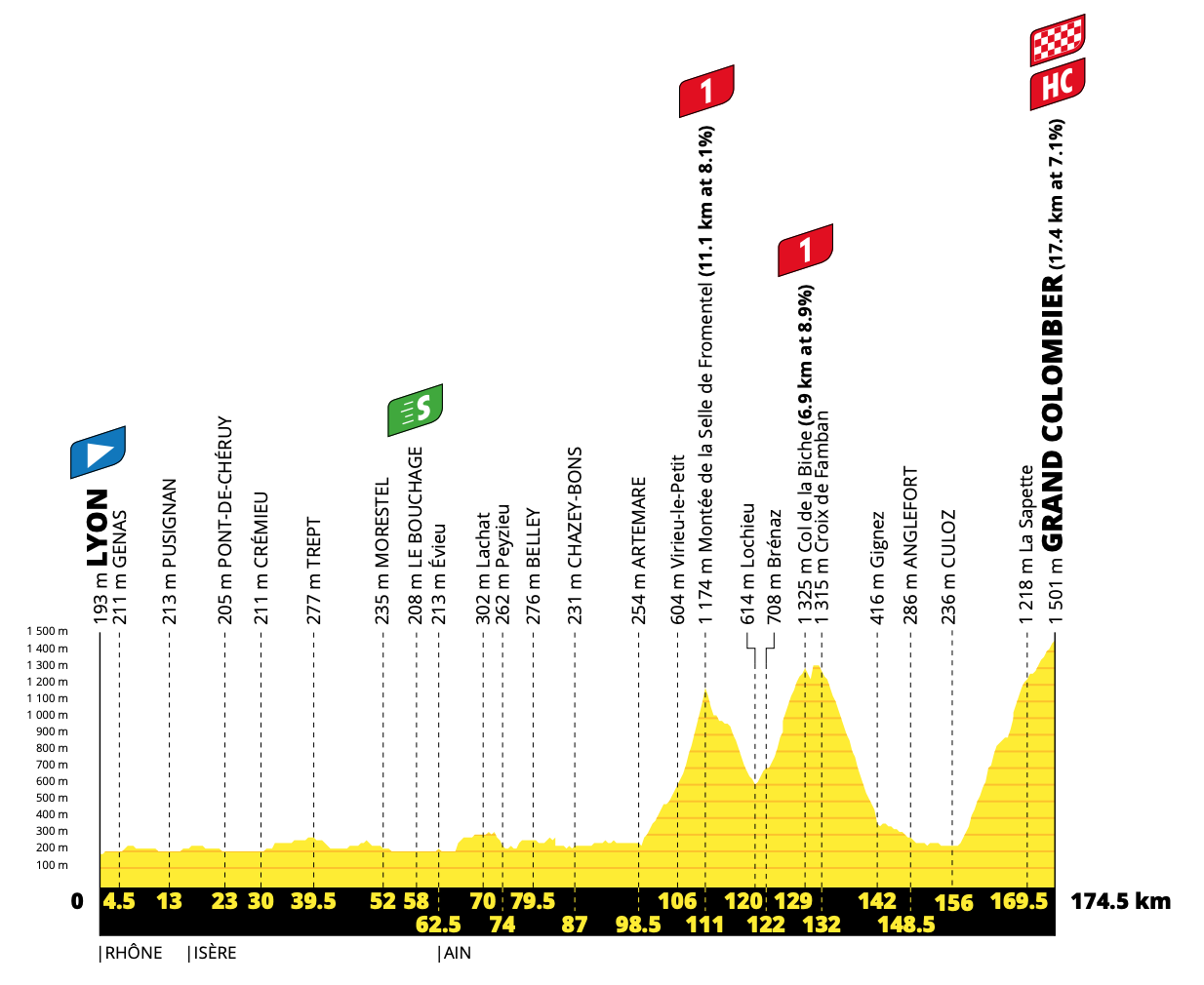 Not only is this a big day in the fight for yellow, but also the polka dot jersey. The break will definitely take the points on the cat 1 climbs, but we’ll have to wait and see about the Grand Colombier.

Fromentel is a tough climb, especially the final 4km which averages over 12%. A short descent follows before the road kicks up again.

Col de la Biche is a brut of a climb. It’s very steep and hugely inconsistent, something most riders don’t like. There’s a long way to go from the crest, but we could still see attacks from the GC group.

The descent isn’t overly technical, but it is very fast. Once off the descent, there’s only 14km of flat leading into the Grand Colombier.

Not the hardest looking climb in the world, but the length makes it super difficult. Coming at the end of a demanding stage, we could see some gaps on GC.

Another beautiful day for a bike race.

The final stage of the Tour de l’Ain was almost exactly the same as this. It means that both Jumbo-Visma and Ineos know exactly what’s to come. The cat 1 climbs are both incredibly difficult, and with the three climbs all close together it is possible to go for a long one.

Ineos tried to dominate Friday’s stage, but Bernal came up short. Will they try again? It would seem a little foolish as Bernal is clearly not as strong as they would like. As usual the responsibility to control the race will lie with Jumbo-Visma. How hard will they want to make the cat 1s? As Roglič has a firm grip of the race, there really isn’t any need for them to do anything silly. I think the team will be happy to ride at a solid tempo, but holding back a number of key domestiques for the Grand Colombier. Once there, they can start to ramp up the pace as they head up the climb. Roglič won here back in the Tour de l’Ain, he’ll be confident of doing it again.

Yet again, the attackers will have a great chance of winning the stage. The opening 100km of the stage is pan flat, which is normally a disaster for the climbers who want to make the move. The good news is that by this time of the Tour de France, it is possible for climbers to get in these moves, but with the help of a few teammates. To win this stage you must be a good climber, the makeup of the break will be crucial and will go a long way to decide if it stays away.

Marc Hirschi – he’s properly gone for it in three stages and ended up on the podium each time. His current level is ridiculously high, and he has a team who are well drilled in how to help him. His third place on stage 9 was heart-breaking, but he made up for it on Thursday. Given the steepness of the climbs, Hirschi will be the man to beat if he makes the break, it really does help being small and light.

Dani Martinez – won on Friday, he could do it again.

David Gaudu – another who’ll like the sound of the climbs, but does he have the form? The answer to that question has to be no, but this is a three-week race, and some can ride into form. FDJ will hope this is the case, as the race has been a disaster for them.

Julian Alaphilippe – another who’ll be hoping his form improves with every stage. Yes, he’s not at his best, but that doesn’t mean he won’t get there. I love Julian’s spirit; you can bet he’ll keep trying until he takes another win.

Marc Soler – after a horrible run, it’s good to see him getting back to his best. The Spaniard is a brilliant climber, his form is certainly improving, and you know that Movistar will want to be in the break for the team classification.

Esteban Chaves – the little Colombian would love to land a stage win. He tried to get in Friday’s move, but left it too late and his chance was gone. Mitchelton-Scott have a couple of big guys who can help Chaves make the morning move, something they have done well for many years.

Pierre Rolland – another rider who’s been present in recent breakaways. I do worry that he doesn’t have the legs to finish off these chances.

Primož Roglič – if it comes back together he’ll be the big favourite. He waited for the sprint in the Tour de l’Ain, but he might fancy attacking and trying to drop his rivals in the closing kilometres. Roglič hasn’t put a foot wrong in the race, it must be soul destroying for his rivals.

Tadej Pogačar – the only one who seems able to follow Roglič. He has the speed to beat Roglič is a flat sprint, but I don’t think he can beat him in an uphill one.

Yet again, I see this as a day for the breakaway. The opening will be fast and furious, especially if Sagan tries to get in the move for sprint points. When the dust settles I think Marc Hirschi will take another stage win. Back in the GC group, I think Roglič could take a few seconds on his rivals, but not much.