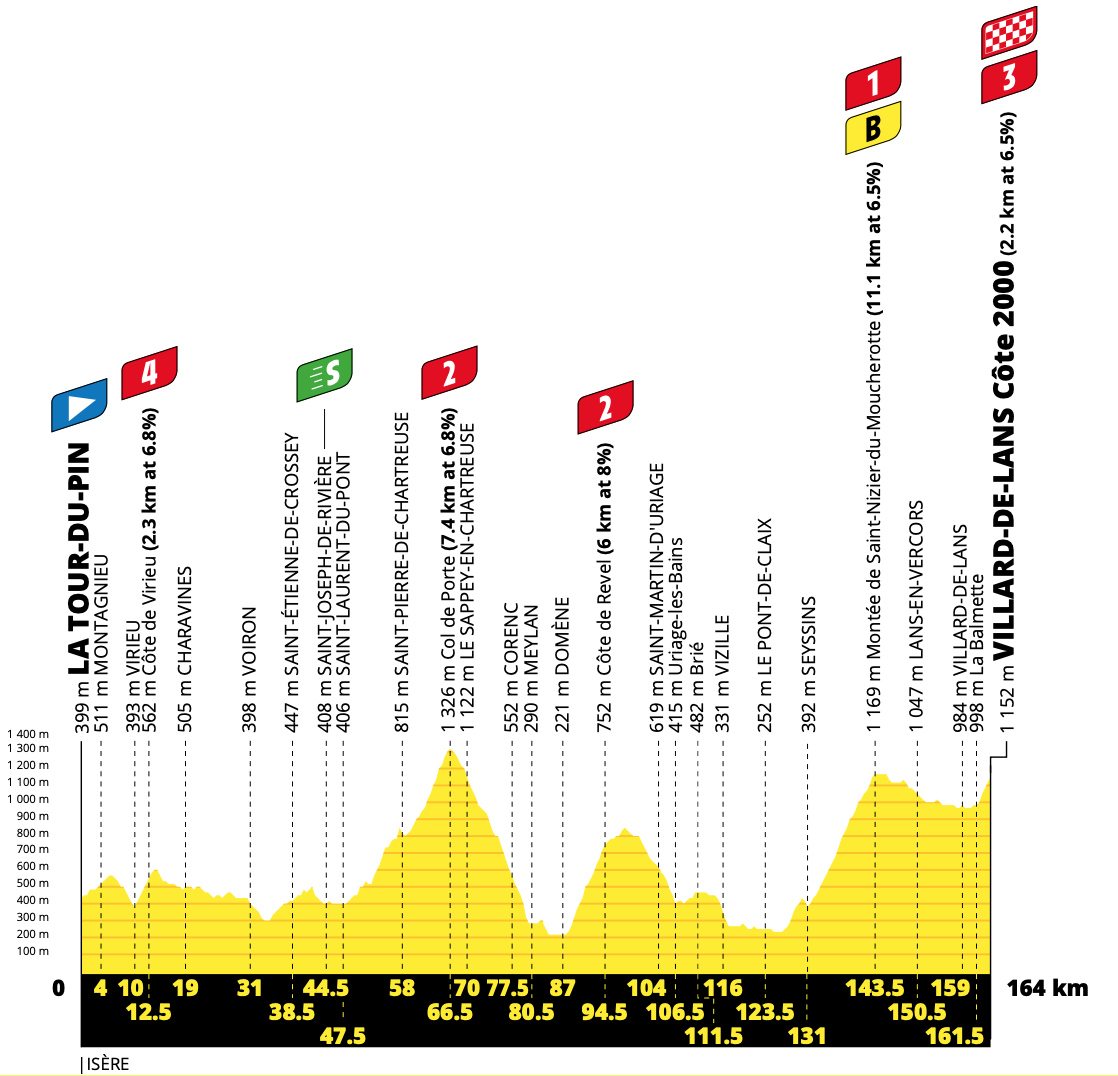 A day that isn’t hard enough for the GC riders, that means it’s another great day to get in the morning break, but how long will it take for the move to form? The opening 13km features some narrow roads, but also a couple of little kickers to help the attackers. We then have 20km of descending before the road kicks up again, at around 3% for 6km. Crucially, the intermediate sprint comes not long after this climb, which will certainly have the interest of Peter Sagan.

After around 52km the proper climbing begins, with the Col de Porte.

Officially it’s 7.4km at 6.8%, but you could also say it was 15km at 5.2%. Nobody knows if the break will already be formed by this point, but it does give the climbers a hope of bridging over to the front group if the move goes on the flat.

Côte de Revel is up next, it’s 6km at 8%, which makes it quite a tough climb. After this crests the riders will have approximately 60km of descending and flat roads, this is the boring bit of the stage.

The main climb of the day is the cat 1 ascent of a mountain which is far too long for me to name! It is 11.1km at 6.5% and crests with 20km still remaining, this is why it won’t be a GC day. After a long descent, the road kicks up for the final 2km.

2.2km at 7% is a nice finish, the hardest section is at the start. Will we see a sprint from a small group?

It should be another nice day for the bunch, but I did see one forecast that mentioned the chance of some rain in the afternoon.

Sunweb – two wins in the last four stages has been a great return for the team. For a stage like this I think that they have four clear options: Hirschi, Benoot, Kragh Andersen and Roche. They will use their big engines to help at the beginning of the stage, and as we’ve seen in previous days, they’ll want multiple riders in the front group. Hirschi looks the best option for this stage, but if the group is as large as I think it might be, there is no guarantee he’ll up end as their main man. Having multiple riders will give the team options, this will give them an advantage over most teams.

Ineos – now that Bernal is out of the GC picture, it frees up their riders to attack. Kwiatkowski, Carapaz, Amador, Castroviejo, Sivakov and Van Baarle will all fancy their chances in this type of stage, but it will all depends on who makes the move. It’s hard to imagine the break going without Ineos riders present.

Bora – another team with multiple options, I think Schachmann and Kämna are their best. Schachmann seems to be growing in form, which is positive for the week ahead. Kämna is also looking in fine form, and this type of stage is very good for him. We’ll have to see how Bora approach the stage, as they’ll want to help Sagan take the intermediate sprint.

FDJ – Pinot, Gaudu, Madouas, Molard and Reichenbach give the French squad options, but are they good enough to take the stage? The opening day crash put a real damper on things for FDJ, and they’ve struggled to recover since. The best of their bunch has been Reichenbach, but he’ll struggle to win this type of finish.

Julian Alaphilippe – this is a perfect stage for him, the mountains aren’t too hard. Yes, his form isn’t where he would like it to be, but I think he’ll improve as this week goes on. If he gets in the break, he’ll be a hard man to beat.

Dani Martinez – already one stage win in the bag, the Colombian will be trying for a second this week. In theory, this stage isn’t hard enough for him, but when you have good legs you don’t mind!

Pello Bilbao – climbed very well on Sunday, and this is a finish that suits him well. The Basque climber oozes class, he already has two Giro wins to his name, it would be great to see him add a Tour win to his collection.

If a team has multiple riders in the front group they will hold the upper hand, especially with the long gap between the cat 1 climb and the finish. Sunweb have been hugely impressive and I think they’ll take another win, this time with Tiesj Benoot.