A huge day in the battle for the yellow jersey. 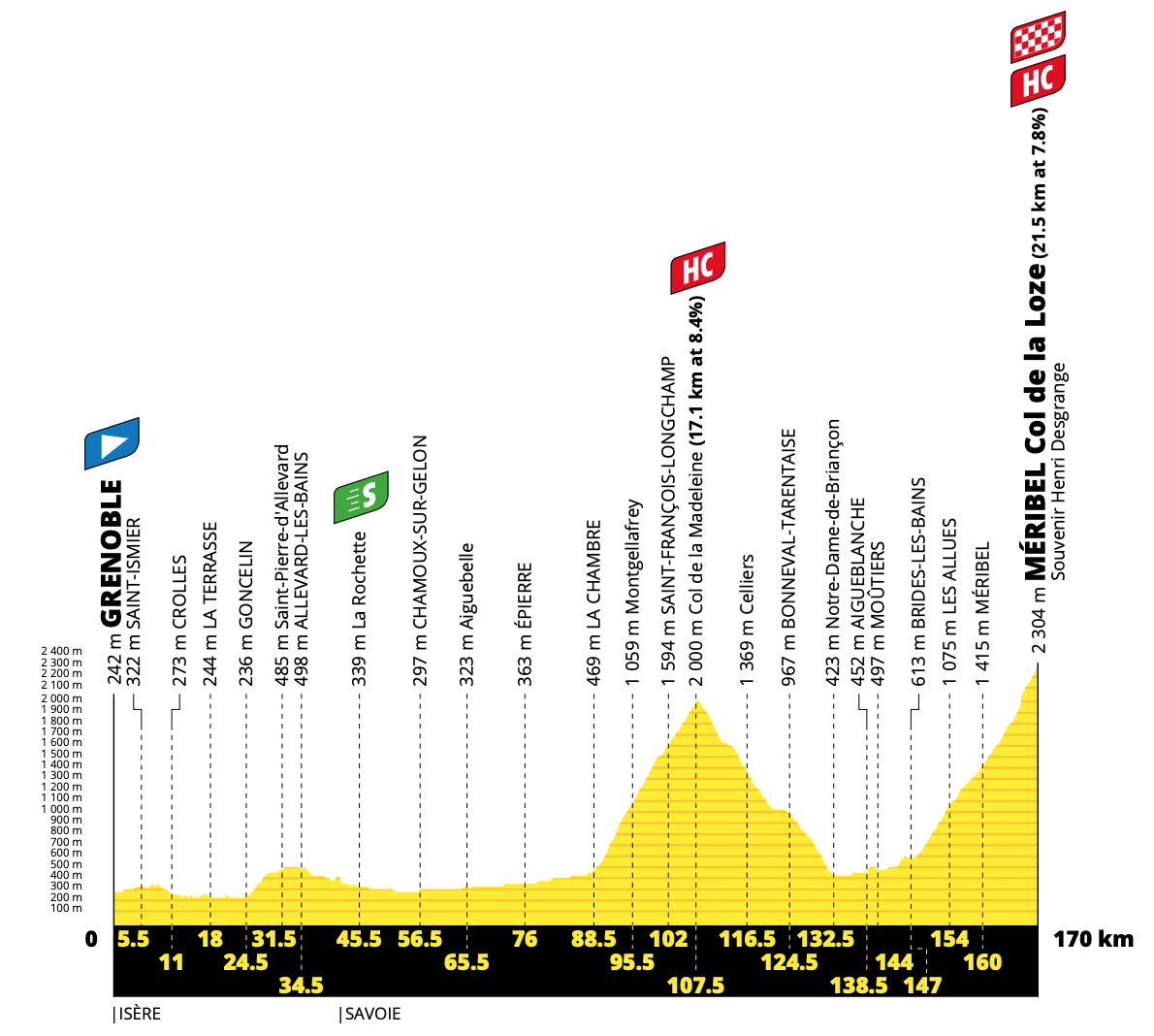 This is the stage that we’ve all been eagerly awaiting, with the brand-new climb of Col de la Loze, but there’s a big obstacle before we get there.

In any normal stage the Madeleine would be the main event, as it’s 17.1km at 8.4%. This is a hugely demanding climb and with 20 KOM points on offer a very important point in the battle for the KOM jersey.

The descent is narrow, fast and relatively technical. Lasting for around 25km it’s a long one, and leads into 15km of flat heading towards the main event.

This is the highest point in the race, and with it comes a whopping 40 KOM points, it will have a large say in who wins the polka dot jersey. The climb is a on a cycle path, not a road, which adds to the mystique. The organisers have classified it as 22.2km at 7.6%, but it’s the final 5km that will do the damage. In this section the gradient is almost always over 10%, having almost 5km at 10% to finish this day off is going to be incredibly difficult for most riders, you can guarantee big gaps on GC.

There is a real possibility of a huge thunderstorm in the afternoon, but these things can be hard to predict. The wind is also predicted to strengthen as the day goes on, it will likely be a headwind on the Madeleine and for the final kilometres of Col de la Loze. If the Madeleine descent is wet, it will be carnage.

50/50. Such a big summit finish usually ends with the GC riders fighting for the stage, but this isn’t guaranteed. In the favour of the GC riders is the easy opening 80km, it would be fairly easy to control the lead if a smallish break escapes. If a big move gets up the road, I don’t think it will come back. Jumbo-Visma will also be a little concerned about the finishing speed of Pogačar, if he wants the 10 bonus seconds, his team will need to chase. With only five riders left to support their leader, UAE don’t really have the team to do this.

The other option for GC teams is to try and get a satellite rider up the road, which will allow the team leader to attack on the Madeleine. This is a high-risk strategy, one that I doubt we’ll see any team employ.

The bad news for the break is the flat start. To win this stage you have to be a good climber, otherwise you’ll need a monumental gap for the final climb. Getting climbers into this move certainly won’t be easy, but as I’ve mentioned before it is still possible. Clever teams will use their power houses to try and establish the move, with their climber hiding in the slipstream. The success of the break will be determined by the size, and quality, of the move.

Can anyone upset Jumbo-Visma? The simple answer is no, they are far too strong. The other teams are not strong enough to put Dumoulin and Kuss into difficulty, there is no point in attacking and wasting valuable energy. In terms of the GC battle, this stage will come down to the last 3km, this is when a rider like Pogačar will make his move. We’ll have to see if he can put time into Roglič.

Primoz Roglič – he made his first mistake on Sunday, attacking with 600m to go wasn’t the right thing to do. Okay, this was hardly a massive error, it was simply Roglič getting a little excited, it’s nothing to really worry about. This finish is very similar to something you would see at the Vuelta, a race that he won last year. The Slovenian is incredibly strong when the gradient goes over 10%, he has the seated power required to put the others into difficulty. If he gets through this stage without losing time I would say the yellow jersey will belong to him.

Tadej Pogačar – the youngster now has two stage wins and sits just 40 seconds behind the yellow jersey. This stage is the day where he can try and put Roglič under pressure, and he knows it. With the final 5km averaging around 10%, it is possible for him to attack and force Roglič into covering his move. Simply waiting and sprinting for the stage isn’t enough, he needs more than the 4 seconds advantage that scenario would likely give him. He must attack early and take his chances.

Ineos – they are now free to attack without any GC hopes, as we saw today. They managed to get Carapaz, Sivakov and Amador in the move, it’s great to see them free from domestique duties. I expect to see the same riders in the mix again, but also Michal Kwiatkowski. The Pole usually likes steep climbs, Ineos will be more than happy if he makes the move.

Warren Barguil – with Quintana out of the GC picture, it allows Barguil to attack. He seems to be slowly getting back to his best, after a tough couple of years. He’s a rider who knows what it takes to win stages in this race, his experience could be crucial in the fight for the break. This experience also means he has the stamina to hit consecutive breaks, something that is very hard to do.

Thibaut Pinot – still recovering from injury, but he would have quit if he didn’t think there was still a chance of winning a stage. Pinot often saves his best performances for when he’s out of GC contention, this is something he seems quite used to!

Marc Hirschi – tried to make the move today, but it wasn’t to be. We’ve already seen that he’s climbing better than most riders in his race. I would expect Team Sunweb to throw all their resources behind him making this break, he’s their only proper chance of taking a finish like this.

Another day for the break, I just don’t see any team strong enough to chase it down, apart from Jumbo-Visma. I’ll take the new superstar, Marc Hirschi, to take the stage. In the battle for yellow, I think Primož Roglič will gain time on everyone, even Tadej Pogačar.