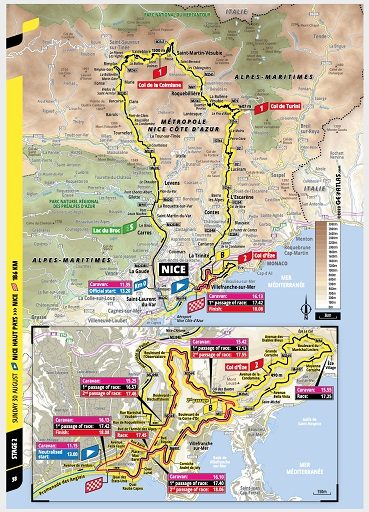 It might only be stage 2, but we head to the mountains. 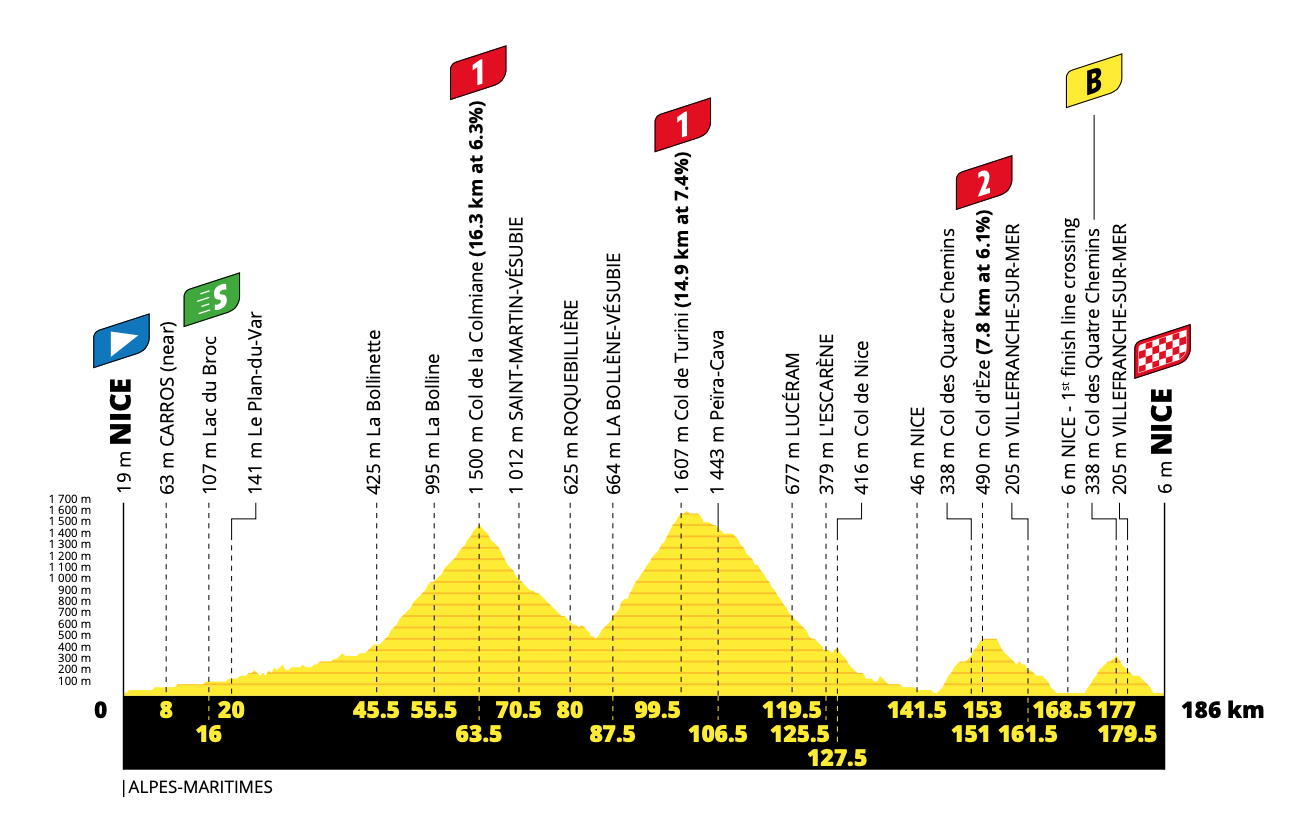 You might be mistaken for thinking this was the Vuelta, it seems that the organisers of the Tour have gone all Spanish on us. With a huge amount of climbing in the stage, this is a day where the GC riders need to be on their guard.

First up is the Colmiane, which is 16.3km at 6.3%. Not the hardest climb in the world, but the length makes it tough. A short descent follows before the main event of the day.

The Turini is 14.9km at 7.4%, it is a very demanding climb and would normally be classified as HC. The crest comes with 86km still to go, which is a long way from home. This means there won’t be any big attacks from the GC group.

The descent of the Turini has been talked about in the media as the riders have complained about the amount of loose gravel on the road. They have threatened to neutralise this part of the race unless the organisers sweep the road. We’ll have to wait and see what happens, but if the bunch go slow the break will win.

Col d’Èze is a very well-known hill, thanks to Paris-Nice. With many riders staying in the tax haven of Monaco, it is a road that most use on a weekly basis for training purposes. 7.8km at 6.1% isn’t that hard, and with 30km still to go it doesn’t really scream attack to me.

The last climb of the day is Col des Quatre Chemins, which is only 5.1km at 5.4%, but it also has a bonus sprint at the crest. It might look familiar as it’s the Col d’Èze climb, just not to the top. With just 9km to the finish, some riders will want to use this as a launchpad before screaming down the wide descent.

Given the bunch will likely be relatively small, the finish is relatively easy.

There is still a threat of thunderstorms around in the morning, but it should be nice and sunny for the race. Hopefully all the descents are dry.

This is a fascinating stage. Too hard for the sprinters, not hard enough for the GC riders. As Thomas De Gendt once told me, this is exactly when the breakaway riders sit up and take notice. Not only is the stage up for grabs, so is the yellow jersey. Many top GC riders have publicly announced they are chasing stages, not a good GC result, but they won’t be given freedom by the big teams. No way will the likes of Yates, Alaphilippe and Bardet be allowed to get in a break that wins by minutes, they are far too good in the mountains.

The management of the early break will be crucial. Big teams might not want these guys in the break, but sometimes it’s not easy to get what you want. I also need to consider some teams worried about the race ending early, will they want to be in yellow just in case the race ends in the opening week?

What about the sprinters? This stage is far too hard for the pure sprinters, but maybe not riders like Sagan and Nizzolo. The big climbs come in early part of the stage, usually the pace is slow at this point. If this happens, the big moment of the race will be Col d’Èze, which is a climb some of the quick men will fancy getting over.

A lot of the pressure will be on the shoulders of QuickStep. This is a brilliant stage for Alaphilippe, as he has the sprint required to win from a small group. They know he can’t beat the likes of Sagan and Wout Van Aert, that means they need to race the Turini. The other option for them is to get a rider in the break and see what happens, but Alaphilippe will want another yellow jersey, which complicates things.

Julian Alaphilippe – this stage screams Alaphilippe, but does he have the form? The lockdown was hard for the Frenchman, he isn’t a fan of the turbo. He also had to deal with the death of his father, which couldn’t have been easy. Since returning to racing he’s had some good days, but also bad ones. This is not an easy stage to control, QuickStep will need help to chase the break down. If they manage to do this, I’m interested to see if Alaphilippe will go on the attack on the climbs, or wait for the sprint. If he waits for the sprint it opens the door to a late attack, especially if the bunch is small. It might look like a great stage for him, but it’s not going to be easy.

Sergio Higuita – the little Colombian has the fastest sprint of the pure climbers, but he’s slower than Alaphilippe. This is a great opportunity for him to challenge for a stage, but also move into the white jersey. Winning will require a mistake from Alaphilippe, or a touch of genius.

Wout Van Aert – this is complicated. The following things need to happen to even allow Van Aert to sprint: the break has to be caught, the pace on the early climbs needs to be relatively slow so that Wout doesn’t have to work on the front, no GC attacks on the Col d’Èze and finally all his GC riders sitting pretty at the end of the stage. If all the planets align, he’ll have his fun. Given his current form, this is a stage that he could win, but riding for a GC team at the Tour de France means personal sacrifice.

Peter Sagan – if this was any other year, he would start as the big favourite for this stage. The problem is that he’s looked a shadow of himself in preparation races. Given his pedigree, he cannot be written off, but it would be a surprise to see him there at the end. Also, his team is full of injured riders, he won’t have a huge amount of help during the stage.

It looks like a great stage for the break, but coming so early in the race complicates matters. I’ll go for QuickStep managing to get the right break up the road, controlling it, and setting up the win for Julian Alaphilippe.