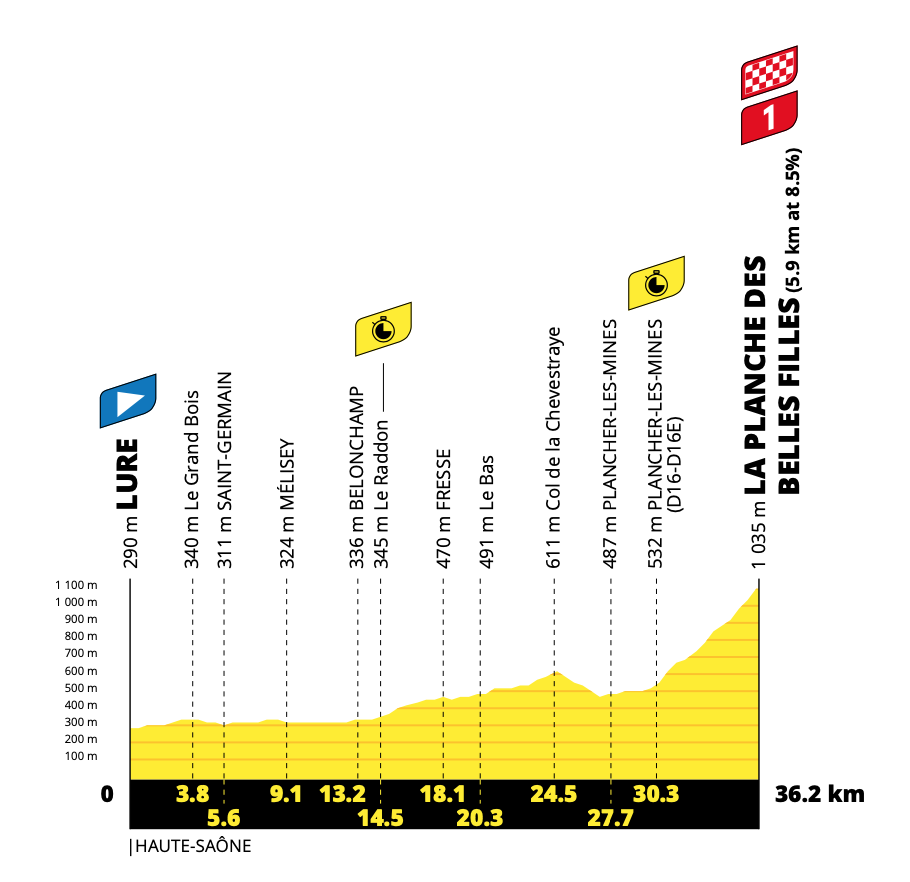 The GC race ends with a very demanding time trial. We have 14km of flat, then 10km at 2.6%, before a short descent. Then there is a little bit of false flat before Planche des Belles Filles.

A climb we all know well. 5.9km at 8.5% is a very tough way to end a Tour de France, especially in a TT. There will be no hiding place, the strongest rider will come out on top.

If you want to change bikes, at the foot of the climb, it needs to be from one on the team car. The mechanic is then only allowed to push you for 5 seconds, get out your stopwatch! If you want to win the stage, you’ll change bike.

The climb has been categorised as a cat 1, which means 10-8-6-4-2-1 points at the top. Crucially, the organisers have decided that the points will go to those who do the climb the fastest, not the full TT. Ricky Carapaz currently has a 2-point lead over Tadej Pogačar, he has the luxury of taking it easy for the vast majority of the TT, then smash up the climb. This means he’ll claim the polka dot jersey, a fine reward for his performances in the final week.

I hate when different forecasts contradict each other. Some sites are saying cloudy, with a strengthening wind throughout the day, which will be headwind for most riders. Other sites are saying there will be a risk of thunderstorms and the wind will be quite strong. As the forecasters can’t agree, I have no chance!

Primož Roglič – with 57 seconds over his nearest rival, the Slovenian is in a very comfortable position. He did lose the Slovenian TT race to Pogačar, but that day there was lots of rain around and he took no risks. Roglič will start as the overwhelming favourite to take the stage, he is climbing incredibly well and is a beast on the TT bike. One slight worry for him will be his performance in the final TT two years ago, when he surprisingly fell off the podium.

Tadej Pogačar – very strong against the clock, particularly when going uphill. The problem for him will be the long section before the climb, this is where he’s likely to lose time to Roglič. I doubt he’ll win this stage, but he should be on the podium.

Tom Dumoulin – this will be an interesting marker for him with the Worlds fast approaching. Dumoulin has performed well in the race, especially when you consider how much racing he’s missed in the last year. He should now be feeling much more like his normal self, which means he has to be a contender for this stage. He’ll have eyes on Uran and Yates, who sit directly ahead of him on GC. He needs 1:30 on Yates and 1:19 on Uran to move up to 7th on GC, I think he’ll be able to do this.

Thomas De Gendt – it’s not been the race he’d hoped for, but never write him off. His recent performances in grand tour TTs is very good, I expect to see him in the hot seat.

Kasper Asgreen – another who’s been quiet throughout the race, maybe saving himself for this day. The Dane is very strong against the clock, but challenging the GC contenders for this stage will be very hard. If he’s managed to save enough energy, we’ll see if he can get on the podium.

At this point in the race, a TT is usually won by a GC rider. Looking at the route I think Primož Roglič will win the stage and seal the yellow jersey, with Pogačar and López rounding out the podium. Porte will finish in 4th, with Enric Mas moving up to 5th at the expense of Mikel Landa.