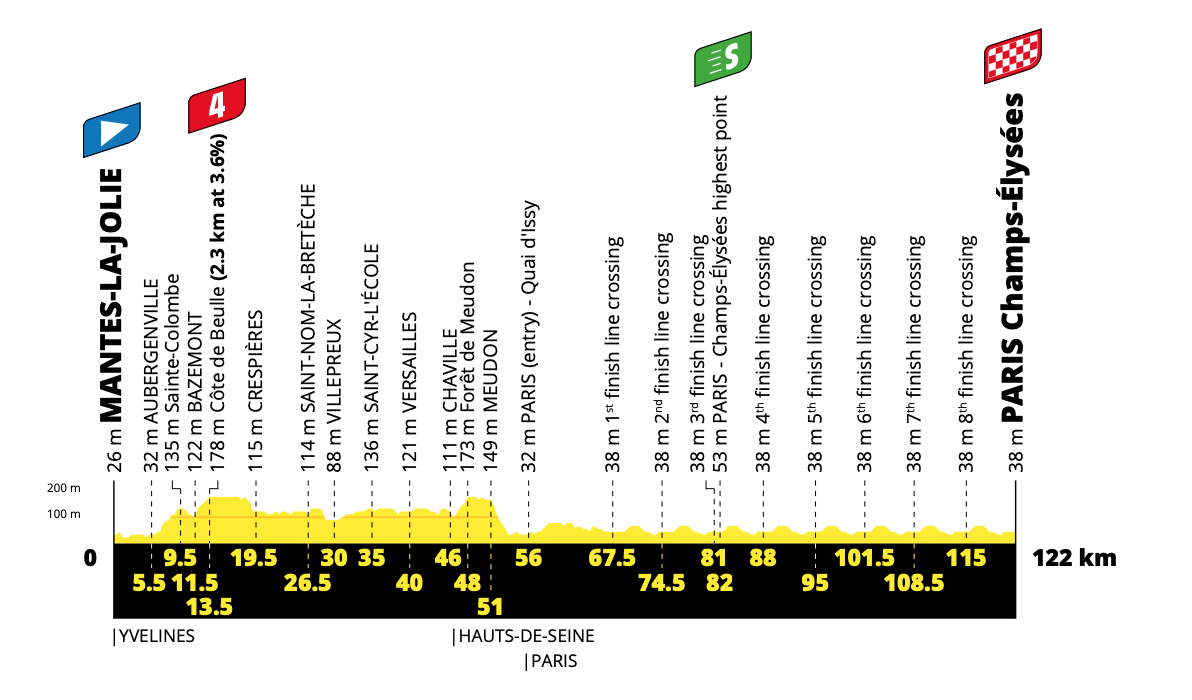 Once we get the champagne out the way, the riders can start preparing for the sprint finish.

A nice day to finish off the race.

We all know this one well. You must be in position for the tunnel which comes just inside the final 2km. From there it’s all about holding that position through the Concorde, especially as some riders always try to nip up the inside. Once onto the Champs-Élysées there is 350m to go, which means you really need your final man still in front of you. Saying that, Dylan Groenewegen won in 2017. after launching his sprint from 300 to go, but not many are strong enough to do this.

Sam Bennett – the Irishman will start the stage as the big favourite. To win the green jersey he only needs to finish the stage, this means he doesn’t have to worry about Sagan during the stage. QuickStep still have all eight riders, which is a big advantage over Lotto Soudal. Expect to see Asgreen, Jungels and Alaphilippe pulled into the sprint train to give it more depth. In the closing stages it will be over to Mørkøv to expertly guide Bennett into position and I think he’ll launch his sprint from a great position. We’ll then have to see how much speed he’s got left in his legs after a very demanding three weeks.

Caleb Ewan – won here last year, but the last week has been a struggle for the Aussie. With just four teammates, Lotto Soudal need to be clever about when they start working. They should hold back and only start to get involved in the final 5km. Their train might be short, but Frison, Kluge and De Buyst are brilliant and Caleb will be in a good spot for the sprint. I’m not sure what to expect from him in the sprint, I think he doesn’t know either. Given his efforts in the last week, I don’t think he’ll be at his best.

Cees Bol – Sunweb have enjoyed a brilliant race, they’d love to round it off with another win. They have an excellent sprint train, but they haven’t always got it right in this race. The big man is sprinting well, but this is the first time he’s completed a grand tour, we’ll have to see how his legs react at the end of the stage.

Alexander Kristoff – experience goes a long way in this finish. He won here in 2018 and would love to follow up his win in the opening stage with a win in the closing stage. While some sprinters will have struggled through the mountains, Kristoff would have been able to cope a little better. Don’t get me wrong, it would still have been hard for him, but he manages to maintain his sprinting speed even when fatigue is setting in.

Mads Pedersen – after babysitting Porte for last few stages, he’ll be back looking to win a stage. This will be his last race in the rainbow jersey, seeing him win on the Champs-Élysées would be amazing. With Theuns and Stuyven to lead him out he’ll be confident of repeating his success in the Tour of Poland.

Power sprint after a hugely challenging three weeks, when everyone is knackered, you got to love the Tour de France. I think we’ll get a small surprise and Mads Pedersen will take the win.

A massive thank you to all who have read my previews over the last three weeks. We have broken all previous records in terms of views, in both English and Spanish. It is very humbling to see how many people are actually reading them, be that fans, riders and DSs. As usual, respect to Pablo Palermo for translating the previews into Spanish.

I know I make a prediction, and I always will, but that’s not the most important part of the preview. For me, it’s all about trying to frame the race for you, in order to enhance your viewing experience. Hopefully I’ve managed to do this. Remember, cycling is not just about the Tour de France, I’ll be back for the World Championships next week. Vamos!