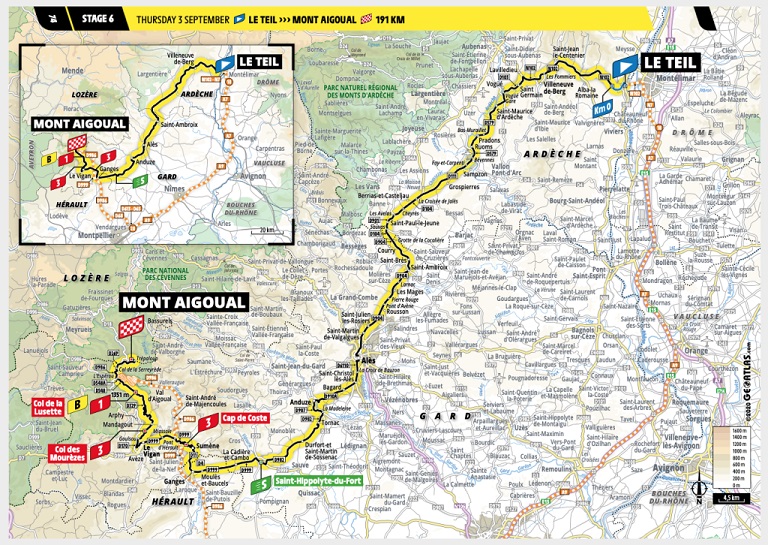 Another day for the climbers. 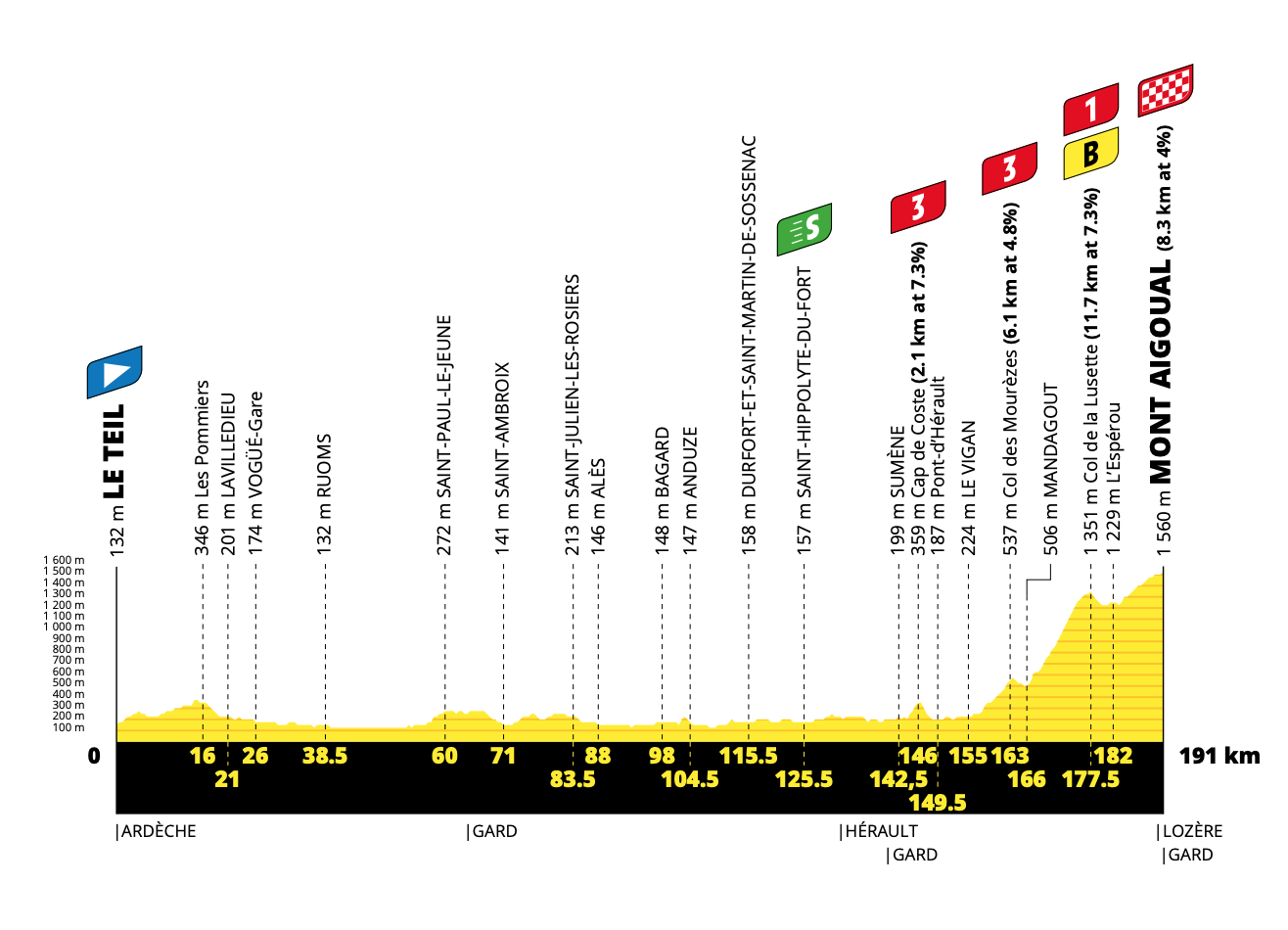 Pan flat for almost the whole stage, then we hit the final 50km with a couple of cat 3s before the big moment of the day.

Officially classified as 11.7km at 7.3%, this has only been given cat 1 status, it must have been very close to HC. La Lusette is a horrible looking climb, with inconsistent gradients. About 8km in, the riders will have to tackle a kilometre at 12%, it’s super tough. At this point the road is narrow and has a rough surface, making the climb even harder than usual.

After a very short descent we begin the gradual grind up to the line. Not overly hard, but it all depends on how many riders are actually left in the front group.

Another sunny day with hardly any wind.

Who wants to chase the morning move? Mitchelton-Scott are now in yellow after a rather harsh time penalty for Alaphilippe. Their attitude will be interesting, I think they’ll be happy to see a break disappear down the road, as long as there isn’t a GC threat in it. Do they want to chase all day and burn riders before the big climb? All eyes will be on Jumbo-Visma, they are the dominant team. How Jumbo-Visma approach the climb will also be interesting, as they’ll want to keep Kuss for long drag up to the line. That means I can’t see them going super-fast up the cat 1 climb, but that’s just my hunch. All things seem to suggest a good day to be in the break. We do start with a slight climb, 4km at 3%, but that’s not really hard enough for the mountain goats to sneak away, it should be one for the puncheurs. It is still possible for a few climbers to get in the move, but they’ll need help from teammates and a handful of caffeine gels!

As I’ve mentioned, as the cat 1 climb isn’t the final hill of the day teams will have to be a little conservative when climbing it. Jumbo-Visma will want Kuss, Roglič and Dumoulin to still be in the front group for the rise to the finishing line. Other teams with strong domestiques will also want to save them for the final rise, it makes the cat 1 climb a little complicated. Will a team take up the pace and try to drop Kuss? This will be very hard, but someone has to try.

Alexey Lutsenko – at 5:50 down he’s lost just enough time to get some freedom. The Tour was his number one target from the start of the year, but his form since racing returned hasn’t been great. As one of Astana’s favoured sons, he should be allowed to chase personal glory and not have to help López. He has the climbing ability required to cope with the cat 1, and the sprint if a small group approach the line together.

Thomas De Gendt – by his own admission his legs haven’t been great so far. I did notice that he tested his legs a little on Tuesday, I know he might have only finished 41st but it was a sign he was looking to kickstart his legs. He has the ability to make the morning move, and he has the class to finish the job off.

Nico Roche – he finished 7:04 down today, it looked like a mission to deliberately lose some time. Roche has been climbing well, he was in the front group on Tuesday until very close to the line. At 36 he’s now in the veteran category, but with that comes valuable experience. Sunweb will try to make the morning move, but will he make the split?

Lenny Kämna – came into this race off the back of a brilliant win at the Dauphiné, but unfortunately crashed on Col d’Èze. He now sits way down on GC, but his approach to this stage will depend on team tactics. With Buchmann riding high on GC, Bora will have to decide if they can risk any of their men in the morning move.

Ben Hermans – approached this race in okay form, 9th in Lombardia was a decent result for the Belgian. ISUN have been active in this race, you can bet they’ll try everything to make the breakaway. If he makes it, Hermans has the ability to finish off the job.

Primož Roglič – if it all comes back together, Roglič will obviously be the favourite. His sprint finish is very strong, and his team will ensure the front group is small heading into the closing kilometres. If he takes another win, the rest of the peloton should just head home.

Tadej Pogačar – came close to beating his countryman on Monday, but he started his sprint from too far back. The youngster does have the sprinting speed to upset Roglič, but it would be close. He does seem to have hit form at the right time, I bet he can sense a chance to move into the yellow jersey.

Adam Yates – very strong just now, but it will be almost impossible to escape the clutches of Roglič and Jumbo-Visma.

I think this is a day for the break, but expect a proper fight to join it. Remember, picking the winner from a breakaway stage is like winning the lottery twice, but I need to try! A win for Alexey Lutsenko. Back in the GC group, I’d be surprised to see gaps between the top 5-10 riders.