After fun in the mountains, we have another stage for the fast men, but the breakaway riders might have something to say about that. 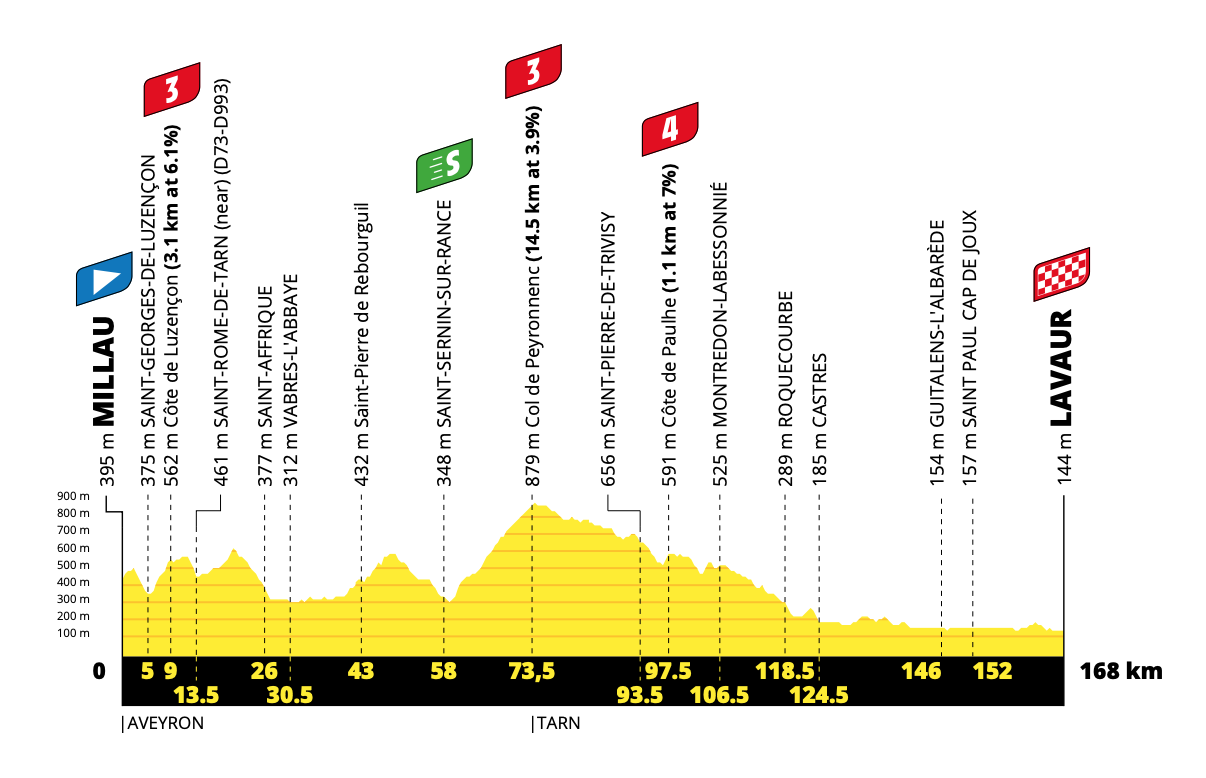 The start of the day is complicated for those who want a small break. We head straight into 1.3km at 7.1%, before a short descent which leads into the opening cat 3 climb of the day. This is a nightmare for the sprinters, no way a small group simply rolls off the front. The opening 95km only contains around 12km of flat, this isn’t easy for the domestiques to control. After this we have a very long descent, the road doesn’t really flatten out until the final 40km. How big will the breakaway be? What will their gap be at this point? Crucial questions that will decide whether or not the sprinters have their fun. 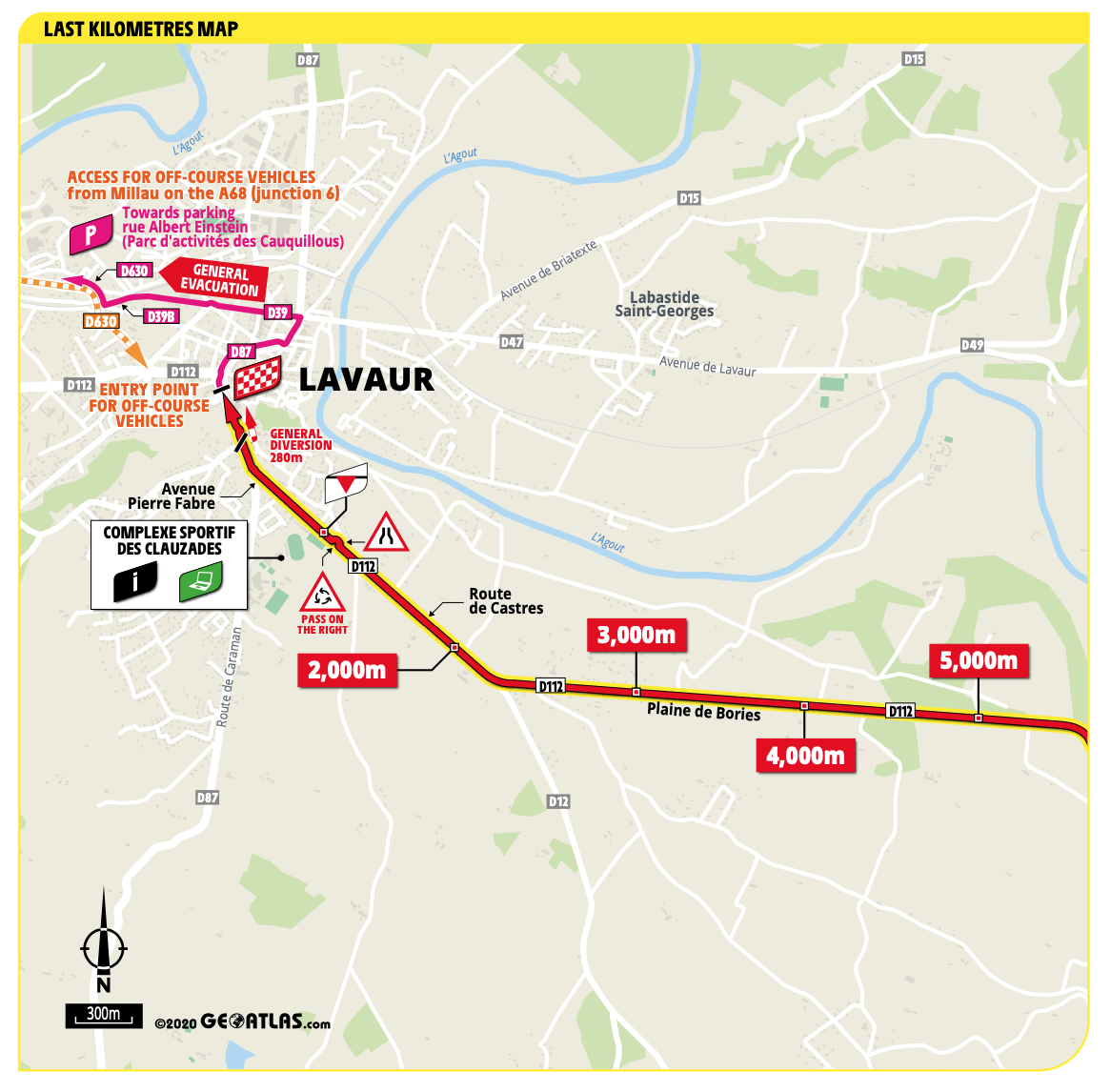 Just like on Monday, the road heading towards the finish isn’t the widest, especially given the stature of the race. Apart from that the final 10km is quite straightforward, but that all changes at the flamme rouge. The road narrows down to one lane as the bunch fly through the right-hand side of a roundabout. A poor position here and it’s game over. There is also a pesky looking roundabout around 250m to go, which doesn’t feature on the roadbook. Just like on Wednesday, expect to see a rather crudely laid piece of tarmac through the centre of the roundabout, but I’d still want a team member to check the finish to make sure.

This is where it gets interesting. We have a sunny day, but a strong breeze of around 37km/h. It is coming from the south-east, which presents a wonderful opportunity to split the bunch. The opening 130km is sheltered from the wind, but once the bunch leave Castres, at km 132, it’s a cross/tailwind until they reach the town of Guitalens, at km 147, and the road is narrow and exposed. This 15km section will be chaos, there is enough wind to split the bunch. The rest of the stage continues with a cross/tailwind, but most of the roads after Guitalens are well protected from the wind, but not all of them. This sprint stage could well turn into a GC day.

With limited opportunities for sprinters in this race, we’ve seen all sprint stages very controlled. This could be the day when that changes, but teams like Lotto and QuickStep will still be keen on a sprint. The tough looking start is perfect for the attackers, but it really does depend on the attitude of the Belgians. If a group of around eight riders get away, it will be hard to stop them from winning. We’ve seen in previous days that not many teams have been willing to help with the chase, with QuickStep already having worked hard and Lotto down to six men, the attackers will smell blood.

The big problem facing the breakaway riders is the threat of crosswinds. An advantage of four minutes can disappear in almost a heartbeat, I bet the attacking riders are cursing the weather forecast.

Caleb Ewan – riding with a shortened sprint train is never easy, you can find yourself in poor position and then it’s all over. Ewan has done remarkable well in this race to remain near the front of the bunch, but this weakness was exposed on Wednesday. As the finish is flat, he stands a much better chance of being near the front of the peloton in the closing kilometres. Without doubt, he’s the fastest in the race, but that doesn’t guarantee wins, sprinting is much more complicated than that. If the wind blows Caleb is very good at riding at the front, but without a lot of teammates he could find himself isolated.

Sam Bennett – now in the green jersey, but still searching for his first Tour de France win. The likeable Irishman is a fantastic sprinter, and he does have a solid sprint train with him. As I’ve pointed out in previous previews, the train isn’t at its very best, but it’s still strong enough to get him into good positions. Bennett needs to keep believing in what he’s doing, and the win will come. I think we’d all be delighted to see him cross the line first and take his maiden win. If the wind blows we could see Bennett having to ride for Alaphilippe, which would be a shame.

Cees Bol – back at the turn of the year, the big man made it into my riders to watch in 2020 list, and I made the bold statement that he would become one of the best sprinters in the world, now you see why I said that. Bol is a huge talent, not only is he fast, but he handles hills well. At this race Team Sunweb are the team with the longest sprint train, which naturally gives them an advantage over their rivals. As they don’t have any riders targeting GC, they can throw all their resources behind Bol in the sprint stages. If they continue to put him into good positions, he will get the big win. The big man loves the wind, he’ll be looking forward to the thought of echelons.

Wout Van Aert – has his stage win, and with a big weekend in the mountains ahead I think he’ll be happy to sit in the bunch and protect Roglič, especially if the wind blows.

Trek – all three of the Trek boys love the wind. Expect to see them right at the front looking to blow the race apart, but I have no idea which of their riders will sprint.

As soon as the GC teams see the forecast, they’ll be keen on keeping the break in check. The sprinter teams will also assist with the chase, but when the wind blows we’ll need to see if they survive. Ineos will sense a great opportunity to put Roglič into difficulty, remember that Bernal is brilliant in an echelon, but Roglič can sometimes be found out of position in the bunch.

When the dust settles, I think we’ll see Sam Bennett win his first Tour de France stage. Yes, he might have to do some work for Alaphilippe, but it’s late in the stage and he should have enough to win.