Another day in the Pyrenees. 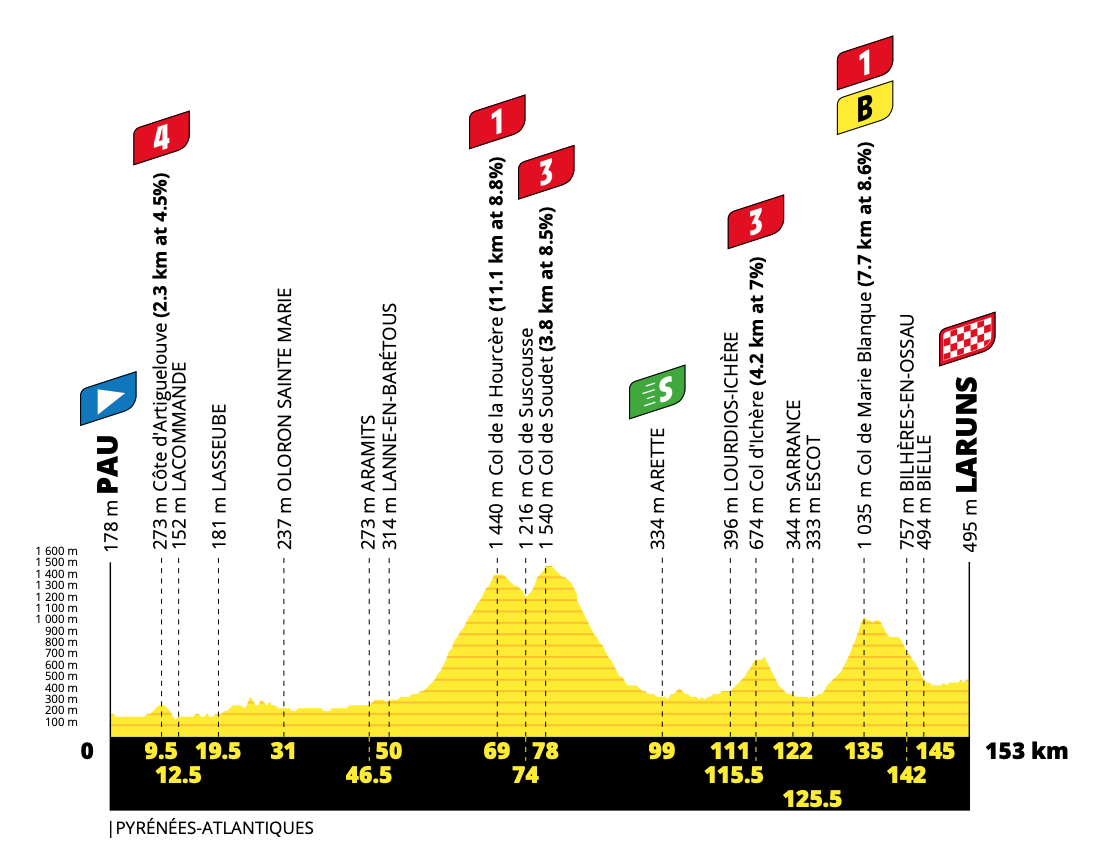 On paper, this is an easier stage compared to today, but it’s still a tough day in the saddle. We don’t have any HC climbs, and there is a lot of flat in this stage, but it should still be a big day in the battle for the yellow jersey.

Col de la Hourcère is 11.1km at 8.8%, which sounds horrible. The climb is at its steepest at the bottom, with some double-digit gradients.

Col de la Marie Blanque is officially classified as 7.7km at 8.6%, but I’ve chosen to show you the final 4.3km which averages a jaw dropping 11.3%. The crests comes with 18.5km to go, which would normally put off riders from attacking, but the climb is so steep riders will want to have a go.

Sunny, but not too warm.

When will the break go? The climbers will hope to use the early cat 4 climb as a launchpad, it is 2.3km at 4.5%, which is good news for some. This climb comes after just 7km, so the break shouldn’t have been established before it.

The profile is usually one that would favour the break. The gap between the final climb and finish is around 20km, that would normally stop the GC riders from chasing down the morning move. After the GC teams took it easy today, I do wonder if they’ll want to fight for the stage win. Lots of teams don’t have a win yet, if they want to change that they’ll need to work.

Mitchelton-Scott are still in the yellow jersey, which clearly means another good day for the break. The Aussies have zero interest in chasing the move, it’s up to other teams. Jumbo-Visma already have three stage wins, they really don’t need to chase. Today we witnessed the first bit of weakness from them in quite some time, with their brilliant domestiques having an off day. Saying that, they were still better than most others. Will UAE chase for Pogačar? They look the best option, but they don’t really have the riders to chase all day.

Once we get onto the final climb it will be carnage. The yellow jersey is there for the taking, and the 4.3km at 11.3% will see the strongest riders come out on top. Today got quite tactical, I expect a power show from Roglič once we hit this section. Will anyone else be able to follow?

Primož Roglič – I’m expecting big things from him in this stage. Already with a stage win, there isn’t a huge urge for the team to chase the morning break. The Slovenian knows that he can wait until the final climb before launching a huge attack in the hope of taking yellow. If another team chases down the break, he’ll have the extra motivation of another stage win.

Tadej Pogačar – managed to claim back forty seconds today, which puts him right back in the fight for the podium. He will enjoy the steep slopes of the final climb, and won’t mind working with Roglič to fight off the other contenders. Pogačar really is a sensation, but to win this stage he’ll need a huge effort from his team and then his best ever legs.

Nairo Quintana – it was great to see him looking at his best today. I think we can finally forget about his knee injury and start to show some faith in him. Quintana will sense a real opportunity to claim the yellow jersey, after coming close before. He will have to play a clever tactical game, but he has the experience required to compete with the very best. Unfortunately, the finish isn’t ideal for him.

It looks like another day for the breakaway, but picking the winner won’t be easy! After chucking away a whole heap of time today, I’ll go for Julian Alaphilippe, the profile is perfect for him. Back in the GC group, Primož Roglič will dominate the final climb and take the yellow jersey.